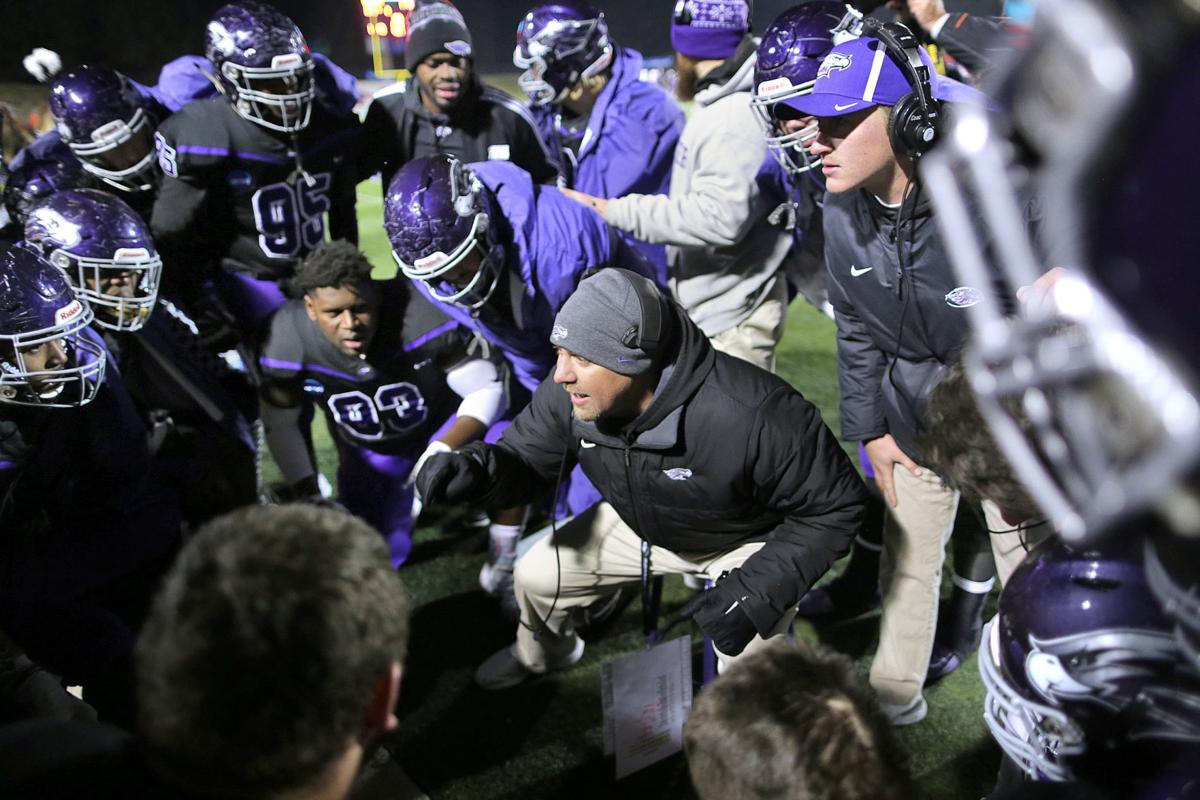 UW-Whitewater’s defense gathers around coordinator Rob Erickson in the final seconds after securing a 35-32 victory over St. John’s in their NCAA Division III national semifinal playoff game at Perkins Stadium in Whitewater on Saturday, Dec. 14.

UW-Whitewater’s defense gathers around coordinator Rob Erickson in the final seconds after securing a 35-32 victory over St. John’s in their NCAA Division III national semifinal playoff game at Perkins Stadium in Whitewater on Saturday, Dec. 14.

Erickson was a finalist for the UW-Whitewater head coaching position when Lance Leipold left the Warhawks after the 2014 season to become head coach at University at Buffalo.

Bullis was hired as the head coach and, because Leipold took most of the staff with him to coach the Bulls, Bullis and Erickson put together a coaching staff that has largely stayed intact over the last five seasons and amassed a 57-9 record.

South Dakota State is an NCAA Division I FCS program that plays in the Missouri Valley Conference. In 2019, the Jackrabbits lost 21-14 to Minnesota. In 2020, they will play Nebraska in Week 2.

“I had an itch to coach at the scholarship level, and it was an itch I felt like I needed to scratch,” Erickson said in a phone call Monday night. “The hardest part of leaving is the relationships we made at Whitewater. It’s tough leaving a place you feel respected. You have those deep relationships, and it’s tough knowing that you’re leaving such a tradition-rich school.”

Erickson made the decision to accept the position in February.

“Rob is a very good friend. I’m very indebted to him,” Bullis said.

“Five years ago, Lance takes the whole staff and offered me an opportunity to go with. I didn’t go with, instead I stayed back and had to build a staff. I didn’t build the staff by myself. Rob Erickson was a key piece of that. You’re going to miss a great teacher, and that’s ultimately what he is. I’m excited for him. …

“When someone gets an opportunity to go DI, you have no choice but to smile and be happy for them.”

Rindahl, a former Cambridge athlete and UW-Whitewater linebacker, previously coached linebackers and was run defense coordinator. He was named Wisconsin Football Coaches Association college assistant coach of the year in 2018 and has coached the Warhawks since 2015.

Cortez has coached the defensive line since 2016.

Reaching out and reassuring recruits is a major priority with Erickson leaving the program, Bullis said.

“Ultimately, it’s connecting with all the kids that he recruited and reinforcing to them that the program is bigger than any one person,” Bullis said. “When we recruit, we sell the program ultimately. Rob develops a relationship with those young men, but it’s UW-Whitewater that we’re recruiting them to. Whether it’s me or whomever else, that’s the great history of this program which proves that.”

Now, he will shift into a role of coordinating special teams and coaching cornerbacks.

“When you’re a coordinator, whether that’s offense, defense or special teams, you have to be able organize people, understand techniques and how they’re installed,” Erickson said. “You have to put together practices understanding how to use three minutes here, 16 minutes here and understand how to get people on the same page and coordinating everyone involved from players to coaches.

“Through the interview process here, they must have felt strongly enough in my ability to organize players and to organize overall.”