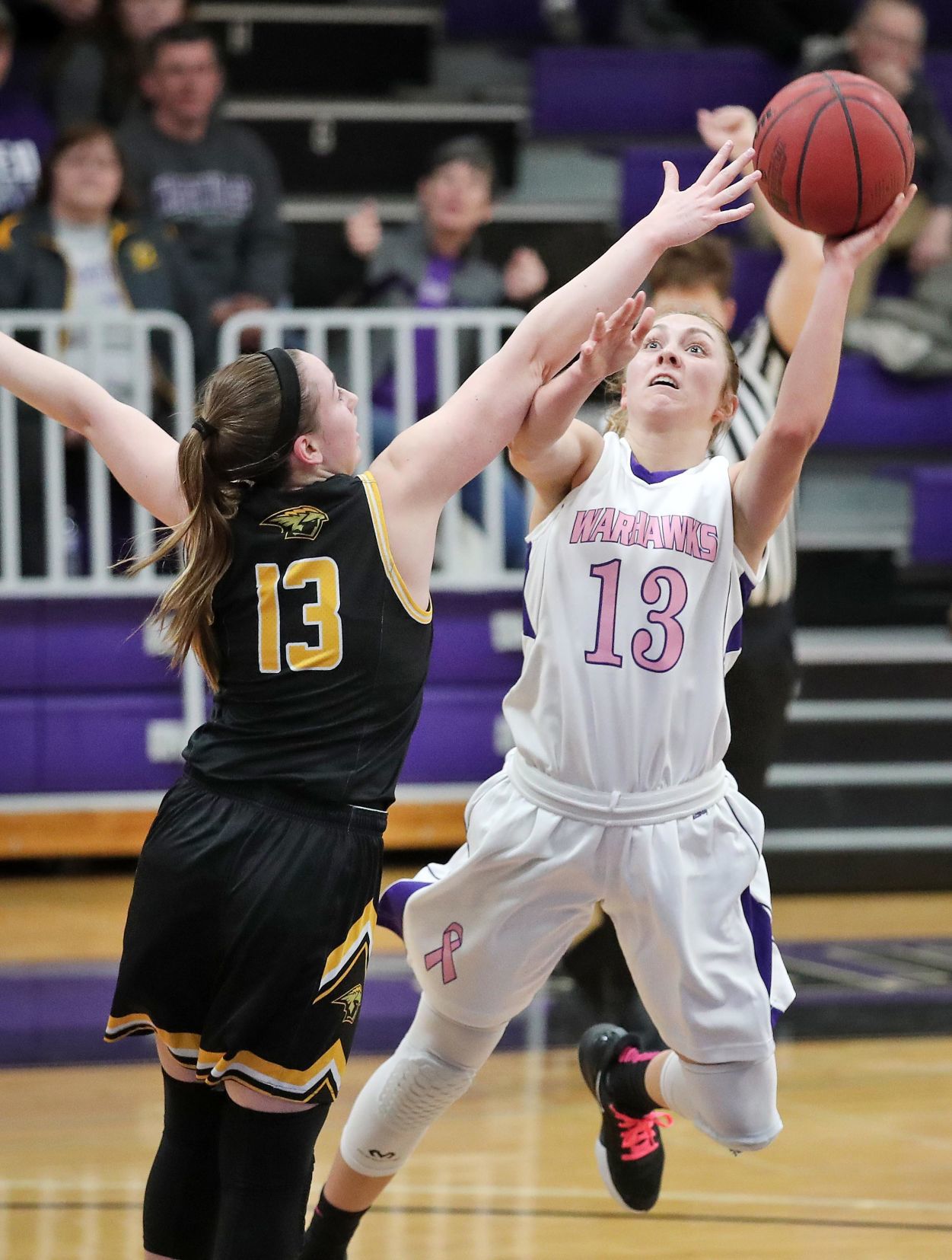 UW-Whitewater’s Becky Raeder tries to shoot over UW-Oshkosh’s Katie Ludwig during their game in Whitewater on Wednesday, Feb. 19. 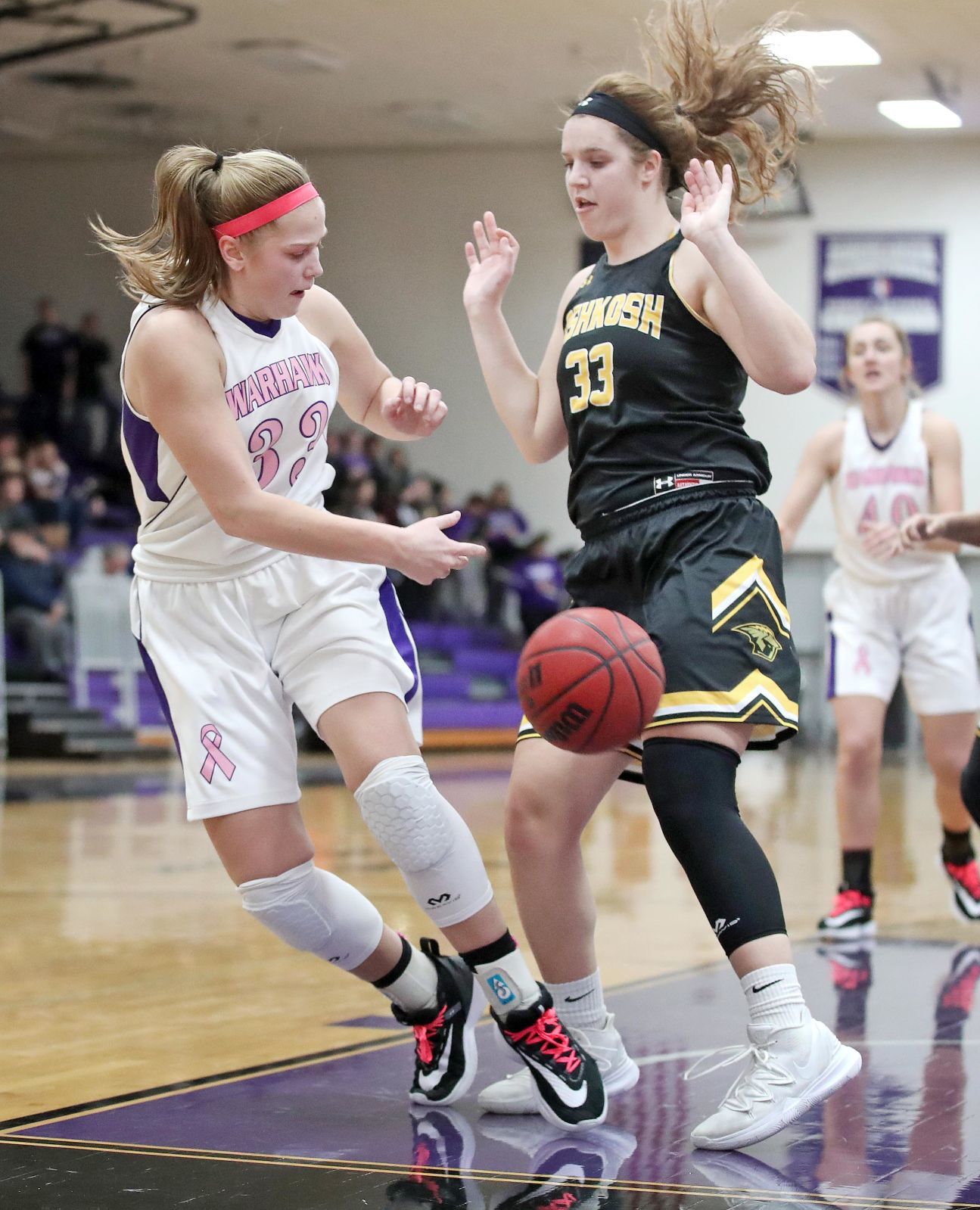 UW-Whitewater’s Becky Raeder tries to shoot over UW-Oshkosh’s Katie Ludwig during their game in Whitewater on Wednesday, Feb. 19.

How hard is it to sweep the Wisconsin Intercollegiate Athletic Conference women’s basketball regular-season and tournament titles?

UW-Whitewater coach Keri Carollo is an expert on this topic.

Carollo has coached three teams (2008, 2013, 2014) that made it to the NCAA Division III Final Four in her 18 seasons at Whitewater. Those squads never won both league crowns.

The 2017-18 team was the first and only group in program history to win both conference titles.

The Warhawks went 13-1 in WIAC play this season to earn the outright regular-season title. They will attempt to make it a sweep when they begin their conference tournament play at 7 p.m. tonight when they host fourth-seeded UW-Oshkosh in a semifinal at Kachel Gymnasium.

UW-W is ranked No. 4 nationally and sits atop the latest Central Region rankings, so its spot in the DIII NCAA Tournament is essentially a foregone conclusion. But a rare sweep of the conference titles should keep the Warhawks motivated.

“Our team really doesn’t want to not accomplish their goals,” Carollo said. “Their goals this year were to win conference and win the conference tournament. So it’s definitely something we really want to achieve.

“This group has a lot of high expectations, so it’s not something they are overlooking.”

No. 2-seeded UW-La Crosse hosts No. 3 UW-Eau Claire in the other semifinal tonight.

The winners meet in the tournament title game Saturday. If UW-Whitewater is in the championship, it will host the game at 3 p.m.

To get there, though, the Warhawks will need to beat the team that has given them their toughest tests throughout league play.

Oshkosh handed Whitewater its lone league loss, 62-51, on Jan. 25 in the Kolf Center. The Warhawks have won seven consecutive games since, including a 75-71 victory at home in the rematch against the Titans on Feb. 19.

“They (Oshkosh) are playing really well right now, so it’s going to be another good test,” Carollo said. “They play five-out (on offense), so they don’t really have a true post player. From a matchup perspective, that becomes a little bit challenging for most teams against them.”

The Warhawks, with four solid post players, then must decide to either ask their bigs to either step out and guard the arc or opt to go with a smaller lineup that takes away some of their inherent advantages at the offensive end.

“Their post players shoot 3s, and they really spread the floor out well and attack hard off the dribble,” Carollo said. “If you don’t have that interior play to help kind of rotate on the drive, that makes it a tough matchup. That style of play is something we’ve seen in nonconference games, but most of our conference teams have more of a balanced attack.

“So it becomes a matchup challenge.”

Even so, Carollo said she will ask her players to focus on the things they have done well to get to this point.

“Really just be true to who we are and stick to the rules we have put in place that have gotten us to this point,” she said. “This time of year, it’s really all about just trying to slow down your opponent. You’re not going to stop anyone, because you’re playing really good teams at this point.”

Which, simply put, is why it is so hard to sweep the conference titles.

But UW-Whitewater will attempt to do just that over the next three days.