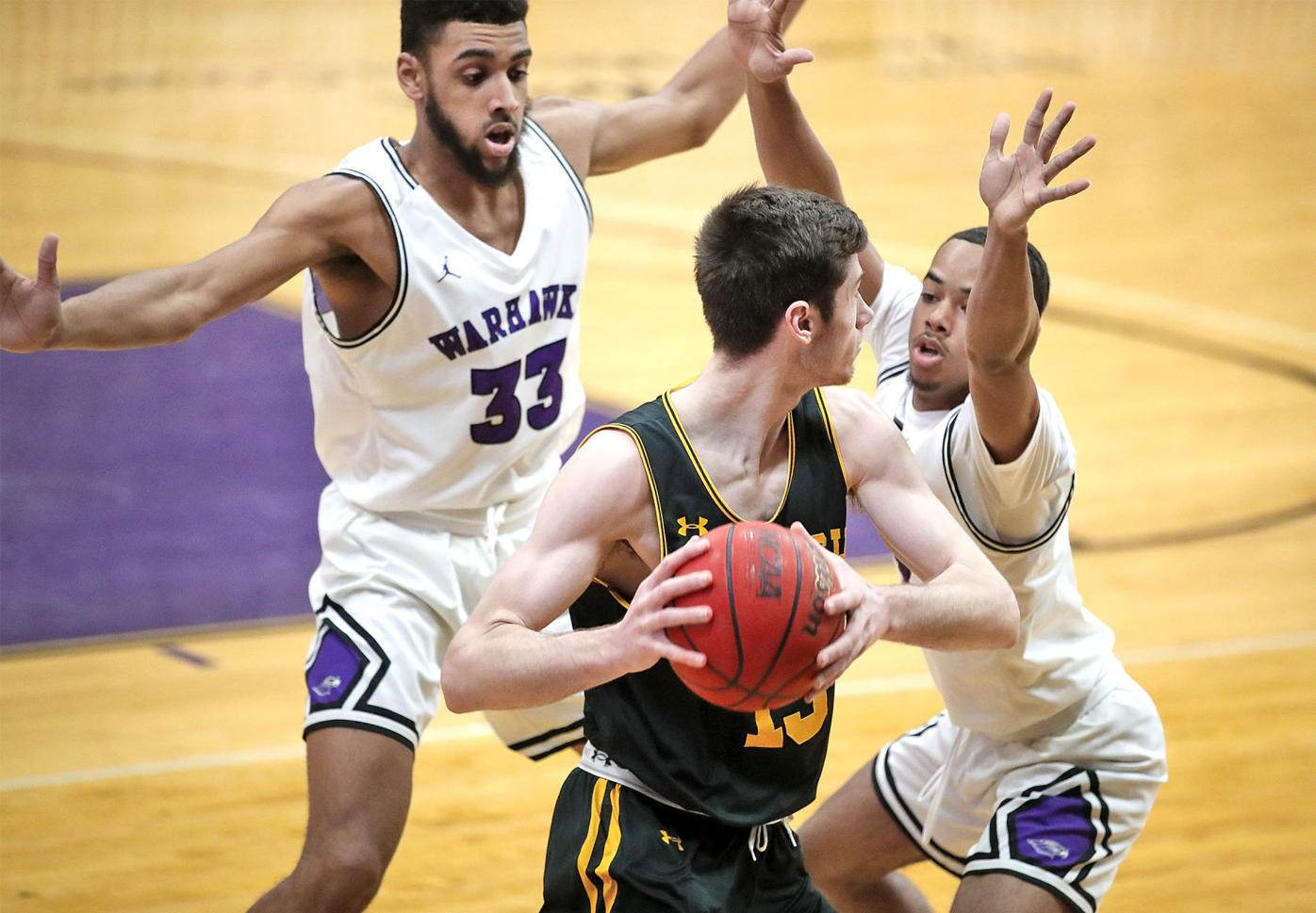 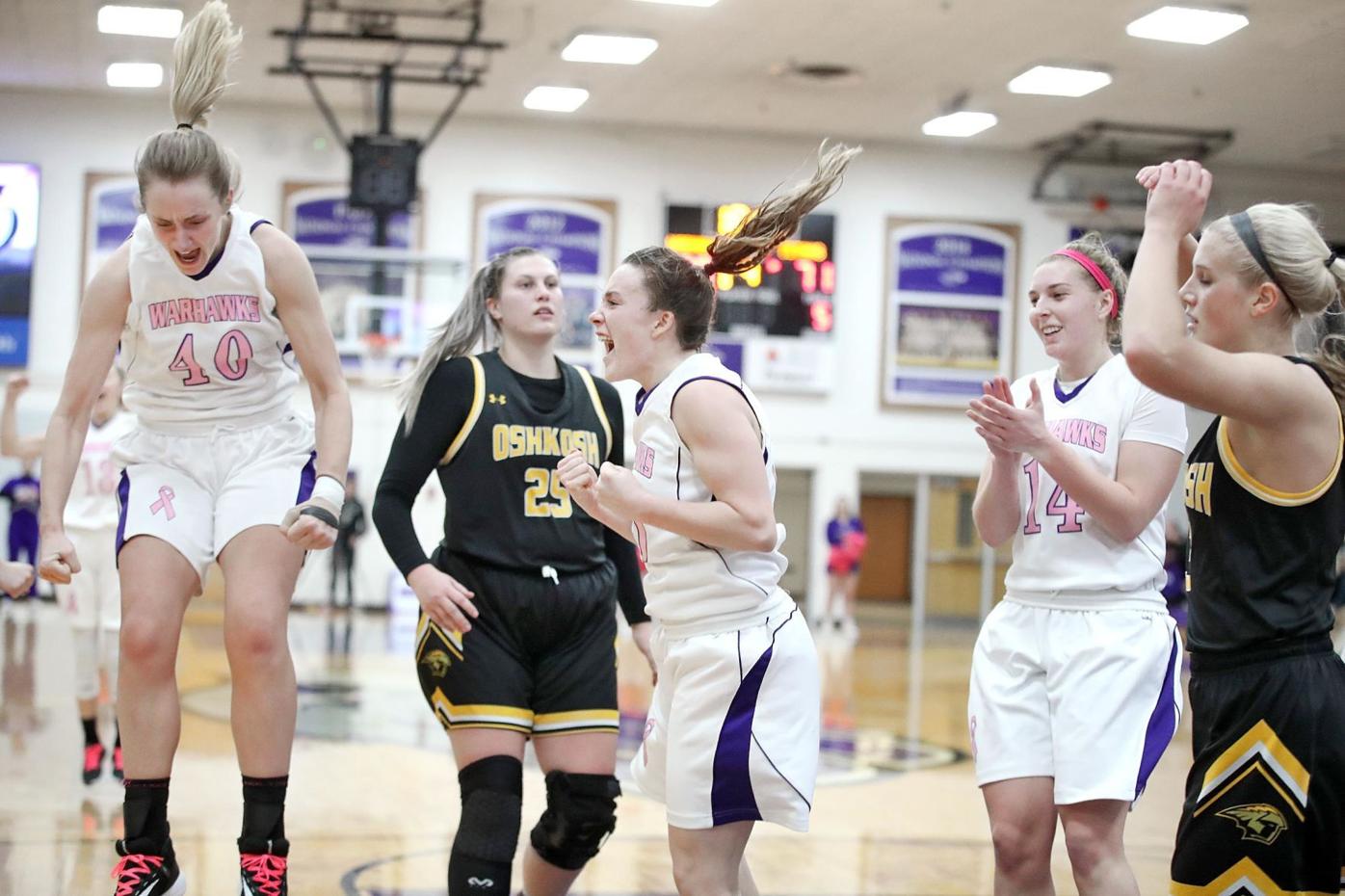 UW-Whitewater’s Veronica Kieres, center, celebrates after a made layup and foul on a pivotal play late in their game to help Whitewater defeated UW-Oshkosh 75-71 and clinch the WIAC championship outright on Wednesday, Feb. 19. 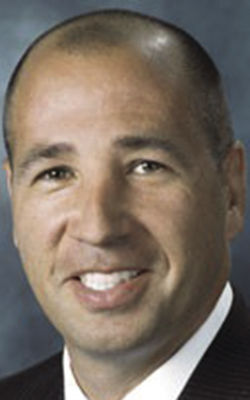 UW-Whitewater’s Veronica Kieres, center, celebrates after a made layup and foul on a pivotal play late in their game to help Whitewater defeated UW-Oshkosh 75-71 and clinch the WIAC championship outright on Wednesday, Feb. 19.

Given its intricacies, pinning down that information while also studying specific game plans was less than ideal.

With COVID-19 halting this year’s winter season, the Warhawks have had plenty of practice time to hone in on their studies.

And now there is hope they might get to show off what they’ve learned in competition.

The Wisconsin Intercollegiate Athletic Conference announced Dec. 11 that its Council of Chancellors has voted to resume winter sports competitions in February, contingent on the securing of ongoing COVID-19 testing.

Conference-only schedules might begin the first week of February, though schedules have not been released.

“They’re excited, and that’s good news,” said Miller, a Janesville native. “I think there are potential hurdles, but I also think they’re manageable hurdles. There’s different ways to secure funding for testing ... so I think there is hope.”

“The biggest key is we have to securing enough testing for our high-risk sports. We have to test those kids at a minimum of three times per week, and depending on travel arrangements possibly four,” Callahan said. “The announcement came out of the UW system that they’re going to test all students living in residence halls once a week, and off-campus students every other. So that works well for low- and medium-risk sports.

“The good news is, if we can secure testing, the chancellors have told us we’re a go.”

UW-Whitewater’s winter sports programs have spent their seasons up to this point practicing despite not knowing if they would ever be able to have competitions.

“It’s a testament to our student-athletes and our coaches that are really pushing that even if you don’t have a season, you can still work out and get bigger, faster and stronger,” Callahan said. “Our coaches aren’t signing million-dollar deals, and our student-athletes aren’t getting (athletic scholarships) ... but they want to participate in their sport for no other reason than the love of it.”

The WIAC is now in a no-contact period through the holidays that started Dec. 18 and runs until Jan. 4.

Miller said his players have maintained good attitudes during a tough situation.

“They’ve done a good job going with the flow, they’ve practiced well and they’re used to uncertainty,” Miller said. “We’d be disappointed not to play, but certainly there’s a lot of people in situations that are far more dire than not being able to play basketball games.

“They’re excited to just be in the gym. The college campuses are so different right now. There’s not as many people around; there’s not activities or things to do. For them to be able to go to the gym and get a workout in around other people, they look forward to it.”

Miller’s roster includes zero seniors, he said, and so if there is a silver lining to a winter season unlike any other, it’s that the extra time together building a strong work ethic, developing skills and fostering team chemistry.

“Worst-case scenario, it’s an amazing year to develop, get to know the system and get to know each other,” Miller said.

WIAC officials are still sorting that out.

Callahan said he is part of the basketball scheduling committee, which is still mulling its options. One of the options includes dividing the WIAC into north and south divisions so teams would play their closest rivals geographically.

“That would kind of be like was the WSUC used to be back in the day,” Callahan said. “Another scenario could just be a round-robin with everybody in the conference, and then ultimately a conference tournament where all eight teams make it in. We’ve got about three different schedules on the table.

“If we can secure testing for all the sports, we can probably go until the middle of March (for the winter season).”

Callahan said the WIAC’s announcement of a return to winter sports bodes well for the spring sports and that having a spring season has long been one of the top goals.

“When we initially started planning—even in April, May or June—I think we said we’ve got to get back to spring,” Callahan said. “Not saying we weren’t going to work our tails off for fall and winter, but worst-case scenario would be if we had to cancel another spring. It would put those kids back another year, where they have to make a tough decision whether they want to stick around for another year or two or graduate and move on. Our kids are paying tuition, so that’s tough.”

Since the fall sports season was shut down, those teams have held out hope of potentially playing some sort of season this spring.

Callahan said those possibilities are still on the table.

“The thing that’s right in front of our face is winter sports,” Callahan said. “We’ve really got to figure that out. The next step is going to be figuring out (traditional) spring sports. If we figure out those two things, which is obviously a massive undertaking, then we can talk about fall sports participating in the spring.”

In a video that made the rounds on social media earlier this month, Callahan announced he had tested positive for COVID-19 in recent months.

As of last week, he said he had still not regained his senses of taste or smell about two months after testing positive.

“I told a lot of people before I got COVID that I wasn’t worried about myself and wasn’t overly worried about my children, but I was more worried about grandma and grandpa,” Callahan said. “But my in-laws got it, and they were good in five days. I got it and it took me four weeks to recover. It’s serious. It was pretty scary once I found out I had it, but ultimately it did get better.”