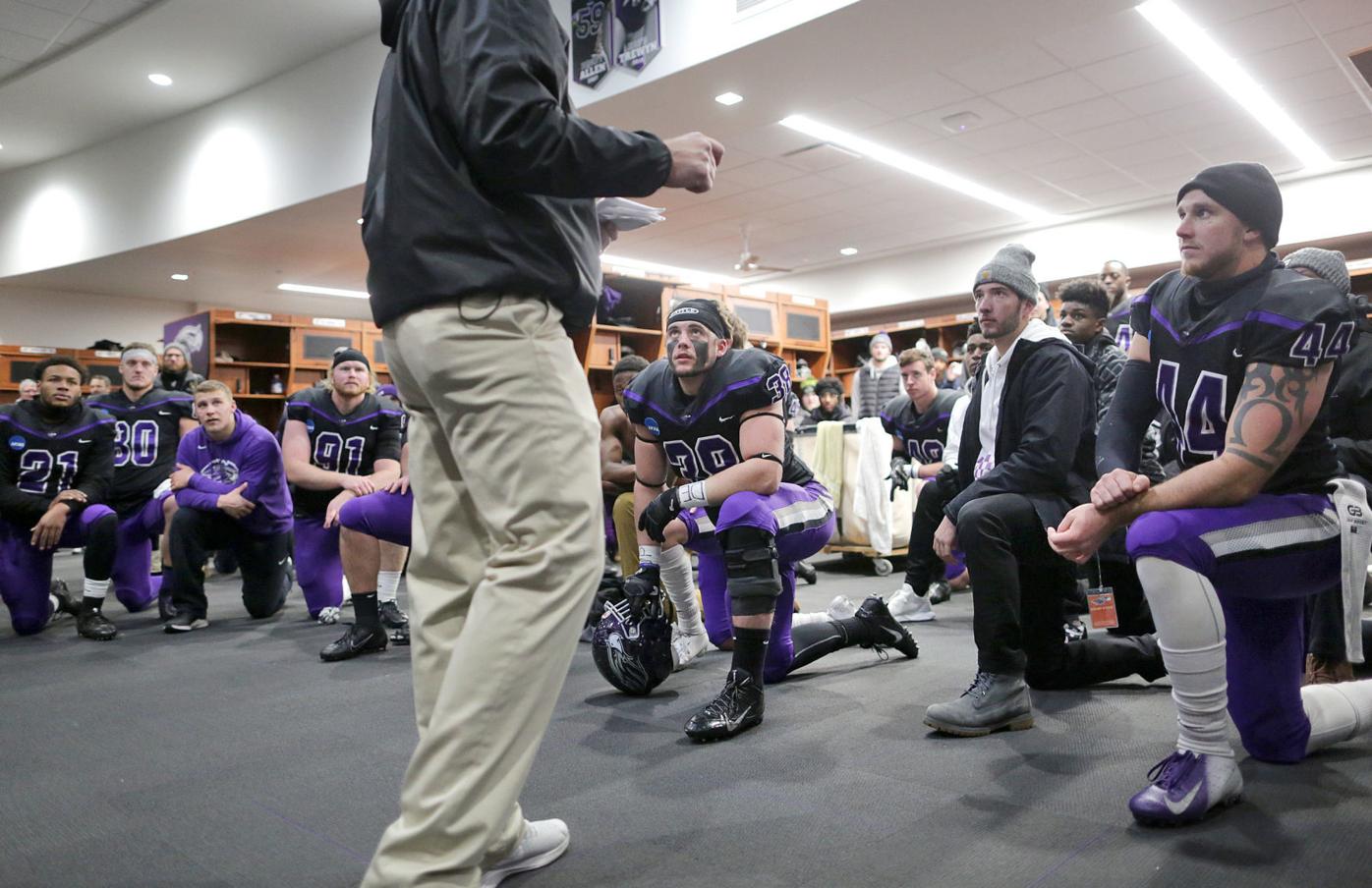 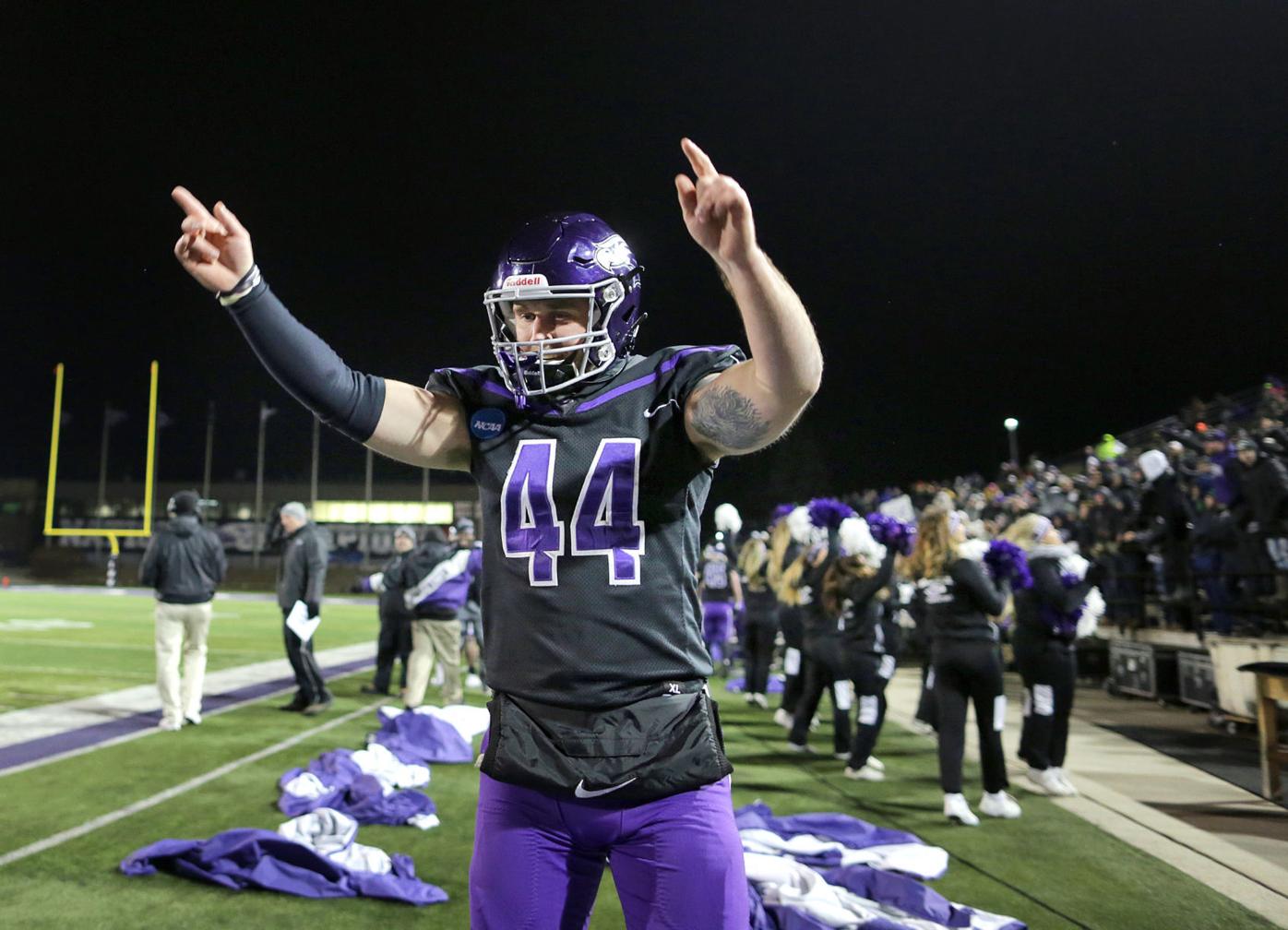 UW-Whitewater's Mason Fleury celebrates along the sideline as they defeat St. John's in their NCAA Division III national semifinal playoff game at Perkins Stadium in Whitewater on Saturday, Dec. 14. 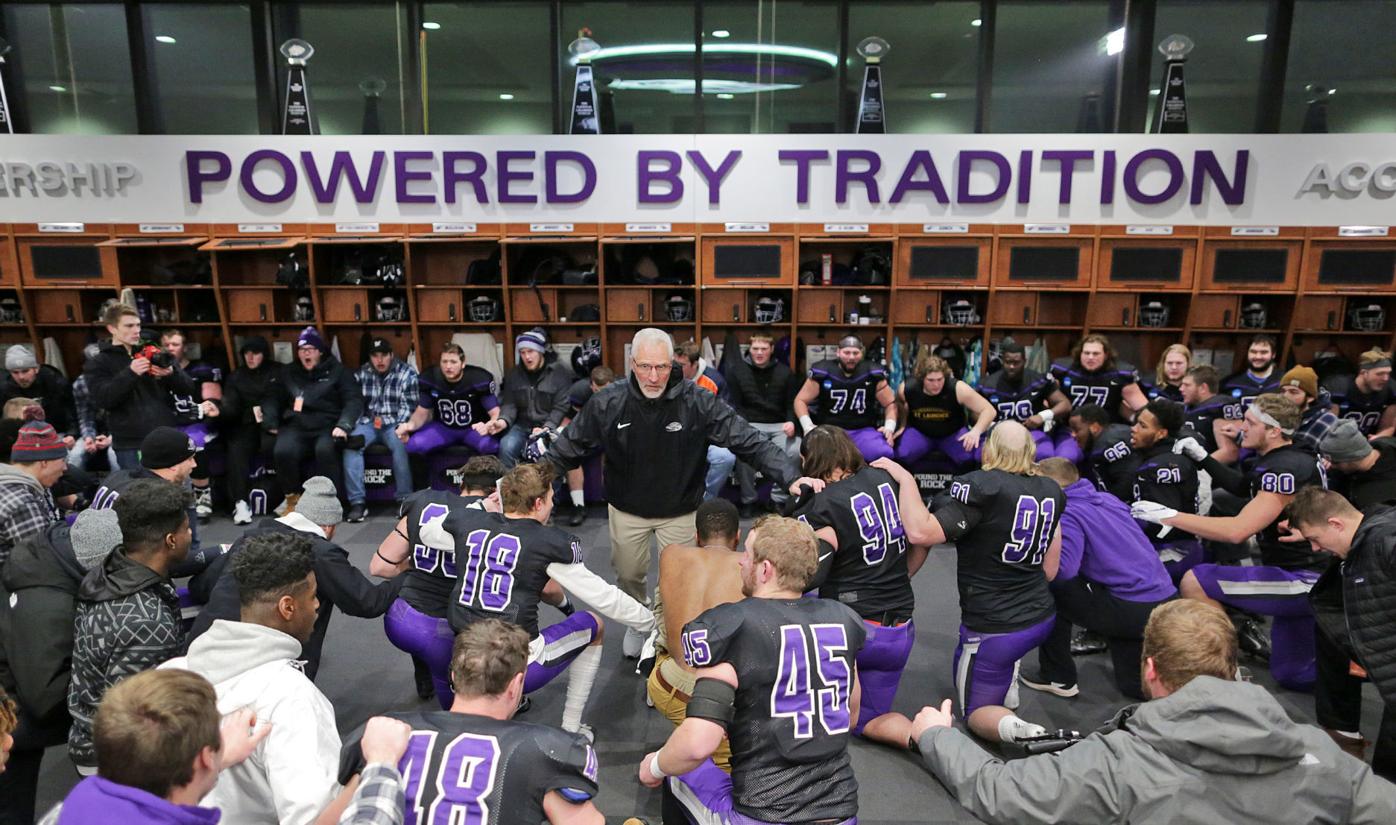 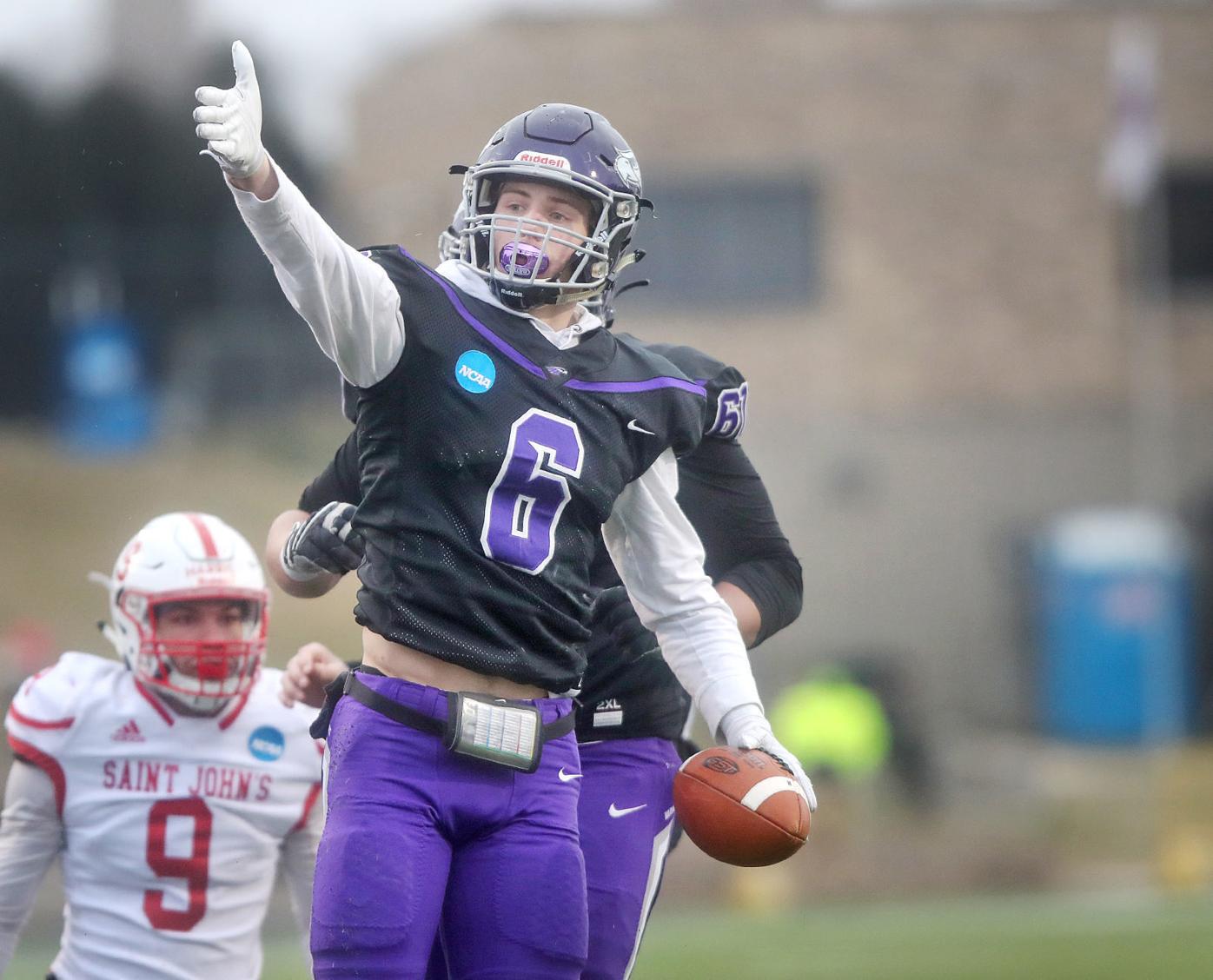 UW-Whitewater's Ryan Wisniewski signals a first down during the first half of their NCAA Division III national semifinal playoff game at home against St. John's on Saturday, Dec. 14. UW-Whitewater defeated St. John's 35-32 to advance to the national championship game.

UW-Whitewater's Mason Fleury celebrates along the sideline as they defeat St. John's in their NCAA Division III national semifinal playoff game at Perkins Stadium in Whitewater on Saturday, Dec. 14.

UW-Whitewater's Ryan Wisniewski signals a first down during the first half of their NCAA Division III national semifinal playoff game at home against St. John's on Saturday, Dec. 14. UW-Whitewater defeated St. John's 35-32 to advance to the national championship game.

When Kevin Bullis comes upon a new or challenging situation, he has a short list of coaching mentors he can usually call on for advice.

Former UW-Whitewater coaches Lance Leipold and Bob Berezowitz are a cellphone call away. John O’Grady, whose experience in the Wisconsin Intercollegiate Athletic Conference carries back more than 40 years to his playing days at UW-River Falls, is even closer as the special teams coach on Bullis’ staff.

If there is something that can happen within a college football program, it’s a near certainty at least one of those guys has seen it.

“Every coach has mentors, the ‘old coach guys’ that you call and say, ‘What did you do in the past on this one?’” Bullis said. “Well, I can still call those guys, but they don’t know either. Obviously Lance is in the same boat I am.”

Leipold is now the head coach at Football Bowl Subdivision University at Buffalo.

UW-Whitewater interim athletic director Ryan Callahan, Bullis and Leipold all face the same questions and uncertainty as their counterparts in different levels and sports across the country.

How do you prepare for practices and games amidst ever-changing restrictions and guidelines during the coronavirus pandemic? What are the ramifications if games are played with attendance restrictions or without fans altogether? And, ultimately, what if there is no football season this fall?

Callahan and the UW-W coaches have spent much of their summer months planning.

It is impossible to know exactly what restrictions or guidelines local health officials will have in place when student-athletes begin arriving on campus Aug. 10.

Coaches need to be ready to implement practice procedures that might include only working in groups of 10. Perhaps that number is 50.

Masks will be mandatory, as was announced Monday by UW-Whitewater, which laid out its campus plans for this fall.

“We’re fortunate at Whitewater that we have a veteran coaching staff,” Callahan said, referring to coaches across all sports. “They’ve probably had 15 different scenarios (they’ve planned for), and maybe some of them are out the window already just with some of the changes.

“We might find out Aug. 9 that we’re in Phase One, with only groups of 10, and you have to figure out what you’re going to do. You can’t just do that 24 hours prior to kids checking in.”

Callahan said athletic directors are using many different documents to try and help in their planning. Included is the NCAA’s guidance on the “Resocialization of College Sport.”

That plan includes a phased approach. Phase One mandates groups of 10 people or less, Phase Two includes groups of 50 and Phase Three is essentially open.

“Some things will carry through all three phases. We’ll be wearing masks for a long time,” Bullis said. “But then it’s how long will each phase last? And how do we fit that into teaching our players and preparing them to be their best?”

Bullis said the top priority has never changed in his eyes, and that is player safety.

“That part isn’t new, and it’s something we take pride in,” Bullis said. “But before it was pulled hamstrings, sore groins, sprained ankles. Now you have a pandemic, and an illness comes into the safety pieceo f how we’re going to function.

“Everybody’s going to have to do their part.”

Football programs at the Division I level have already seen their players return to practice for workouts.

At stake for schools and conferences at that level are billions of dollars in revenue from TV contracts and sold-out stadiums that hold tens of thousands of fans.

“I’ve read that stat that a Power Five team can generate $10 million on average per home game,” Callahan said. “We’re nowhere near that, obviously. But … concessions, tickets, and then add in the economic impact of restaurants, gas stations, convenience stores and taverns, it’s (potentially) a significant loss.”

Multiple Division III schools have announced they are cancelling fall sports, including Grinnell College in Iowa this week. If the fall season is canceled, Callahan also worries about the impact UW-W could face from athletes taking a semester or year off from school.

“I’m sure that’s the same (concern) for Division I, II and III, and not specific to us,” Callahan said. “When spring was canceled, the NCAA gave a blanket waiver for all students (that they wouldn’t lose a year of their eligibility during the pandemic.”

Callahan said he hoped the NCAA would do the same thing if fall sports are similarly affected.

He also said Wisconsin Intercollegiate Athletic Conference athletic officials have been working together on a plan to present to the chancellors next week.

“A lot of it depends on whether they approve our plan or have recommendations and we have to go back to the drawing board,” Callahan said. “We’ll see.”

With the number of coronavirus cases on the rise nationally and some states and areas particularly being hard-hit, even a plan delivered to chancellors next week would need to be tweaked or changed as August arrives.

Sports fans would rather not deal with the worst case scenario and the elephant in the room: What if there is no football season this fall?

Bullis understands that possibility exists, but he leans on one of his guiding coaching principles when dealing with it. He cannot control that potential outcome, so he refuses to spend his time thinking about it.

“We’ll deal with it if it comes, but right now, I don’t have time to worry about that,” Bullis said. “It’s all about staying in the present, what I have in front of me today, and that’s a phased process for fall camp.

“It’s easy to not stay in the present right now and to let your mind wander. But can only control what we can control. And what I can control is putting together the best dang fall camp plan that I can. And that’s what I’m working on today.”