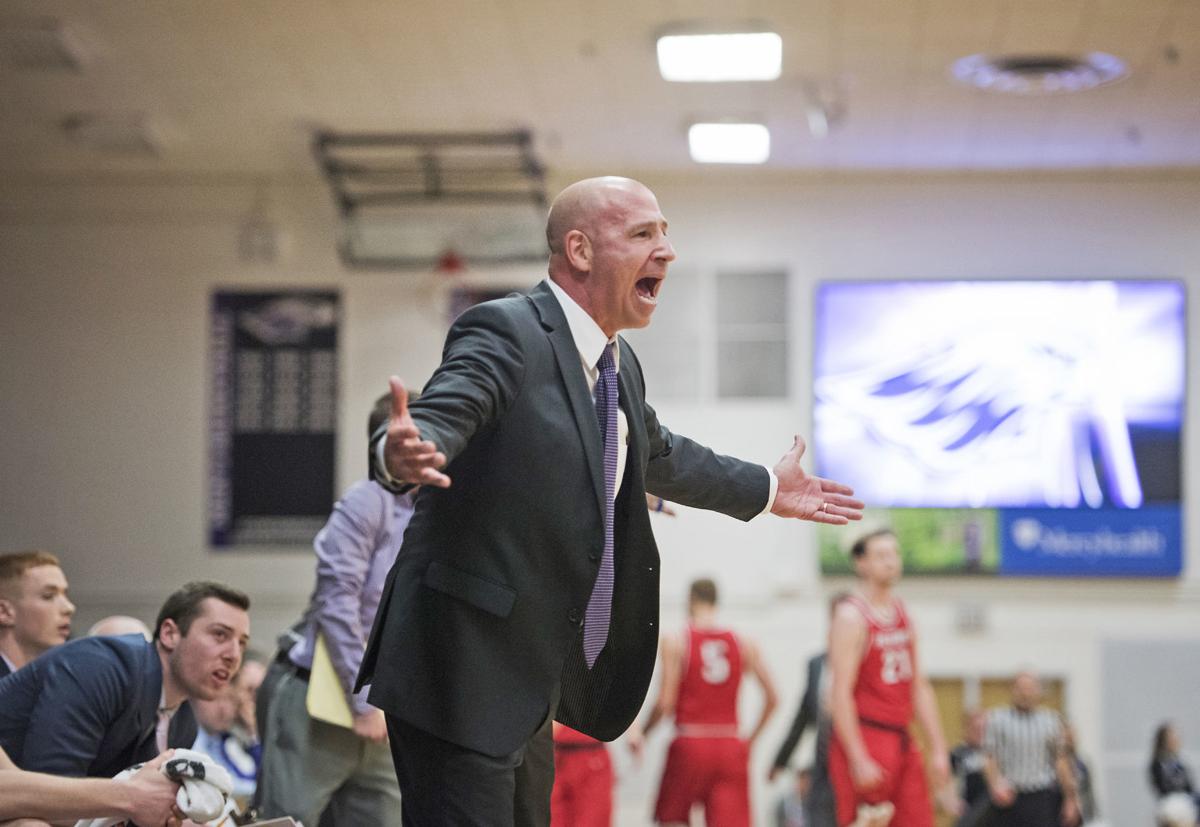 UW-Whitewater coach Pat Miller expresses his frustration with a call made by a referee during the Warhawks' game against UW-River Falls on Saturday, January 6, 2018, at UW-Whitewater.

UW-Whitewater coach Pat Miller expresses his frustration with a call made by a referee during the Warhawks' game against UW-River Falls on Saturday, January 6, 2018, at UW-Whitewater.

The Janesville native’s accomplishments earned him a spot in the Wisconsin Basketball Coaches Association Hall of Fame in September.

So what did the coach entering his 19th season as the leader of the Warhawks’ program decide to do for this season? He basically has revised his long-time systems that earned his teams all those victories.

With those changes comes a long list of new players. In previous years, Miller has brought in transfers to fill out the lineup to maintain a spot in the top tier of the Wisconsin Intercollegiate Athletic Conference standings.

This season, he will rely on freshmen.

“We tried to fit it with personnel and what type of players we feel like we can get,” said Miller, who has a 386-123 record at Whitewater. “With the number of new people we had, we felt like if we were going to make a change this was the time to do it.”

The new players and systems will be on display for the first time today when the Warhawks open the season on the road against Milwaukee School of Engineering at 7 p.m.

Among the other six returners from a 17-9 team that finished sixth in the conference with a 6-8 record, James Fox and Paul Kingsley could see time in the backcourt. But the heavy lifting will be done by players without WIAC experience, like Bailey Kale, Brian Conaghan and Austin Gates—all of whom are in their first year on campus.

“Some of our freshmen have set the tone in terms of physicality, intensity,” Miller said. “As our guys know, I tell them all the time, this is not a program where by virtue of your class or hanging around that you move into positions. I’m playing the best guys. Bottom line is that some of these freshmen have come in and beat people out.”

Kale graduated from La Crosse Central and went to Minnesota Duluth before transferring to Kirkwood Community College in Iowa, where he was a reserve guard for a Division II National Junior College Athletic Association championship in 2018-19.

“It’s actually pretty good basketball,” Miller said. “I went and watched like four of the games and there were a bunch of guys who could play at our level, for sure.”

Gates is another player who will see minutes at the guard position. Initially, Gates had his sights set on playing college football, but an injury to his shoulder led him to settling on a basketball career.

“He wasn’t really recruited, because people thought he was going to play football and they backed off,” Miller said. “We were fortunate to get him. He’s physical and plays really hard.”

The interchangeability and structure of the new UW-Whitewater offense, which is based off of the offense coach Jim Belein ran during his career at Michigan, should benefit the team’s athleticism, but it will be a challenge to gain a firm grasp of the particulars until the season gets rolling.

Defensively, the Warhawks struggled to defend the post each of the last two years. Miller sought out an adjustment there, too.

To go with Jensen, UW-Whitewater is betting on the return of sophomore David Grintjes, who broke his foot in September, for the second half of the season. Grintjes, a 6-foot-11 center from West Bend, played in 14 games and started in three.

Jack Brahm is a 6-foot-5 forward who also will mix in as an option for the Warhawks as they defend the post.

Junior Equan Ards, a junior college transfer from Iowa Lakes, will be a 6-foot-3 option in the post. Freshman Trevon Chislom of McFarland is also expected to contribute.

“We’re changing our man-to-man principles. There are obviously different ways you can influence the ball, pressure the ball, extend the ball, pack it in (the paint),” Miller said. “It’s pushing people more to the outside and to the baseline and then your backside basically becomes a zone.”

Their success will be determined by how effective the new faces carry out the new systems.