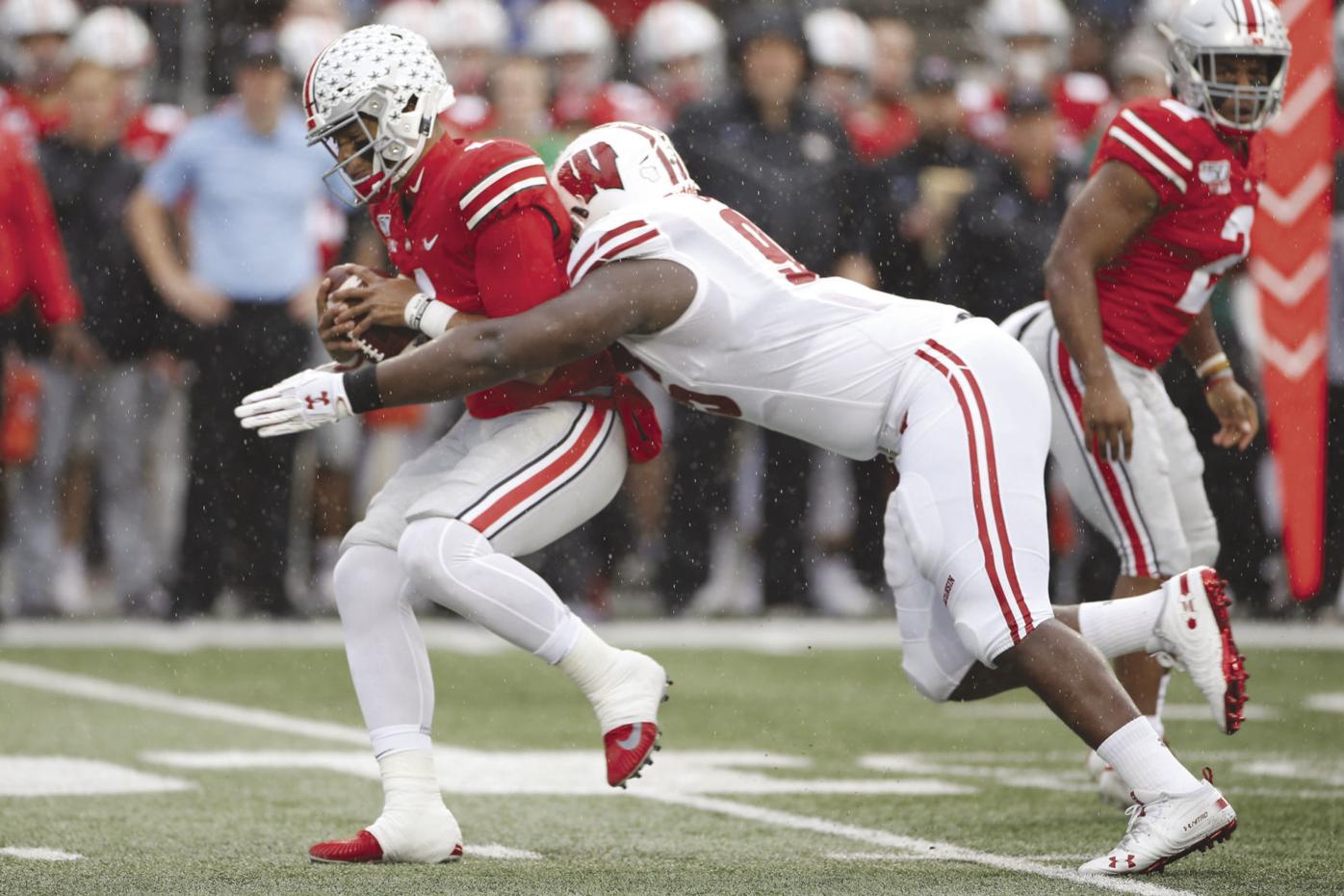 Wisconsin defensive lineman Keeanu Benton, right, sacks Ohio State quarterback Justin Fields during a game Oct. 26, 2019, in Columbus, Ohio. Benton, a Janesville Craig graduate, is wrapping up his freshman year at UW by finishing classes online due to the coronavirus pandemic. After starting six games at nose tackle as a true freshman last fall, he said he is hoping to be more of a vocal leader moving forward. 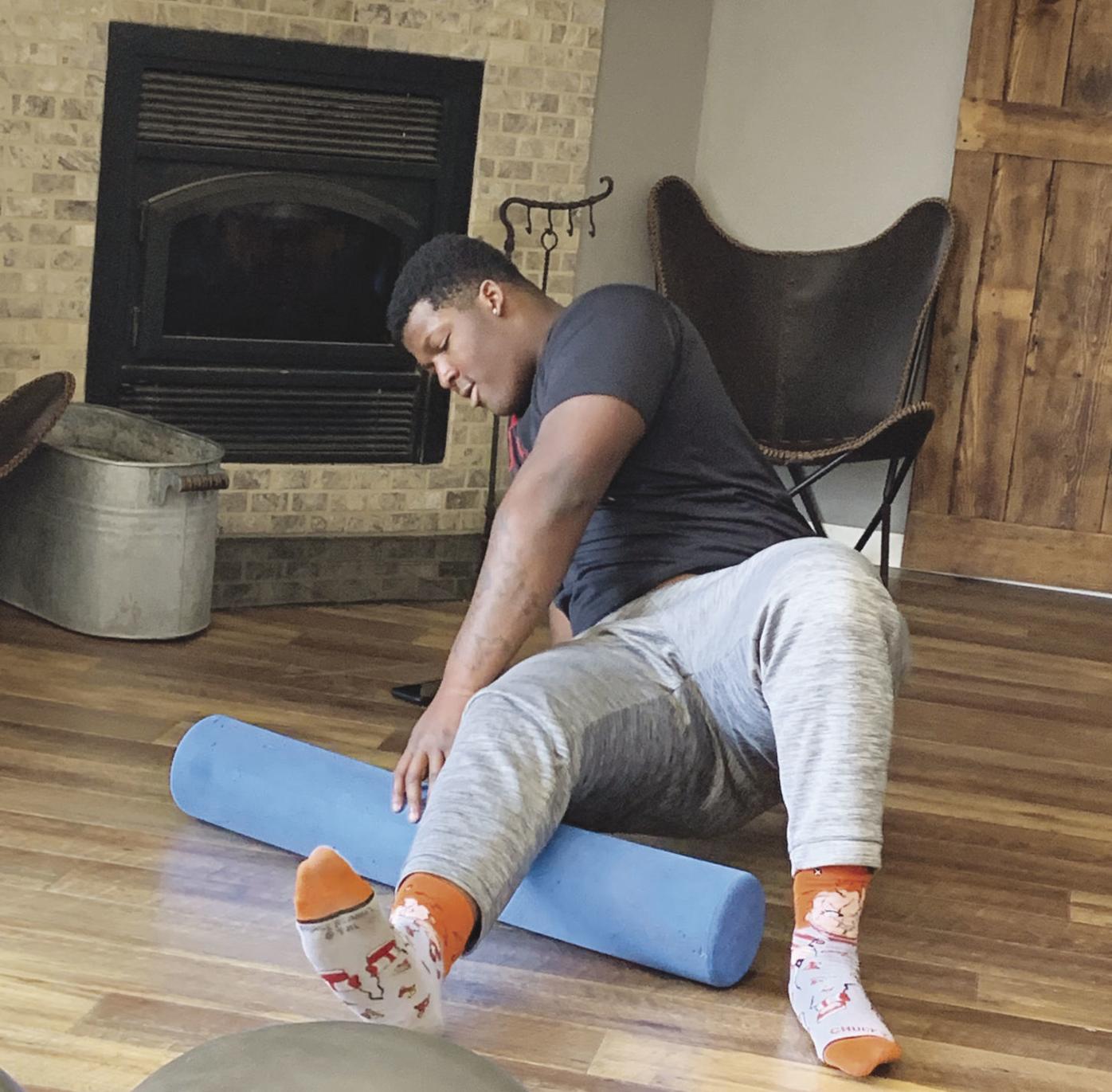 Janesville’s Keeanu Benton, a defensive lineman for the University of Wisconsin football team wrapping up his freshman year, stretches using a foam roller Monday. Like many college athletes across the country during the coronavirus pandemic, Benton is doing his best to keep a routine after being sent home for the semester.

Wisconsin defensive lineman Keeanu Benton, right, sacks Ohio State quarterback Justin Fields during a game Oct. 26, 2019, in Columbus, Ohio. Benton, a Janesville Craig graduate, is wrapping up his freshman year at UW by finishing classes online due to the coronavirus pandemic. After starting six games at nose tackle as a true freshman last fall, he said he is hoping to be more of a vocal leader moving forward.

Janesville’s Keeanu Benton, a defensive lineman for the University of Wisconsin football team wrapping up his freshman year, stretches using a foam roller Monday. Like many college athletes across the country during the coronavirus pandemic, Benton is doing his best to keep a routine after being sent home for the semester.

Keeanu Benton sounds like a typical college student home for the summer:

He gets home-cooked meals, works out during the day and stays up until the wee hours of the morning playing video games.

Only he’s not your typical college student. And it’s not summer.

Benton, who is coming off a successful freshman season with the University of Wisconsin football team, is one of thousands of college athletes who were told to leave campus when universities shut down due to the COVID-19 pandemic last month. Many players have returned to their hometowns, where they are sifting through workout instructions and playbook installations from trainers and coaches, while fulfilling their academic obligations online.

“I guess I really didn’t know what was going on at the time (of the start of the pandemic),” Benton said. “(The coaches) said we weren’t going to come back for a while. I left my football cleats there.”

The 2019 Janesville Craig High graduate would normally have just recently wrapped up spring camp with the rest of his teammates. But even if the coronavirus had not brought the entire sports world to a grinding halt, Benton would be one of several players not participating due to injury.

During a sprint drill, he said he felt a pull in his lower abdomen. He did not think much of it at the time.

“I woke up the next day sore and told the trainer. But it wasn’t too serious,” Benton said. “The next day I worked out again and felt it pull again, but this time it was a sharp pain.”

Benton had two MRIs and later had sports hernia surgery, he said. He has just recently been able to step up his workouts coming back from the injury but is being careful not to push it too hard.

Still, Benton is driven to improve heading into his second season.

As a true freshman, he was thrust into a bigger role at nose tackle as starter Bryson Williams battled injuries most of the season. Benton made six starts and tallied 12 tackles, including a sack per game in two meetings with conference champion Ohio State.

He praised Williams and other teammates for helping build his confidence before earning valuable snaps.

“Having somebody behind me (linebacker Chris Orr) that knows what he’s doing, and knows what he wants me to do, helped me,” Benton said. “Before he got injured, Bryson taught me so much stuff in the summer. (Defensive end) Matt Henningsen knew my position, so he taught me a whole bunch of stuff. It was really like family bonding and it helped me out a lot.”

Benton said one of his goals moving forward is to become more of a vocal leader on defensive coordinator Jim Leonhard’s unit. He admitted that being young and in his first year with the team, that was not his role.

Another area he wants to improve is his endurance. As a freshman getting a lot of snaps, Benton had to occasionally come off the field because he said he was “gassed.”

Now at home, Benton does his calisthenics and agility drills in the back yard. In the basement, there is a makeshift weight room, but he also goes over to former Craig teammate Asa Albrecht’s house to work out because there is more equipment to utilize, he said. Benton said they attempt to follow social distancing guidelines and make sure everything is disinfected.

Like any sports fan, Benton is missing live events but said he has been watching old games to try and fill the void.

He plans on watching the NFL Draft on Thursday, Friday and Saturday, where a couple of his former Badgers teammates will likely hear their names called.

One player likely to be taken in the first three rounds is Amherst native Tyler Biadasz, last year’s recipient of the Rimington Award given to college football’s best center. Benton was thankful to have a chance to improve against a player such as Biadasz by going a couple rounds with him every practice.

“I always wanted to go against him, because I knew he was the best,” Benton said. “My coach always told me I had a phenomenal pass rush. But when I beat Biadasz in 1-on-1 drills, I’d think, ‘That was a fluke; he’s not trying.’

“Until he told me one time, ‘I can’t stop that.’ So that helped build my confidence, too.”

What about potential first-round pick, running back Jonathan Taylor?

“We really couldn’t touch him and had to just let him run through,” Benton said. “I was there a few times, though. I could have!”

For now, Benton has made himself a daily routine that includes a workout regimen, lifting schedule and classroom study time. He said he stays in touch with players in his position group and teammates in his particular year in school, and they all push each other to get better and hold themselves accountable.

But like any college student, there still needs to be down time. What does Benton choose to do?

“Gaming,” he said with a grin. “After I work out, get everything done that needs doing, clean my room … I game all day.”

Benton’s favorite game on his Playstation 4 is UFC.

All that gaming until the sun starts to rise requires energy, and Benton credits his family for keeping him well-fed.

“It’s actually back to normal, because mom was used to cooking for six people even though we had five (after he left for Madison),” he said. “But me not being there, there was a lot of leftovers going to waste.

Spoken like a typical student back home from college.

Josh Golberg is the Sports Director for Big Radio’s WCLO 1230 AM and 92.7 FM and WJVL 99.9 FM in Janesville. Find him on Twitter @JoshGolberg