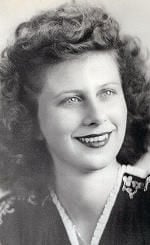 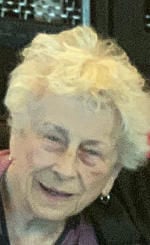 Milton, WI -- Martha Ruth McKnight Enlow passed away after a brief health issue on the day she was to celebrate her 93rd birthday. Martha was born in Arlington, TX to Ernest and Lola McKnight, and lived there until she married Donald Enlow at the age of 18. She and Donald lived in several different states, and traveled around the world extensively, until their final home in Milton, WI. Even though she claimed residence in seven different states, she always considered Texas home. She carried herself as the perfect southern lady right up until her last moments. Martha experienced significant loss early in life, at the age of 16 losing both of her parents and her brother within one year. As the youngest of seven children, she finished up high school living with a close family friend and then her sister. Martha was a dog lover to the point her family wondered who she would choose if forced to make a choice. Her last dogs, Tulip, Buster and Tiger brought her an immense amount of joy. They also gave her comfort, as the last surviving sibling, through the loss of her grandson, Steve, and the loss of Donald after almost 69 years of marriage. You would never know the grief she experienced, as she always carried herself with strength and grace. She was a quiet competitor, loving to play, but also to win at golf, bridge, and scrabble.

She is survived by her beloved child, Sharon Hack; a son-in-law she loved dearly, Roger; two granddaughters, Lisa (Mark) Tate and Janna Hack; four great-grandchildren: Logan, Michael, Bryce, and Kaia; and many nieces and nephews. We will always carry her memory in our hearts.

Special thanks to the staff at Milton Senior Living and Dr. Green with Mercy Palliative and Hospice Care.

To plant a tree in memory of Martha Enlow as a living tribute, please visit Tribute Store.

The state of Wisconsin is projecting a budget surplus of more than $800 million. What should legislators do with this extra money?