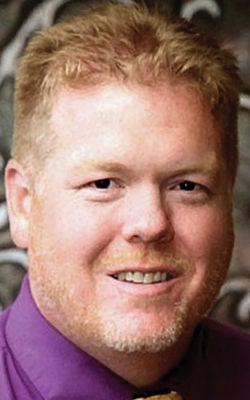 Buying the school that the district currently leases and renovating it would cost $6.92 million, according to the district. That breaks down to $955,000 to buy the property and nearly $6 million for renovations.

But there is no expected tax rate impact for that referendum question because the district is retiring debt from projects at the middle school and Jackson Elementary School.

Superintendent Jason Tadlock said one of the most common questions district officials get is: Why not buy a new building? But Tadlock said a new building would cost about twice as much—an estimated $12 million to $13 million, which does not include the cost of buying the land.

“It also saves what is a community resource,” he said. “And it keeps it from decaying worse or becoming blighted, so to speak, and being another abandoned building in town.”

Options Charter School is growing, too. Tadlock said enrollment has increased from nearly 200 at the beginning of the school year to 285.

The school has personalized in-building and at-home curriculum, and high school-level students can take advantage of a partnership with Gateway Technical College and UW-Whitewater to earn college credit, technical diplomas, professional certificates and even associate degrees, district officials have said.

Some updates to St. Patrick’s that the district lists on its website include those to windows and doors; landscaping; heating, ventilation and air conditioning; and the alarm system.

Tadlock said the decision to ask voters about buying the school comes down to this: It’s the right space in the right building, and it comes at the right price and the right time.

If voters approved the referendum, Tadlock said some work could begin this summer, but most of it would be done in summer 2021.

A preliminary timeline estimates site work would be completed in October 2021.

Over the last few months, Tadlock said district officials have appeared publicly to share information about the project. As a result, some residents are learning more about Options Charter School.

“There were a lot of people in the community who ... didn’t even realize we had a charter school that size,” he said.

He said the community response has been “very positive.”

Another common clarifying point Tadlock has made is that the second referendum question—adding $200,000 to the operations budget each year starting next school year—is for operations in the entire district, not just St. Patrick’s.

The extra funds, which would boost the operations budget from $300,000 to $500,000, would be earmarked for maintenance and technology updates.

This question will have an impact on taxpayers. District projections show a tax rate increase of 9 cents per $1,000 of equalized property valuation, which translates to an extra $9 for the owner of a $100,000 home.

If voters approve the second referendum question, some of the new operational funds would be used for smart boards and computers in classrooms, software licensing costs, servers and other infrastructure, according to the district.

Here are the two questions voters in the district will see on their ballots:

The Elkhorn Area School District introduced a program that will have high schoolers statewide work online toward various certifications, including associate degrees.