Blackhawk Technical College’s Nov. 3 referendum project has been in the works for more than a decade, and it’s something college leaders say is a necessity.

If approved by voters, the $32 million proposal would pay for a new public safety and transportation training center at Blackhawk Tech’s main campus south of Janesville.

BTC President Tracy Pierner told The Gazette that the project would have a lasting impact.

“This is about more than Blackhawk Technical College. This is a resource for our area law enforcement, firefighters and first responders,” he said. “This is a community resource, and it’s as much about those agencies as it is about the college.”

The facility would have an educational building to house numerous programs and training facilities for those studying or working in transportation, law enforcement, firefighting and EMS, and electrical power.

The public safety and transportation center proposal dates back to 2006, when it was identified as a need. Pierner said building drawings were made, but the project was scrapped when the General Motors plant ended production in 2008.

“That need hasn’t gone away. It’s been there the whole time, and other things have happened to further exacerbate that need,” Pierner said.

The last need is especially critical considering the current national spotlight on police training, Pierner said. In 2015, the Department of Justice increased the amount of technical college training needed for new officers from 520 hours to 720 hours. 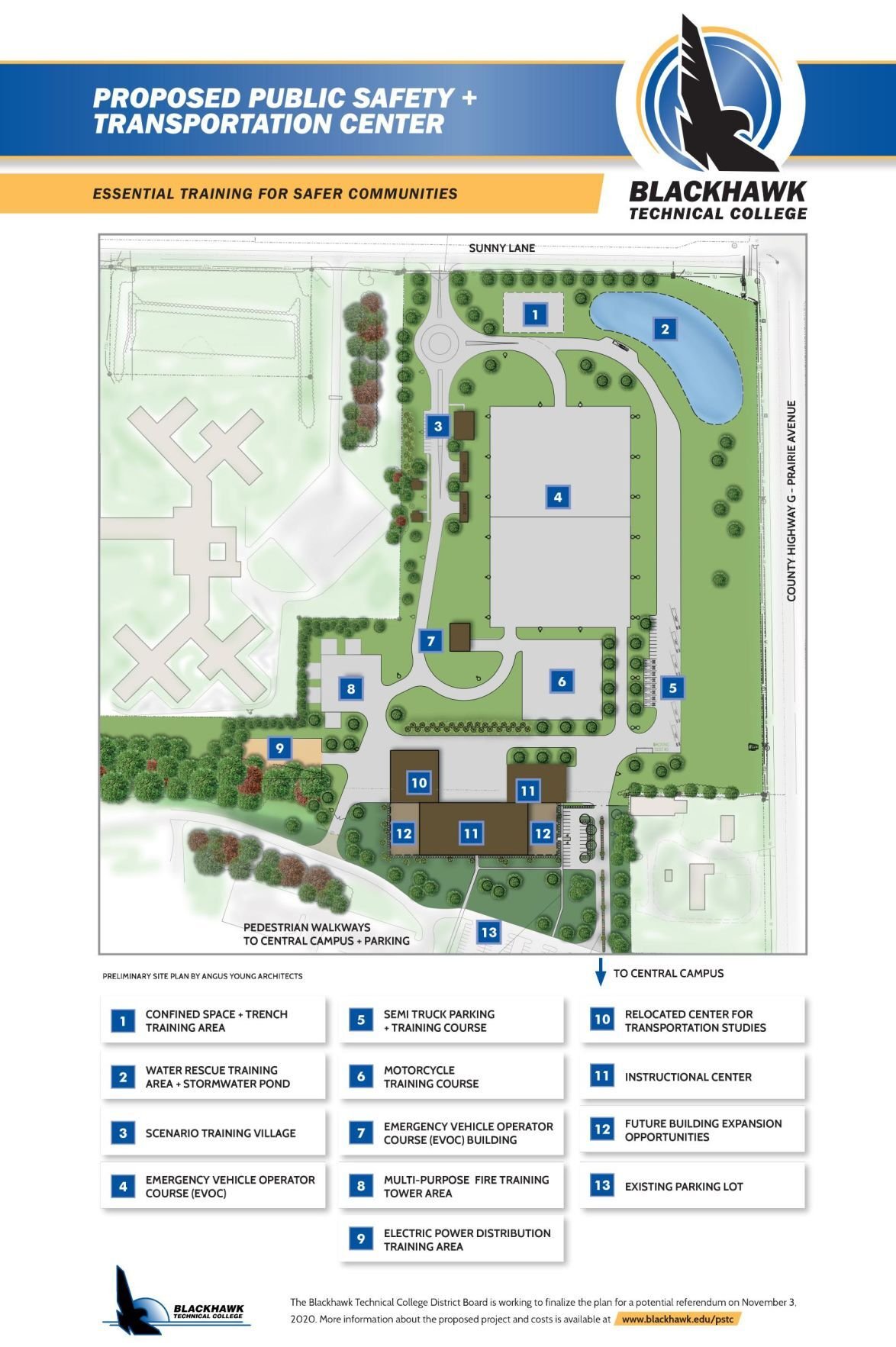 Pierner said in the current climate, training requirements will continue to grow for police officers, and he thinks this project can help.

“We have been behind what’s needed for our community since 2006, and if this were to not pass, I don’t know how long it would take before our community would go elsewhere to seek appropriate training,” he said.

“And with everything happening in our country right now, do you think the training requirements are going down or up? They will be up. We need to be able to serve our community, and we are not. There’s a lot at stake with this project.”

The owner of a $100,000 home in the college’s taxing district, which covers most of Rock and Green counties, currently pays $59 in taxes a year to Blackhawk Tech.

If passed, the referendum is expected to push that number to $62 in year one and year two before dropping back to $61 in the third year and $60 in year four.

The numbers would continue to drop before the debt is paid off in 20 years, and taxes would return to normal levels by year five, BTC officials say. That progression is possible because the college is retiring other debt.

The recent sale of the existing transportation studies building likely will reduce the property tax increases, but officials were unsure about the amount.

Regardless, Pierner said the facility is needed by both the college and community. If the referendum passes, it would affect about 900 students each year. If it fails, the community will feel the impact, he said.

“We have to do something or there is going to be a significant negative impact in our community,” he said.

“I would ask people to talk to every police chief in the area. They are 100% behind this and see this as a need. Talk to fire chiefs, talk to the transportation businesses. The answers lie there. Just ask them. This is needed, and we can’t wait any longer.”