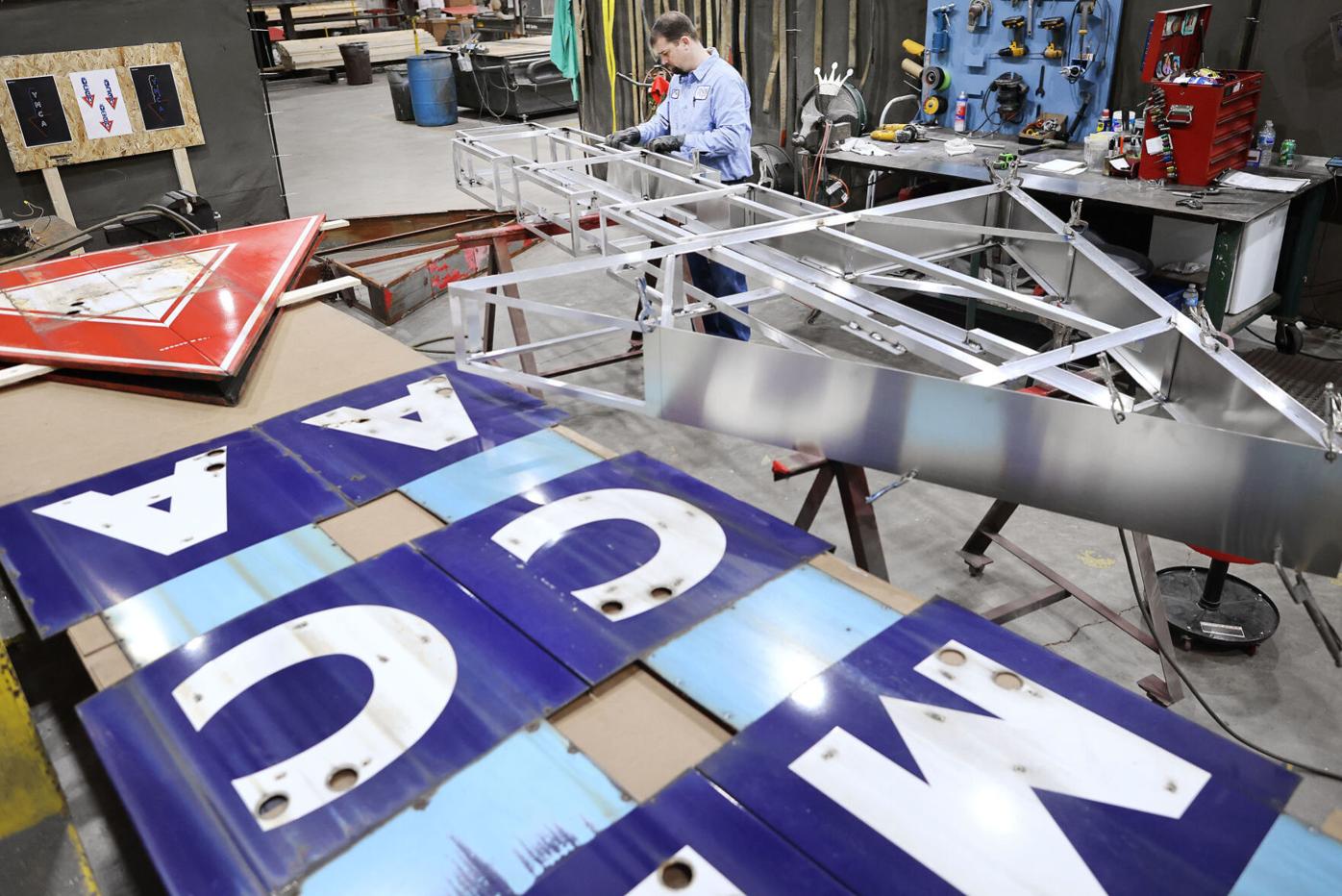 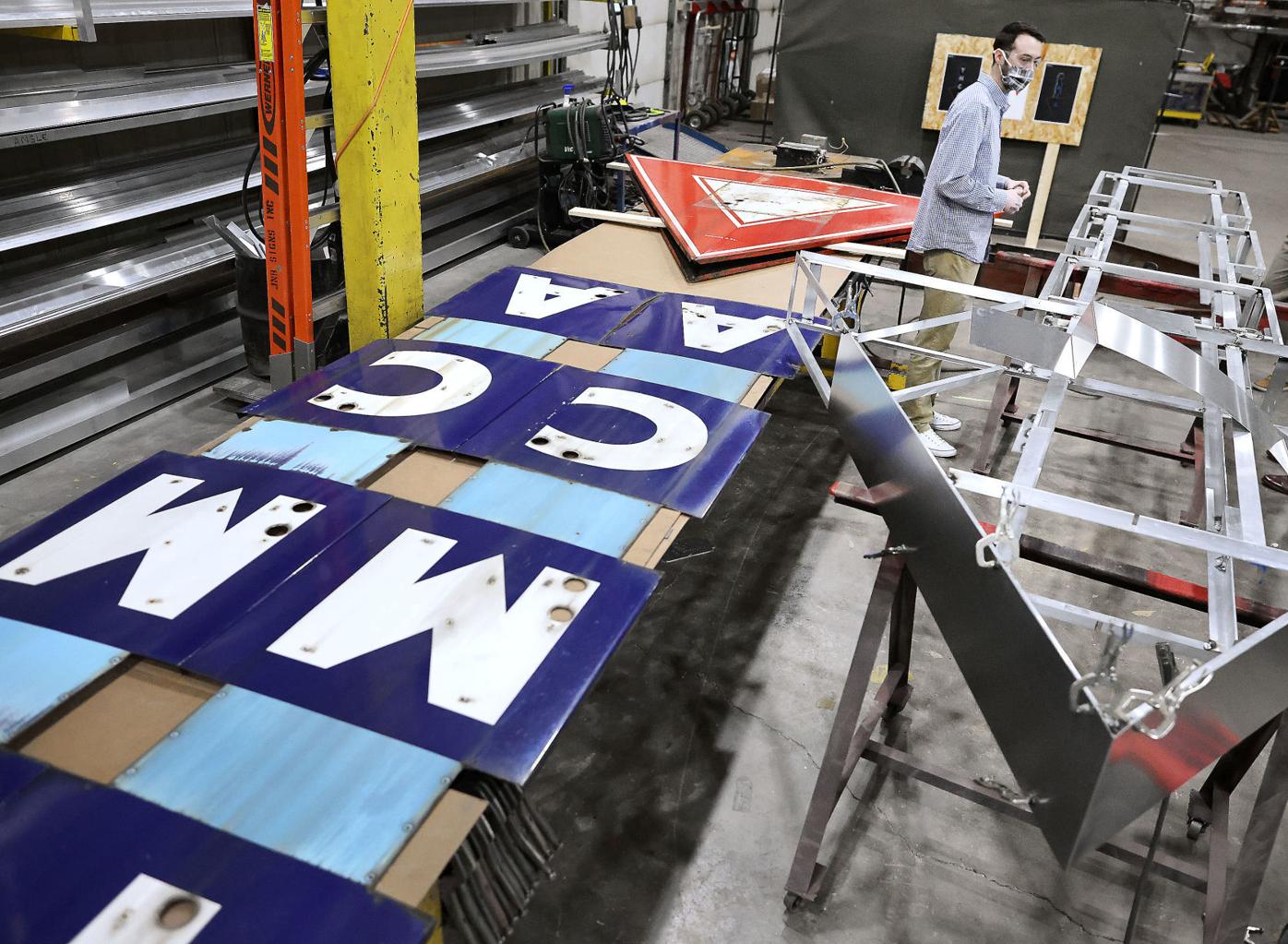 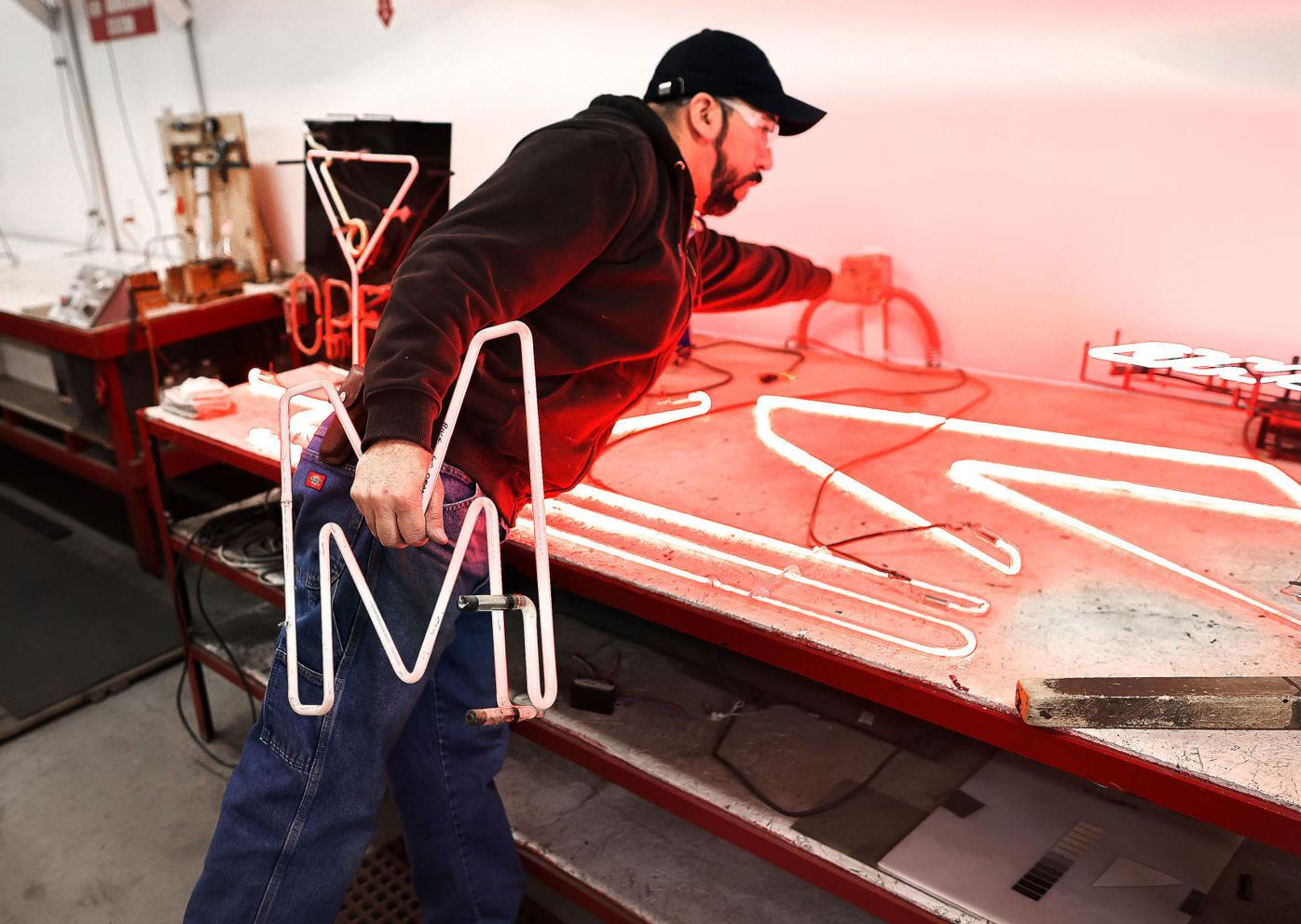 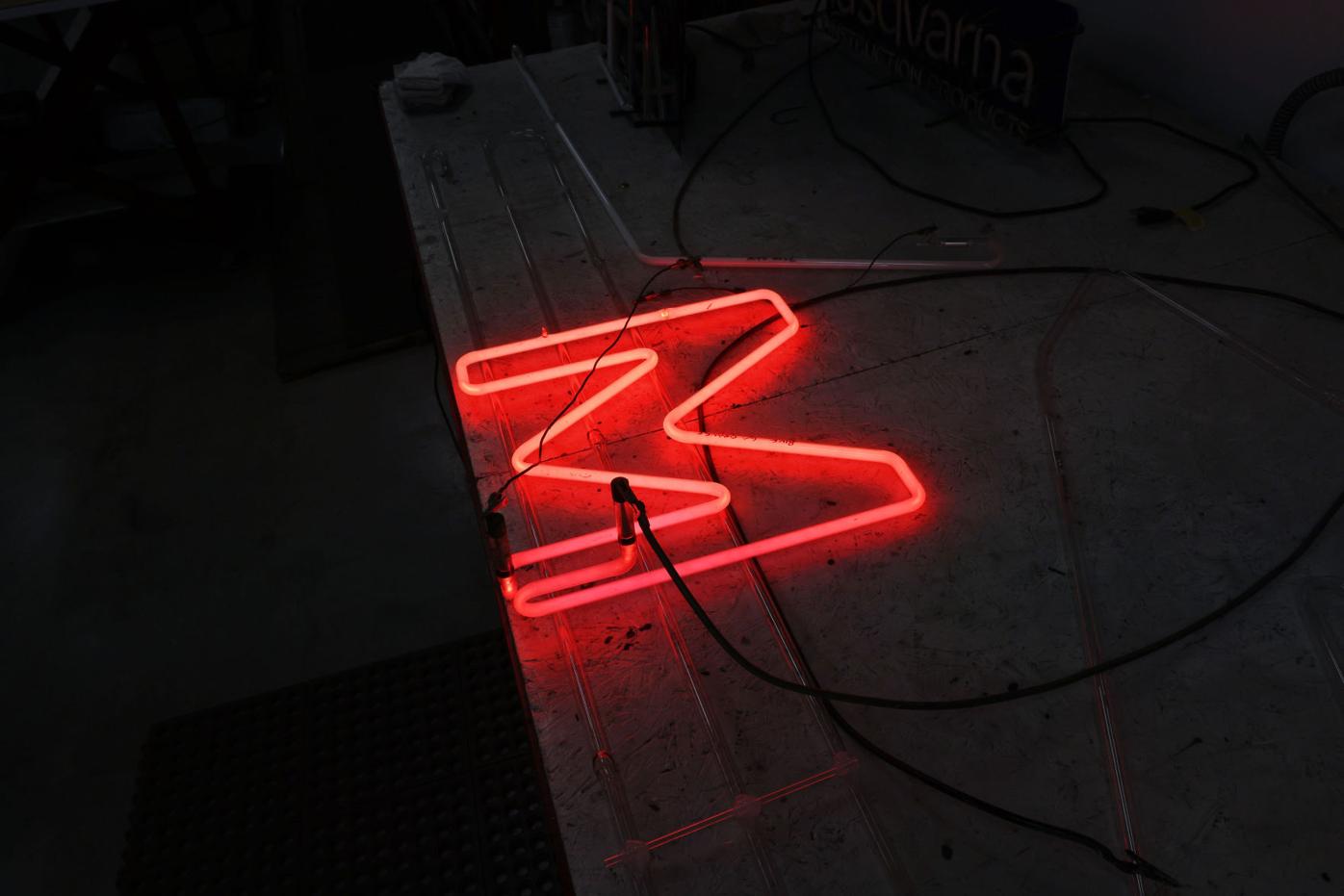 A landmark sign first installed in the neon 1950s will make a luminous return to the side of the YMCA building in downtown Janesville sometime this spring.

The YMCA of Northern Rock County is using private donations to rehab the 15-foot-tall, blade-style neon sign that has hung for 63 years on the northeast side of the Y on Dodge Street.

The sign has been dark for at least 15 years, either because of a wiring problem or neon leak.

Janesville sign fabricator JNB Signs is tackling the job of replacing all of the big metal sign’s wiring, glass tubing and more to bring it back to its original, neon-glowing state—or at least as close to original as possible.

JNB Signs General Manager Nick Russotto, graphic designer Kaitlin Hackner and sales manager Matt Stried said they and YMCA leaders dug for historical details on the original color and lighting scheme for the sign, which is now in pieces at JNB’s south-side shop.

It’s clear from the way the ceramic paint has held up that the sign was never repainted from its original red, white and blue. A Gazette article from Jan. 24, 1958, reported the then-new “attractive neon sign” was being installed to cap off a remodeling project the Y underwent the same year.

The article doesn’t mention which neon colors cast the original glow, and it might be anybody’s guess.

Based on past work orders and parts replacements, Russotto said JNB has pieced together that sometime in the 1970s, someone servicing the sign swapped its original lighting scheme in favor of orange-and-green neon—two colors most popular at that time. Most old photos of the sign at night are in black and white, which are of little help in a color reconstruction.

Stried remembers seeing the sign at night as a kid in the 1970s. At that time, the Y’s sign—a landmark for car cruisers—glowed orange and green.

When Stried saw the tubes lit up for testing at JNB’s neon lighting workshop, they stirred a sense of nostalgia within him. He thinks it’s more likely that, originally, the sign lit up in blue and white neon when it was first hung in 1958.

JNB this week gave the Y a pair of 3D renderings that reinterpret how the first sign might have looked at night.

One rendering shows the vertical YMCA letters lit in bright blue neon. In another scheme, which Russotto and Hackner think is more likely to have been original, the letters are bright white against a blue neon background.

If not for a private donation to help make the case for a revamp, the sign’s days might have been numbered. Stried said Y leaders had contemplated removing the sign as they work to bring marketing in line with the national organization’s branding strategy.

In an announcement about the sign rehab, CEO Angie Bolson said the Y wants to give longtime members a sense of “nostalgia” while trying to draw in potential new members. The Y views the project as a small piece of the city’s downtown revitalization.

The sign could be reinstalled and in working order again by mid-April, officials said.

When JNB removed the sign earlier this month, the unbolting and unchaining of metal framework revealed two startling things.

However, they also discovered that the metal frame holding the sign was badly rusted and had been weakened by several modifications to the lighting and wiring.

JNB has begun fabricating a new aluminum frame for the original colored panels. Russotto said the company plans to clean and polish the ceramic color coating on the panels to bring back as much of the original luster as possible.

The company also will hand-shape new neon tubes for the sign and replace all the lighting transformers, some of which are from the late 1960s.

When finished, the YMCA sign will be one of few large neon signs that remain in working order downtown. Another is the large red Ace Hardware sign on the roof of the Ace store on South River Street.

“It’s kind of a dying art, neon. But when you compare how it looks to newer lights that use LED to replicate neon, the LEDs look good. But they’re no comparison to true neon,” Russotto said.

He and Stried said their company works on new neon signs all over the country. It’s a rare opportunity to preserve a local sign that’s considered iconic and bring it back to its original state.

Russotto pointed out that the screws used to assemble the sign are backed with their original square nuts. In 1958, someone would have hand-tightened all those screws.

“For the person who originally put this sign together, it would have taken them days to put in all those screws,” he said. “Whoever did that work, they’re probably deceased by now.

“That’s what you’re thinking about when you get some of these old signs in. It’s not just business. There’s more responsibility and history tied to it. So it’s beyond being just another job.”