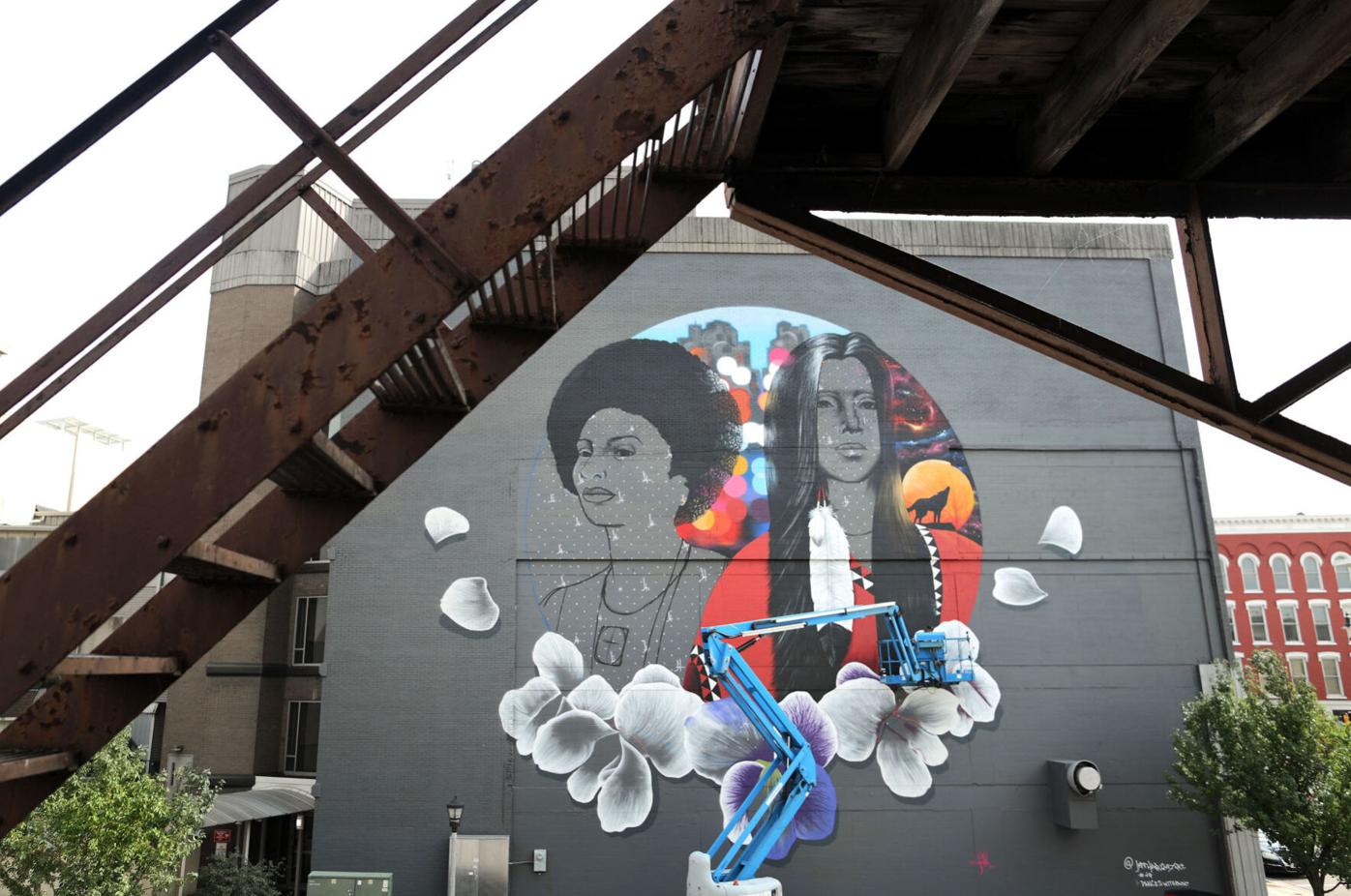 Artist Jeff Henriquez works Wednesday on his new mural on the side of the Prospect 101 building in downtown Janesville. The mural’s theme is diversity and women’s history. The work was delayed by last week’s rain, but Henriquez plans to finish it by Monday. 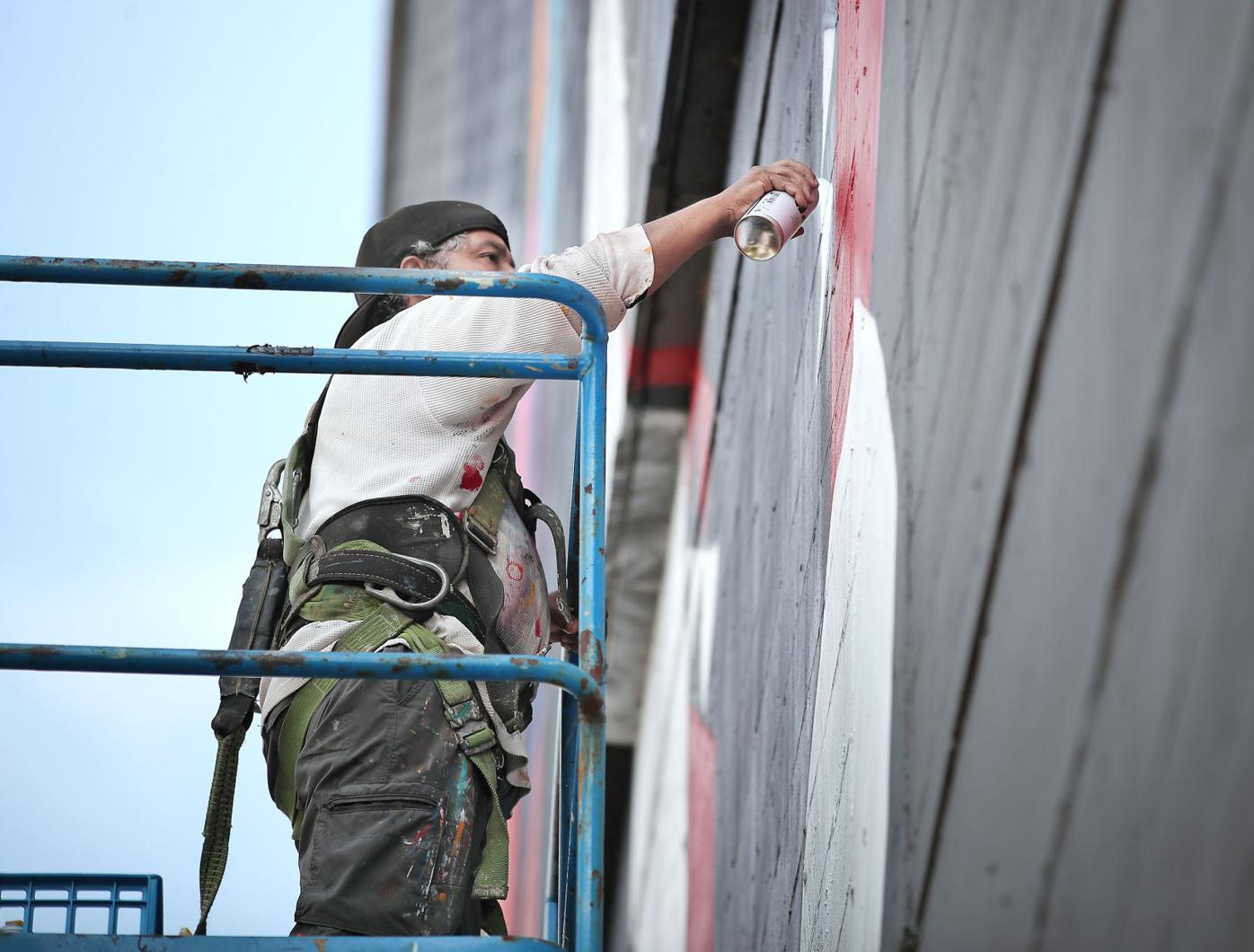 Artist Jeff Henriquez works Wednesday on his new mural on the side of the Prospect 101 building at the corner of Main and Milwaukee streets in downtown Janesville. 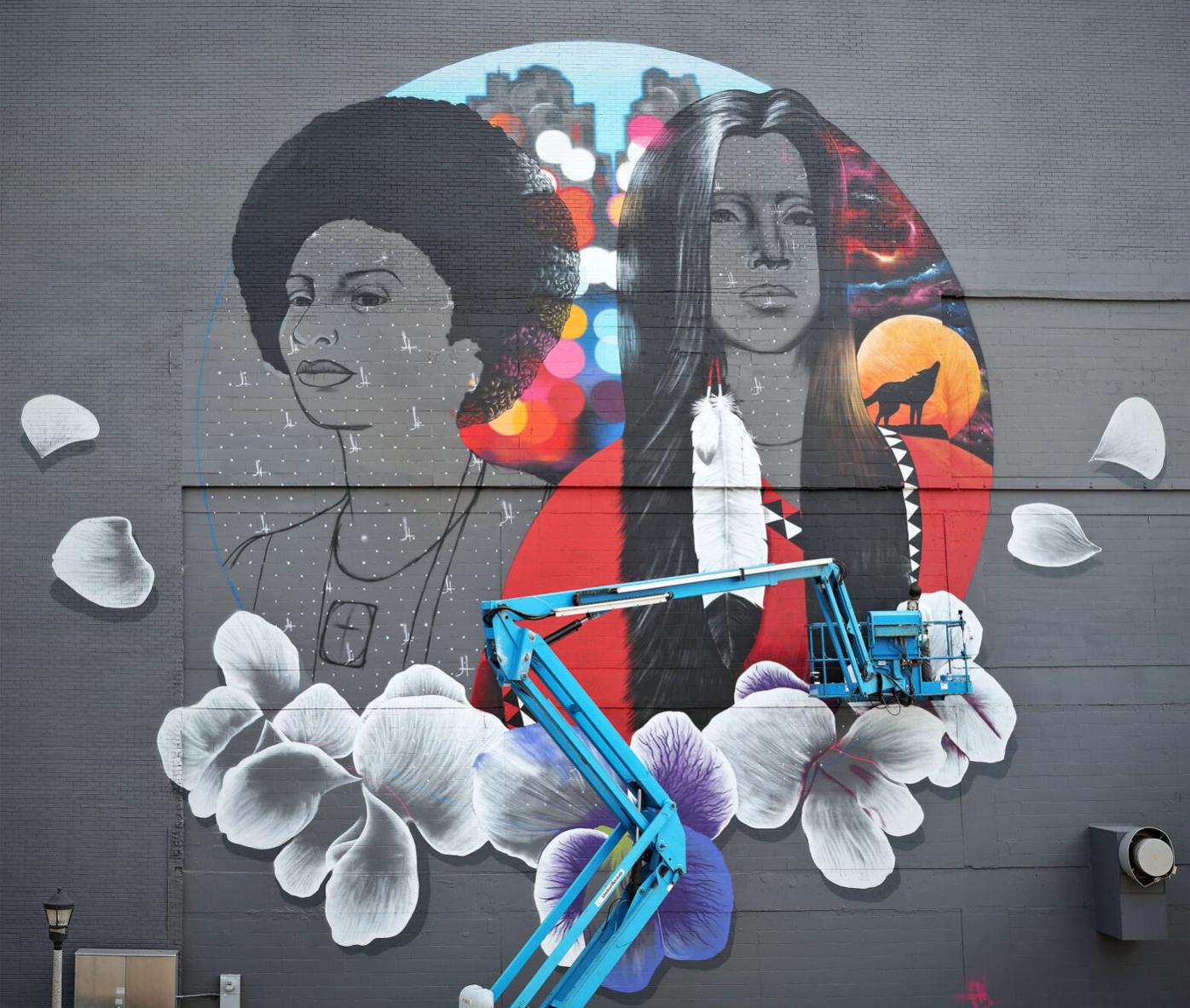 Artist Jeff Henriquez works on part of his new mural in downtown Janesville on Wednesday. The mural is about 65 feet tall by 70 feet wide, and the theme is diversity and women’s history. 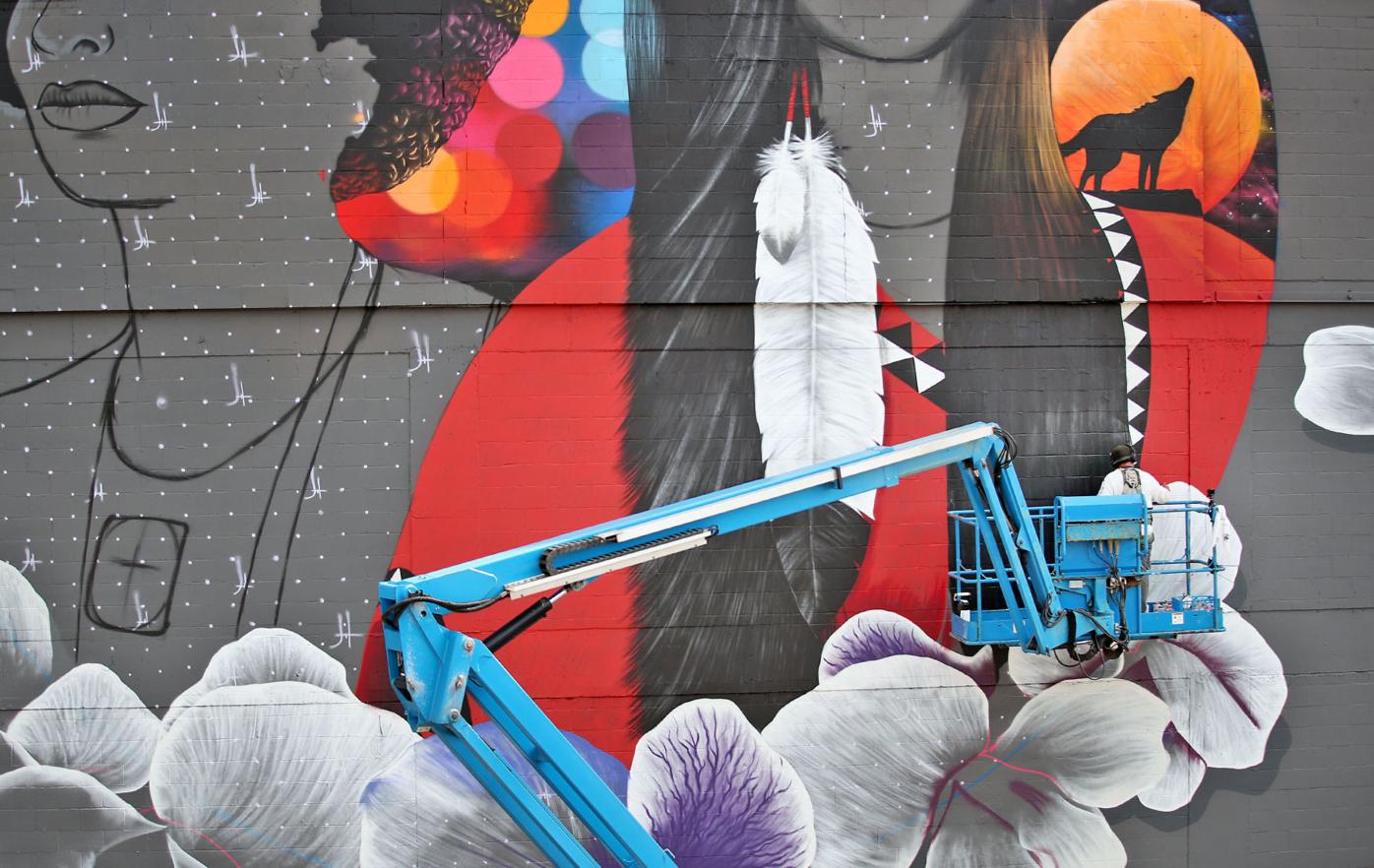 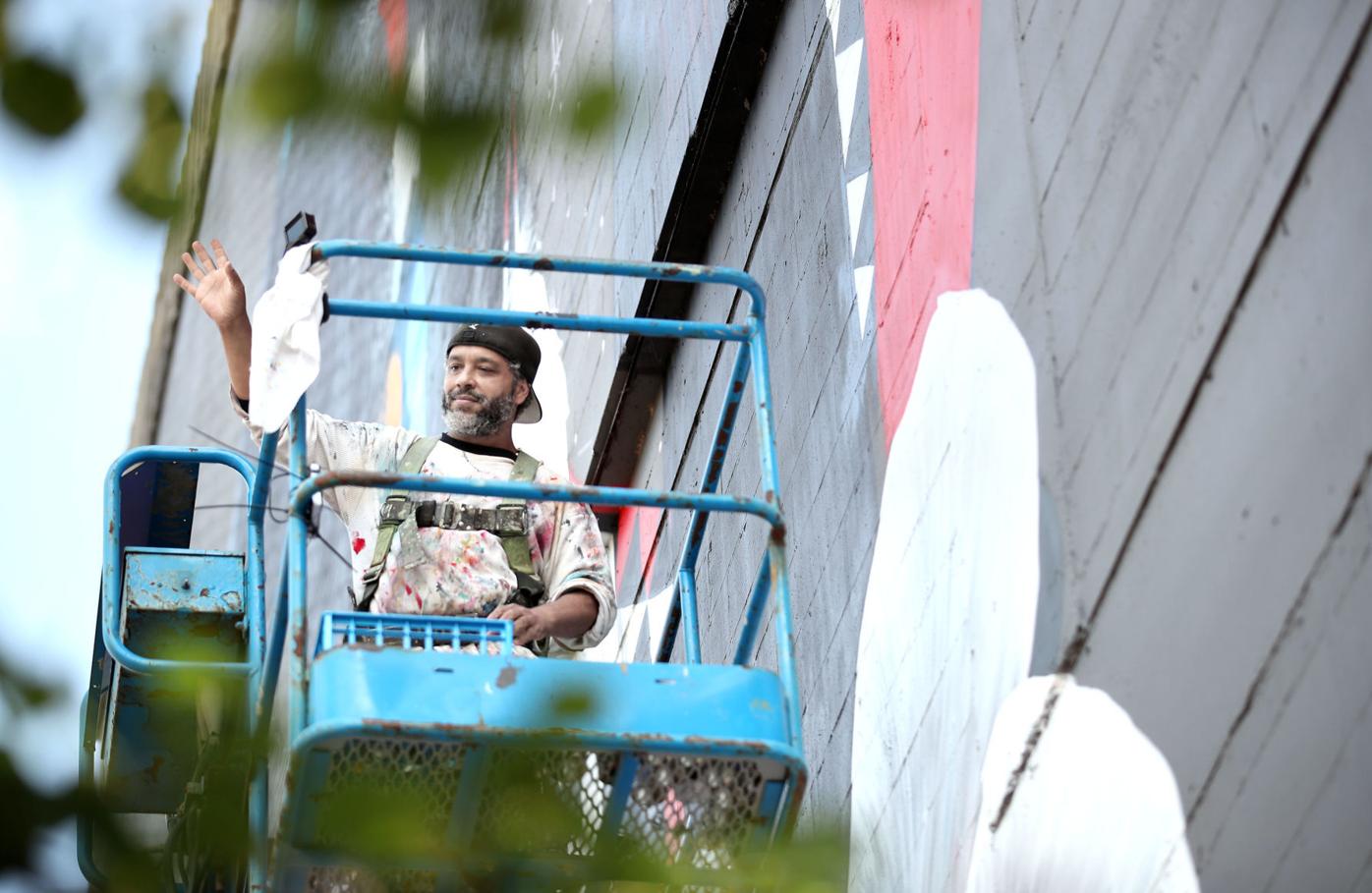 Artist Jeff Henriquez waves goodbye to a group of students who stopped by for their art class as he returns to working on his mural Wednesday in downtown Janesville. 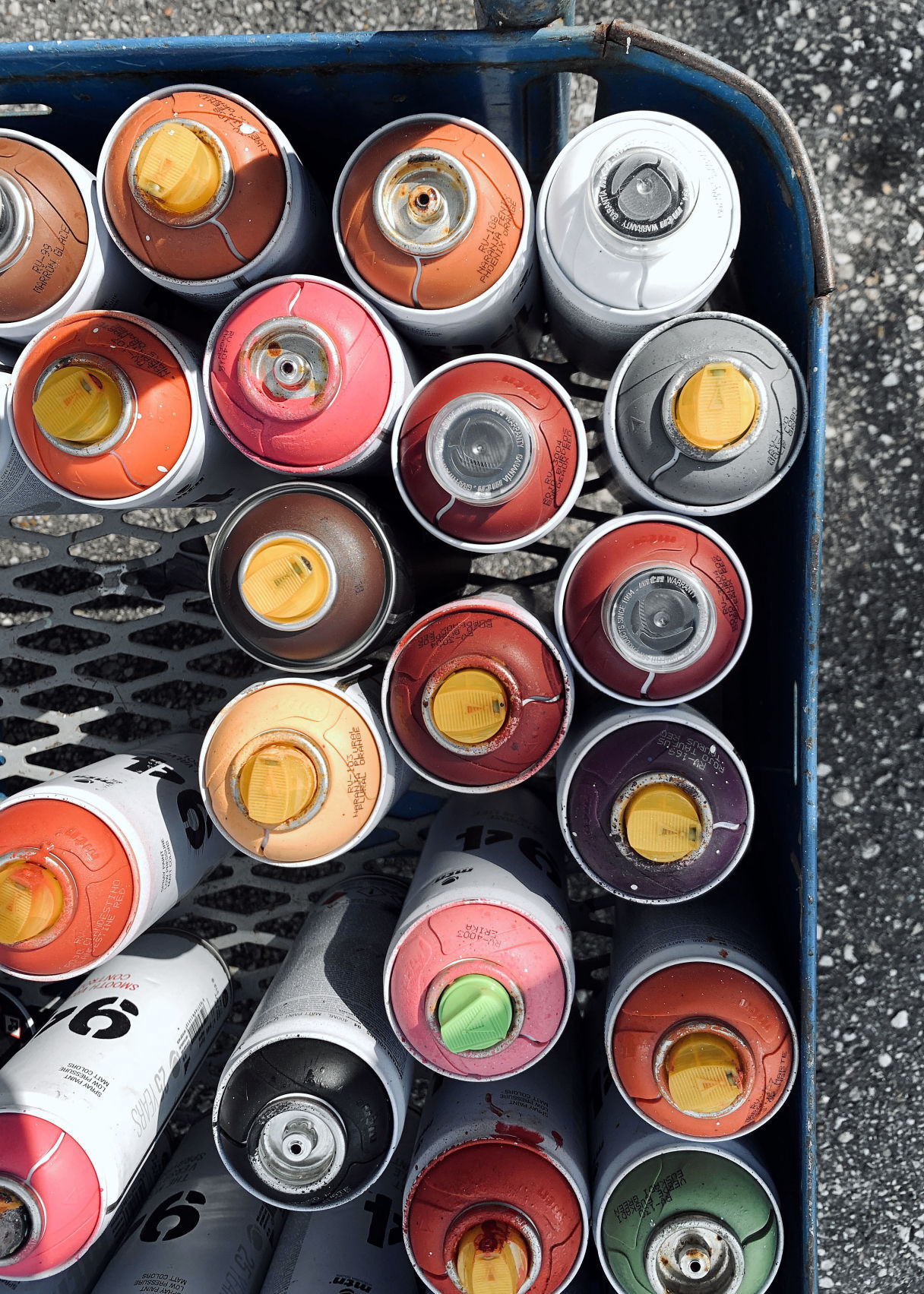 A sampling of the colors used by artist Jeff Henriquez on his new mural in downtown Janesville. 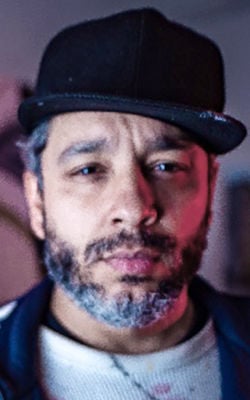 Artist Jeff Henriquez works Wednesday on his new mural on the side of the Prospect 101 building in downtown Janesville. The mural’s theme is diversity and women’s history. The work was delayed by last week’s rain, but Henriquez plans to finish it by Monday.

A sampling of the colors used by artist Jeff Henriquez on his new mural in downtown Janesville.

They are the focal points of a large mural that could be completed by Monday and likely will be catching eyes for years to come.

The mural is steeped in symbolism, which artist Jeff Henriquez explained in an interview Wednesday.

Henriquez was commissioned by organizers of the recent downtown festival Art Infusion 2020. They asked him to create something about women in history and to mark the 100th anniversary of the constitutional amendment that gave women the right to vote.

The woman on the left is Black. Art Infusion organizer Nigella Ryan suggested that the county’s participation in the Underground Railroad—routes Black people used to escape slavery in the South—be represented, Henriquez said.

“I sort of ran with that a little bit,” Henriquez said during a break in the North Main Street parking lot where he is working.

The mural is on the side of the Prospect 101 building at the corner of Main and Milwaukee streets, but it is best seen from North Main Street, near the Looking Glass tavern.

The Black woman wears a locket that will bear the image of Harriet Tubman. Tubman not only guided escapees to freedom; she also was a Union Army scout in the Civil War and later advocated for a woman’s right to vote.

Janesville was a home of abolitionist sentiment, hosting speakers Abraham Lincoln and Frederick Douglass in 1859. The Milton House in nearby Milton, now a museum, is a documented Underground Railroad stop.

Not yet painted is a window with panes of different colors. Henriquez said lights in church windows were used to guide those fleeing to freedom, with different colors representing safety or danger, for example.

Alongside the Black woman is a Native American woman wearing a red shawl.

Henriquez made the massive mural depicting the Sauk leader Black Hawk on a wall one block south in 2019. He said that work’s Native American theme helped inspire his newest mural.

“I wanted to add more representation for them. They do not have enough,” Henriquez said.

Two feathers hang from the woman’s hair, a small one representing the youth and a large one representing elders. The large feather under the smaller feather symbolizes elders’ support, guidance and protection for youth.

Next to the Native American woman is the image of a wolf howling at the moon with stars overhead. The wolf represents running with a pack or a tribe, Henriquez said. The stars above are a galaxy, symbolizing infinity.

Henriquez noted Native Americans have had a strong presence in this region since long before history was recorded.

Between the two women is an out-of-focus city skyline, symbolizing modern times.

The flower and petals along the bottom of the artwork are a wood violet, the state flower.

Henriquez knows passersby will be struck by the image, which is about 65 feet tall and 70 feet wide. He said how they interpret it will be up to them.

“It’s like a painting once it’s on the wall. … The viewer is going to take what they want from it, and you just have to allow them to do that,” he said.