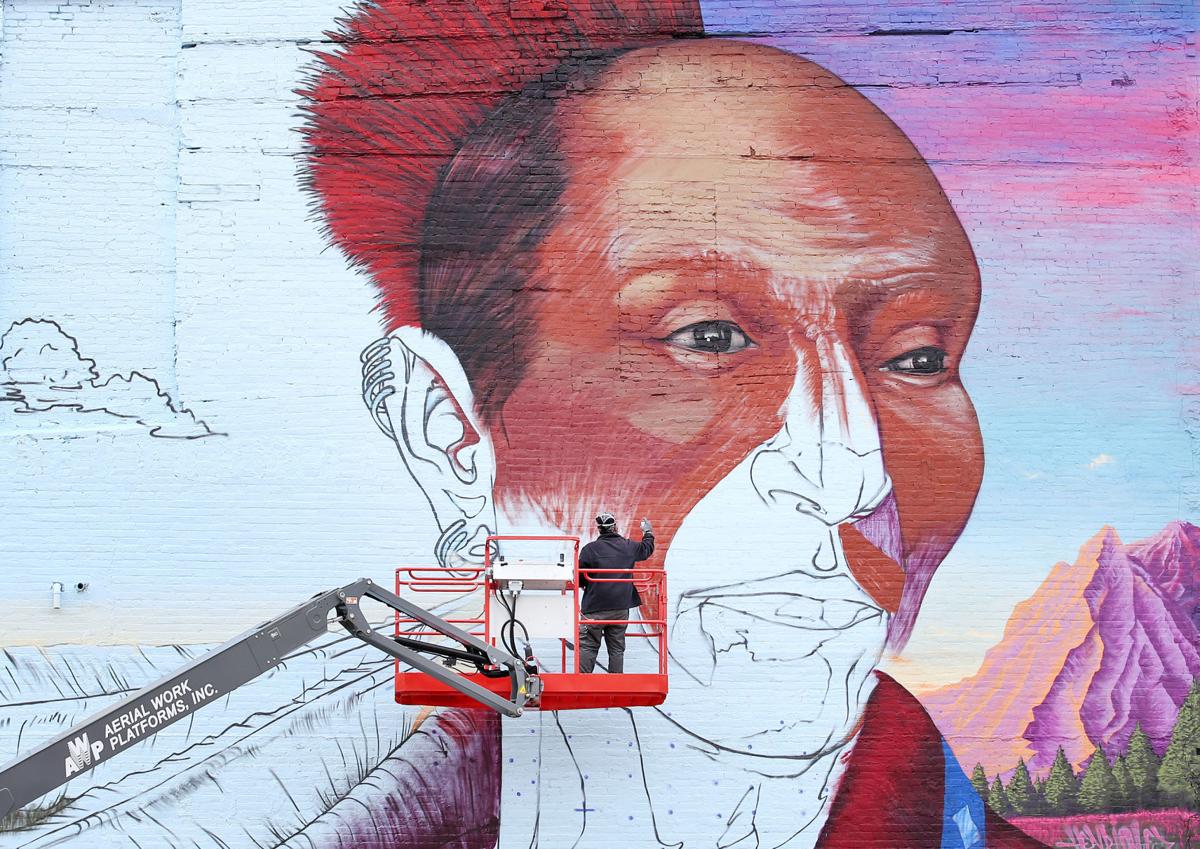 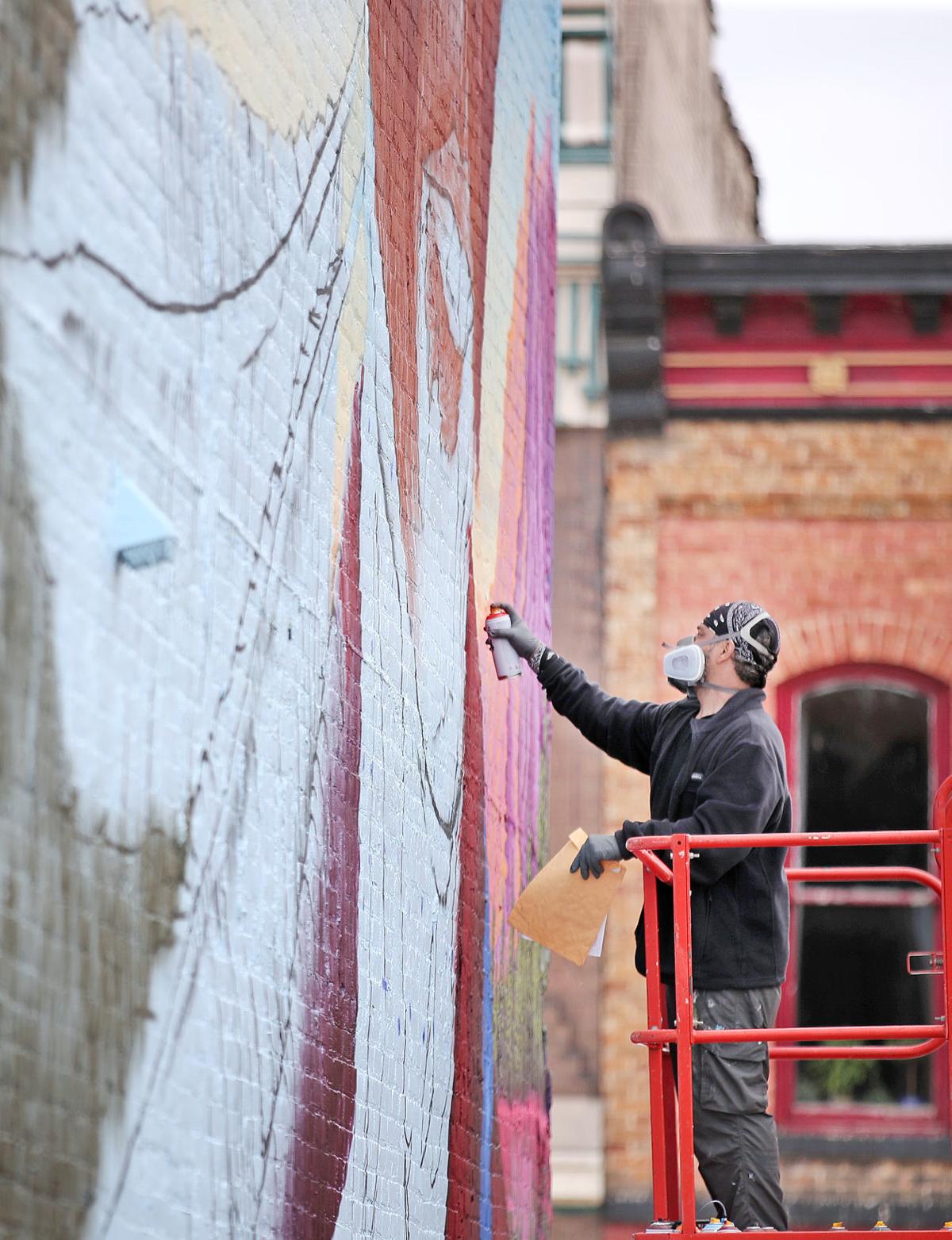 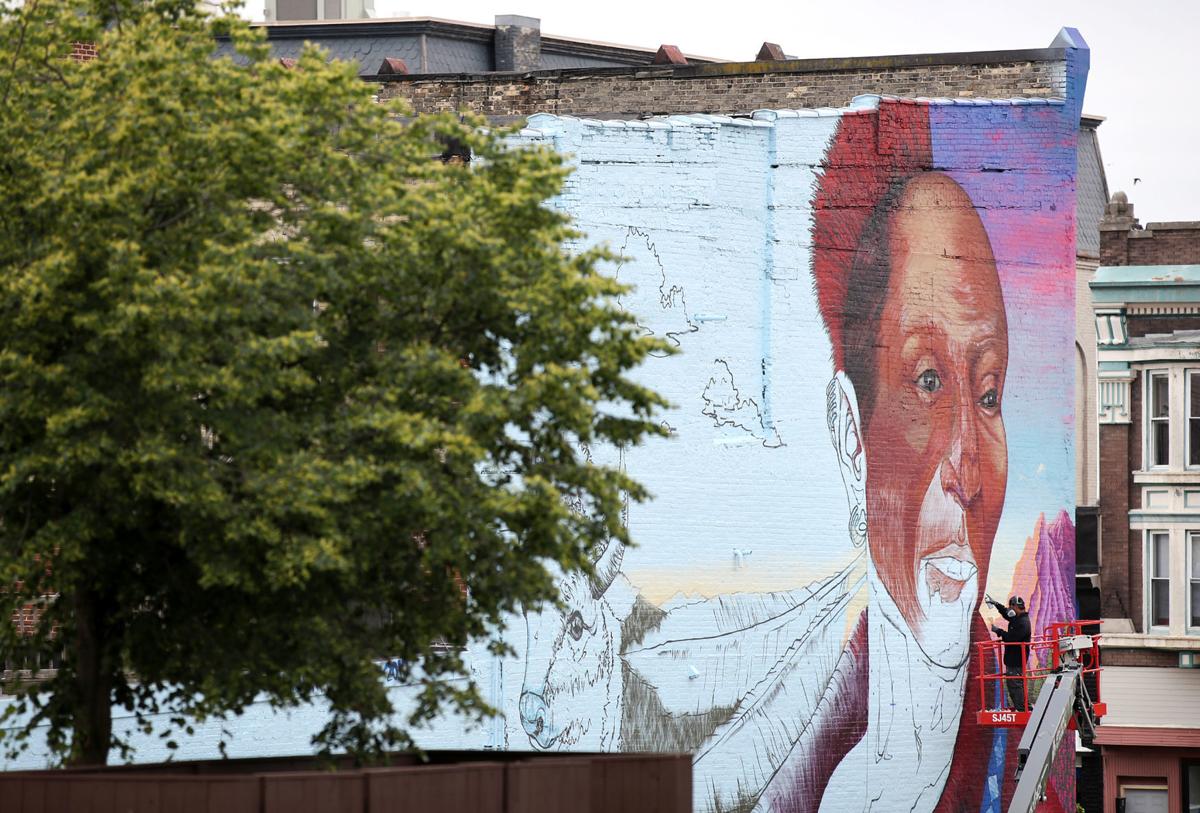 Artist Jeff Henriquez paints the face of Black Hawk on his mural in downtown Janesville on June 17. 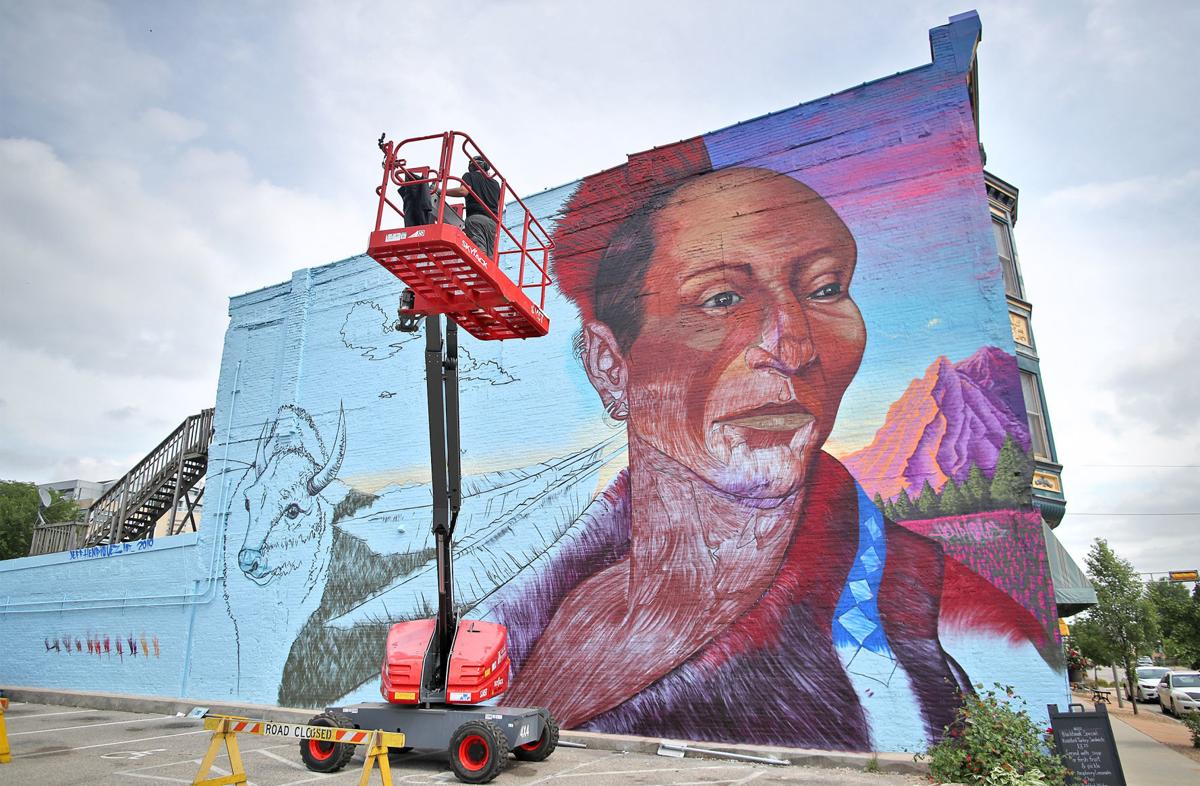 Artist Jeff Henriquez moves away from the wall to look at his latest addition to the mural of Black Hawk while working in downtown Janesville on June 17. 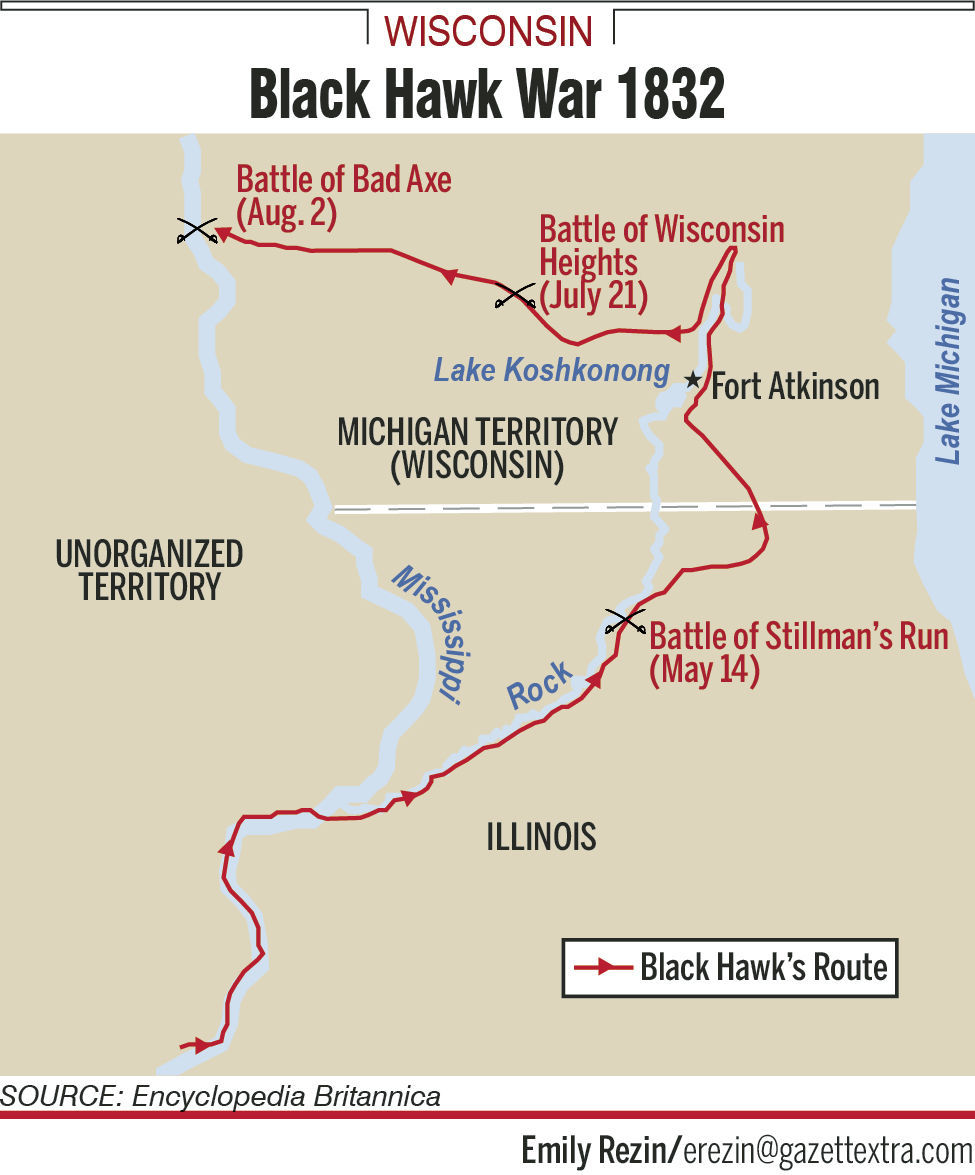 Artist Jeff Henriquez paints the face of Black Hawk on his mural in downtown Janesville on June 17.

Artist Jeff Henriquez moves away from the wall to look at his latest addition to the mural of Black Hawk while working in downtown Janesville on June 17.

The warm colors and golden hour backdrop add a point of interest to Main Street, but the symbolic mural might lead some to ask: Who was Black Hawk?

Nigella Ryan, who helped commission the mural, said a painting of Black Hawk was her idea. For all the places named after Black Hawk, there was no major, local memorial to honor the Sauk leader.

It’s more accurate to say Black Hawk was a war leader than a chief. It does not appear he was ever in Janesville, but his connection to this region stems from the 1832 conflict now known as the Black Hawk War.

Black Hawk was about 65 years old when he and other elders led their tribe from present-day Iowa to Illinois. They came to protest an 1804 treaty, which the elders deemed invalid, that ceded Sauk tribal lands east of the Mississippi River, said Skip Twardosz, a man of Potawatomi heritage who has studied Black Hawk.

The Illinois militia soon chased the Sauk up the Rock River. Black Hawk’s attempt to unite other tribes and resist failed, likely because those tribes wanted to protect themselves, Twardosz said.

At Stillman’s Run, south of present-day Rockford, Illinois, Black Hawk sent three men carrying a white flag to a militia camp. One of the men was killed in the surrender attempt.

In retaliation, Black Hawk and other Native warriors charged the camp and forced the militia to flee. It was a significant victory for the Sauk, but it would not take American forces long to recover.

Black Hawk continued up the Rock River into present-day Wisconsin, chased by militia troops with considerably more men. He continued through western Walworth and eastern Rock counties past Fort Atkinson before heading west.

The Sauk eventually made it to the Mississippi River and tried to surrender once again. Militia leaders instead shot anyone trying to flee across the river, slaughtering dozens and ending the war in what is sometimes known as the Bad Axe Massacre.

Black Hawk fled Bad Axe to preserve a “war bundle” of spiritual importance before returning, Twardosz said. He was captured and held in custody for about a year before dying in 1838.

Twardosz is skeptical Janesville’s mural will start a dialogue about Native American history. The conversation could fade once the artwork’s novelty wears off, he said.

Billy Bob Grahn, a local Native American activist who is in the same drum group as Twardosz, said he appreciated Janesville’s willingness to accept a large portrayal of a Native American into its downtown. He recently led a spiritual custom known as a smudging ceremony to bless the grounds.

The drum group will eventually perform near the mural when it is finished, he said.

Maintaining the conversation will be up to groups such as Allies of Native Nations, a subset of the Diversity Action Team of Rock County. Grahn is part of that group and so is Holly Denning, a senior sociology lecturer at UW-Whitewater who also teaches within the American Indian Studies program.

Denning said the lone image won’t go far unless schools take field trips to the site or more Native art appears downtown. The Allies of Native Nations is working on a guide that will provide more information about Black Hawk, she said.

Her American Indian studies introductory class always fills quickly, which gives her hope people are willing to learn, she said.

Grahn was optimistic and cited his own ongoing effort to get state officials to rename Columbus Day as Indigenous Peoples Day.

“The doors are slowly opening again without hate,” he said. “People are slowly welcoming some of the truths of Native Americans, their true history.”

A white bison calf is a sacred symbol of harmony for many Native Americans. Though she eventually turned brown, Miracle attracted visitors from across the country before she died in 2004.

Jeff Henriquez created a larger-than-life mural of Black Hawk, a Sauk tribe leader, in downtown Janesville. View a time-lapse of the process.