The Fulton Town Board approved a 440-acre solar farm for this property, bordered by County M on the south and West Pomeroy Road on the north, after a public hearing Tuesday night. 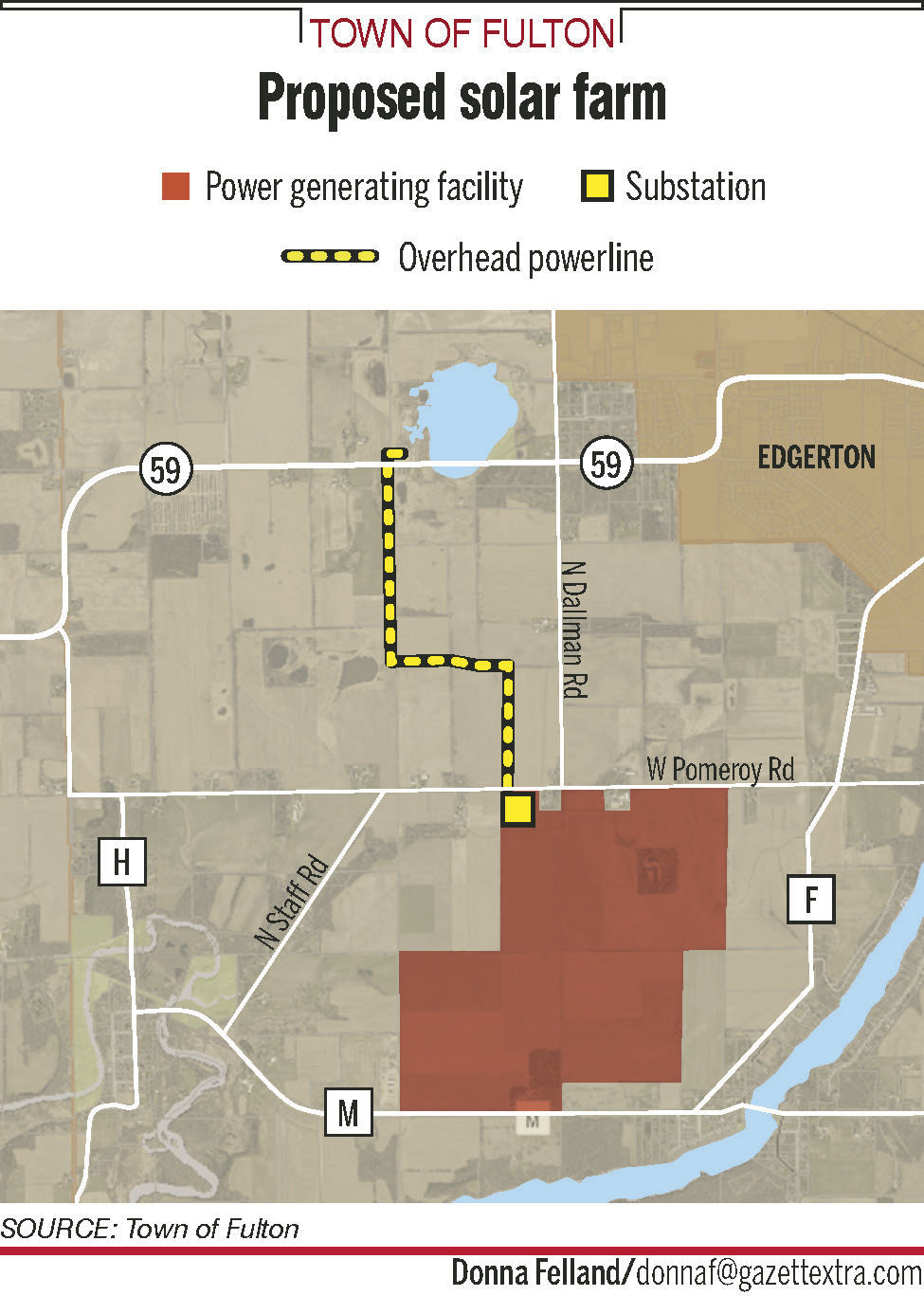 The Fulton Town Board approved a 440-acre solar farm for this property, bordered by County M on the south and West Pomeroy Road on the north, after a public hearing Tuesday night.

A 440-acre solar farm is coming to the town of Fulton after the project was approved unanimously by the town board at its meeting Tuesday.

The town hall was filled Tuesday with residents who raised concerns about the project to Ben Adamich with Geronimo Energy. They asked about fire hazards, safety, environmental impacts and keeping the project local.

Sandy Papendieck said her family moved to a nearby house this summer for the space and nature-filled view. She has concerns about property value.

“If we want to resell our home ... there’s no way we’re going to be able to sell it for what we bought it (for),” Papendieck said.

Adamich said a “significant” amount of research and case studies on homes near other Midwest solar power plants—complexes larger than this one—show the plants have no impact on property values.

He called solar a “good neighbor.”

Adamich said school district strength and having a view in the country or of nature often are larger drivers of property value. Solar farms prevent large housing developments from taking that, he said.

He said there is almost no noticeable sound that emits from the solar panels, and the only light at night is one at the entrance to the property for security.

Construction is proposed to start in spring 2021 and likely will take eight to 10 months, depending on the weather, Adamich said. The farm will operate for 25 to 35 years before being decommissioned.

A handful of full-time jobs will be added to maintain and run the facility, and about 150 jobs will be created during construction, Adamich estimated.

The panels will be in rows from north to south and rotate for maximum exposure as the sun moves across the sky. The panels’ maximum height will be 12 to 15 feet.

Decommissioning will include the solar modules being dismantled, steel being taken out of the ground and recycled or scrapped and fencing, and gravel roads removed. The company will chisel plow the ground to ensure it is good for rural or agriculture use the next year. Money is put aside at the beginning of the project for decommissioning, he said.

Fences around the property will be 7 feet tall topped with barbed wire to comply with national electric code requirements.

Trees, shrubs, prairie grass and other plants will be planted to shield the fencing from view, Adamich said. The conditional-use permit includes a clause that requires the company to update the town on the growth progress of the plantings.

Multiple residents asked about outsourcing jobs to other countries, but Adamich said construction will be done as locally as possible. The company will contract with as many local contractors as it can, but some of the more specialized workers might need to come from other states.

While she said she recognizes some benefits to solar farms, Papendieck said residents who live near the property should be compensated in some way.

“I’m not saying not in my backyard. Somehow we feel like we need to be compensated or there needs to be some sort of compromise. I think our views of not being happy that this is being put in when we bought this (home) for the view. … I’m sure you’re going to be making money off this, and that’s great. The farmers are going to be making money off of it, that’s great,” Papendieck said.

“But I don’t like that it’s at my cost. I’m losing, whether it’s the beauty that I’m going to be missing out on that I bought the property for or is it the money I’m not going to be making when we fix it up and sell it?”

Evan Sayre, town board president, and Randy Thompson, planning and zoning commission member, thanked residents for their input but said the application was complete and allowable with the conditional-use permit.

“At this time I don’t know of any loose ends that have not been addressed,” Sayre said.

“From my standpoint, this proposal does fit into the AE and AG zoning district in terms of a compatible use, and that’s what’s in our zoning ordinance,” Thompson said.