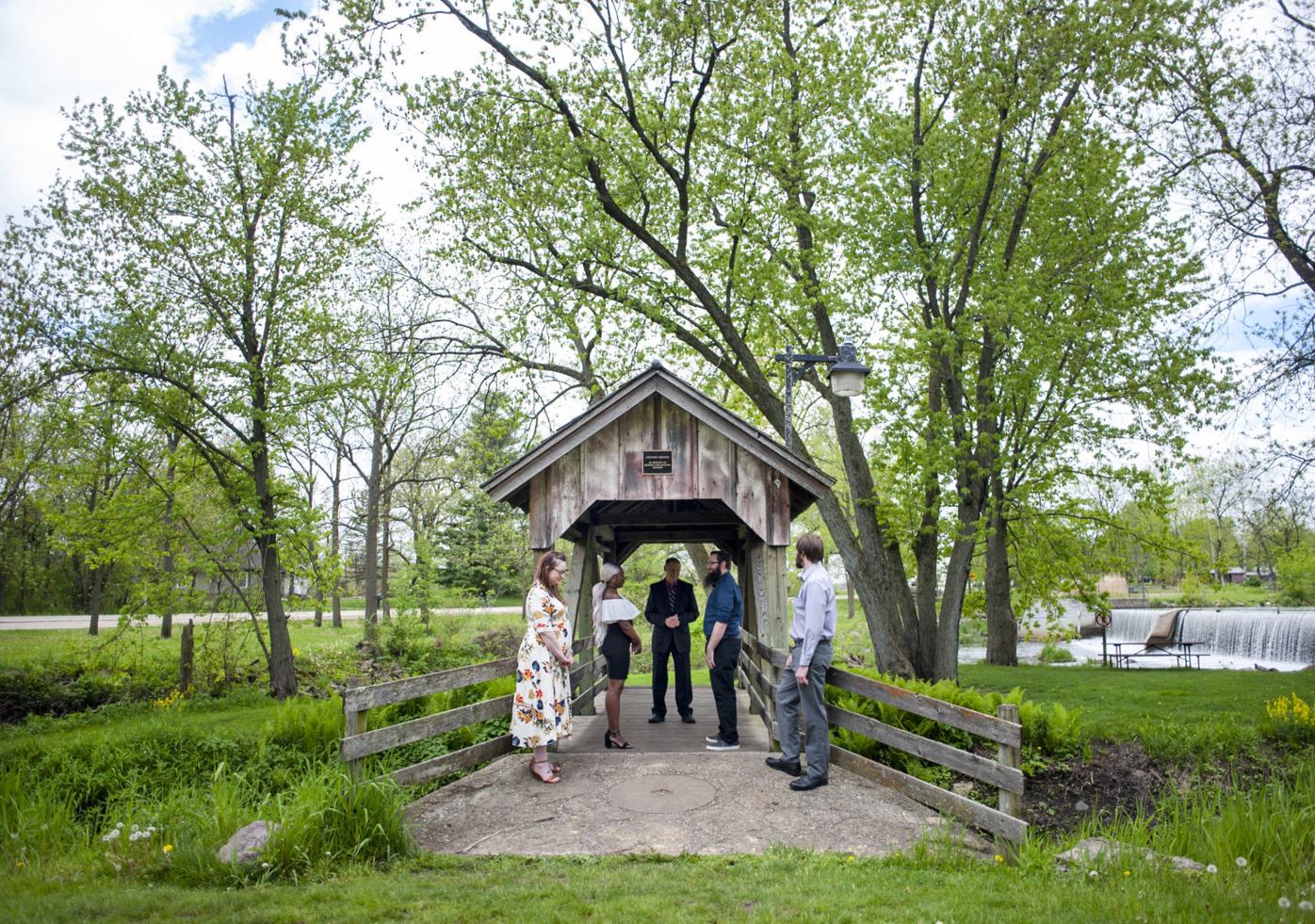 Nathan and Dorothy Lewis are joined by Nathan's sister and a friend during their wedding Wednesday at Beckman Mill County Park west of Beloit. Court Commissioner Stephen Meyer performed a series of weddings. 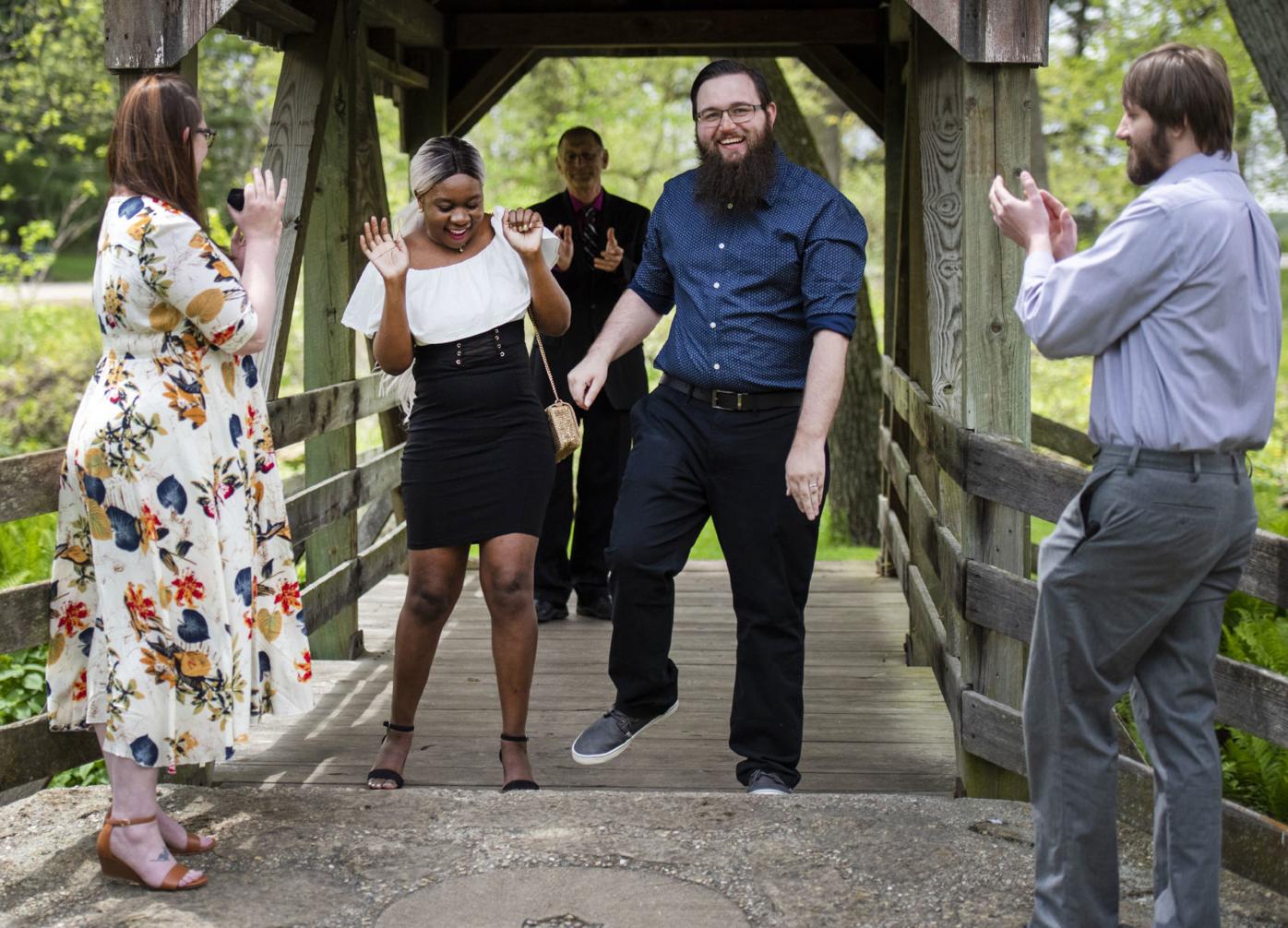 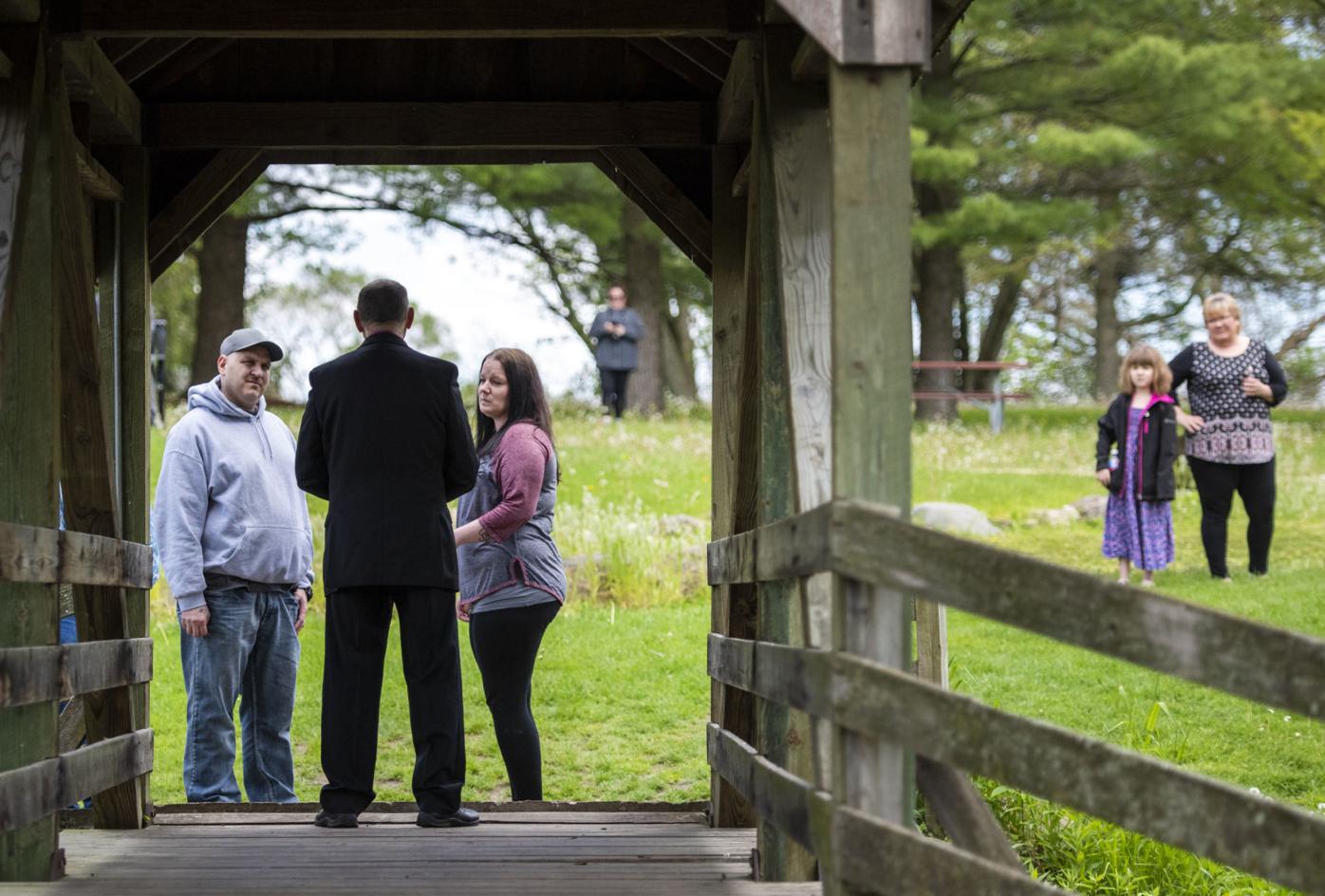 Nathan and Dorothy Lewis are joined by Nathan's sister and a friend during their wedding Wednesday at Beckman Mill County Park west of Beloit. Court Commissioner Stephen Meyer performed a series of weddings.

Stephen Meyer broke out in a wide smile Wednesday afternoon as birds chirped and water flowed beneath the Griinke Foot Bridge at Beckman Mill County Park.

Meyer’s smile was reciprocated by others as the court commissioner presided over six weddings at the park.

Courthouse weddings were moved Wednesday to the park because of COVID-19.

The weddings were the first since the county chose to suspend all weddings at the courthouse after the large amount of human contact in the clerk’s office following the April 7 elections.

Meyer has been marrying couples in Rock County for 28 years and said he enjoys working with the people he weds.

He was happy to be back Wednesday prompting couples through their vows.

“I just love the whole thing. It’s very nice to meet people, both the people that are getting married and the folks that are with them,” he said.

He said with a laugh that while COVID-19 might cause some complications, quarantine could offer newlyweds an early test.

“This is a good time to test the early stages of the marriage,” he said.

Nathan and Dorothy Lewis of Janesville were among the couples who became husband and wife Wednesday. The pair met at work and have dated for more than four years.

“Basically, everything we had got canceled because of the virus, and I just kind of stumbled across that the city of Janesville was doing this amazing thing, and I was just ready for her to be my wife and thought we’d take advantage of it,” Nathan said.

The couple had to cancel their original venue, cake and wedding date.

Dorothy’s family from Kenya was supposed to be in attendance for the original wedding celebration, but COVID-19 required them to stay put.

“We just hope it’s something positive,” Nathan said. “I mean, that’s the one thing because of our plans I tried to keep pushing through like, hey, we’re going to get married, this is going to be this positive thing that people are looking forward to.

The newlyweds plan to hold a larger celebration after health restrictions allow gatherings.

Each couple was allowed to bring no more than six people, making nine the maximum number of people, including Meyer, at the weddings.

Jason and Lindsey Lisiecki of Janesville also met at work and married Wednesday at the park.

The Lisieckis were ready to go to the courthouse to be married a few months ago, but it was closed because of COVID-19. When they learned it was reopening, they rushed to get on the list for Wednesday’s ceremonies, Lindsey said.

It might have been a few months later than Lindsey originally planned and in a different manner, but she said Wednesday her wedding was a blessing.

“I’m feeling amazing. There’s no other words for it,” she said.

“I married my best friend today.”