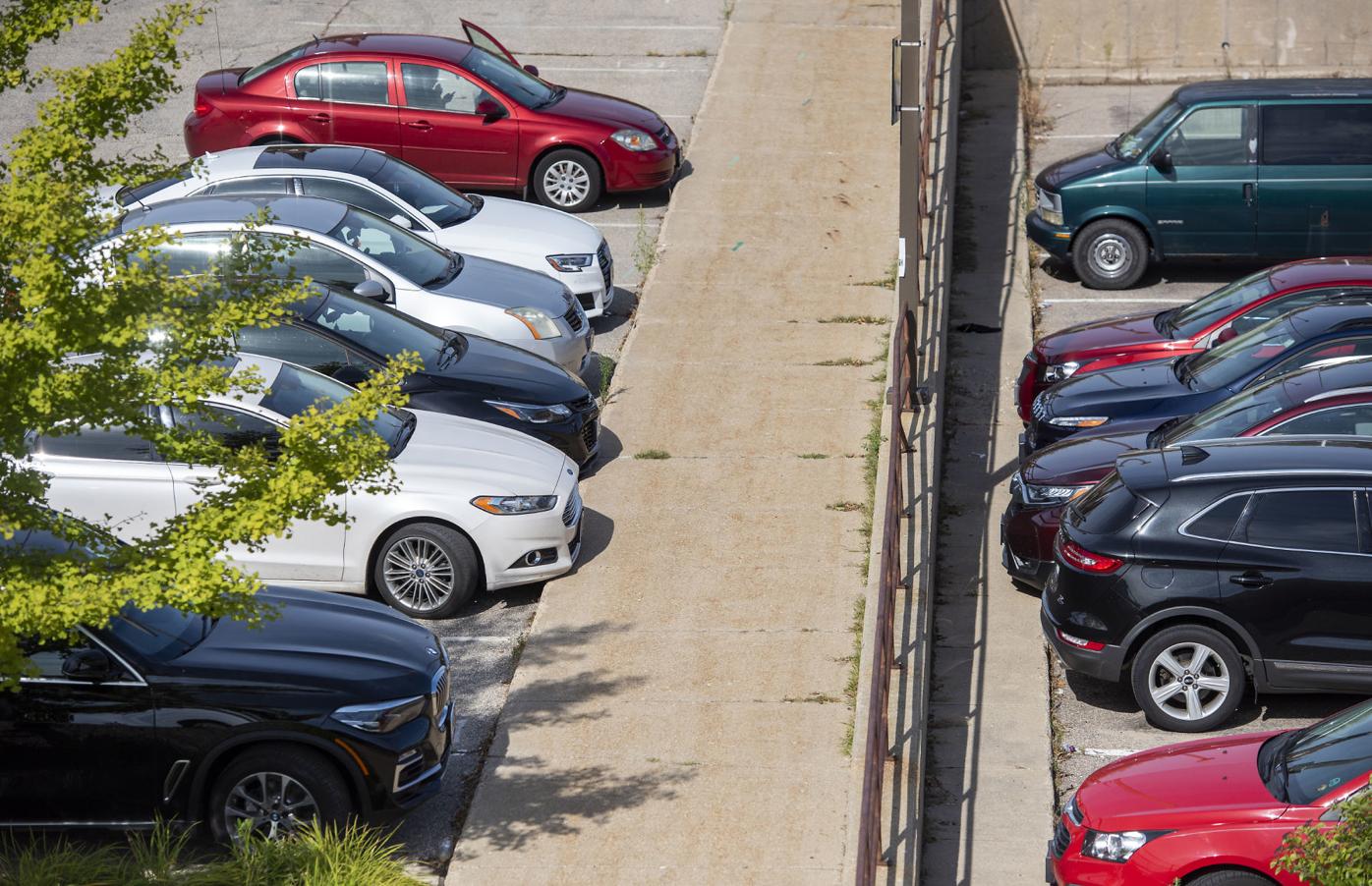 Vehicles are parked in lots along North Parker Drive in Janesville. A recent study by the city shows the number of parking stalls downtown has stayed steady since 2017, but occupancy of those spots has increased from 44% to 60%. 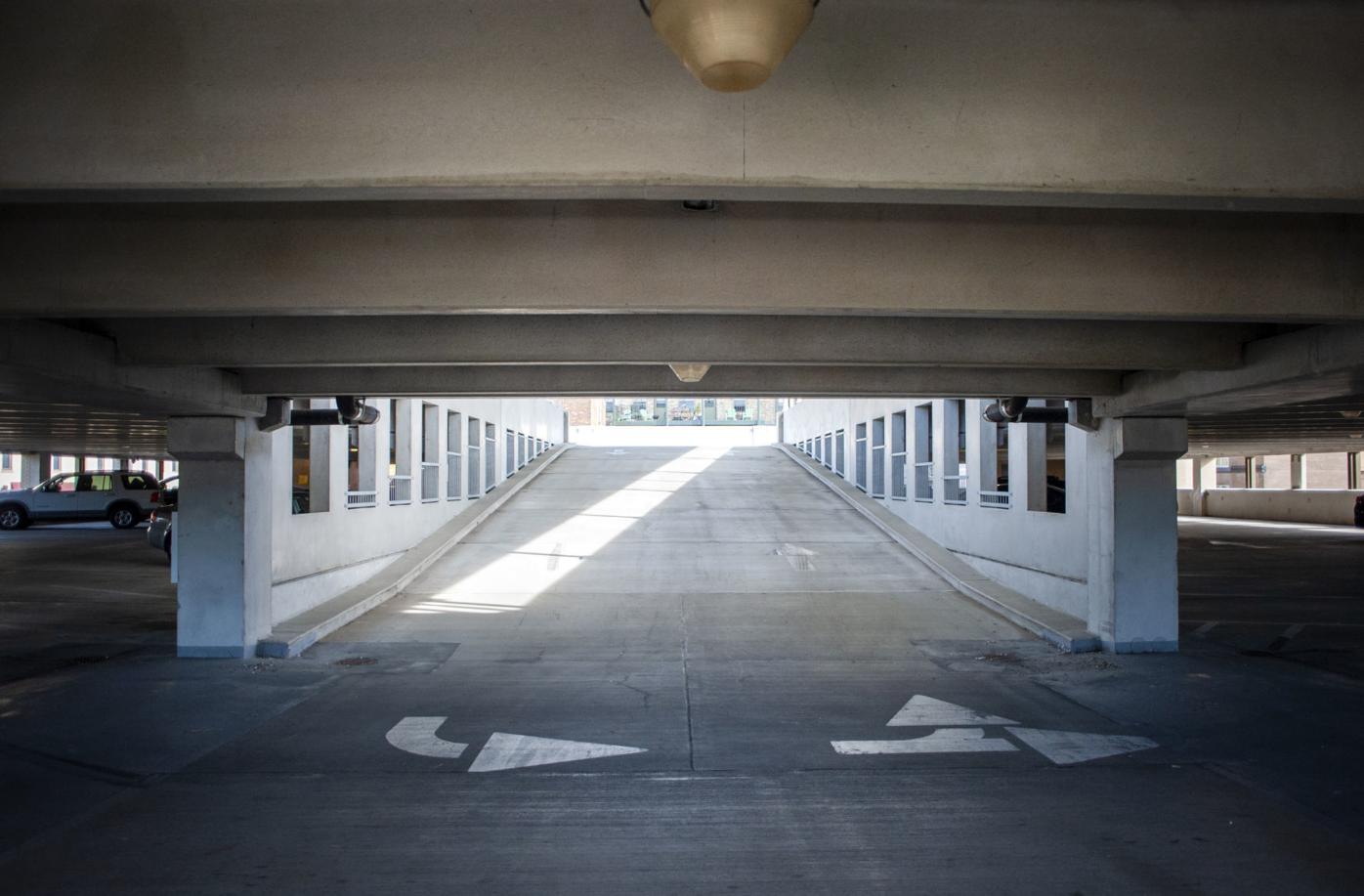 The ramp to the third floor of the parking structure at the corner of North Parker Drive and East Wall Street in downtown Janesville. 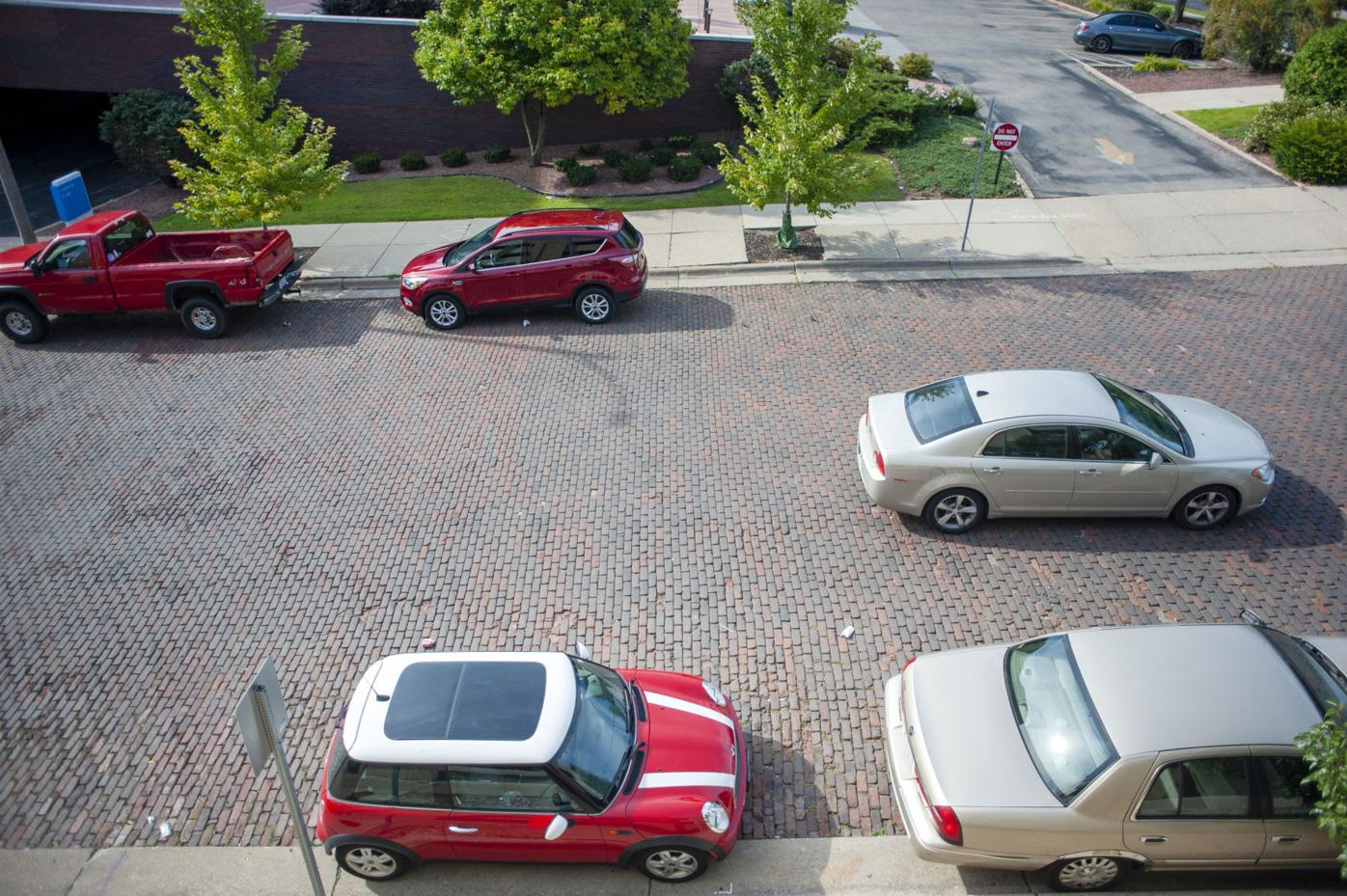 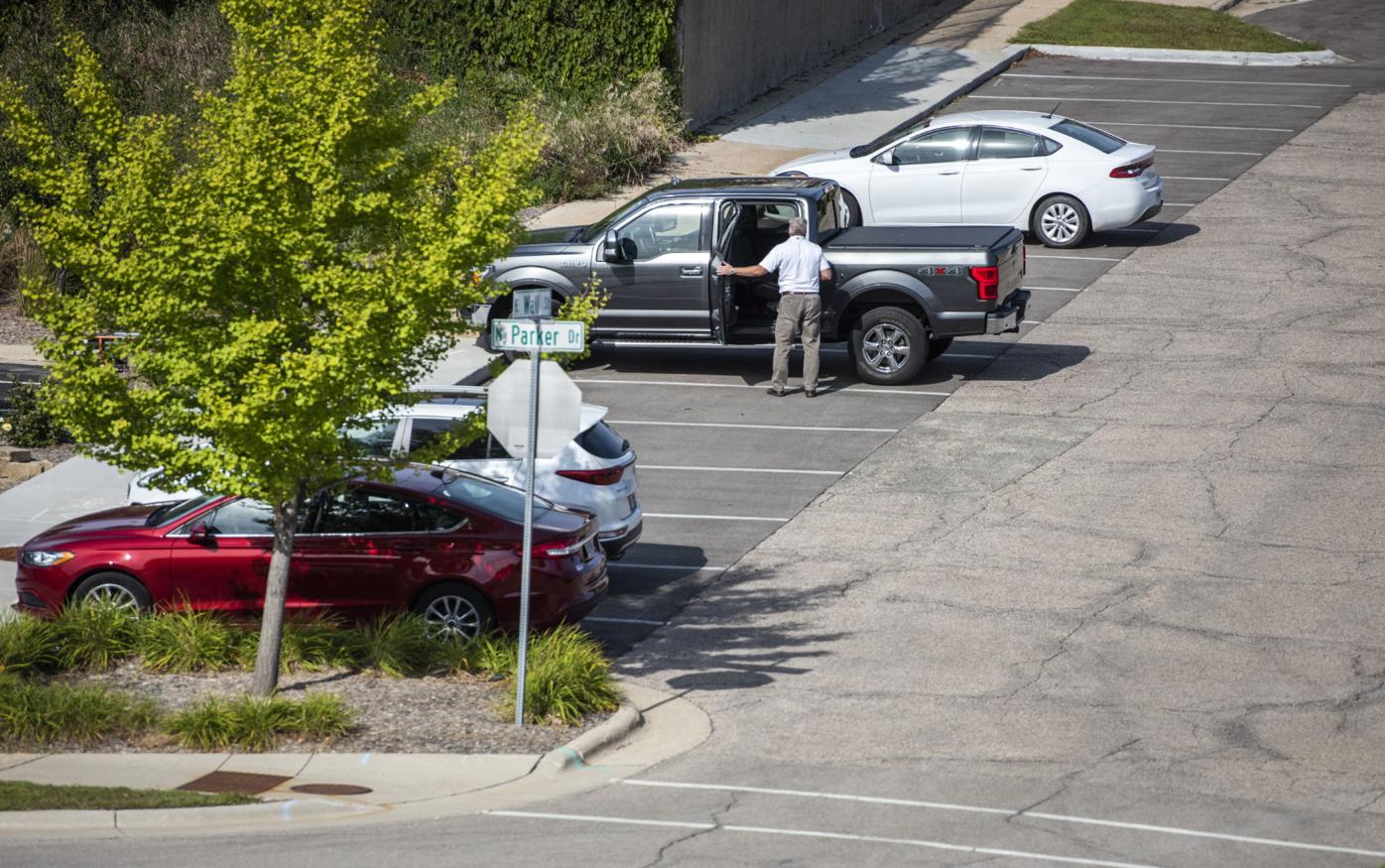 A man opens a truck door while parked in a lot on North Parker Drive in Janesville. 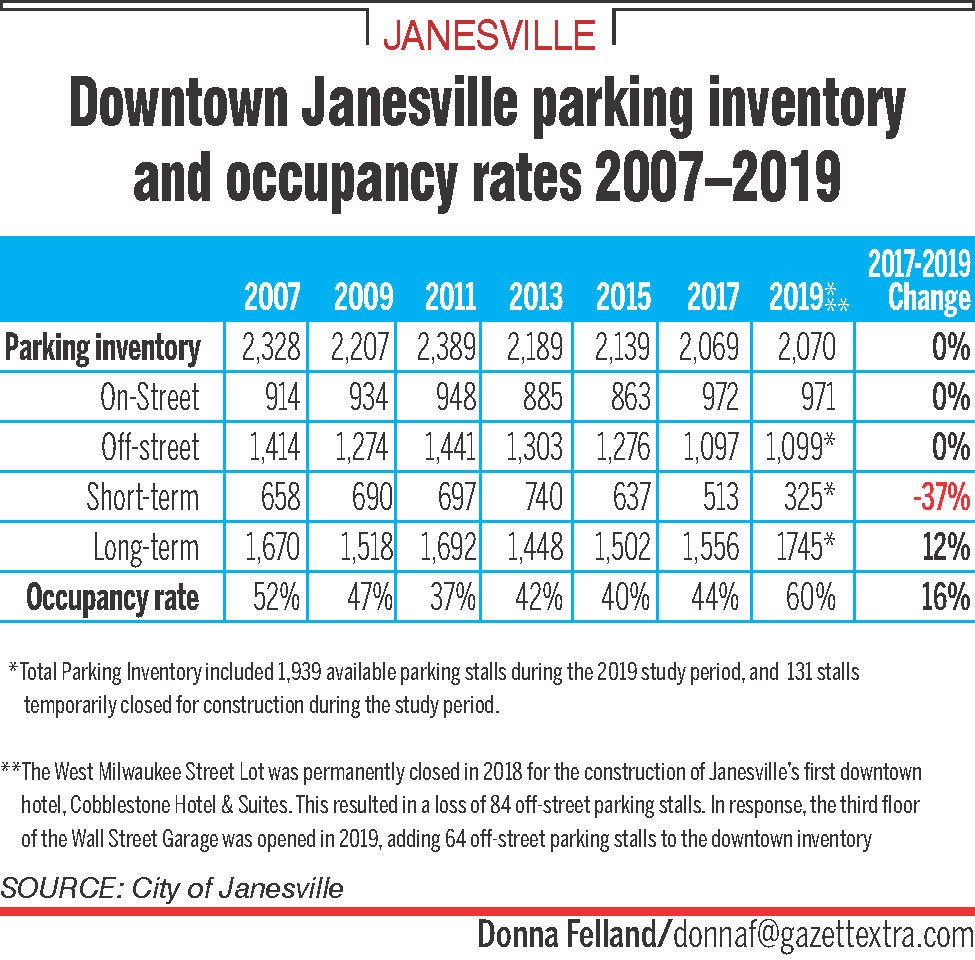 Vehicles are parked in lots along North Parker Drive in Janesville. A recent study by the city shows the number of parking stalls downtown has stayed steady since 2017, but occupancy of those spots has increased from 44% to 60%.

Finding a spot to park in downtown Janesville has gotten more difficult in the past two years, according to a recent parking study.

But city officials say there is plenty of parking to satisfy the needs of downtown.

The number of parking stalls downtown has stayed steady since 2017, but occupancy of those spots has increased 16%, according to the 2019 Downtown Parking Study.

There is no preferred occupancy rate, said Duane Cherek, planning director for the city.

The goal is to meet the needs of downtown businesses, visitors and workers. Cherek said most needs are met now, but ongoing construction has created some “hot spots” that have caused frustration.

The city studies parking inventory and occupancy every two years.

City staffers surveyed downtown parking at 10 a.m. and 2 p.m. Wednesday, May 29, and Thursday, May 30. Dates and times are chosen to “obtain information on the average daily occupancy during business hours,” according to the study.

Downtown lost 84 spots in summer 2018 when the West Milwaukee Street parking lot was replaced with the Cobblestone Hotel, which opened last week.

The loss of spots was made up, somewhat, when the city opened the Wall Street parking garage’s third floor for public use earlier this year, adding 64 spots.

This year’s occupancy rate was affected by temporary closures of the town square east lot and portions of the upper ccourthouse lot, which took 131 spots out of play, according to the study.

The city included those 131 spots in the 2,070 stall total, according to the study.

The town square east lot will, in a year or so, be transformed into a two-way street with parking along both sides, Cherek said. That will open approximately 40 parking stalls.

The city tries to address concerns about parking by regularly looking for areas where parking could be added or enhanced, Cherek said.

The city in 2018 added 26 on-street parking stalls along Court Street after the street was converted from a one-way to two-way street, Cherek said.

About 87 on-street stalls have been added since 2016, Cherek said.

The city no longer offers leased parking spaces in an effort to create more public spaces. Some leased spaces are still in use, but after parking leases end, the city opens the spaces for public use, Cherek said.

Jeni Lindstrom said she has been pleased with parking downtown this summer.

The committee aims to educate downtown patrons on where to park and for how long. Some business owners place parking maps on windshields of cars parked in spots too long, Lindstrom said.

Lindstrom’s salon is in the heart of a “hot spot” on the west side of the Rock River that has seen a crunch in available parking. The spot has been affected by construction of the Milwaukee Street bridge and the opening of the town square.

Lindstrom’s customers have been understanding, she said, but other businesses are having a more difficult time when spots are not immediately available in front of their buildings.

Business leaders and the Janesville School District are discussing concerns about parking used for Rock River Charter School, which sits in the west side hot spot, Lindstrom said.

“The charter school has different concerns and needs as business owners,” Lindstrom said. “We are really trying to work it out. Communication is the first step. It has been good and opened our eyes up and makes us think outside the box.”

The Gazette was unable to reach a school district representative by deadline. 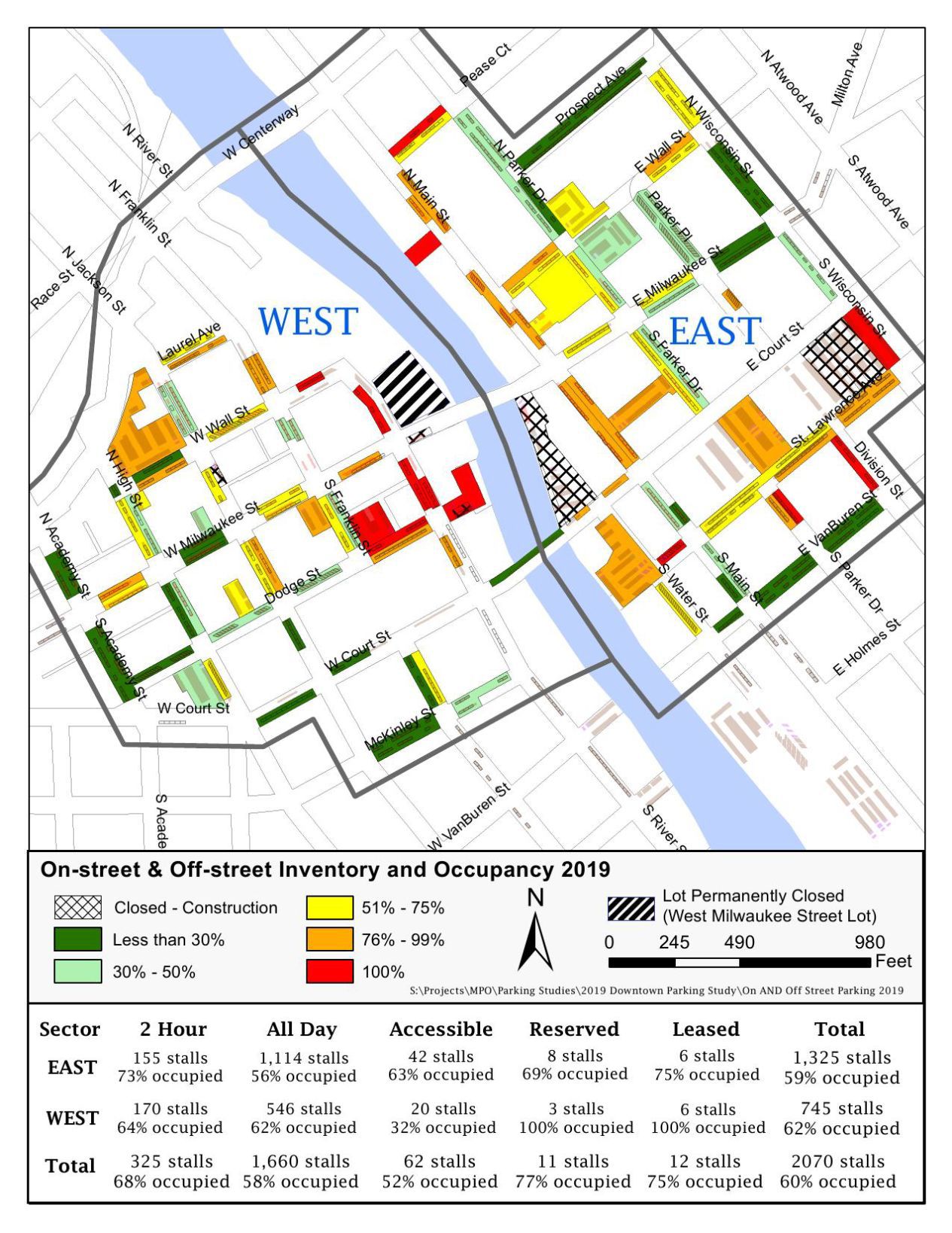 Downtown improvements come with pain, including frustrated business owners and visitors who have to get creative with where to park during construction, Cherek said.

The study shows similar occupancy rates on the west and east sides of the Rock River, despite the loss of the West Milwaukee Street lot and construction of the Milwaukee Street bridge, which has taken space from the town square east lot.

Cherek said the area directly west of the river along West Milwaukee Street is a “hot spot” where occupancy is consistently high.

The Milwaukee Street bridge project has created a physical barrier between the east and west sides, disturbing movement between the two, Cherek said.

The city hopes there will be more flow between the east and west sides after the bridge project is complete, Cherek said.

But issues on the west side likely will recur when the city reconstructs West Milwaukee Street in 2021, Cherek said.

The city is talking to business owners for input on how to go about reconstruction in a way that won’t hurt business, Cherek said.

Lindstrom said there needs to be a parking structure built on the west side of the Rock River.

The addition of downtown’s festival street and town square has brought new people to downtown, which is good, Lindstrom said. But to keep that momentum, parking accommodations on the increasingly popular west side have to be made.

More detailed, scientific studies of parking and lot usage could be done, but conducting those studies now would be premature because the downtown is experiencing change, Cherek said.

Adding parking facilities is not an immediate need unless occupancy rates are consistently above 90%, Cherek said.

The big question is whether higher occupancy rates are a result of construction or of more downtown visitors, Lindstrom said.

Projects including Blackhawk Community Credit Union’s Legacy Center at the former Chase Bank, 100 W. Milwaukee St., and the anticipated demolition of the former Town and Country building show spots where parking could be affected, but it is too early now to know.

Cherek said there is no doubt more people are going downtown, but it is not the singular cause for changes in parking downtown.

“I think it is a great thing that sometimes people can’t find a place to park,” Lindstrom said. “But it also can be frustrating.”

Downtown parking is in a serious state of flux amid a storm of major street tear ups and development projects along the riverfront. Business operators in the middle of it all are concerned about what they say is a sudden shortage of parking near their doors.