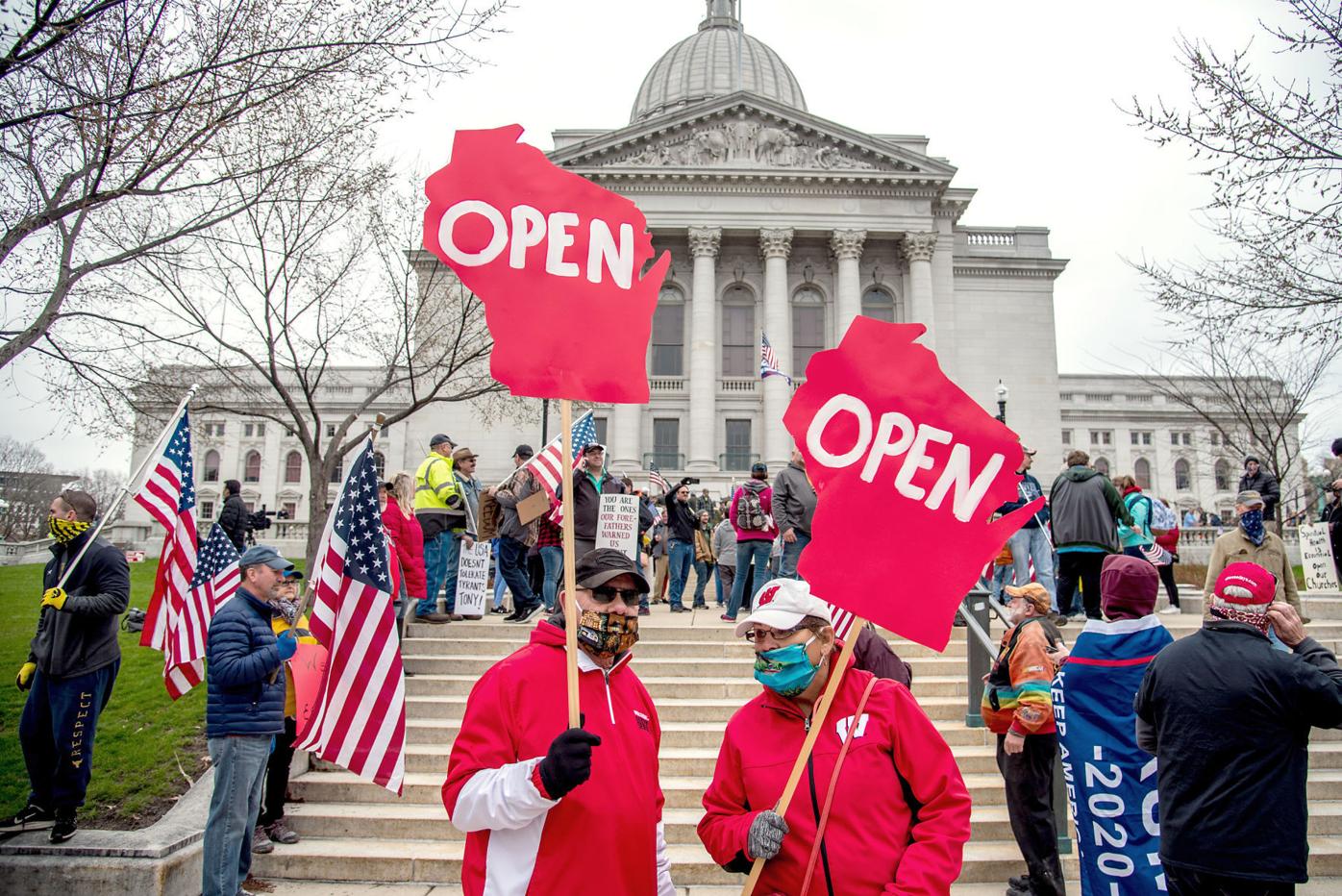 Above and below: Protesters are seen at a rally at the state Capitol in Madison on April 24. They were demanding an end to the wide-ranging shutdown of normal life and business aimed at curbing the coronavirus pandemic. Weeks later, Gov. Tony Evers’ safer-at-home order was overturned by the Wisconsin Supreme Court. Even as the state’s pandemic death toll surges, some residents believe the threat of COVID-19 is overblown and that masks are dangerous. 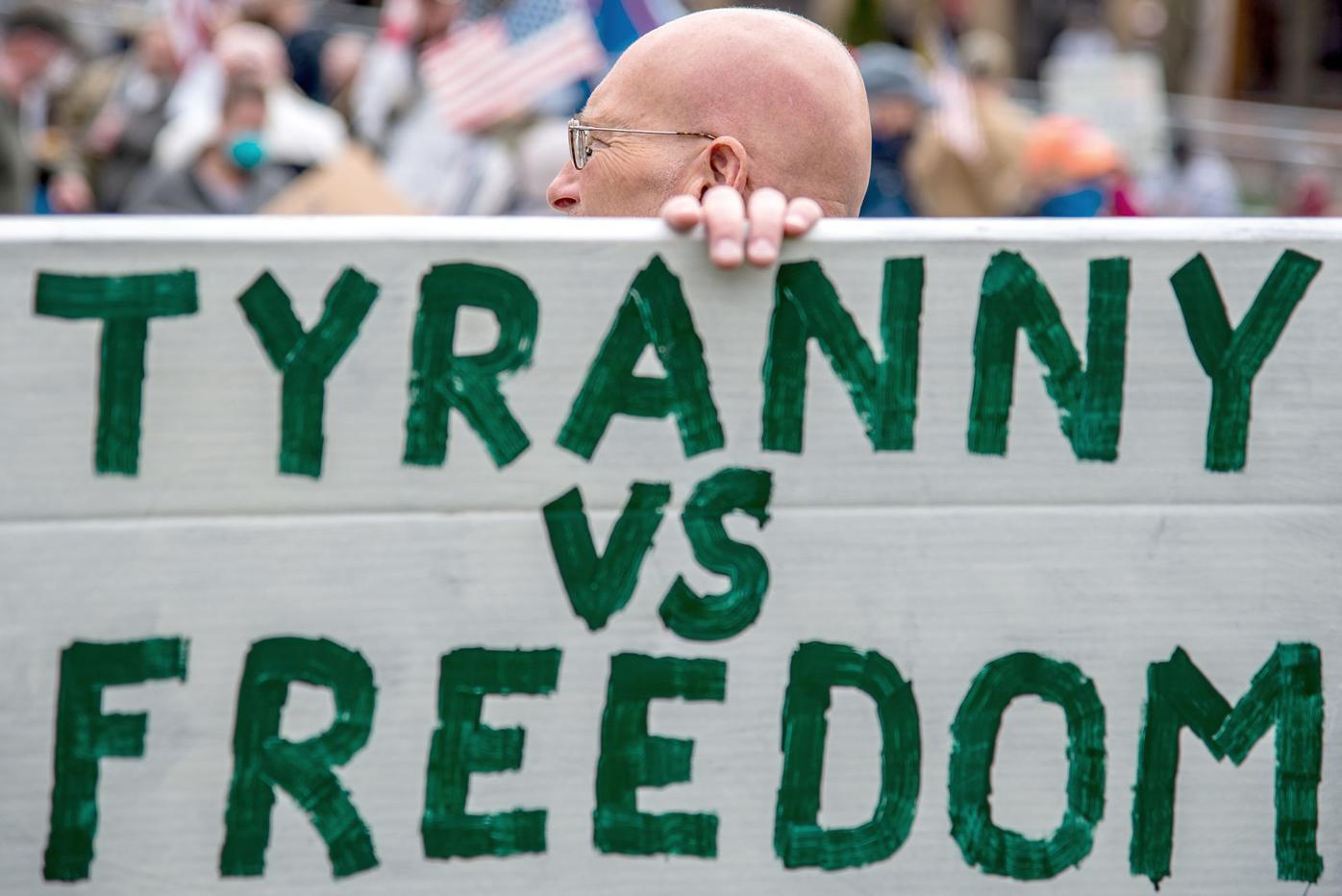 A protester holds a sign at a rally at the state Capitol in Madison on April 24. The crowds gathered to demand an end to the shutdown of normal life and business aimed at curbing the coronavirus pandemic. 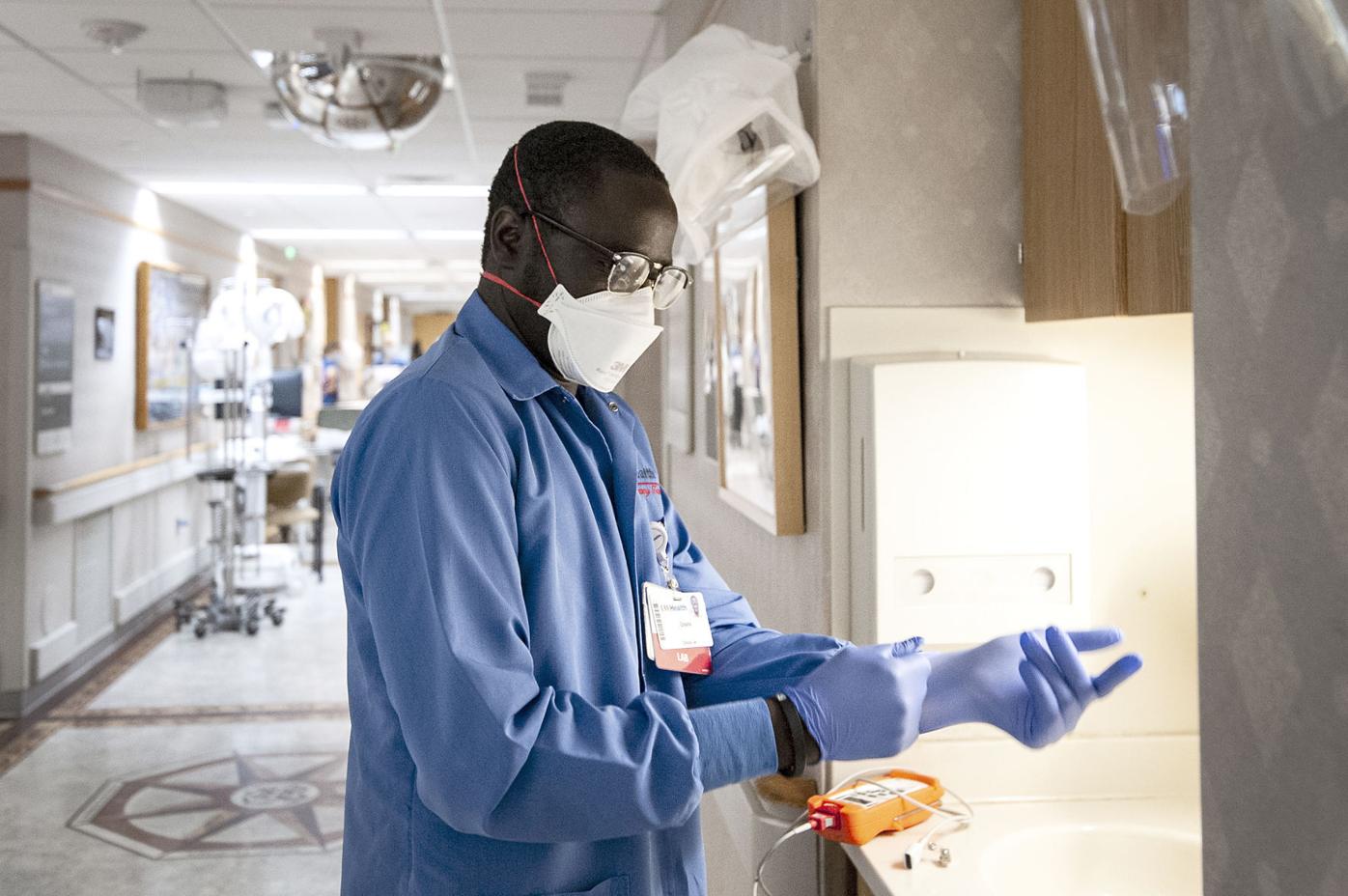 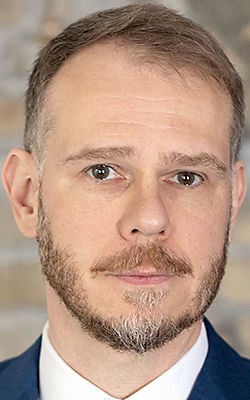 Above and below: Protesters are seen at a rally at the state Capitol in Madison on April 24. They were demanding an end to the wide-ranging shutdown of normal life and business aimed at curbing the coronavirus pandemic. Weeks later, Gov. Tony Evers’ safer-at-home order was overturned by the Wisconsin Supreme Court. Even as the state’s pandemic death toll surges, some residents believe the threat of COVID-19 is overblown and that masks are dangerous.

A protester holds a sign at a rally at the state Capitol in Madison on April 24. The crowds gathered to demand an end to the shutdown of normal life and business aimed at curbing the coronavirus pandemic.

Dan trusts practically nothing the media and medical establishments say about the COVID-19 pandemic.

He considers the threat overblown. And saying as much on Twitter has triggered heated arguments.

“You question anything, you get told you’re going to kill Grandma or you’re doing something wrong, and you’re made to feel like you’re unpatriotic for not putting on a mask,” he told Wisconsin Watch.

Dan of Muskego is an active voter who has worked for the past several years at a restaurant. He requested that Wisconsin Watch omit his last name for fear of online harassment. He counts himself as one of the few people watching the “real world,” unlike those who “live in ignorance.”

Believing that “both sides of the aisle are completely corrupt,” Dan characterizes COVID-19 stay-at-home measures as a deliberate attempt by Democratic politicians to “tank” the U.S. economy.

“I feel like they’re trying to literally destroy businesses,” he said. “And that fits into what I believe is the greater agenda: … Trying to get people dependent on government income.”

He’s not alone in seeing stay-at-home orders and business restrictions as a coordinated assault on commerce rather than a last-resort measure to slow the spread of a highly infectious disease that has claimed more than a quarter of a million lives in the United States, including more than 3,700 in Wisconsin.

In spring, an estimated 1,500 protesters gathered at the state Capitol demanding that the statewide COVID-19 lockdown be lifted. Others blame the wearing of masks—a key public health strategy—for causing rather than preventing infection.

Over the summer, members of the Appleton City Council were forced to bat down unfounded rumors that contact tracers were surveilling residents. And in an extreme example, staffers at the Milwaukee Health Department recently received death threats for enforcing COVID-19 orders, according to the Milwaukee Journal Sentinel.

“I don’t think any of us thought, when the pandemic started, that one of the biggest barriers we’d have to overcome would be misinformation from people who have no idea what they’re talking about,” he said.

Skeptics interviewed by Wisconsin Watch include people who embrace the increasingly popular QAnon conspiracy theory, are generally suspicious of vaccinations, consume nontraditional medical advice and value personal freedom above what they believe are exaggerated public health considerations. They also acknowledge that their beliefs have put them at odds with co-workers and with family.

“It’s partly human nature,” Scheufele said, adding that such theories have been fueled by government officials, including President Donald Trump.

Scientists have been tasked with striking down misinformation on COVID-19 while their own understanding of the new coronavirus evolves in real time—leading to confusion, skepticism and even denial around the respiratory disease.

“We knew that we would produce a lot of science that would turn out to be wrong,” Scheufele said. “You make a mistake in the spotlight with 330 million Americans watching, that mistake—maybe a small one—will be seen by everybody.”

The roots of denialism

That so many people believe the pandemic isn’t real, or at least isn’t a big deal, is partly the work of mind mechanisms known as biased assimilation and motivated reasoning.

“It doesn’t really matter what you tell me because I’m just going to fit it into my existing belief system, and I’m really not going to change what I think,” Scheufele said, describing the phenomena. “Of course, during a time like a pandemic—where we do need to change behaviors, we do need to change our interactions with one another and our daily routines—that’s just utterly dysfunctional.”

This denialism plays into a looming issue—vaccination—which could prove critical as the world moves into a sensitive new phase of the pandemic. While nations race to develop multiple coronavirus vaccines for distribution, many U.S. residents say they will not take them.

Having worked in education for 28 years, “Susan” said she would walk away from her job at a school district in northern Wisconsin if she is required to be vaccinated against the novel coronavirus. Susan asked Wisconsin Watch to use a pseudonym because she fears coming out against vaccination could jeopardize her career.

“A lot of people in our school district and in the health care field up here feel the same exact way; they do not want it,” she said. “It was done way too fast.”

Roughly three in five U.S. adults said they “would definitely or probably” get a COVID-19 vaccine in a national survey conducted by Pew Research Center in November—up from about half of respondents in September. But that means two in five do not plan to get vaccinated.

Susan believes the pandemic is real but overhyped. She tested positive for COVID-19 on Sept. 29, after falling ill with similar symptoms in January (she believes she caught the coronavirus twice). After missing nearly a month of work between the two bouts of illness, she is still short of breath and has difficulty walking down the hallway at work.

Susan blames the mask she is required to wear on the job for her labored breathing and generally disapproves of Gov. Tony Evers’ mask mandate. She doesn’t think masks help slow the spread of COVID-19, insisting that they instead represent a health hazard.

“I think that since the mask mandate went into effect, it got worse in northern Wisconsin,” she said.

What happened in northern Wisconsin was not unique, however. The Upper Midwest, which was spared the surge that hit New York in April and early May, began seeing an increase in COVID-19 infections this summer that has continued into the winter in states with a variety of mandates around masking.

And no evidence supports the claim that wearing a mask is harmful to your health. But early in the pandemic, the Centers for Disease Control and Prevention discouraged mask-wearing by the general public unless people were having COVID-19 symptoms.

The CDC reversed course April 3, which caused some to question the agency’s advice. Subsequent studies have verified that masks protect wearers and others from the spray of respiratory droplets of virus when worn over the nose and mouth. The CDC recently recommended “universal mask wearing” for all indoor activity outside a person’s home and for outdoor activities where 6 feet of social distancing cannot be maintained.

Although she’s fiercely opposed to wearing masks and taking a COVID-19 vaccine, Susan favors another statewide stay-at-home order to combat the virus that has taken her breath away. And she trusts public health officials such as Dr. Anthony Fauci—sometimes.

“Do I believe Dr. Fauci? Damn right I believe him. He’s damn good at what he does, and I am a firm believer in him,” she said, pausing. “Except for the mask part of it. I don’t believe that.”

‘I do not need to be afraid’

Julie Drigot believes that “wearing a mask is absolutely insane.”

A career teacher, Drigot recently moved to the hamlet of Little Prairie to fulfill her dream of running a small farm school; a handful of children visit her a couple of times a week for instruction.

Drigot said she was “paralyzed with fear” during the early days of the pandemic. As someone with a pre-existing medical condition, she was afraid that “this was going to kill me.”

She went looking for information sources that were more reassuring. Drigot consults a number of websites known to produce pseudoscientific content, such as The HighWire with Del Bigtree, a major voice in the national anti-vaccination movement.

The website has promoted anti-mask sentiment and the debunked “Great Reset” conspiracy theory, which claims world leaders orchestrated the pandemic to destroy capitalism and take control of the global economy.

In July, Bigtree’s YouTube account was deactivated for pushing misinformation about vaccines and COVID-19, including his suggestion that people should intentionally expose themselves to the virus.

Drigot takes issue with the “censorship” of voices such as Bigtree’s. All viewpoints should be shared freely, she said.

“I can make up my own mind, thank you very much, right? That’s my attitude,” Drigot said.

‘Looking for the truth’

Describing himself as politically “middle of the road,” Dan admits to having a history of conspiratorial thinking. But he takes issue with the term “conspiracy theory,” which he says has been used to discredit truth-seekers.

“Looking for the truth, you kind of guide yourself there, and eventually you come to your own understanding of what’s going on,” he said.

In mild-mannered tones, Dan described his belief in QAnon—the baseless far-right theory that Trump is helping to expose a cabal of Satan-worshiping, child- cannibalizing celebrities, journalists and politicians. Dan said he began following QAnon since it emerged on the anonymous message board 4Chan in October 2017.

“As much as the media attacks it,” he said, “it makes it more legit to me.”

He’s wary of how quickly the vaccines were developed and wonders whether the “end game” is forced vaccinations. All evidence is refutable, he said. “There’s no real information.”

Arguing has caused difficulty in Dan’s personal life. He used to talk freely about politics with his mother, but that changed during Trump’s presidency, he said.

“We’re being pitted against each other, and it doesn’t feel very good,” Dan said. “It’s terrible. It’s not fun to be living in this.”

Howard Hardee is a Madison-based journalist who created a misinformation toolkit for consumers funded by the Craig Newmark Philanthropies. He is a fellow at First Draft, an organization that trains journalists to detect and report on disinformation. Wisconsin Watch (wisconsinwatch.org) collaborates with Wisconsin Public Radio, PBS Wisconsin, other news media and the UW-Madison School of Journalism and Mass Communication. All works created, published, posted or disseminated by Wisconsin Watch do not necessarily reflect the views or opinions of UW-Madison or any of its affiliates.