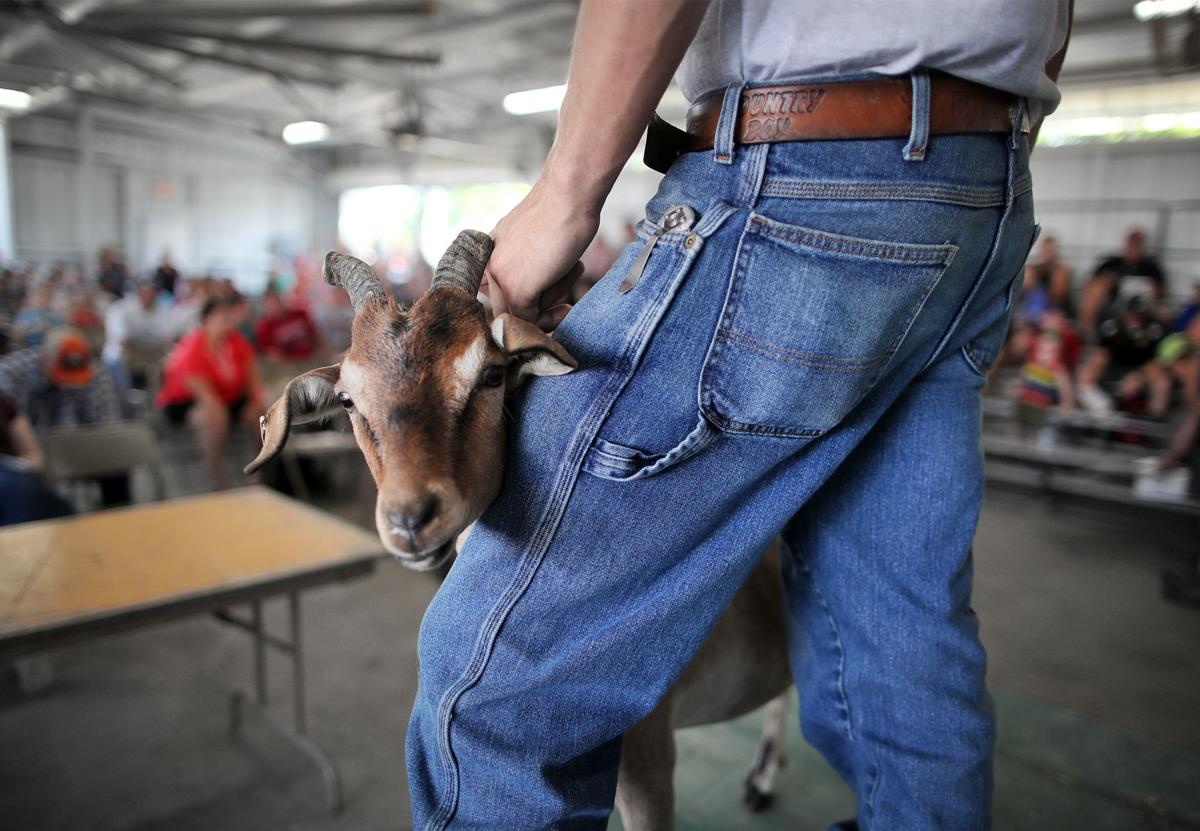 Tanner Beggs holds his market goat for those in the sale arena to see as during the Rock County 4-H Fair Fur & Feather sale Saturday. 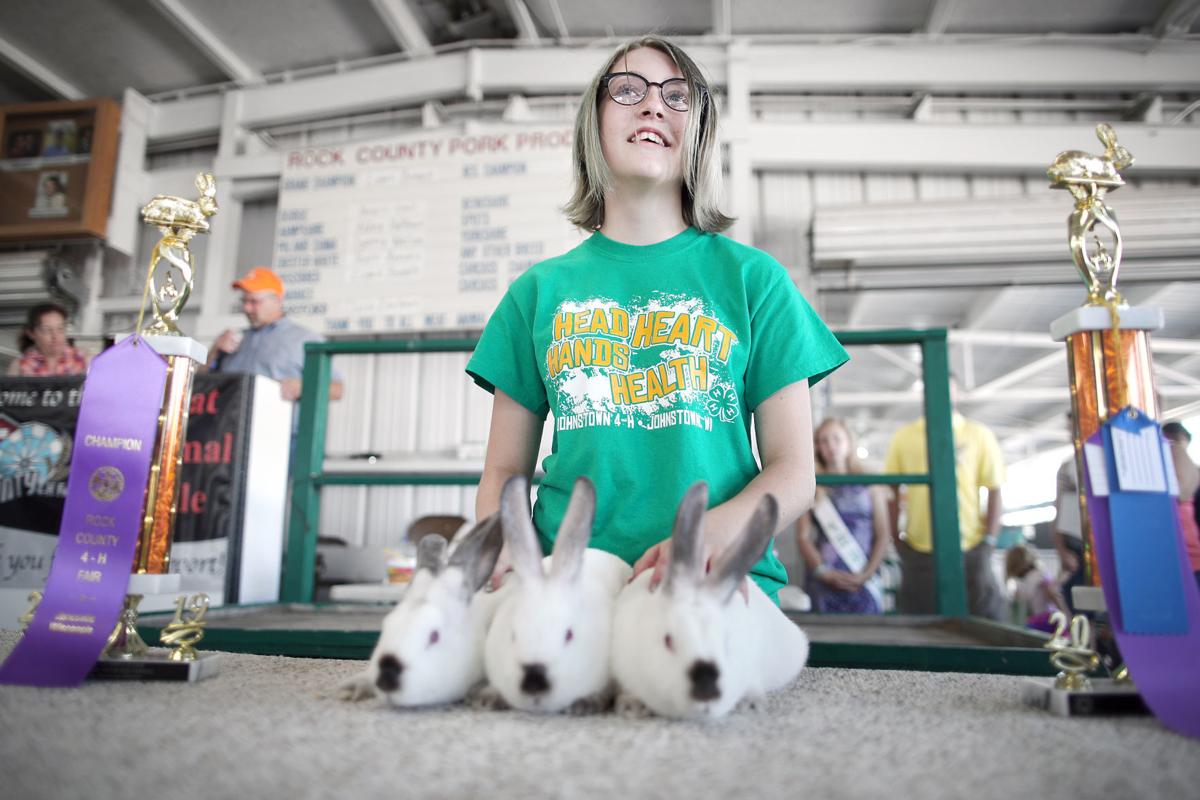 Lily Weber, of Johnstown 4-H, shows her champion fryer pen to the sale arena as they are auctioned at the Rock County 4-H Fair Fur & Feather sale Saturday. 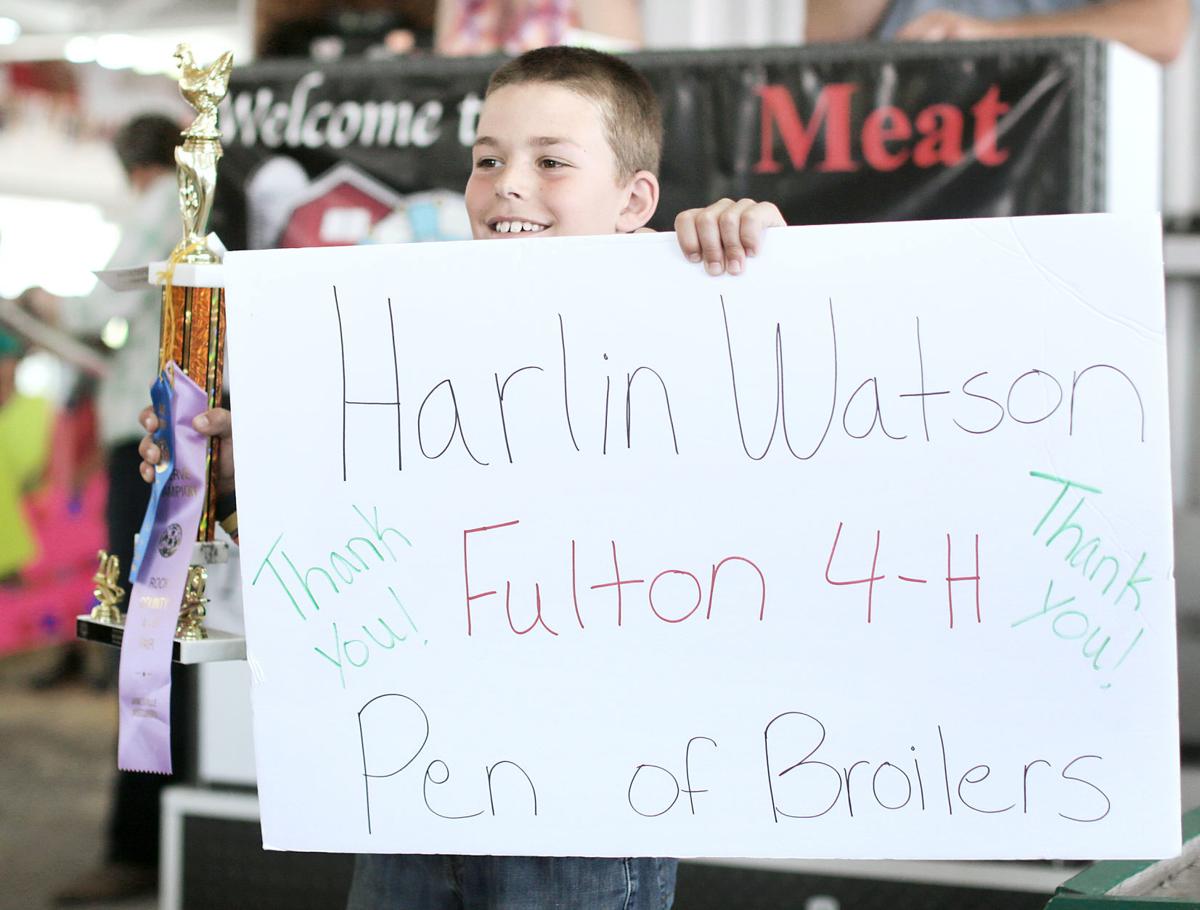 Harlin Watson, of Fulton 4-H, holds a sign to encourage buyers for his pen of broilers during the Rock County 4-H Fair Fur & Feather sale Saturday. 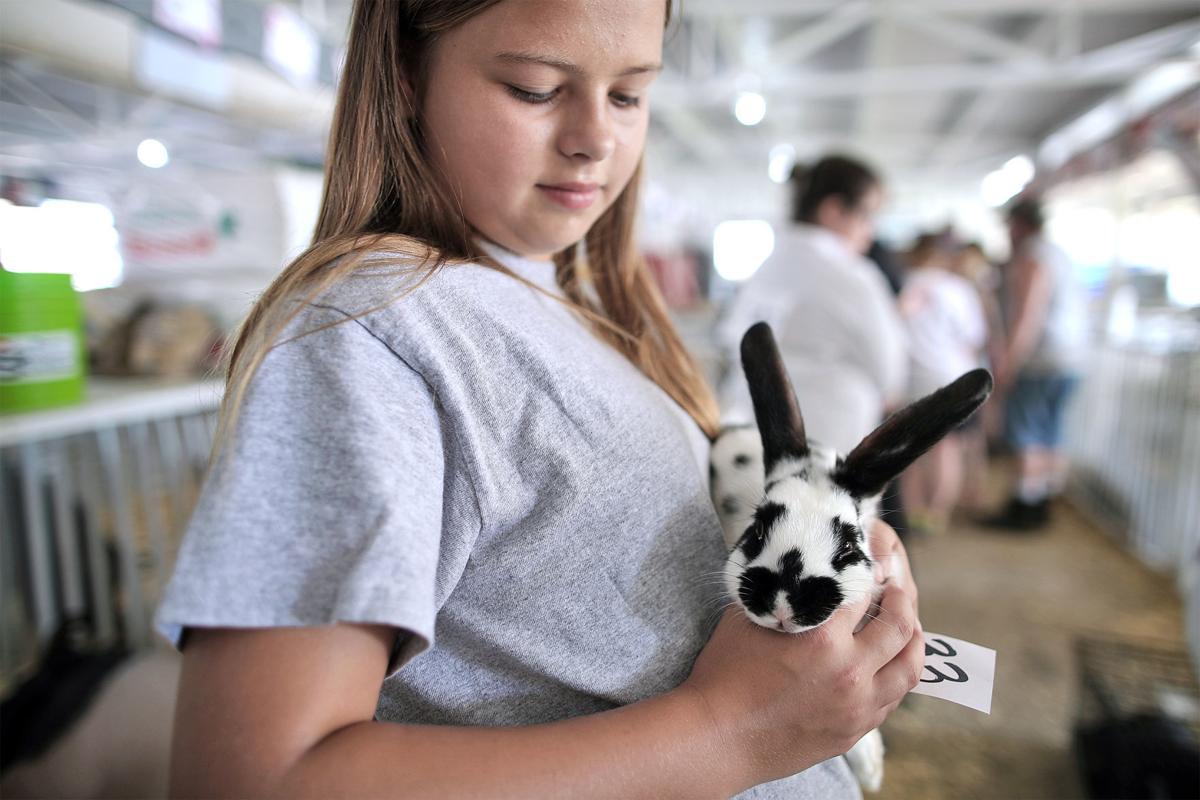 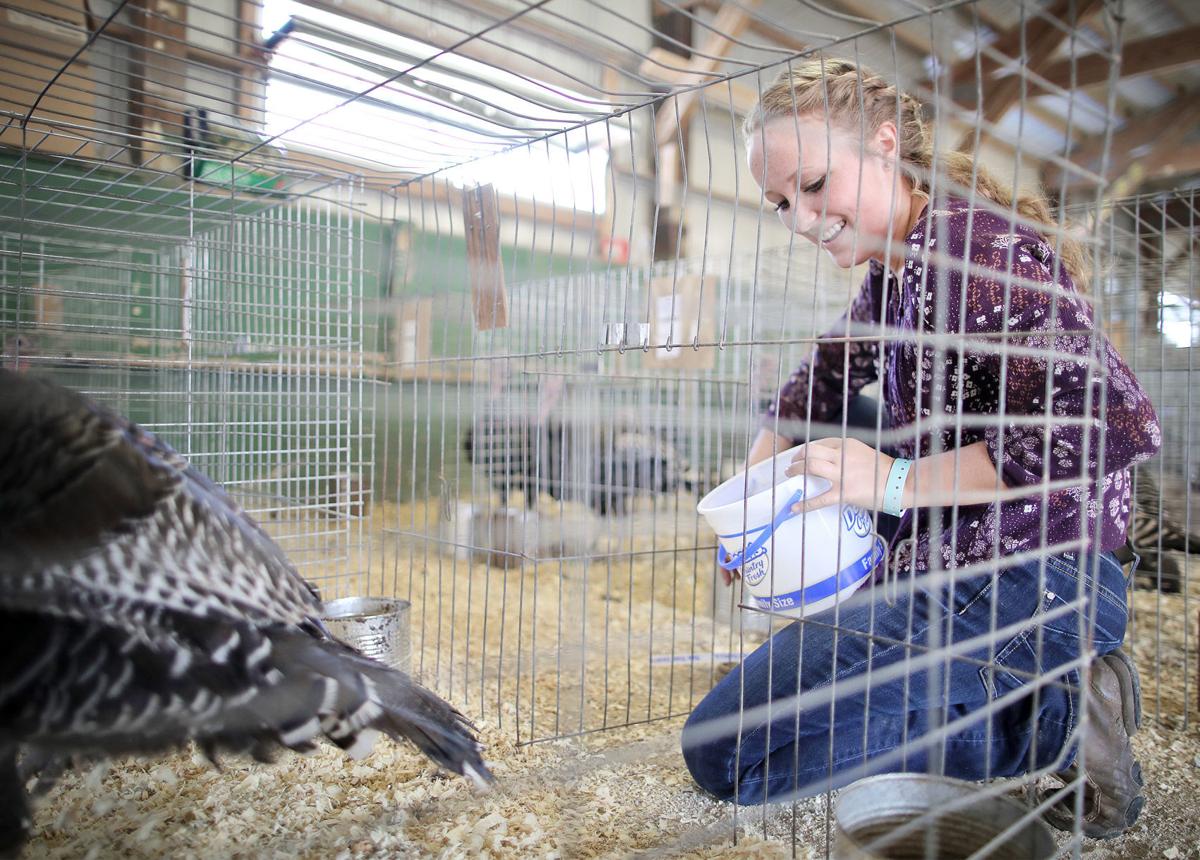 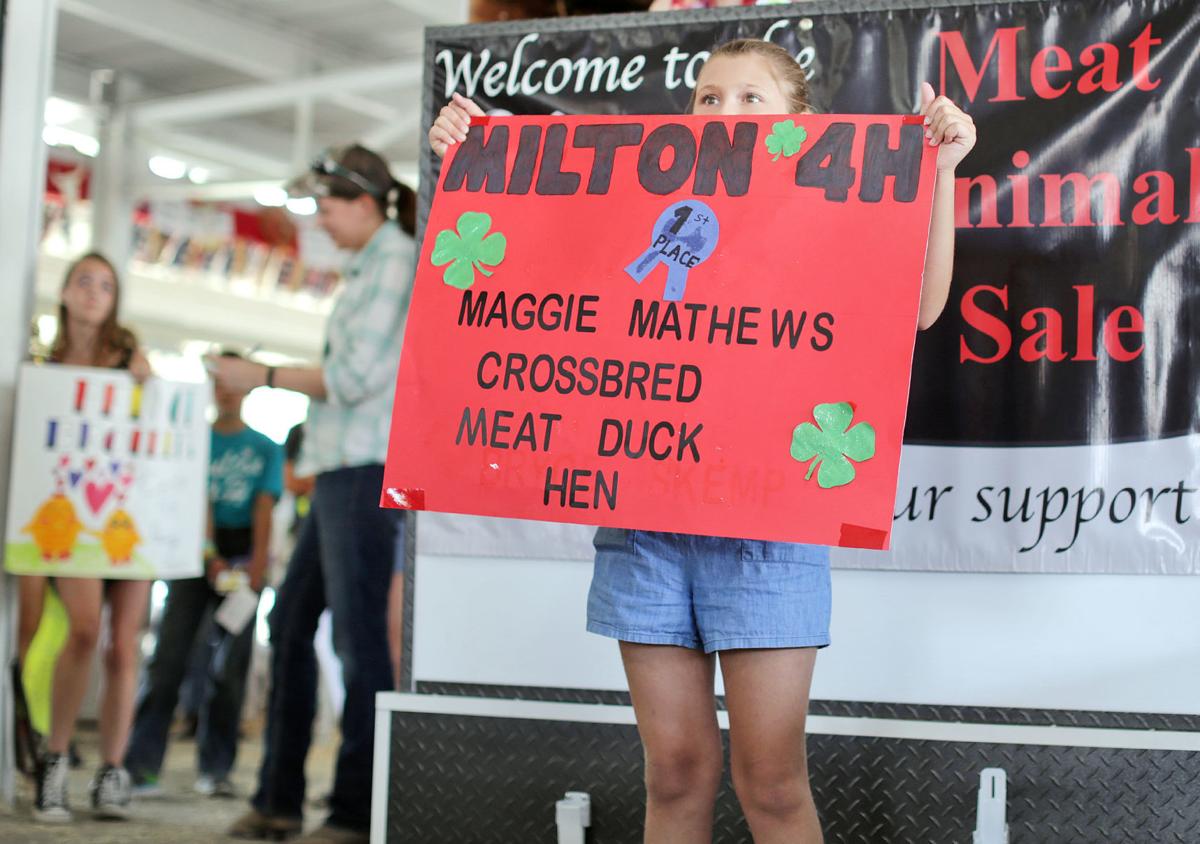 Maggie Mathews holds her sign advertising her meat duck as it is auctioned at the Rock County 4-H Fair Fur & Feather sale Saturday.

An auctioneer at the Rock County 4-H Fair Fur & Feather sale baited a bidder by encouraging the man to not let a lady outbid him.

In the words of fair board President Randy Thompson: “It’s all for the kids.”

Lily Weber, 12, of Johnstown 4-H, was the first person to sell. She walked up to one of two carpeted tables in front of the arena and pulled from a cage three identical white Californian rabbits with brown noses.

She placed the rabbits in a tight row on the table. About a minute later, the overall fryer champion rabbits sold for $150 a pop.

Weber has raised and sold rabbits for about four years. She likes raising animals she can hold in her arms, she said.

Rabbits are skittish animals. Grady Reed, 11, said raising rabbits is easy. The challenging part is keeping them still on the table during the sale.

The trick is to put your hand over their eyes so they don’t know what is going on, Reed said.

Rabbits and goats were shown to the crowd of bidders. On the feather side, those selling chickens and turkeys flashed posters to the crowd in lieu of bringing out the animals.

Beth Tallon, the sale’s announcer, told a Gazette reporter to stick around for the poultry sale because chickens sometimes sell for $400 or more.

The first two broilers went for $400 each, perhaps a testament to Tallon’s experience in animal sale supervision.

Madix Fisher from Fulton 4-H wrote he had “the 2 coolest broilers” on his poster board.

Piggly Wiggly of Milton and Edgerton bought the fair’s coolest chickens for $250.

Kaiden Filter of Milton 4-H got right to the point with a poster that said his chicken “tastes good.”

Chase Anderson, 17, of Magnolia 4-H, was in line in the swine building waiting to sell his turkey Saturday when a reporter asked him what makes a good turkey.

A friend in the distance helped him answer by saying “it tastes good at Thanksgiving.”

For full fair coverage, including a daily schedule, go to Gazettextra.com/fair.

Here are some numbers from the 2019 fur and feather sale at the Rock County 4-H Fair:

The Rock County 4-H Fair starts Tuesday, July 23. Here is a schedule of highlights, as posted on rockcounty4hfair.com. View schedule