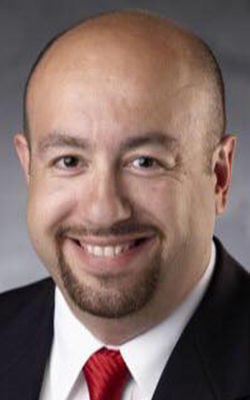 In an unusual move, the Republican Party of Rock County is urging its members to vote for a Democrat.

No one else is on the fall ballot, so the winner Aug. 11 would become the clerk.

State law allows anyone to vote in any party’s primary, but only in one party’s primary. Local Republicans have no contested races in their own partythis time.

“All of us are better off when we have good, solid people who are overseeing our elections,” Mielke said.

Mielke would not say why he opposes Rashkin’s candidacy.

“I don’t want to put out anything negative about a candidate,” he said. “This is purely just to recognize the job she (Tollefson) has done in the past and to encourage her to do the same thing in the future.”

Mielke pointed to a letter he received from county Board of Canvassers members Larry Holterman, a Republican, and Dave Vaughn, a Democrat, endorsing Tollefson and praising her skills and dedication.

Holterman, who also serves on the county Republican Party board, urged Mielke to share the letter, Mielke said. He included it with the email he sent to his fellow Republicans.

Tollefson said the thumbs- up from the Republicans surprised her.

“It’s nice to know they respect that I run fair elections,” Tollefson said.

“I really believe this office should be nonpartisan and should be neutral, and my job is to protect the elections for everybody in the county,” she said.

The development comes three weeks after a Facebook post from Tollefson’s husband, Tim, who urged conservatives to vote for his wife.

In the post, Tim Tollefson described Rashkin as a “little agenda-driven socialist.”

Lisa Tollefson apologized for the post, saying she was upset about it and did not know her husband was going to do it. She had him delete the post.

Lisa Tollefson and Rashkin were scheduled to speak in an online forum organized by the Democratic Party of Rock County on July 12, but it was delayed to July 19 after Tollefson said she had developed laryngitis from yelling at a Fourth of July parade. It was then canceled because of Tollefson’s continued illness.

Tollefson said there was another reason she could or would not attend the forum, but she declined to discuss it.

Tollefson said Monday she has to preserve her voice for upcoming training sessions for poll workers.

Rashkin said Monday “it would be nice” if Tollefson would say the Republicans don’t speak for her.

“I oppose these overtures and support Democratic values,” Rashkin said.

Rashkin said he wanted to focus on his positive message, but he repeated a common complaint of Democrats: that Republicans are known for voter-suppression efforts.

Mielke said those words are not a surprise coming from Rashkin, who often publishes his views on Facebook.

“Yuri believes in what he is doing, and obviously on the Republican side we subscribe to a different set of philosophies, and we believe in what we are doing,” Mielke said.