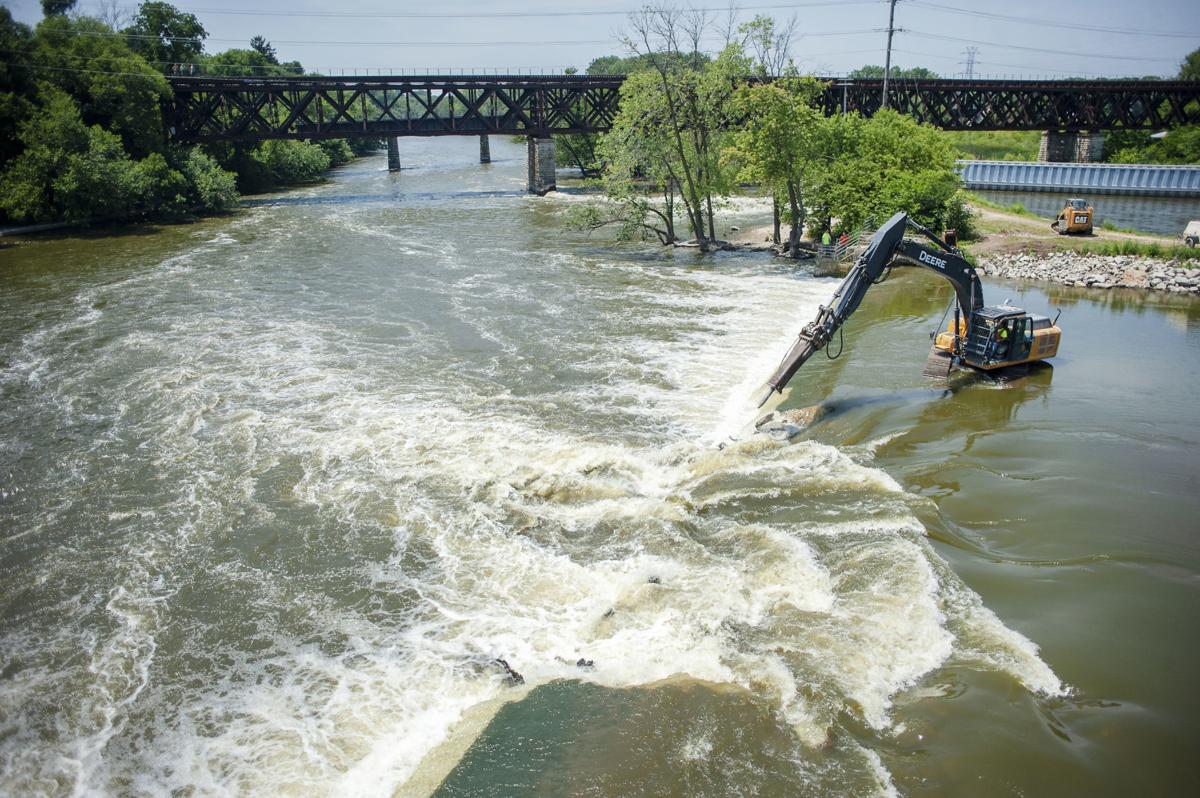 Water flows through holes created in the Monterey Dam spillways Friday in Janesville. 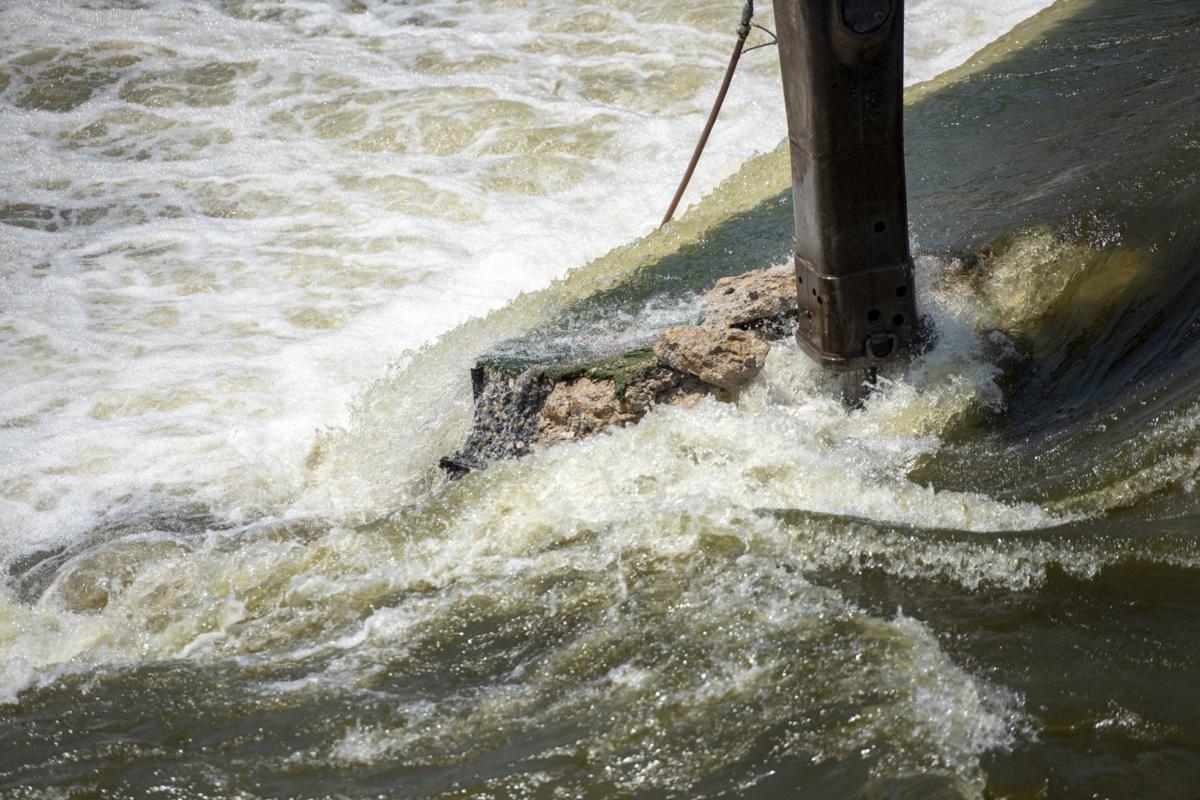 Water rushes past a jackhammer attached to a backhoe as demolition starts on the Monterey Dam on Friday in Janesville. 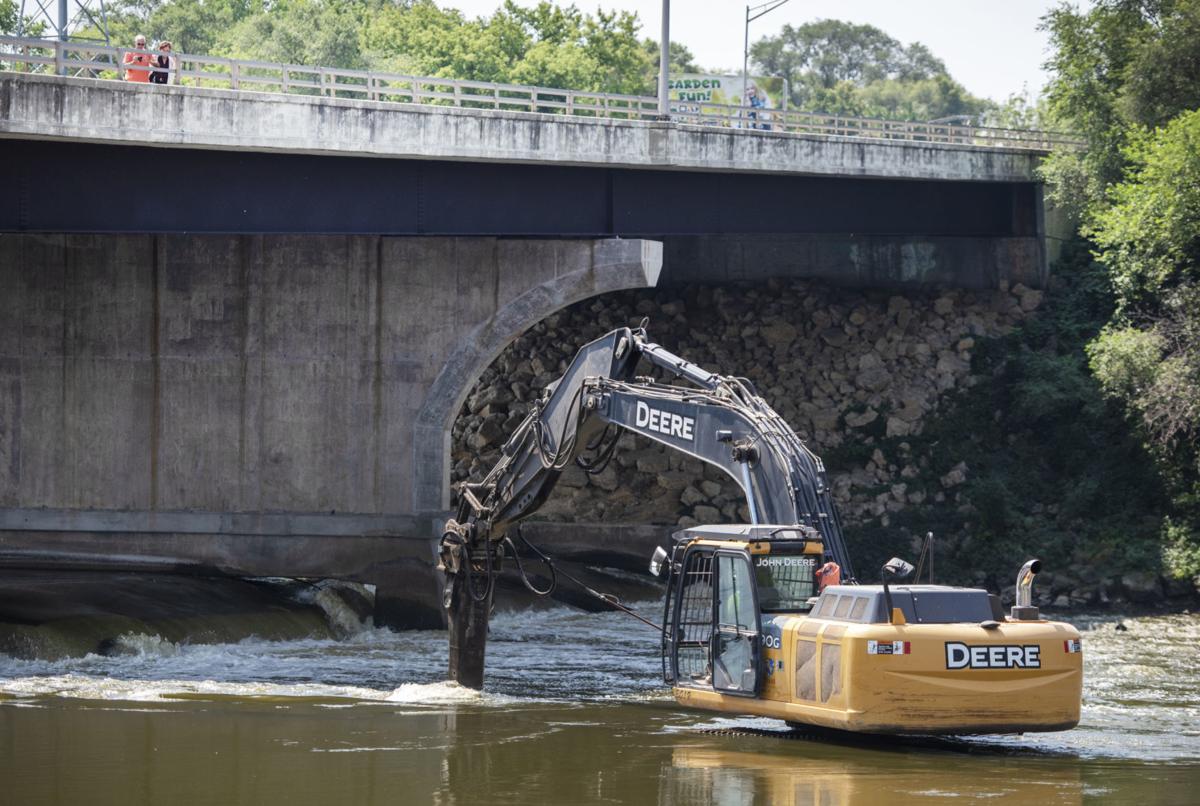 A pair of onlookers watch as an excavator begins to remove one of the Monterey Dam spillways Friday in Janesville.

Water flows through holes created in the Monterey Dam spillways Friday in Janesville.

Water rushes past a jackhammer attached to a backhoe as demolition starts on the Monterey Dam on Friday in Janesville.

A pair of onlookers watch as an excavator begins to remove one of the Monterey Dam spillways Friday in Janesville.

Barring a court order stopping demolition of the Monterey Dam, the lagoon behind the dam could turn into a mud flat within a week.

The long-awaited and controversial project to remove the Monterey Dam started Friday morning.

City Public Works Director Paul Woodard said crews were breaking up the concrete dam and temporarily leaving some of its pieces in the water. Those pieces will gradually be removed to prevent the water level from dropping too quickly, he said.

The city plans to lower the water level by 4 feet, but state permits dictate it can only do 6 inches per day. Within about eight days, the small lagoon on the river’s northern bank could be gone.

An excavator equipped with a jackhammer drove into the water and began battering the dam late Friday morning.

Onlookers watched as water began to rush through gaps where the machinery chipped away at the spillway that has restrained the river for years below the Center Avenue bridge.

The lagoon’s southeast corner became visibly shallower. The mud bottom was exposed in some places as the day proceeded.

Nick Dietz, who lives near the dam and often fishes at the lagoon with his son, said he was surprised how much the area changed in one day.

“We were here yesterday fishing, and none of this was here,” he said. “There was no mud out here. There was regular water.”

One resident watching the start of the dam’s removal questioned whether the wrecking crew had permits to tear out the dam.

City Engineer Tim Whittaker, who is managing the project, told The Gazette “all required permits” are in place for the project.

Earlier this week, Whittaker wrote in an email to The Gazette that the city needed to obtain four permits from the state Department of Natural Resources. Those permits cover dam removal, wetland work, a stormwater pond and the shoreline.

Janesville also needed a permit from the U.S. Army Corps of Engineers. That permit addressed the entire project rather than different segments, he wrote in the email.

After months of study, the Janesville City Council voted in March 2017 to remove the dam. Those who voted in favor of removing the dam said at the time they were concerned about the ongoing costs of maintaining it.

Whittaker said people will notice a “modest change” in water elevation near the dam after the start of work Friday. The permit allows dam removal crews to drop water by 6 inches each day during work.

A Gazette reporter Friday afternoon observed a water line on a support column under the Center Avenue bridge. The line appeared to be about 6 inches above the river’s surface.

Whittaker told The Gazette photographer the dam’s removal would likely take until December.

The city in March reported the low bid for the dam removal project came from Drax in Madison for $1.54 million. That was just over $400,000 more than an earlier consultant’s estimate.

Before noon, about 10 people, most of whom said they were with the Monterey Dam Association, showed up to the scene expressing their anger.

Resident Bill McCoy called for the hanging of city council members and the city manager because, he said, what was happening Friday was illegal.

“It’s time for us to clean out City Hall. Get rid of all the crap that’s in City Hall and forget about this ARISE program,” McCoy said.

ARISE is a downtown Janesville redevelopment initiative centered on the Rock River.

K. Andreah Briarmoon accused the city of ignoring legal requirements for a process she said could cost taxpayers money “for decades.” She was worried about the mud, mosquitoes, stench and invasive species that could take over the area.

Briarmoon, an association member, said she received a text message at 9:30 a.m. and went to the dam and watched from the Center Avenue bridge.

“City employees need to read the Constitution,” she continued. “The Constitution doesn’t give us rights. It is us telling them what they get to do, and they don’t get to destroy our stuff.”

David Lyon, an association member who has lived on the river for eight years, could hear the machinery from his home Friday morning. He didn’t think it sounded like it was coming from the old General Motors plant, which is being demolished, so he walked down.

“I never would have bought the house if I knew what they were gonna do here,” Lyon said. “At night, before I went to bed I’d brush my teeth and look out (the window). Now, for the last year, I haven’t even been looking out there because I know it’s going to be gone.”

President of the dam association, Jim Chesmore, said “this is all in the lawyers’ hands now,” adding the city “jumped the gun.”

Chesmore said he lives on the river and questioned if he would be reimbursed for the decline in property value he’s expecting to follow the dam’s removal.

He said the association turned in 1,200 signatures to save the dam, but the city “completely ignored it.”

Richard A. Reinke, also with the association, said contaminants were being released into the river, where he said he has 55 acres of property.

“It’s really pissing me off,” he said.

Shawn McCarten, owner It’s a Keeper Bait and Tackle near the dam, estimated 100 people were at the shoreline watching the work Friday.

He didn’t know how many of those people wanted the dam to stay or go. McCarten, a supporter of dam removal, said a handful of people criticized him Friday for his stance.

“I’m about the future of fishing. If it creates more fishing atmosphere for the youth and kayaking, canoeing possibilities, it’s going to be good for everybody in the long run,” he said. “My main concern is it’s done swiftly and correctly. That’s all I care about.”

The Monterey Dam Association, a group that opposes the dam’s removal, for months has been seeking to halt the city’s plans to tear out the dam.

The group on Thursday filed a lawsuit in Rock County Court seeking an injunction to block the city from removing the dam. The request asks a judge to halt “any and all action relating to the removal of the Monterey Dam,” according to a filing obtained by The Gazette on Friday.

The association asks that the dam’s removal be blocked until a January hearing the Monterey Dam Association has requested with the state Department of Natural Resources.

The group is contesting the DNR’s issuance of permits for the removal of the dam because it questions whether the city has properly considered effects of the dam’s removal.

It also questions whether the city has adequately identified the scope of potential contamination upstream of the dam or to what extent the dam’s removal could release contaminated sediment, according to the court filing.

“We are surprised and disappointed that the city has chosen to proceed while a contested case hearing is pending with the DNR,” Hahn said. “We’re shocked they could risk proceeding when the validity of their permit is in question.”

Hahn said the Monterey Dam Association filed a motion in court on Friday for an “expedited hearing” on its motion to halt the dam’s removal.

On Friday, it did not appear a Rock County Court hearing had been scheduled. Hahn said his clients hoped a hearing might be held Monday or Tuesday.

The city had 20 days from Thursday to respond to the summons.

Hahn said the Monterey Dam Association hopes the city stops demolition, pending a hearing in front of the DNR.

Woodard said the city on Friday received a copy of the dam association’s request for an injunction after crews had begun work to remove the dam. The request has no authority without a court order.

The long-awaited and controversial project to remove the Monterey Dam started Friday, July 13.

The Monterey Dam debate, design and planning have been a part of the pages of the Gazette and on the airwaves of WCLO since the original citizen committee was put together over two years ago.