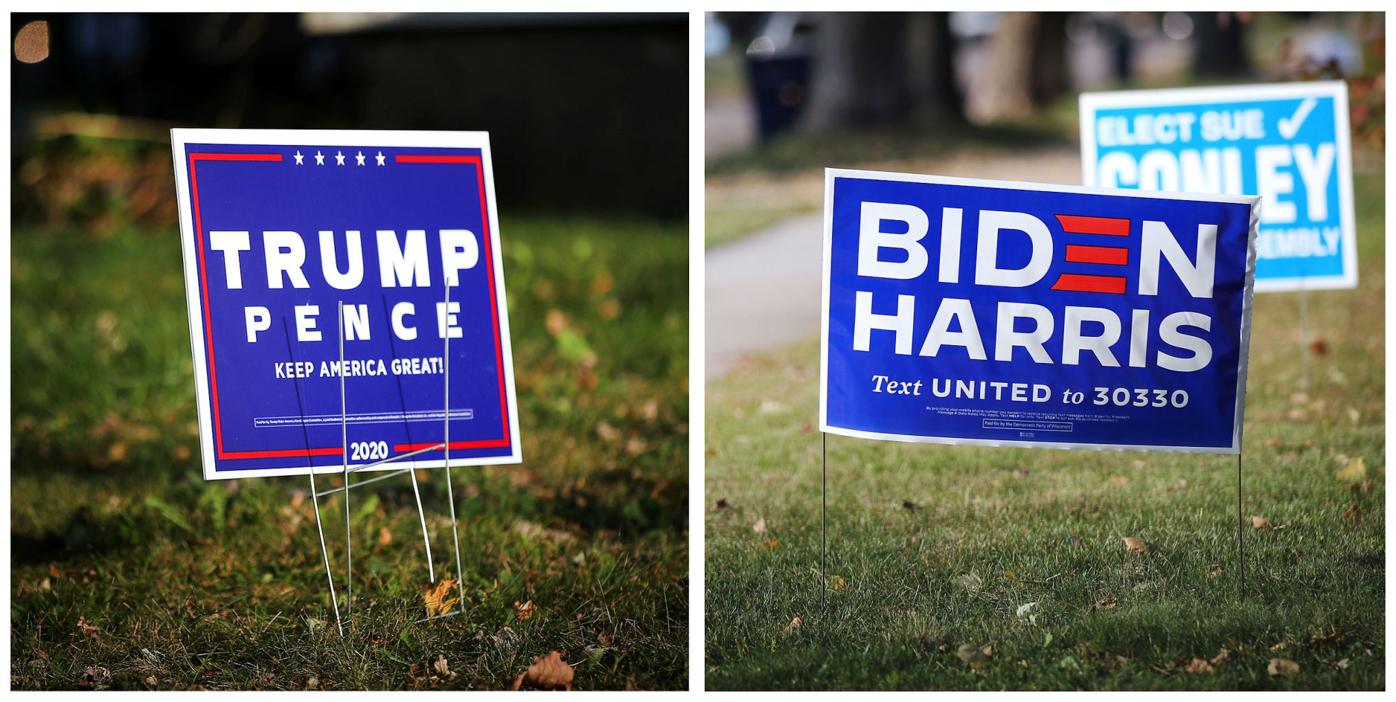 Yard signs supporting both presidential candidates, as well as others seeking public office, can be found on lawns throughout Janesville. 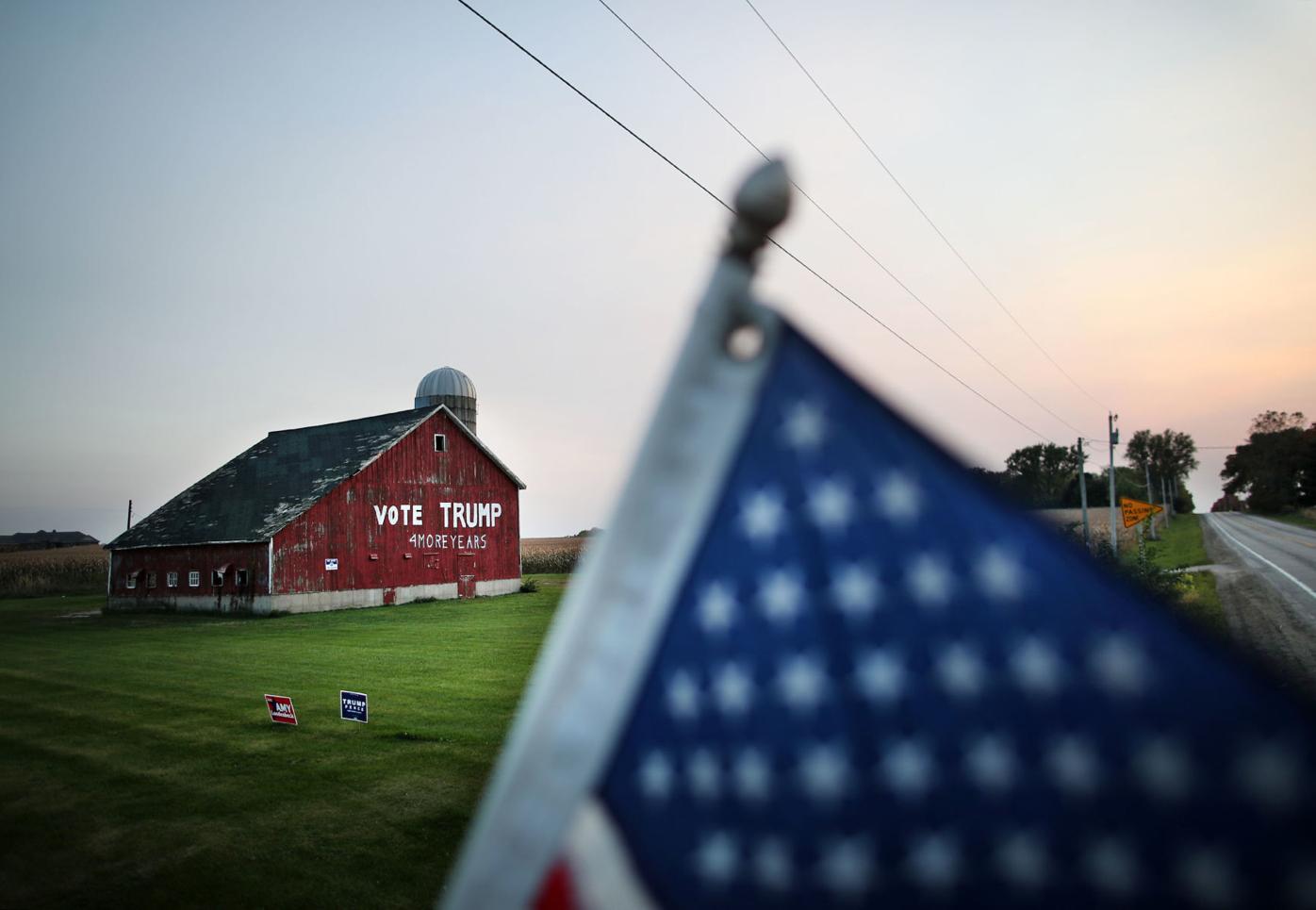 Signs demonstrating support for presidential candidates vary in size and sometimes are homemade, such as the one on this barn on County X between Beloit and Clinton. 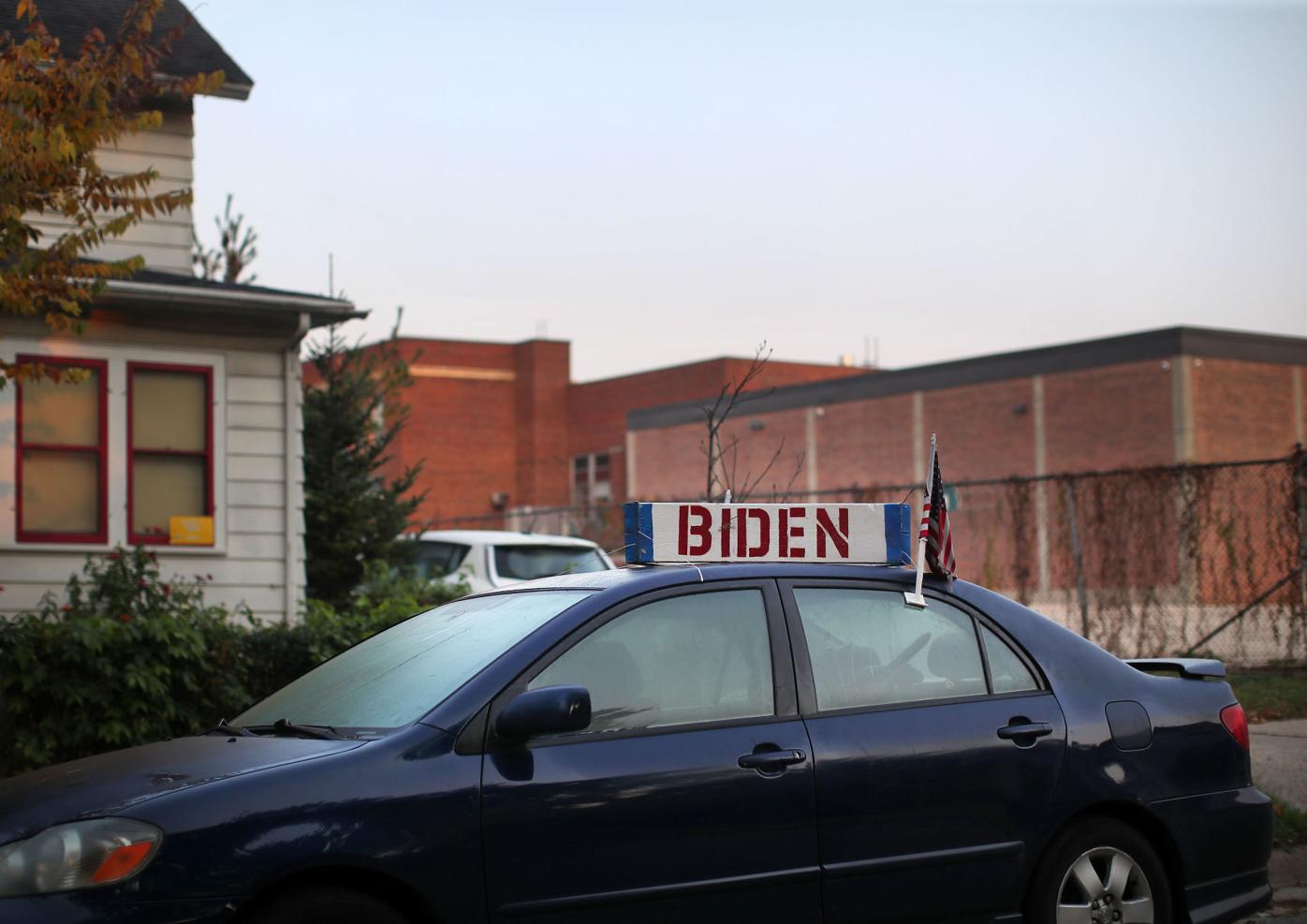 This homemade campaign sign was attached to the top of a car parked in Janesville’s Fourth Ward neighborhood.

Yard signs supporting both presidential candidates, as well as others seeking public office, can be found on lawns throughout Janesville.

Signs demonstrating support for presidential candidates vary in size and sometimes are homemade, such as the one on this barn on County X between Beloit and Clinton.

This homemade campaign sign was attached to the top of a car parked in Janesville’s Fourth Ward neighborhood.

One man leaned out the window of a car pasted with Trump stickers yelling “Keep America Great!” through a megaphone. Another car sporting a painting of the president and the words “Trump Train” blared sirens as it drove past onlookers in the Hobby Lobby parking lot.

In a nearby car, two women began to blast “FDT,” a 2016 rap song about hating Trump. They turned up the volume as the parade of cars approached.

“We knew this was coming here. We were ready for it,” said one woman, who asked not to be identified because she feared retaliation at work.

“I’m just ready for it (the election) to be over,” she said.

The scene in those Janesville parking lots likely is a common one across the nation.

As the Nov. 3 election approaches, political tensions are high. Supporters of Trump and Democratic presidential candidate Joe Biden are in their own corners making a final push for their candidates.

Jay Saporiti of Beloit drove his truck, fitted with large American and Trump 2020 flags, in Saturday’s parade. He said about 100 cars were in the parade at one point.

“We want to bring awareness that the silent majority isn’t so silent. We’re out there,” Saporiti said as demonstrators honked horns behind him.

He said this year’s election is especially polarizing because he believes Democrats run the mainstream media.

“One side completely controls the mainstream media, and the other side is people who do their own research, honestly,” he said.

When asked if he ever gets nervous about driving his truck around with Trump flags during an election year, Saporiti pointed to the holstered pistol on his hip, saying, “No, I’m prepared.”

Other people prefer to express their views more placidly through yard signs.

Pam Rogers has lived in Janesville since 1996. She has planted signs endorsing presidential candidates before, but this year she thought it was especially important to have a Biden sign on her lawn.

“I just thought it was important to have both sides represented,” she said. “You see a lot of Trump signs, which are fine, because that’s who people support, but I hadn’t seen a whole lot of Biden/Harris. So I thought this would be a good year to put one up.”

Rogers said she hasn’t heard any reaction from neighbors or family and friends over the signs. She said they know she respects people’s right to their opinions.

“I’m glad to see my sign is still there,” she said.

In Michigan, some Trump 2020 signs were booby-trapped with razor blades on the bottom to deter theft.

On Lombard Avenue in Janesville, Jennifer and Mike McKay have two Trump/Pence signs in their yard, and the man across the street has a sign supporting Biden.

Jennifer McKay said the family decided to put signs in their yard in 2016 and this year “because I believe our liberties are at stake.”

McKay said she had minor concerns about endorsing a candidate and what others around her might think, but at the end of the day, respect is the most important part of the equation, she said.

“We’re not causing any trouble, so I would hope it would work both ways,” she said.

The family is close with the neighbor who displays the Biden signs, McKay said. No one was home when a Gazette reporter knocked on the neighbor’s door.

“No, we haven’t (talked about it). We are friends with the neighbor. We help him out because he’s elderly, but we have not had any discussions about political stances,” McKay said.

About a half-mile away, two adjacent houses have signs with opposite political viewpoints.

One of them features signs for Democrats Sue Conley and Joe Biden. The homeowner, who asked not to be identified because of possible repercussions at work, said the Republican neighbors haven’t objected to the signs.

“We’re big enough people that we can maintain a healthy relationship with friends with differing opinions,” he said, cracking a smile.

“But I certainly am not opposed to putting out more signs to compete with the other ones across the street that way. So we’re not afraid to stir it up a bit.”

UPDATE: Donald Trump set to come to Janesville on Saturday

President Donald Trump appears set to return to Janesville on Saturday, just two weeks after he was supposed to visit the city but didn’t because he was in the hospital, according to a fundraiser invite.