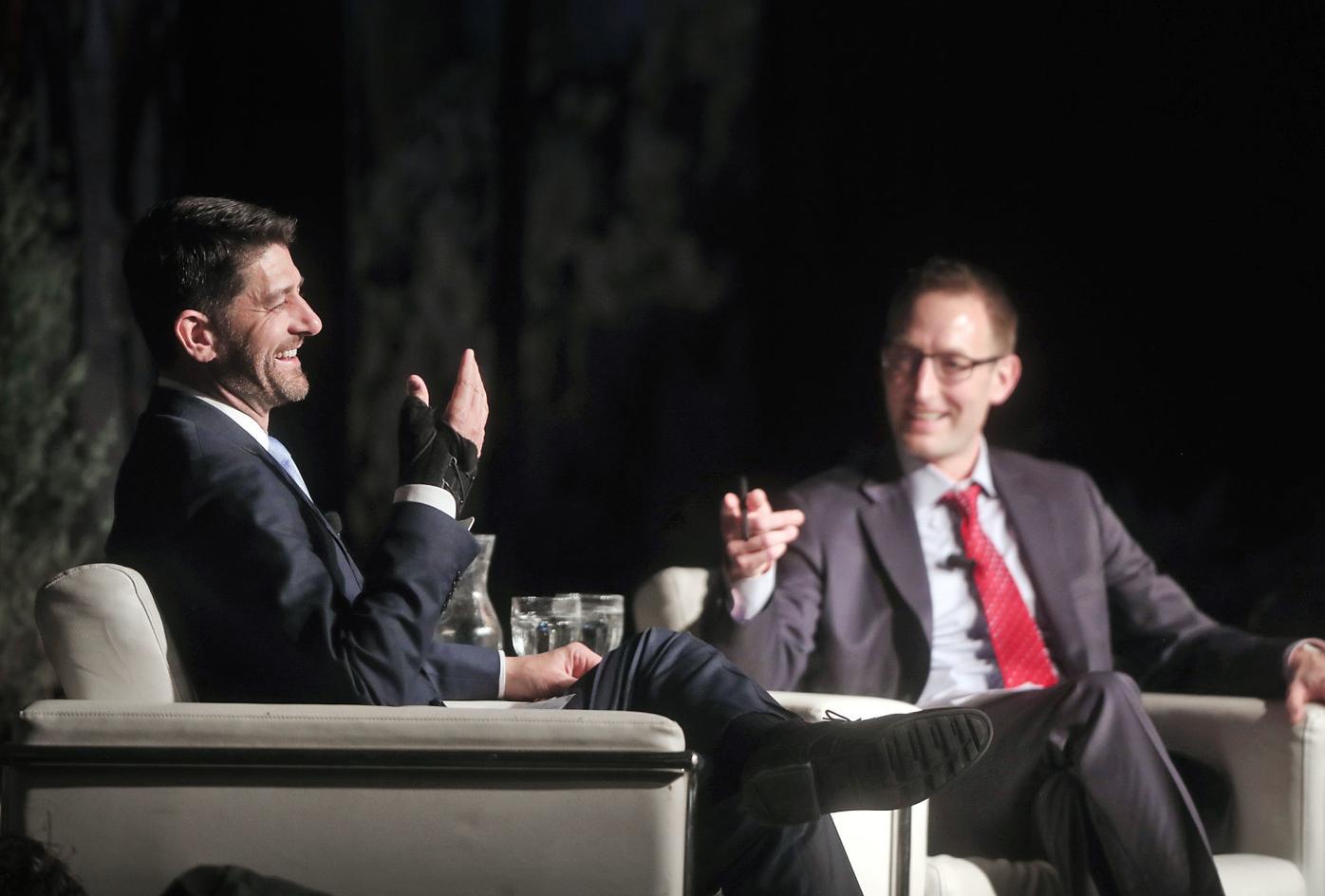 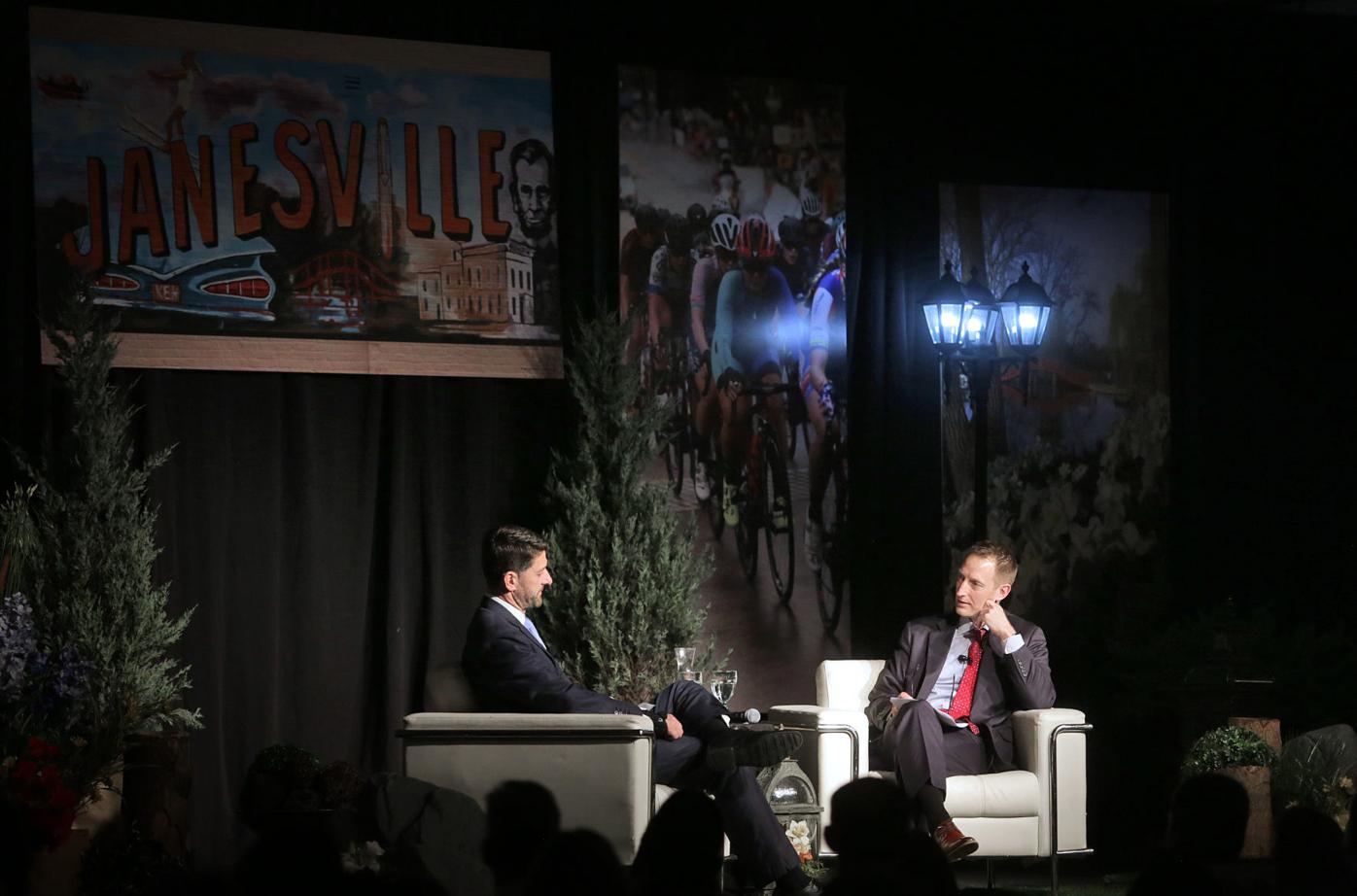 What’s next for Paul Ryan has been a question on his hometown’s mind since he announced he wouldn’t run for re-election nearly one year ago.

Tuesday night, the longtime Republican congressman told some of his plans to about 700 people attending Forward Janesville’s annual dinner.

Ryan said he is working at 101 S. Main St., the offices of a foundation he is establishing to work on the ideas in two laws he pushed through Congress to address poverty.

His longtime chief of staff, Andy Speth, is running the American Idea Foundation, he said. The focus is to make sure the laws are “properly implemented,” he said.

Longtime Ryan campaign finance director Susan Jacobson, who is working for the foundation, said it will be launched later this year.

Ryan said he also will teach economics and government courses at a Midwestern university. He couldn’t say where but said it would be announced soon. And he’ll be doing speaking engagements and is on the boards of some charities that focus on poverty, including one where he joins NFL great Deion Sanders to keep kids out of gangs in North Dallas, he said.

He said he has also “joined a couple of boards.” One of those is Fox Corp., which announced Ryan’s appointment March 19. Fox Corp. comprises Fox News, Fox Sports, the Fox Network and Fox-owned TV stations.

Ryan did not give a formal speech. He sat in an armchair on a stage across from Tim Lindau, vice chairman of the board of Forward Janesville, who posed questions and introduced Ryan as “the speaker, our neighbor, our friend, Paul Ryan.”

Ryan, of course, is a native Janesvillian who spent 20 years in the House of Representatives, running for vice president in 2012 and rising to the House’s highest leadership post in 2015 before retiring in January.

In answering Lindau’s question, Ryan said a lot about his life so far, his family and how it feels to be out of Congress for the first time in 20 years.

Lindau jokingly asked him about running for president twice and didn’t get a serious answer.

The crowd at the Holiday Inn Express was warmly receptive, standing to applaud when he was introduced and at the end of the presentation.

Ryan talked for 45 minutes. Some excerpts:

Asked about the biggest issues facing the nation, Ryan said they were entitlement reform, including health care, and immigration reform.

Ryan called those “the two big things that got away” when he was speaker, “and I think it was because of our politics.”

Fix those two things, “and we will have another spectacular American century,” he said.

“We have such a bitter, polarizing politics today, and it is not simply because of this person or that person. It is the era we are in, where digital technology, algorithms, are basically feeding off of anger and bad, dark emotions. There is a whole cottage industry in Washington of people who make a lot of money getting you mad, getting you upset,” he said.

The news media are going through a tumultuous time with all the “digital disruptors” and the chase for TV ratings, which feeds the situation, Ryan said.

“So we as a society have to figure out how to get out of that, how to overcome that, how to get a cohesiveness back to our society so we can tackle these big problems creatively.”

The night included a lot of fond memories of Janesville, and Ryan ended the evening thanking the community for being so accepting and kind to him and his family—even though, he said, many here do not agree with him politically.

The University of Notre Dame announced Monday that Paul Ryan of Janesville will be a guest lecturer during the next academic year.