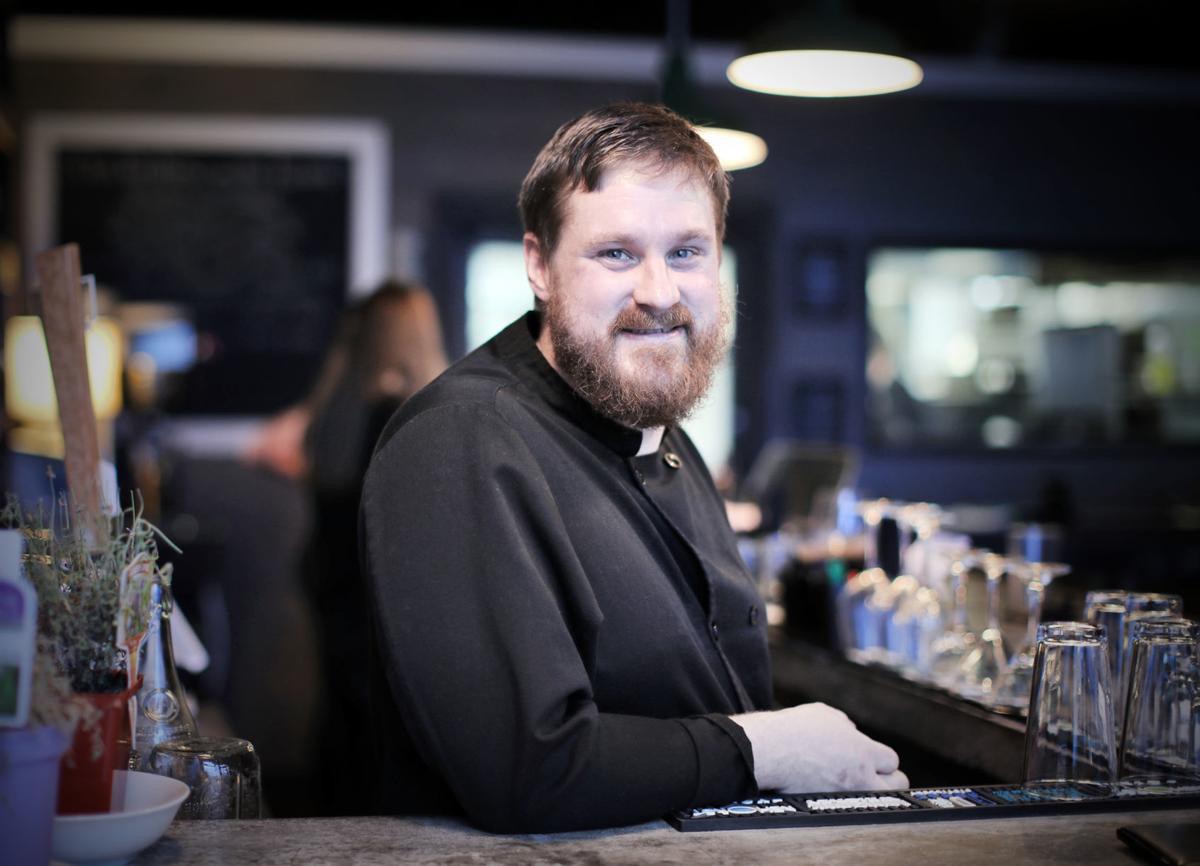 Tyler Sailsbery of The Black Sheep in Whitewater was worried that coming out about his sexuality would hurt his business. But in a Facebook post, he said he no longer wanted to keep his true self or his relationship hidden. 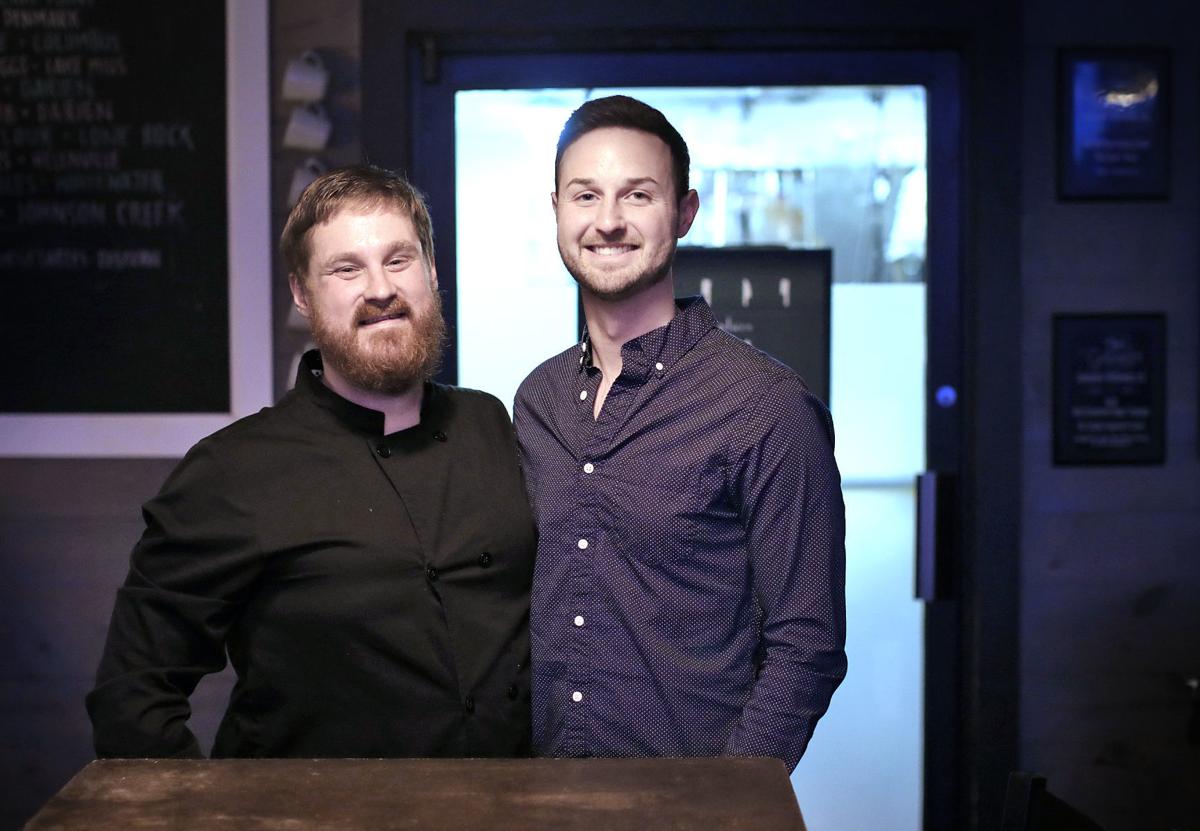 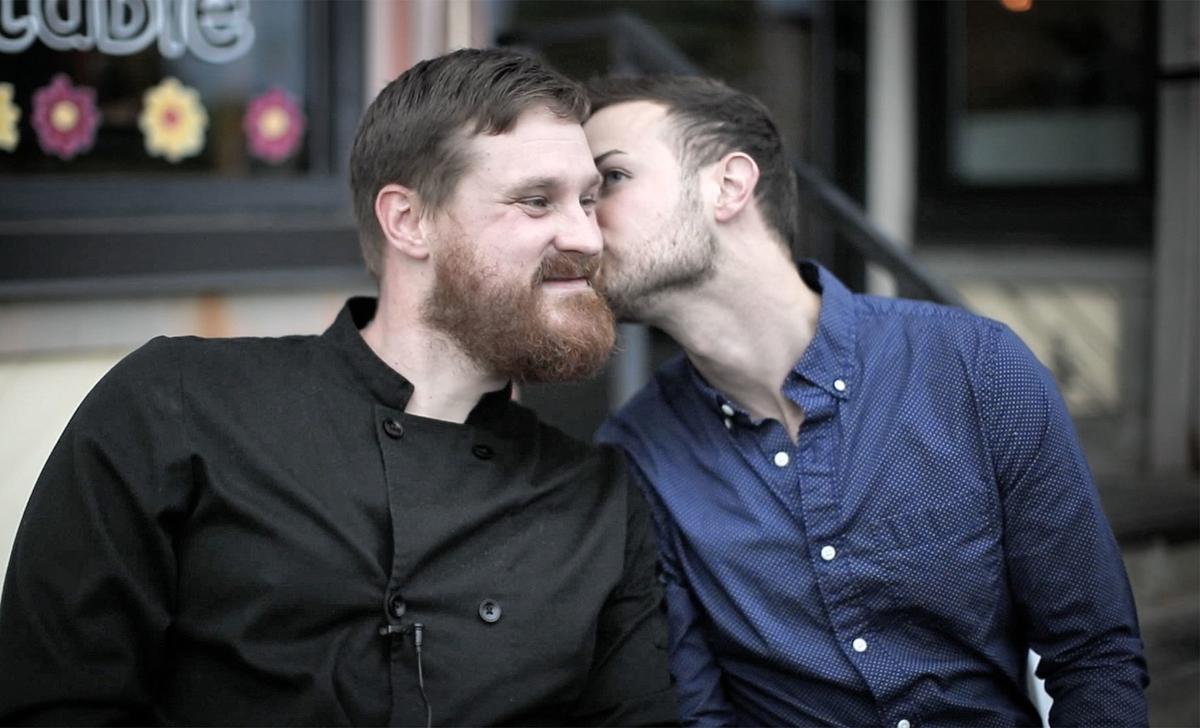 Tyler Sailsbery, left, is kissed by boyfriend, Brian Laning, during an interview outside his Whitewater restaurant, The Black Sheep.

Tyler Sailsbery started typing, and then he cried.

He erased what he wrote and started again ... and again, and again for what felt like 30 times over.

Then Brian Laning called. It was June 20, Brian’s birthday. Brian and Tyler talk at 10:30 p.m. every night, so Tyler knew he had a deadline.

But Tyler needed 15 more minutes to finish Brian’s birthday present. He would have to call him back.

His secret was out. He was out. There would be no more “living in the shadows.”

Tyler, owner of The Black Sheep restaurant in Whitewater, composed a 314-word Facebook post for Brian. The two were dating and in love. The owner of the prominent local business was gay.

Nothing else for me

Sitting in front of the restaurant on Whitewater Street, Brian said Tyler was “super adventurous.”

Tyler agreed. It’s like he’s not afraid of anything. Except for years, he was afraid of that moment—of letting the world know who he really is.

There were personal reasons. Tyler didn’t want others to think differently of him. Coming out, he said, felt like a political stance. He didn’t want to alienate people.

Tyler, 34, hid his internal tension in his job. He said he became a workaholic because he assumed he would be single until he died.

“And I thought, the only thing I have in life is this,” he said. “I didn’t think there was anything else for me ... for a family, for a relationship. So I could be married to work and not worry about anything else.”

There were also business reasons. Tyler kept all of this to himself because he owned a business in a small town. His employees depend on him. What if coming out tanked the restaurant? He thought this was his problem, and that he shouldn’t bring it in to work.

But living that way “sucked.” Tyler said it felt “crappy.”

Brian, who lives in Milwaukee, couldn’t really hang around the restaurant. He couldn’t join Tyler at events or activities around Whitewater. There was an hour-long drive before the two could enjoy breakfast together.

Tyler couldn’t tell people about his first date with Brian, which was near the beginning of 2018.

The first time the two hung out, Tyler made dinner at The Black Sheep—while it was closed. He wanted it to be somewhere public, but not too public.

Slowly, Tyler began to tell others close to him about Brian. Before telling his parents in March or April 2018, he told two employees.

“I needed somebody to hear it,” Tyler said. “Because I needed ... I just needed to be able to say it out loud and not have to worry about what the reaction was.”

Then came June 20. Tyler was close to sharing his story, but he needed one more push.

Lacey Reichwald, owner of the neighboring SweetSpot Cafe, was meeting with a colleague at The Black Sheep. She has known Tyler for about 11 years.

She said it surprised her when Tyler was talking openly in front of her colleague, which caught her attention. Maybe he was ready.

“Sometimes it’s just ... I need to say it to somebody to feel strong, because I feel weak,” he said.

Lacey is a business owner, so Tyler asked her what would happen.

“I never wanted to push him. I just wanted to encourage and support him,” she said. “Whether or not he decided to share it, I was gonna be proud of him.”

The restaurant was quieting down. Tyler told his staff he needed to go home and take care of something.

‘Until the voice is so loud’

Even though the response, which has more than 900 likes and 300 comments, was “overwhelmingly supportive,” the very acknowledgement of his true self still was uncomfortable.

Brian came out when he was 14, so being open about his sexuality has come naturally for some time.

“It was a little weird having to sort of come back in the closet a little bit when I was in this relationship,” Brian said.

But no more. Brian’s first reaction to the birthday surprise: He was “stunned.” Turning to look at Tyler, he said he was proud. Brian knows coming out “has to be championed by that person” and can’t be forced.

Why did Tyler share this, despite all his fears and reservations about coming out in a small town?

Tyler said he didn’t receive any vile or hateful responses. Two of the messages, however, said he should have kept his personal life private.

But Tyler responded and said people shouldn’t be afraid of sharing who they are. Much of Tyler’s decision came down to reaching people who are living in the shadows, as he was.

And without sharing who he is, people who discriminate against the LGBTQ community won’t change how they think.

Now, Tyler and Brian can be seen.

It’s still new, though. The two hung out for a few days after Brian’s birthday.

They finally got to post pictures about it on Facebook “like a normal couple,” Tyler said, beaming after putting his arm around Brian as they sat for an interview outside The Black Sheep.

Neither imagined such a slight display of affection would be possible for them.

As he was with his original disclosure, Tyler was hesitant about doing an interview. But his hesitance is exactly why he felt he needed to do it.

Tyler remembered seeing a Facebook post from an openly gay Milwaukee restaurant owner to celebrate June as Pride Month. One person left a nasty comment vowing never to eat at the restaurant again.

While it is “awesome” that he hasn’t experienced anything like that in Whitewater, Tyler said it got to the heart of why he needed to stand out.

Brian leaned over and gave Tyler a kiss on the cheek.

"Happy Birthday to the best man I know. My gift to you is being true to our love by finally overcoming my deep-rooted fear of it negatively impacting my restaurants. I am truly sorry that I wouldn't let you share those special moments we have had through this relationship because I worried what others may think and if I would alienate clients. Today and from this day forward, I am choosing to be strong for you and with you so that other young business owners (and hopefully of all ages) never feel they have to choose between honoring their relationship publicly or having a successful business due to their public image. I love you to the moon and back and I stand proudly with you in this Pride Month and especially because on your birthday. I, and every member of my team, also stand with all members of our community this Pride Month as we honor the importance of the struggle for equality. It is my hope that through this public acknowledgement owed to you a long time ago, others no longer feel they have to choose between sharing their personal love or chasing their career goals. We live in a beautiful, awesome, world and I'm so excited that it keeps getting better. Pride Month should be about being true to oneself and the value of every relationship and you have shown me patience, compassion, and love throughout our entire relationship. I am proud of you every single day. Thank you for being proud of me in every moment I didn’t deserve it and loving me on all the days I most needed it. To every LGBTQ+ person who may share my fears, may your love overcome it and may your faith in a community that loves and supports you make you strong enough to speak or write your truth. Together we are better."