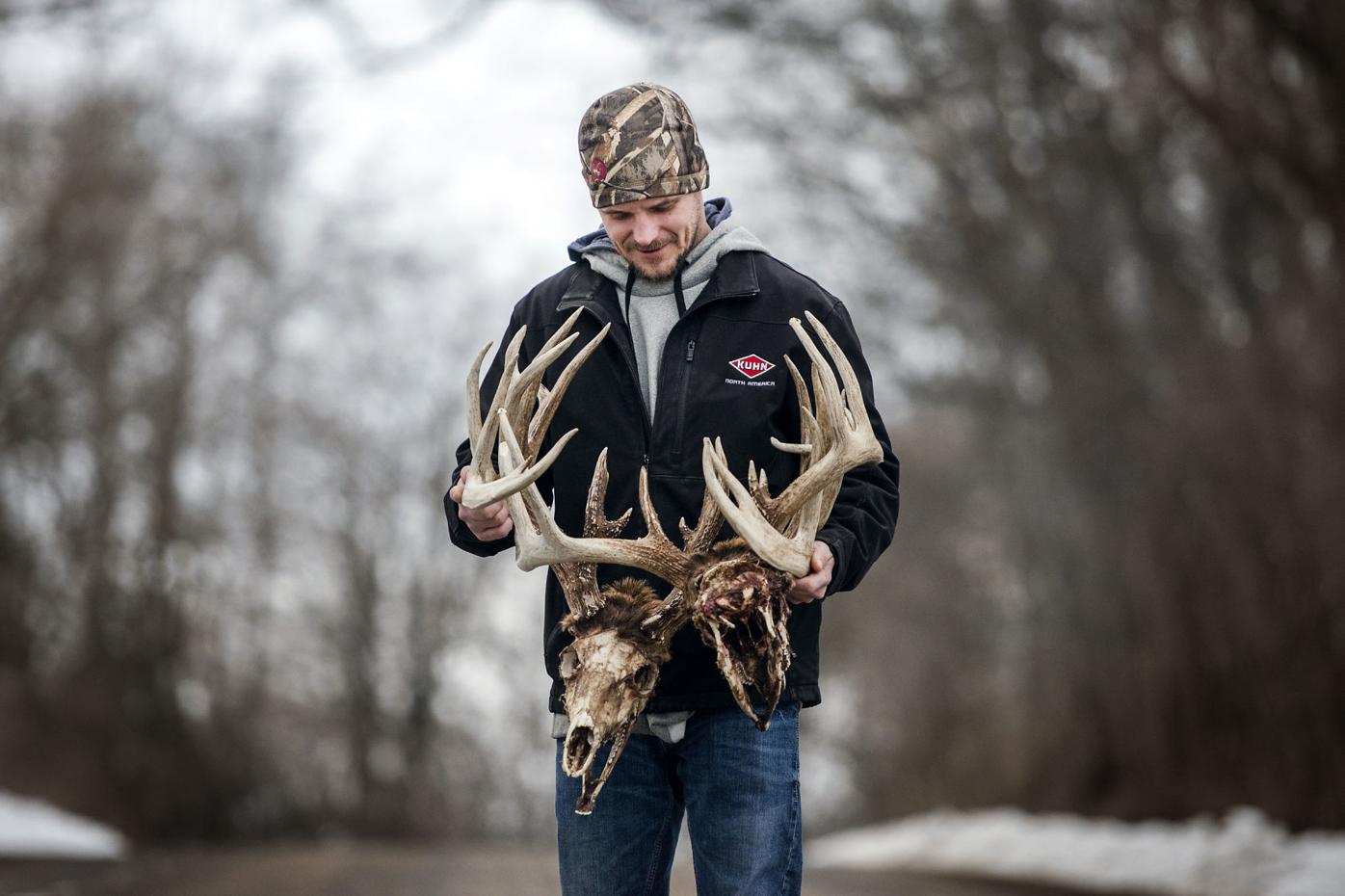 Nathan Olsen of Orfordville holds the antlers that could set a new record for Wisconsin on Monday in Brodhead. 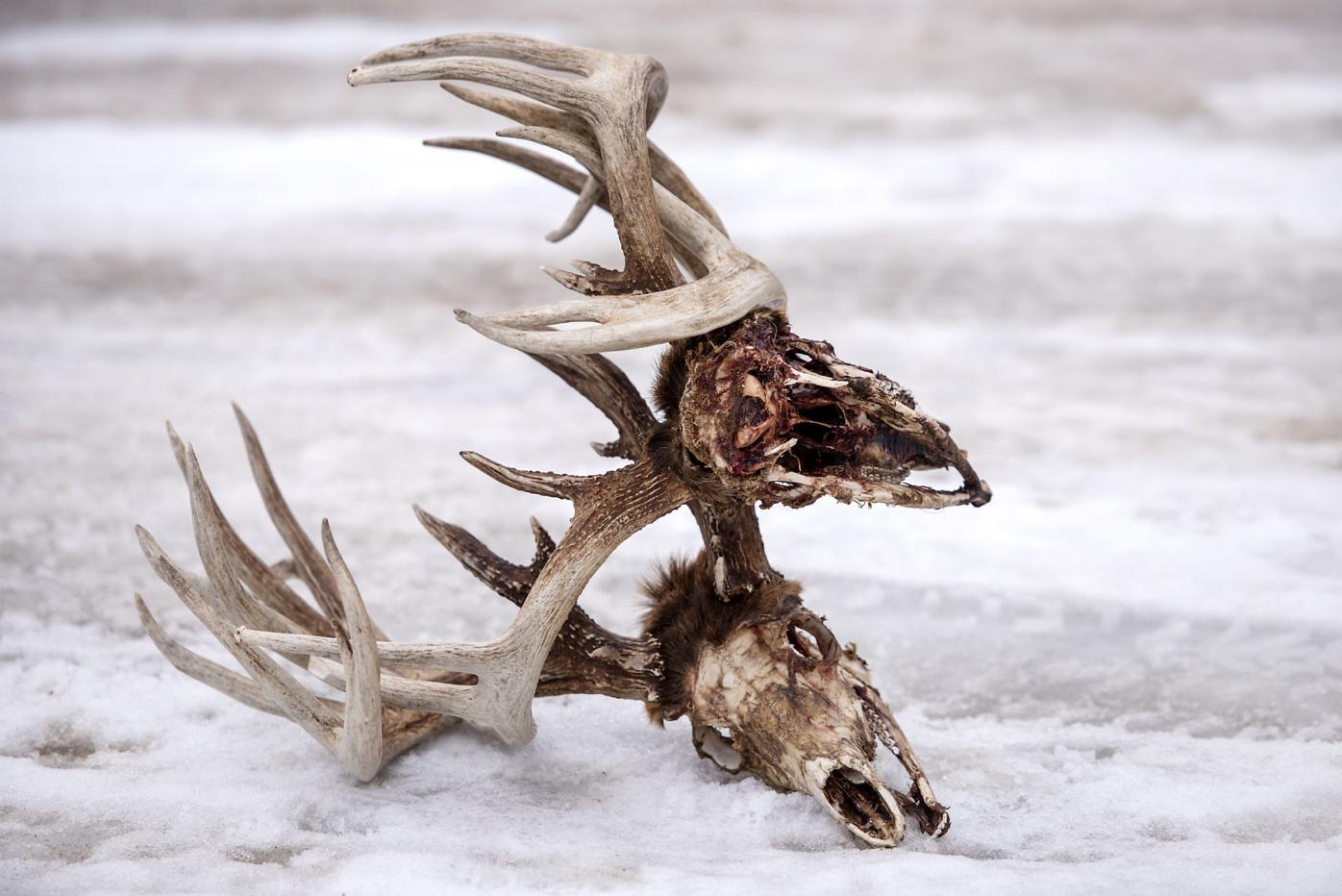 Nathan Olsen and his friend Travis Wuthrich found these interlocked sets of antlers just south of Orfordville while they were shed hunting Feb. 1. One of the deer, a 23-point buck, could set the record for highest-scoring buck found in Wisconsin. 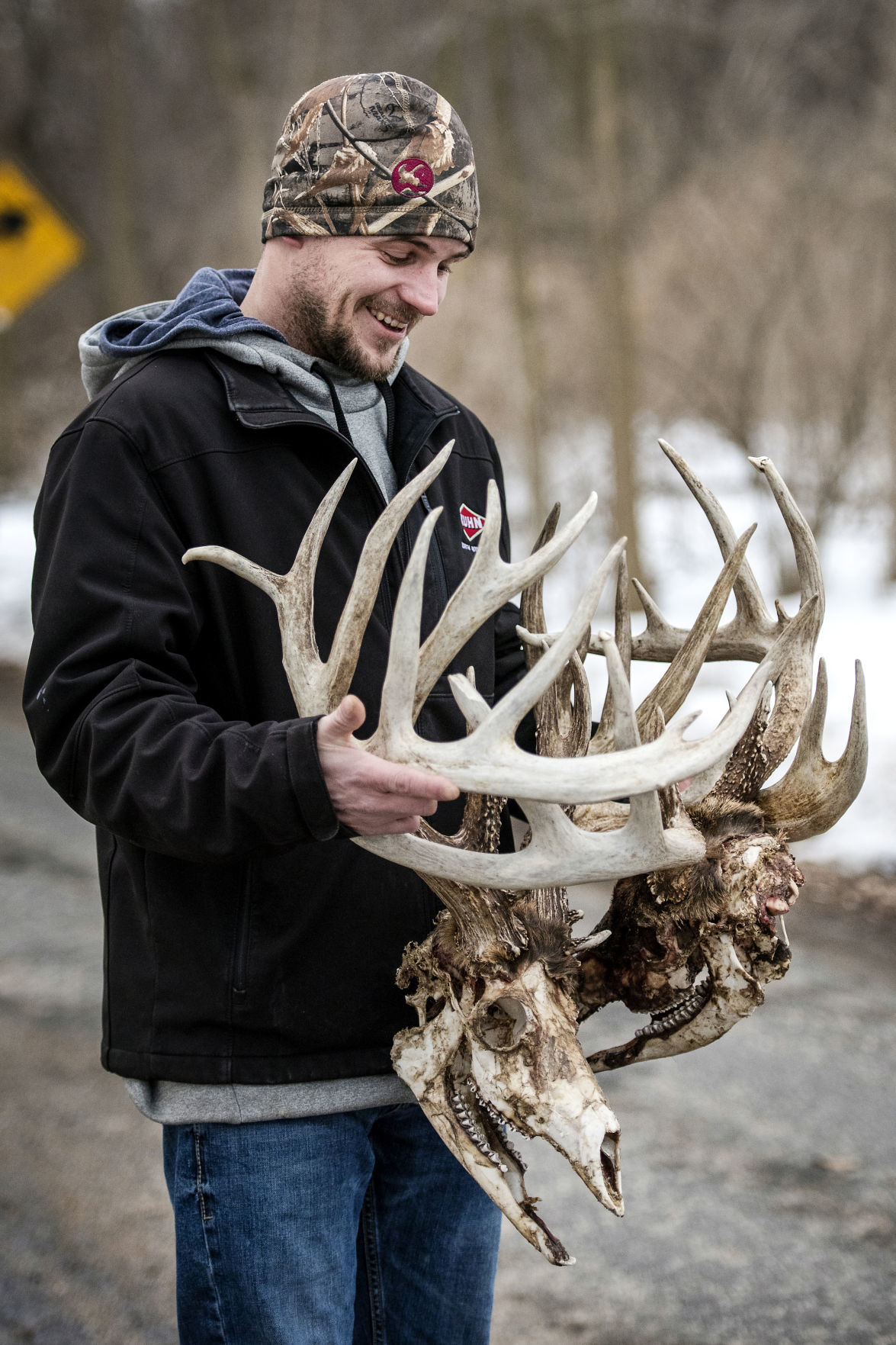 Nathan Olsen of Orfordville laughs while describing how he could barely speak after he discovered what could be the highest-scoring buck ever found in Wisconsin on Feb. 1. The buck will be scored by a six-person panel at the Wisconsin Field and Stream Deer and Turkey Expo in Madison in early April.

Nathan Olsen of Orfordville holds the antlers that could set a new record for Wisconsin on Monday in Brodhead.

Nathan Olsen of Orfordville laughs while describing how he could barely speak after he discovered what could be the highest-scoring buck ever found in Wisconsin on Feb. 1. The buck will be scored by a six-person panel at the Wisconsin Field and Stream Deer and Turkey Expo in Madison in early April.

Hunting for shed deer antlers has been a ritual for Nathan Olsen each winter since he began hunting more than 20 years ago.

The 33-year-old Orfordville man stumbled upon the find of a lifetime Feb. 1: not one, but two sets of gigantic antlers belonging to a pair of bucks that fought, got their antlers tangled and eventually died together.

One of the deer, a 23-point buck with a 17½-inch spread, could be the highest-scoring buck ever recorded in Wisconsin.

“Everything that’s happened in the last month, I don’t even know the words to say,” Olsen said. “It’s put a smile on my face, and I still can’t believe it.”

Bucks lose their antlers in winter and regrow them in spring and summer. Hunters sometimes look for shed antlers and collect them to get a better idea of the size of bucks in the area.

Olsen finds time to shed hunt whenever he’s not working or coaching wrestling.

He was shed hunting south of Orfordville with friend Travis Wuthrich when they found the locked sets of antlers. Olsen had turned to talk to Wuthrich when he noticed the carcasses and antlers under a tree.

Wuthrich was watching his dog run while looking for antlers a few feet behind Olsen, who was so surprised he couldn’t speak.

“He freezes and does that (points), and so I come around, and as soon as I seen it, I was like, ‘Oh my God, it’s two huge bucks.’ And then as I started looking it over, I realized, ‘Nate, oh my God.’ This is the biggest deer I’ve ever seen in my life, undoubtedly. It’s insane,” Wuthrich said.

Bucks are scored on the circumference, length and alignment of their antlers. Deductions come from abnormalities, such as differences in circumference and nonmatching points on either side.

The current record-holder is a 30-point Buffalo County buck killed in 1973 that scored 253. A representative from the Wisconsin Buck & Bear Club came out to see Olsen’s shed and felt confident after preliminary measurements that his buck would set a new record.

Taxidermist Josh Mersberger said he has seen a lot in his years of crafting deer mounts, but even he was in awe when Olsen pulled the locked antlers out of his truck.

“This is a first. I’ve never seen anything that big,” Mersberger said.

Olsen and Mersberger are still fine-tuning what the mount will look like and if they will mount the two deer together or separate, but Olsen said the final result will be something that will make him proud.

The antlers need to dry for 60 days after they’re found before they are scored. To make the discovery official, the shed will be scored by a six-person panel from the Wisconsin Buck & Bear Club at the Wisconsin Field & Stream Deer and Turkey Expo in Madison on April 3-5.

“I’ve been doing this for a long time, and I haven’t ever seen something like this,” Olsen said. “I’m real excited for April 3.”