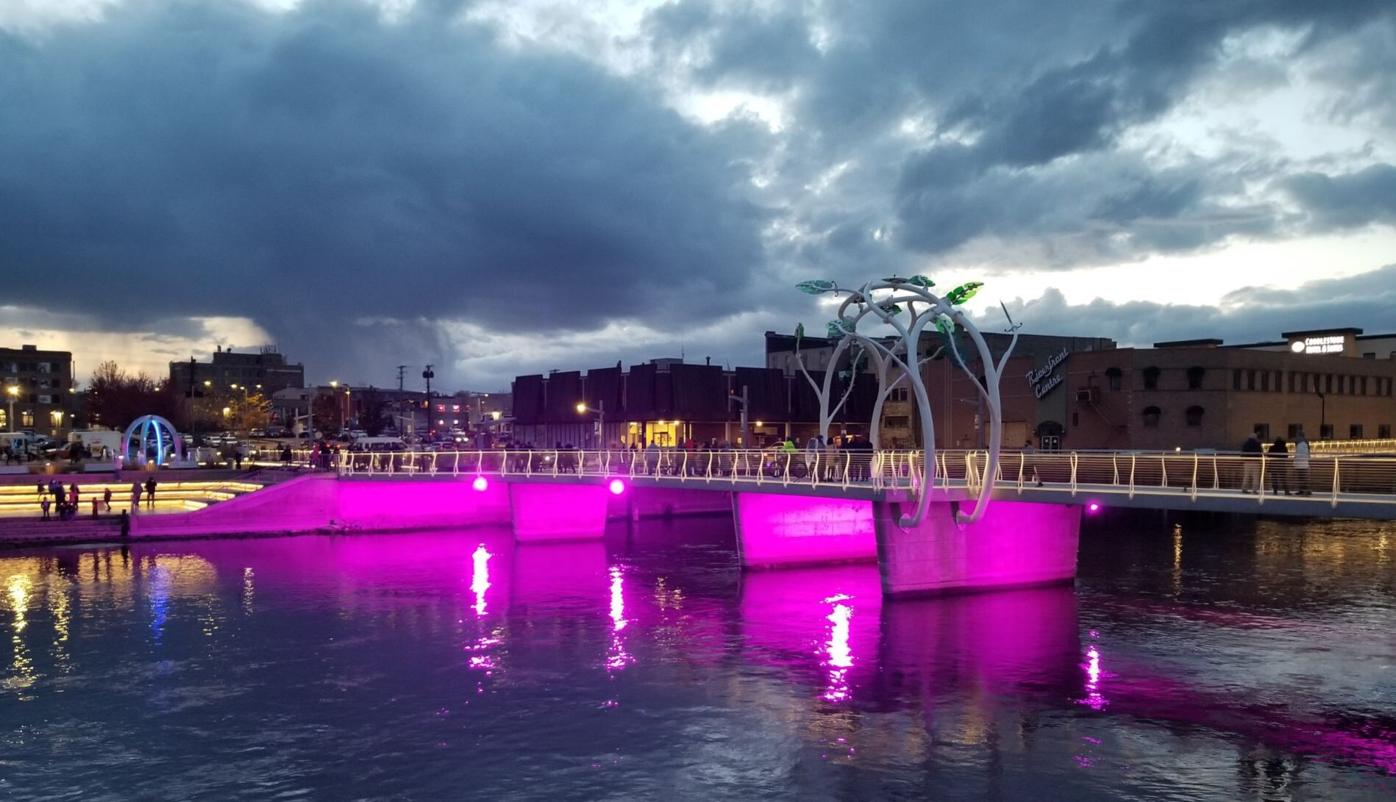 Automated lights turn purple and illuminate the Rock River at dusk Friday during the unveiling of the new Mick & Jane Blain Gilbertson Family Heritage Pedestrian Bridge tin downtown Janesville. The lights are part of millions of dollars in private-side revitalization work on the riverfront in downtown Janesville. Hundreds of residents Friday attended a ceremony by the city and the private ARISEnow group as they unveiled the new pedestrian bridge and east side town square completed this week. 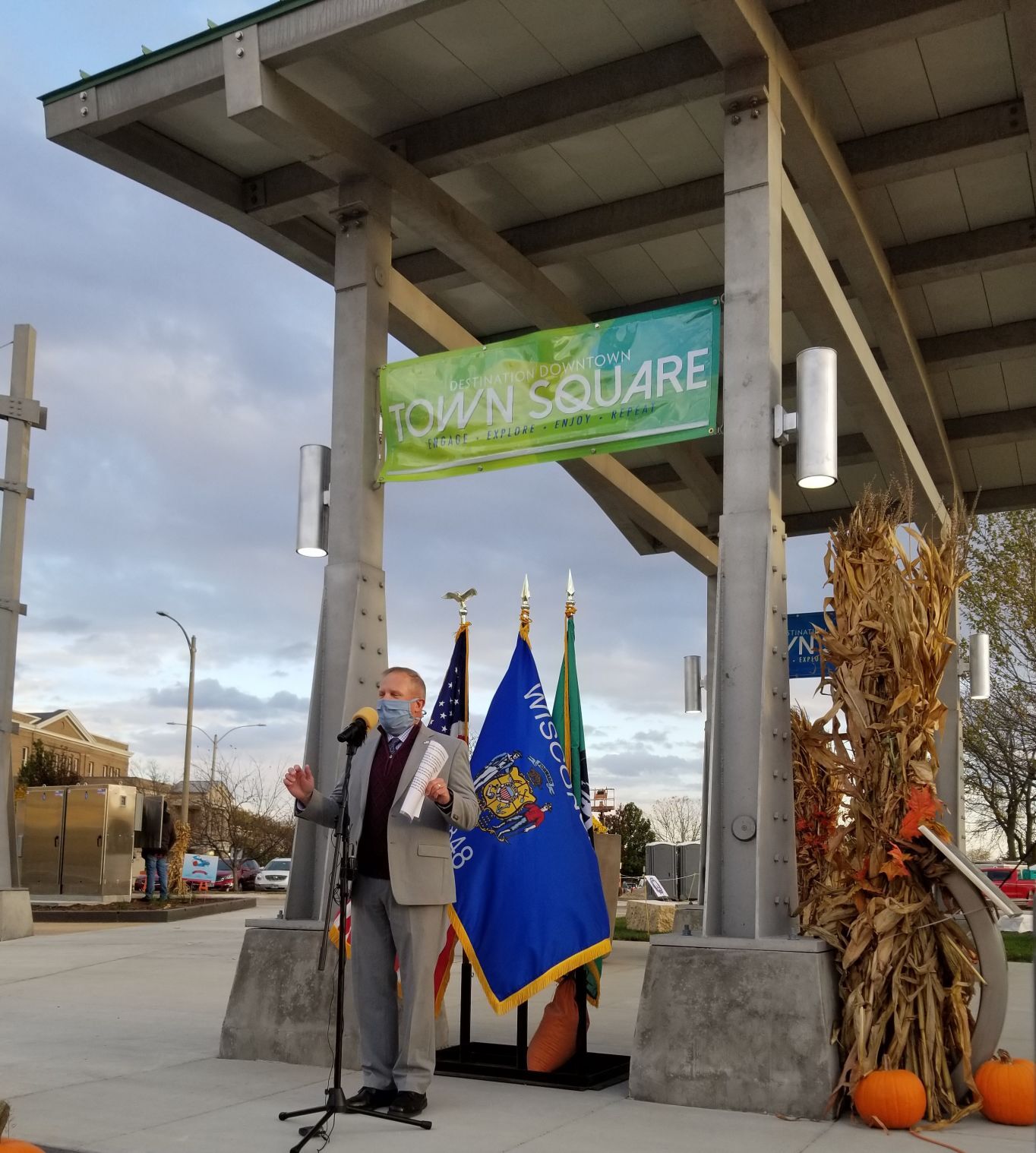 City Manager Mark Freitag speaks Friday at the unveiling of the ARISE East Side Town Square along the riverfront in downtown Janesville. 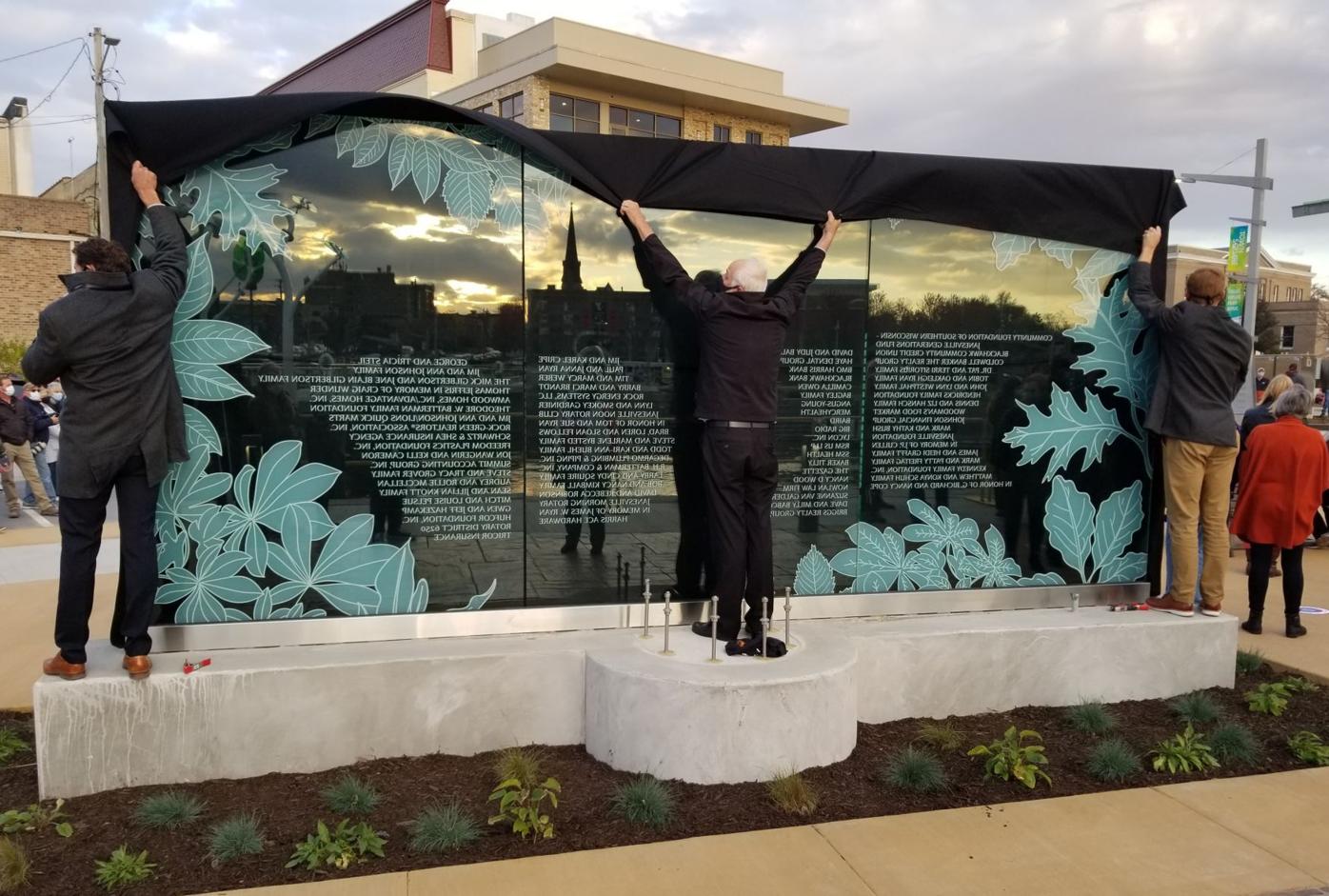 Janesville businessmen Tim Weber, left, Jeff Hazekamp, middle, and project engineer Brett Oftedahl of Madison firm Strand Associates hold a black cover in place during the unveiling of a see-through glass donor wall Friday at the grand opening of the public-private ARISE East Side Town Square in downtown Janesville. The wall is inscribed with names of donors to the multi-million dollar private work along Water Street that is part of an ongoing revitalization of the downtown riverfront. 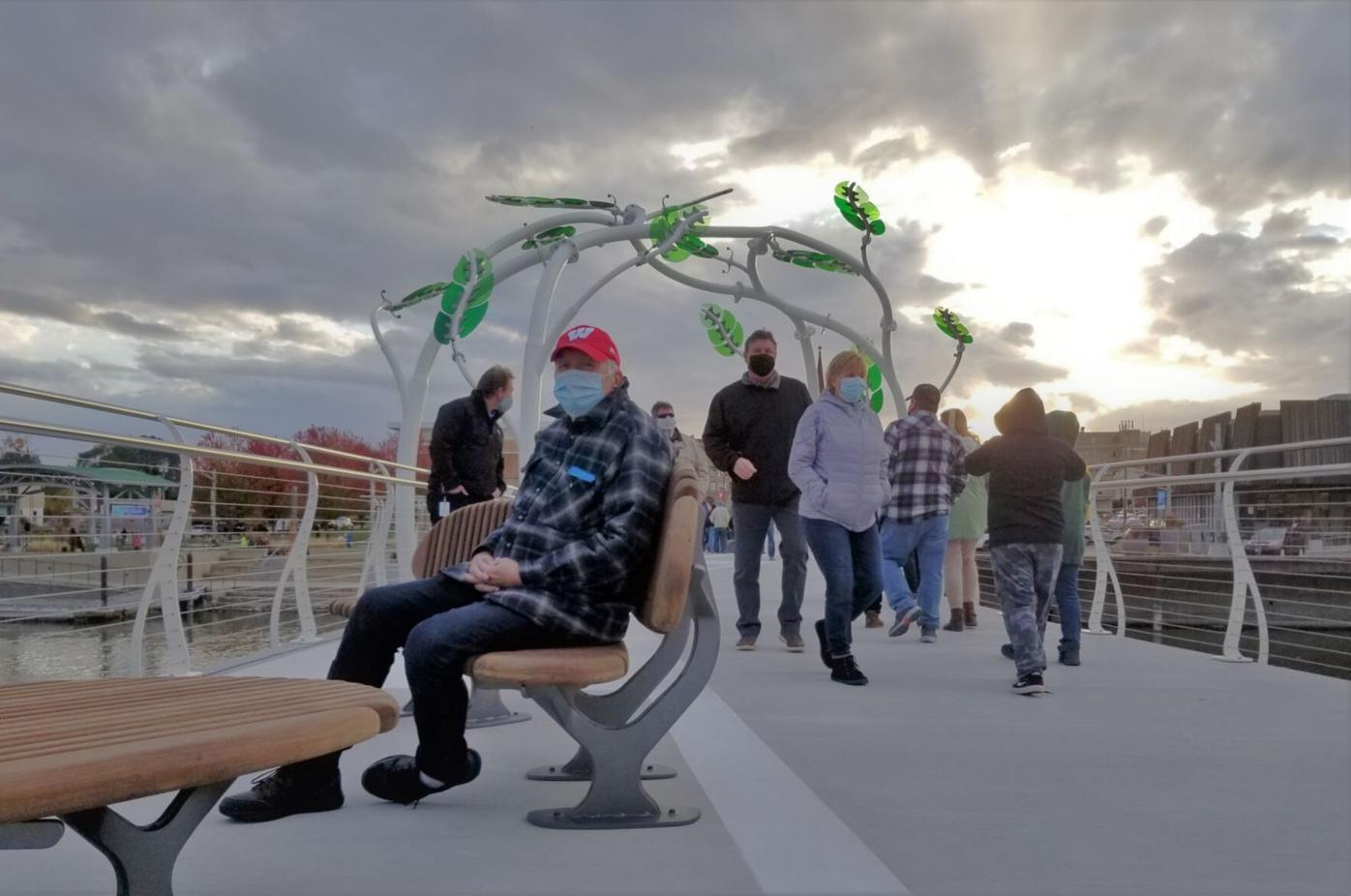 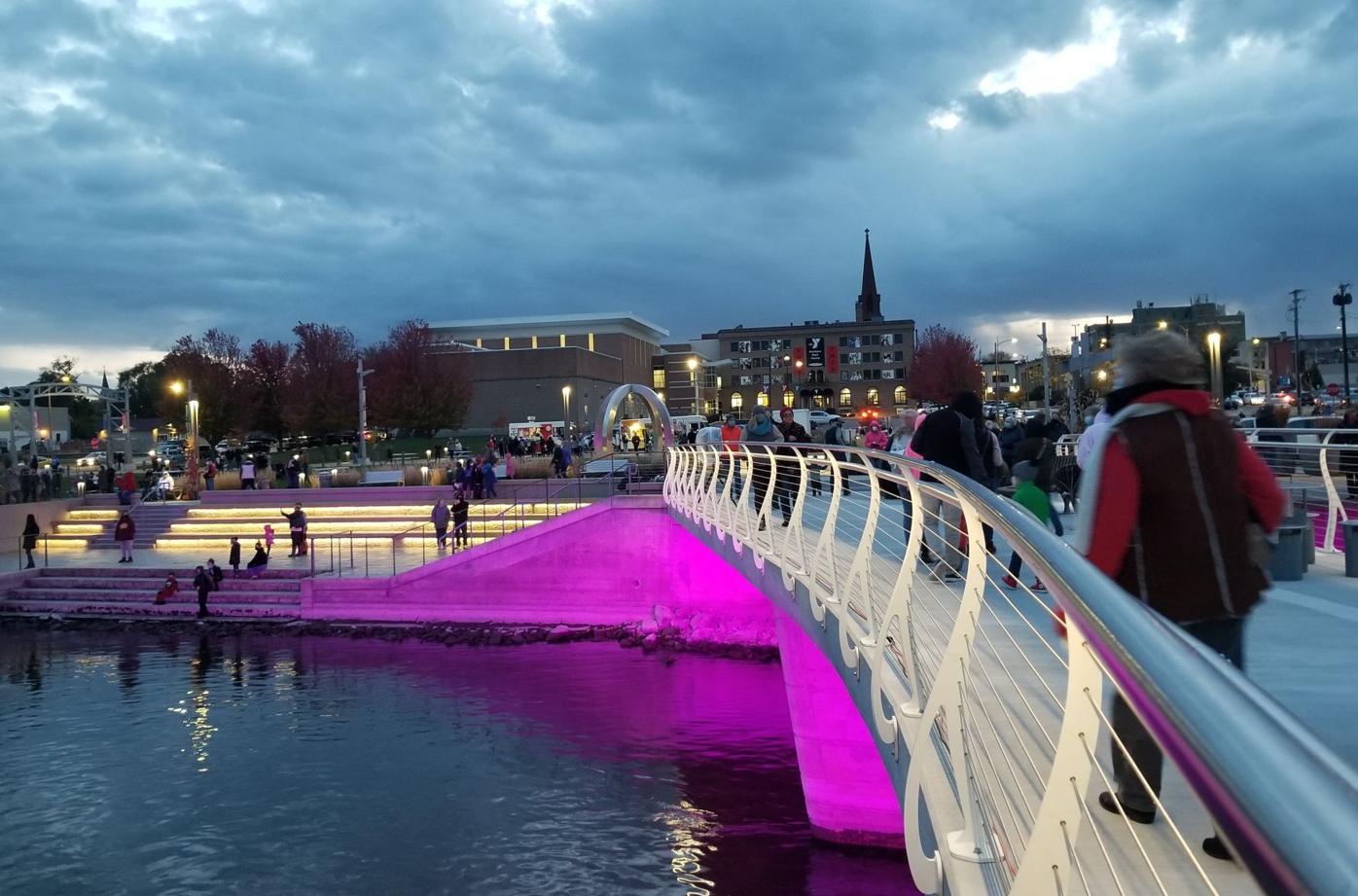 At dusk Friday in the heart of downtown Janesville, a set of automated lights under the bridge decks flashed brilliant blues, reds and purples off the surface of the Rock River.

The lights produced a brighter display of color than even the blazing autumn leaves on trees downtown. They’re one of the showiest attractions at the new Mick & Jane Gilbertson Family Heritage Pedestrian bridge and ARISE East Side Town Square on the riverfront in downtown Janesville.

The city and private stakeholders who for years have worked toward the multi-million dollar addition to the existing town square on the river’s west side celebrated the grand opening of the square and the bridge, a public-private revitalization effort more than a year in the works.

Larry Squire, a Janesville bank executive and one of the private stakeholders in the revitalization project, told a crowd of a few hundred that the scene Friday night, and the future of downtown, just got several shades brighter.

“We have something here that is going to inspire a lot of people for a long time. And it will be a catalyst downtown,” Squire said. “We’re in great shape.”

At the bridge’s center is a metal sculpture that arches overhead—an impressionist rendering of four interlocked trees that create an arbor on the bridge, replete with glass leaves designed to reflect and capture lights on the bridge and sculpture.

One Janesville woman, Macy McBeth Ryan, stood in the middle of the bridge in wonder Friday evening. She looked up at the tree sculpture, then scanned the crowd that had gathered for the public space’s grand opening.

“It’s all beautiful. I think it’s totally going to revitalize downtown. Arts and culture have such a place in rejuvenation,” Ryan said. “I look at it as living proof of how this community is united and proof that resiliency and creativity go hand-in-hand.”

On Friday, Julie Seales, an apartment tenant whose upper-floor condo has a deck overlooking the river, the new bridge and the pavilion, said she was awestruck by the new town square.

“We’ve lived here since the whole riverfront was turned to dirt and rubble,” Seales said. “It’s been unbelievable to see this take shape. At first I thought it would be a little footbridge, but look at it. Every day it seemed to get bigger, and grander and fancier.”

She said the bridge’s centerpiece tree sculpture, conceived as a symbol of resilience and unity between the city’s east and west sides, was carefully designed to be a focal point but not block views of the natural river surroundings and downtown.

Yet, the 25,000-pound sculpture is predominantly visible from any vantage point at the town square, which is by design.

Russell Smoak, the structural engineer who co-designed the sculpture, said the most difficult part of installing the big, white set of interlocking metal trees was to line up the segments.

On paper, the tree’s flange connections were designed to interlock and interweave branches that rise from the metal tree trunks. But aligning the sculpture’s segments after attaching their bases to bridge pilings required some “field adjustments,” Smoak said.

“You can sit and dream in the sky, but then you have to look in the real world and see whether two sides will marry up,” Smoak said. “But in this case, after a little bit of extra work, they did. They married up. It all really came together.”