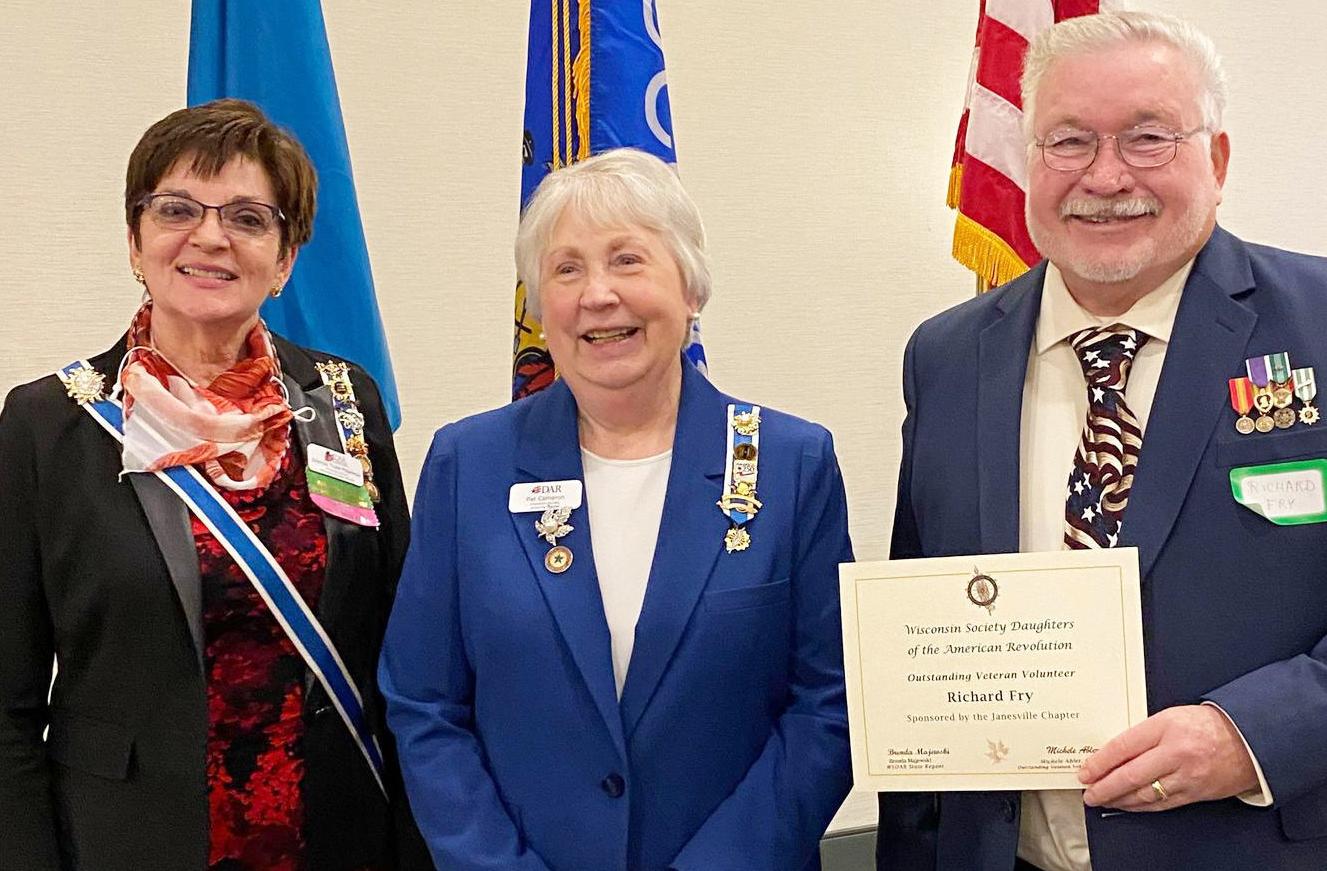 Richard Fry of Milton was named the Wisconsin Society Daughters of the American Revolution 2021 Outstanding Veteran Volunteer. In the photo with him from left to right are Wisconsin State Regent Brenda Majewski and Pat Cameron, a Milton resident and member of the Janesville DAR chapter. 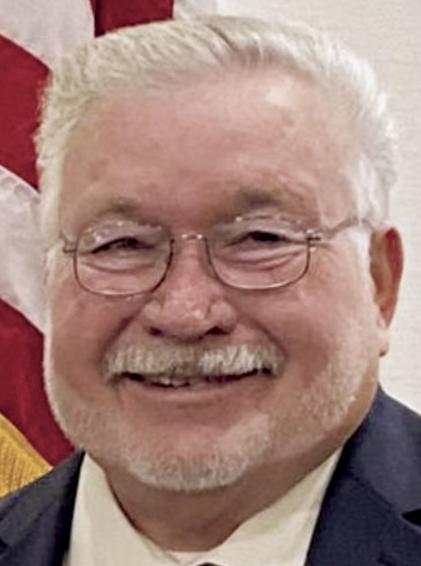 Richard Fry of Milton was named the Wisconsin Society Daughters of the American Revolution 2021 Outstanding Veteran Volunteer. In the photo with him from left to right are Wisconsin State Regent Brenda Majewski and Pat Cameron, a Milton resident and member of the Janesville DAR chapter.

A Milton veteran has been recognized for his volunteerism at the state and regional level.

Richard Fry has been named the 2021 Outstanding Veteran Volunteer by the Wisconsin Society Daughters of the American Revolution. Fry was sponsored by the Janesville DAR chapter, which recognized him as the outstanding veteran volunteer at the local level.

After being chosen at the state level, Fry was selected by the National Society DAR North Central Division, which includes Wisconsin, Iowa, Illinois, Nebraska, North Dakota, South Dakota and Minnesota.

Milton resident Pat Cameron, a member of the Janesville DAR chapter, nominated Fry for his role in designing, constructing and raising money for the Milton Area Veterans Memorial and pavilion in Milton’s Veterans Park.

Cameron said Fry embodies the Daughters of the American Revolution’s mission of recognizing and supporting veterans.

With the help of friend and fellow veteran Jarrett Goodman and many others, Fry built the memorial and pavilion as a way to honor area veterans and created a space they and other residents can gather.

Fry enlisted in the Army in 1969, and by 1970, he was deep in the jungles of Tay Ninh Province searching for the North Vietnamese Army. While in Cambodia, he was wounded by an incoming mortar and spent 13 months recovering in hospitals.

He later received the Purple Heart and the Army Commendation Medal for heroism.

Despite his collection of awards, Fry likes to focus on the sacrifices made by all veterans.

He has volunteered for the American Legion Post 367, the Veterans of Foreign Wars Post 1879, the Disabled American Veterans and the Vietnam Veterans of America Chapter 409.

After returning from overseas, Fry suffered not only from physical injuries but also mental difficulties, which made it hard for him to maintain relationships and make decisions.

He credits his wife, Phyllis, for helping him achieve stability.

In 2007, Fry was diagnosed with post-traumatic stress disorder, and with his friend Jarrett Goodman’s help, he got the assistance he needed.

Because of his personal experiences, he talks openly with veterans and encourages them to seek mental health counseling.

Fry also has had medical problems, including heart disease, leukemia and diabetes, many of which he attributes to Agent Orange, a chemical once used by the U.S. military.

He once was told he might not live past 40. Today he is 71 and has six children, 15 grandchildren and three great-grandchildren who give him incentive for his life code: “Never look back.”

This is not the first time Milton has been home to a Wisconsin Society DAR winner.

In 2020, the Janesville DAR chapter nominated Val Crofts, then a Milton High School teacher, as the Outstanding Teacher of American History. Crofts won the statewide honor.

Daughters of the American Revolution

Founded in 1890, the National Society Daughters of the American Revolution is a women’s service organization whose members can trace their lineage to an individual who contributed to securing America independence during the Revolution War. There are over 185,000 members in 3,000 chapters in the United States and abroad. The mission is to promote historic preservation, education and patriotism. Any woman 18 years or older, regardless of race, religion or ethnic background, who can prove lineal descent from a patriot of the American Revolution, is eligible for membership.

The Janesville Chapter DAR each May assists Reginald Foster Chapter Colonial Dames XVII Century in placing cemetery flowers on the graves in Janesville’s Potters Field, where over 276 people are buried in numbered graves and later were identified from records as residents of the poor farm or patients at the Rock County sanitarium or the insane asylum. Daughters also participate in events for veterans such as making and sending hundreds of thank-you and holiday cards to veterans in Wisconsin facilities. To educate children about patriotism and to increase awareness of the Revolutionary War, the Janesville Chapter DAR supports Cave of the Rock Society Children of the American Revolution and sponsors an American history essay contest. The DAR Good Citizen Program and Scholarship Contest encourages and rewards students who demonstrate the qualities of good citizenship. The program is open to high school senior seniors. The Janesville Chapter DAR was charted on December 4, 1895. For more information, visit www.darjanesville.org.