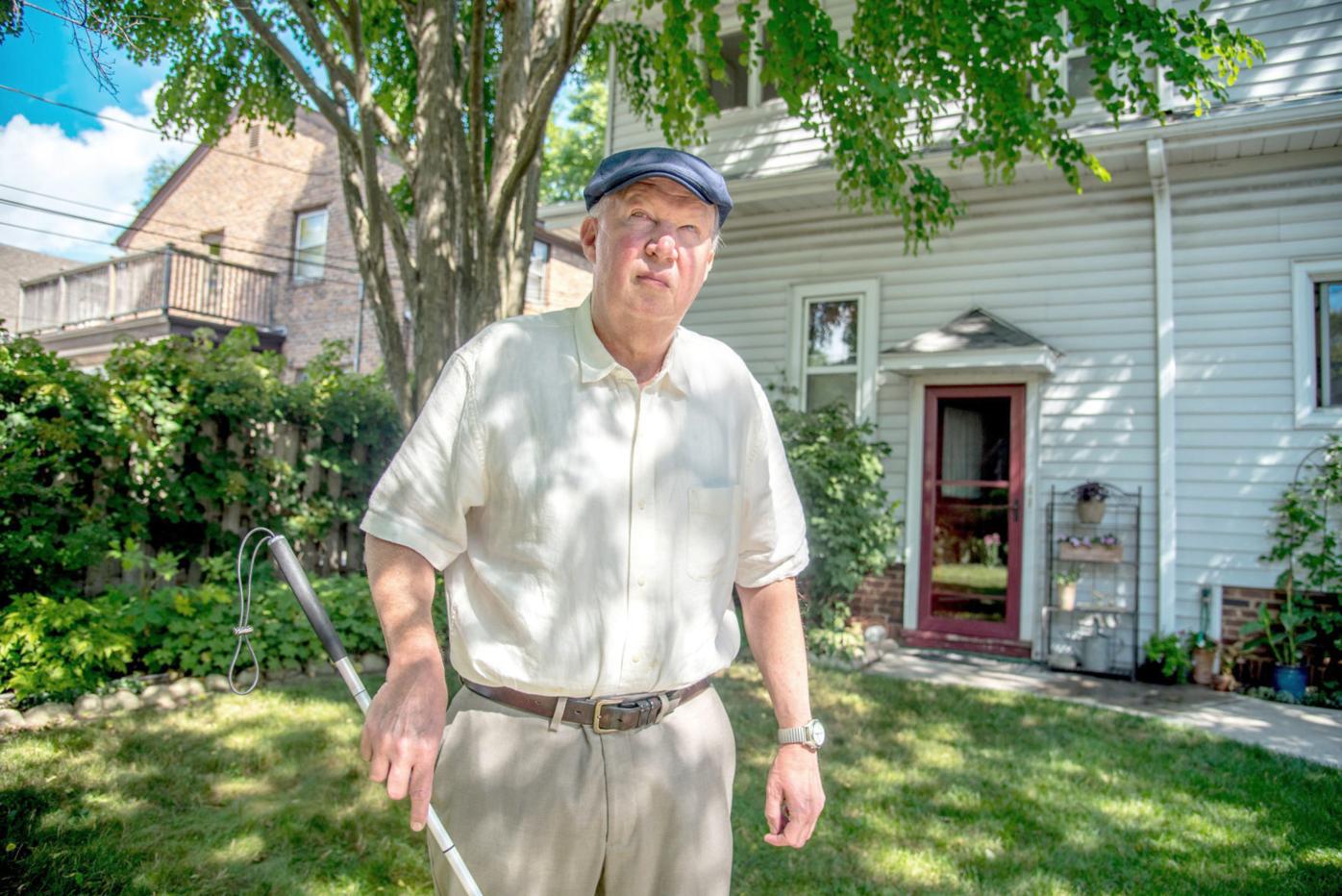 Don Natzke, 69, is seen in the backyard of his Shorewood home July 31. Natzke, who is visually impaired, was unable to vote in Wisconsin’s April election as fear of the COVID-19 pandemic kept him from his in-person polling place and he faced several hurdles casting an absentee ballot. 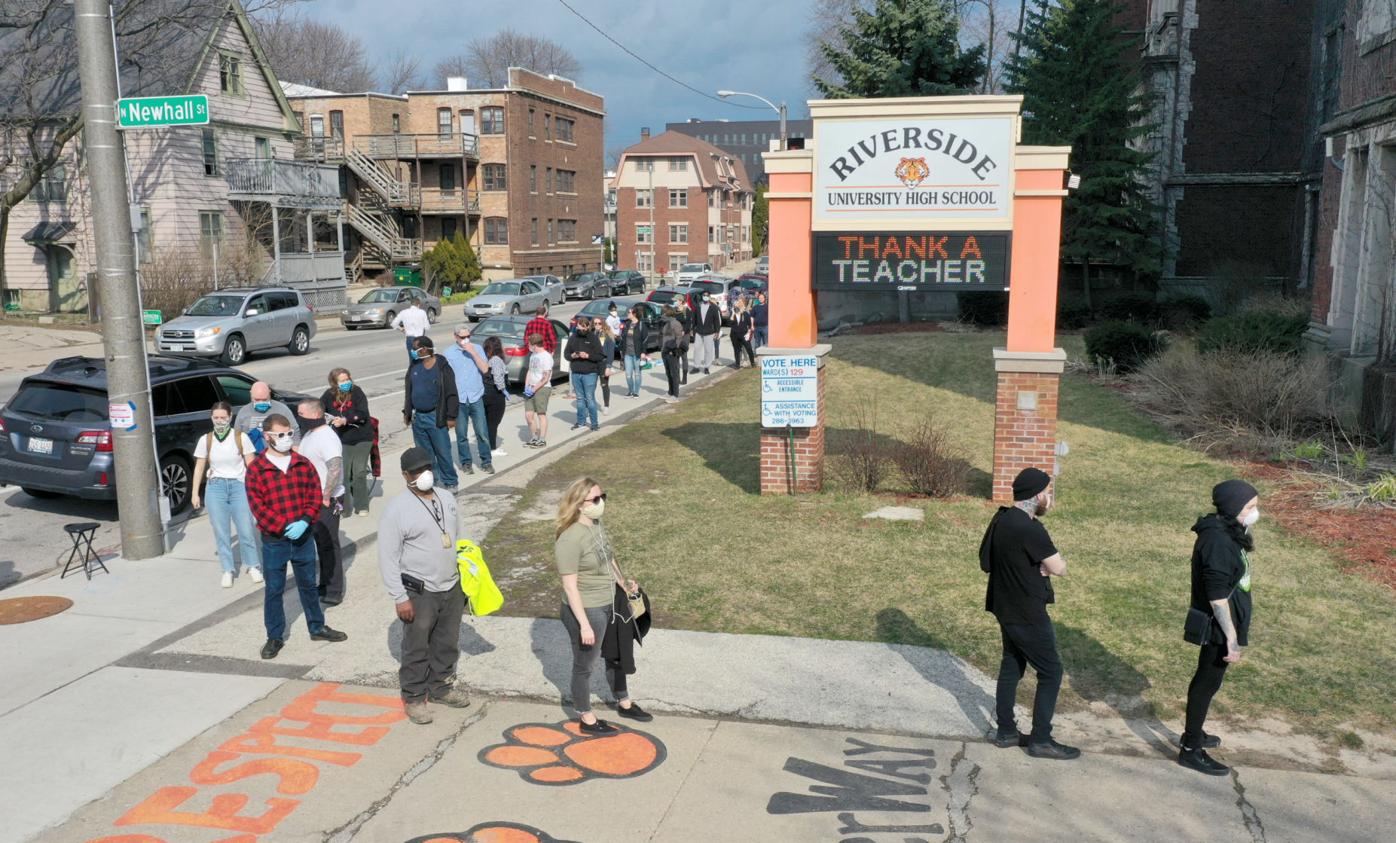 The voting line wraps around the block outside Riverside High School in Milwaukee during the presidential primary on April 7, 2020. Voters, including some with disabilities, say they were unable to cast a ballot in that election because of fear of the coronavirus.

Don Natzke, 69, is seen in the backyard of his Shorewood home July 31. Natzke, who is visually impaired, was unable to vote in Wisconsin’s April election as fear of the COVID-19 pandemic kept him from his in-person polling place and he faced several hurdles casting an absentee ballot.

The voting line wraps around the block outside Riverside High School in Milwaukee during the presidential primary on April 7, 2020. Voters, including some with disabilities, say they were unable to cast a ballot in that election because of fear of the coronavirus.

Don Natzke, 69, has lived nearly his entire life with a visual impairment.

Natzke previously served as the executive director of the Milwaukee County Office for Persons with Disabilities, where he promoted accessible governmental policies to include people with disabilities.

But when it came to Wisconsin’s April 7 election—the only in-person balloting held in the midst of the pandemic that month—the Shorewood resident hit a surprising roadblock partly because of his visual impairment.

Natzke was disenfranchised because recent surgery limiting his mobility and a fear of exposure to COVID-19 kept him away from his neighborhood polling site. Because of his age and underlying health conditions, for Natzke, complying with Wisconsin’s safer-at-home order meant not voting in person.

During a normal election, Natzke would use a headset and a computer to vote at the polling place less than two blocks from his home in suburban Milwaukee. And although state law allows blind voters to receive a ballot in Braille, Natzke said he did not realize that was an option.

“When I understood that the access to the voting site was going to be made more difficult for me due to the virus and to my health concerns, I requested an absentee ballot that would require me to submit a photo ID and a written request to my municipal clerk,” Natzke said.

The ballot he received was a regular absentee ballot, and he could not read it. Natzke’s partner also has a visual disability and could not help him with the task.

Undaunted, Natzke used a service that allows a visually impaired person to use a cellphone to receive guidance from a trained agent in a remote location. Natzke would take a picture of the ballot and the agent would guide him in filling it in.

“Trying to make that process work to get accuracy in terms of marking a ballot and to be able to complete all of the parts of it ended up becoming absolutely impractical,” he recalled. “There was not a good way to directly mark a ballot using that process to be able to accomplish it.”

Natzke felt he had run out of options.

“Ultimately, I determined that there was not a way I could have people enter my environment, complete the ballot, get it submitted and get that process accomplished,” he said. “So, though I’m an active voter and I regularly vote, there wasn’t what I felt to be a safe, accessible and reasonable way to approach submitting the ballot.”

Natzke was not the only voter disenfranchised by Wisconsin’s pandemic presidential primary, which saw last-minute court-ordered changes in key election rules that left some voters bewildered—and some casting ballots that did not count.

Some voters were afraid to go to the polls, and many voted absentee, according to a report by Wisconsin Election Protection and the League of Women Voters of Wisconsin, which gathered information from 744 voters. But as an overwhelmed election and postal system struggled to manage more than 1.2 million requests for absentee ballots, many ballots never made it to voters’ homes or never left the local clerk’s office.

“We heard from people who have certain disabilities or medical conditions where it just was not safe for them to go on Election Day to the polls, and so they did everything right to try and vote, but they just weren’t able to because the system failed them,” said Eileen Newcomer, the league’s voter education coordinator.

Other voters lacked the technology or knowledge on how to request a ballot, make or send a copy of a photo ID, or safely arrange a witness for their absentee ballot, the report found. And 23,000 absentee ballots that were filed were rejected—many because of errors made by first-time absentee voters, Wisconsin Watch and APM Reports found.

This time around, Wisconsin faces four ongoing federal lawsuits challenging state election laws, including three that allege the right to vote for people with disabilities was abridged April 7.

Jeff Mandell is a Madison attorney in a lawsuit brought by Disability Rights Wisconsin and other plaintiffs. His clients want to ensure all voters with disabilities are provided assistive technology if they vote early in-person and a means for them to use assistive technology to vote from home before the November election.

“We are asking the court to provide some relief for those people so they can have help to vote without taking COVID risks,” Mandell said.

Newcomer said voting is the way elected leaders share power with constituents, “and when people aren’t able to vote when they’re disenfranchised, that means that they are not allowed into the power-sharing process” that runs our country.

Natzke said he hopes for more “enlightened” leadership in Wisconsin to help people with disabilities vote in November. Right now, he sees his choices as trusting that his local polling site is safe during a raging pandemic or compromising his privacy and health by having someone enter his house to help him fill out and witness his ballot.

The April 7 election, he said, was a big disappointment.

“To not have my vote counted,” Natzke said, “it concerned me gravely.”

Wisconsin Watch Managing Editor Dee J. Hall contributed to this story, which was reported in collaboration with The Guardian’s The Fight to Vote series. The nonprofit Wisconsin Watch (wisconsinwatch.org) collaborates with Wisconsin Public Radio, PBS Wisconsin, other news media and the UW-Madison School of Journalism and Mass Communication. All works created, published, posted or disseminated by Wisconsin Watch do not necessarily reflect the views or opinions of UW-Madison or any of its affiliates.

Receive a daily list of obituaries in your inbox