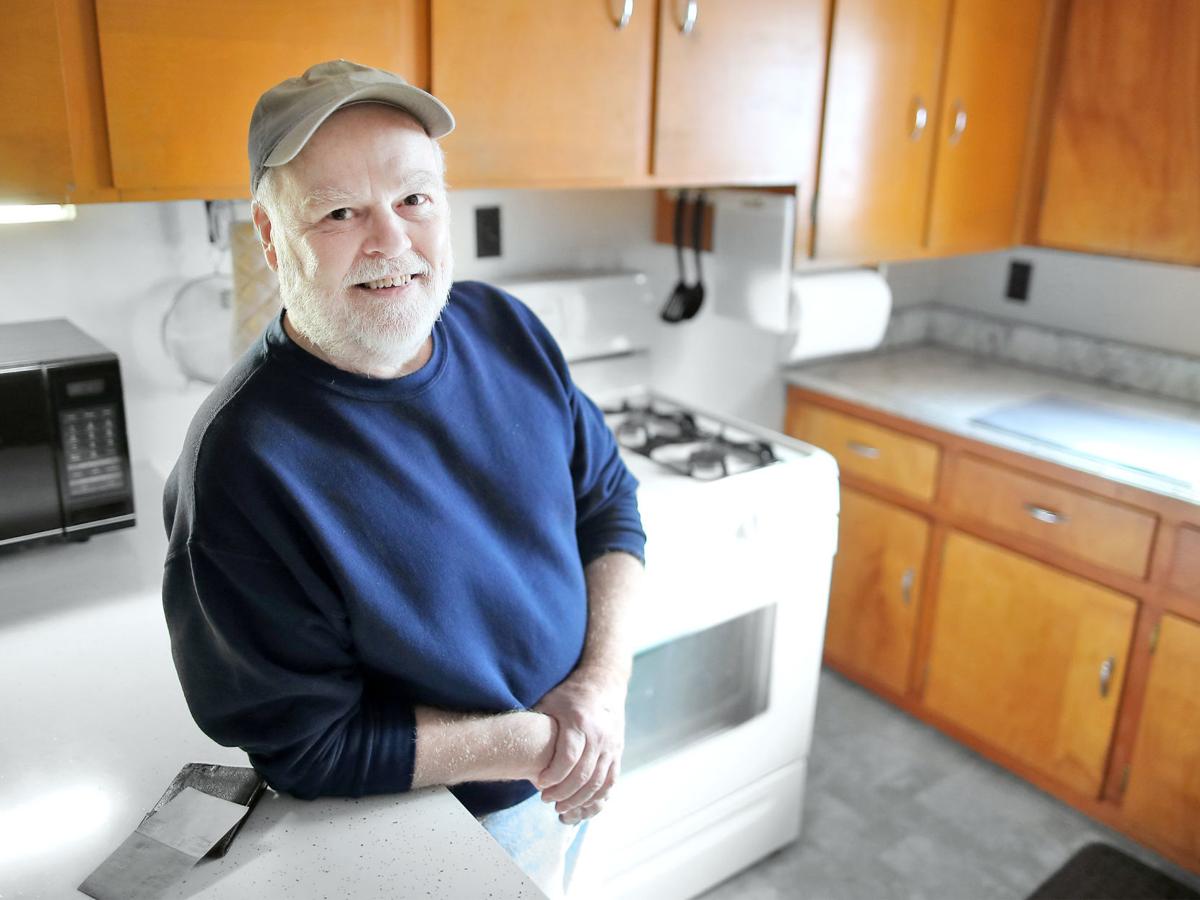 Carey Burkhard stands in his kitchen, where he recently found an old wallet containing $1,160. Burkhard chose to donate the money to the Good Samaritan Fund drive, sponsored by The Gazette, which once employed his mother, Pat Burkhard. 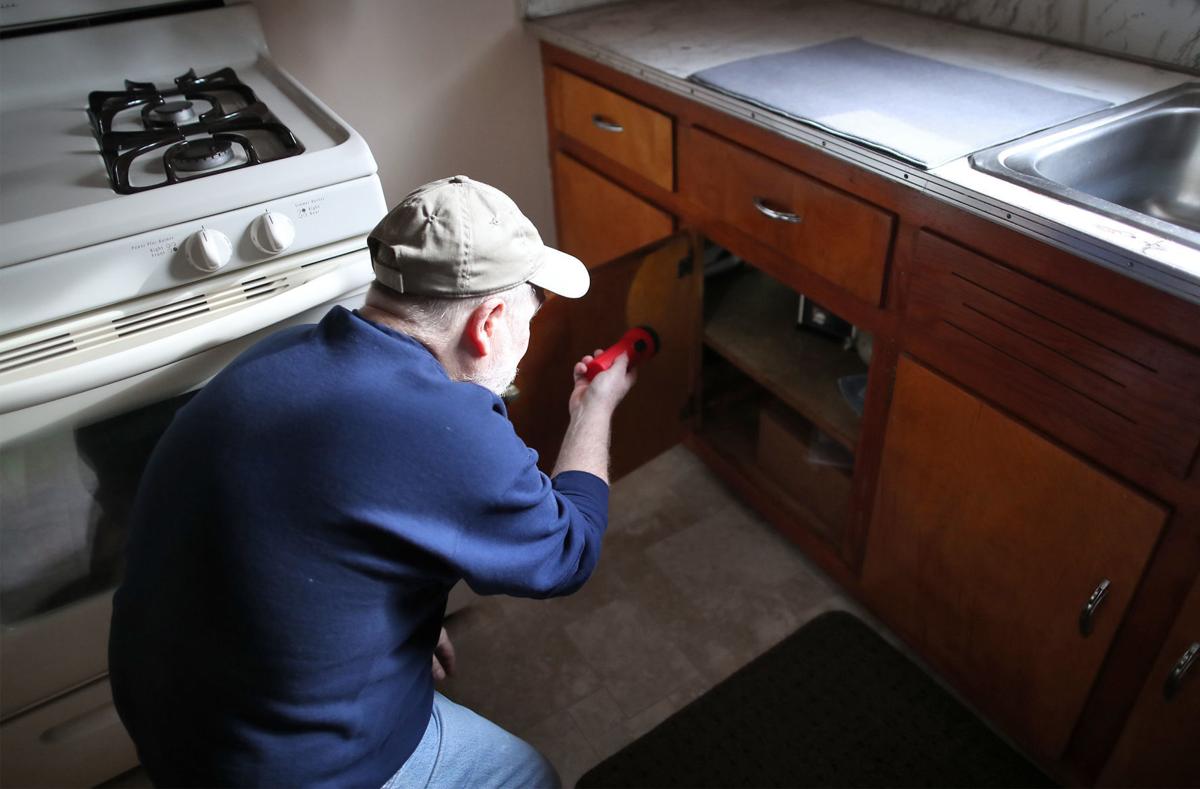 Carey Burkhard uses a flashlight to show the cabinet where he discovered a wallet with $1,160 in his Janesville house. 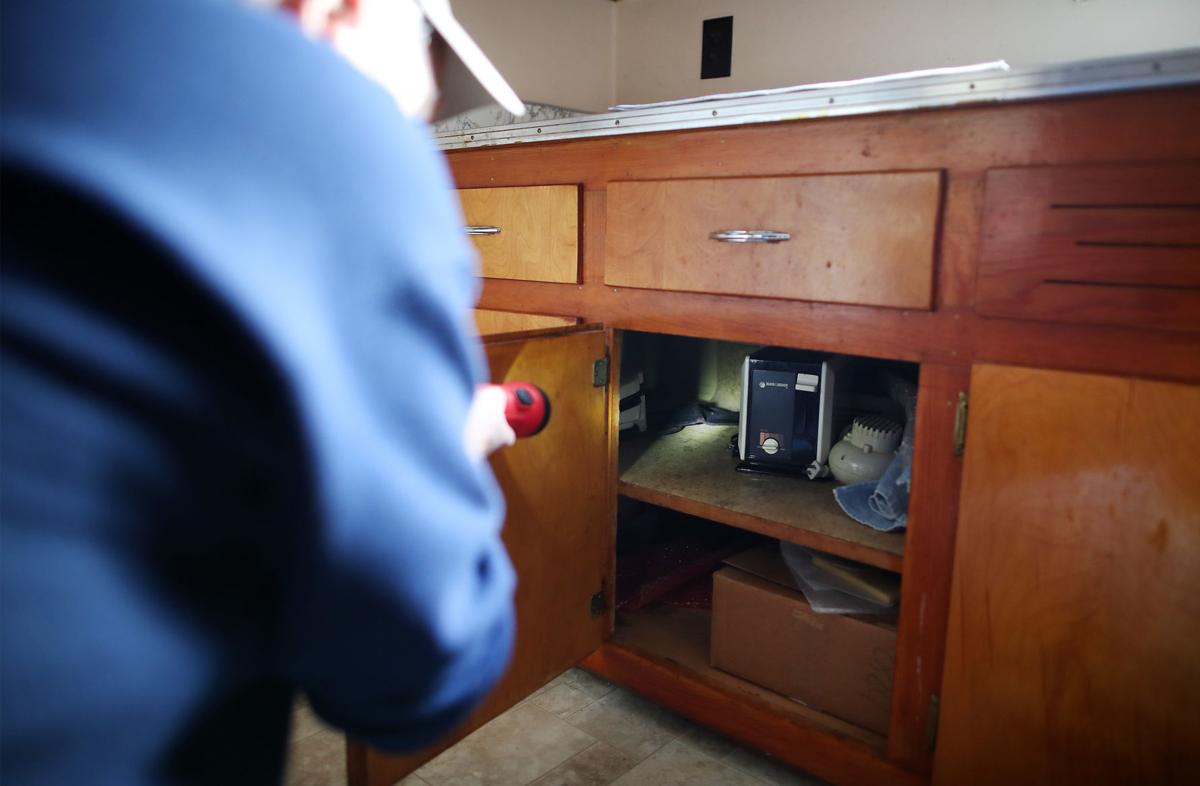 Carey Burkhard uses a flashlight to show the cabinet where he found a wallet that belonged to previous homeowner Kenneth Kinna, who died in 1973. Burkhard chose to donate the $1,160 in the wallet to the Good Samaritan Fund, a fundraising effort that gives food baskets to the needy during the holidays. The drive is sponsored by The Gazette, where Burkhard’s mother once worked, and radio stations WCLO and WJVL. 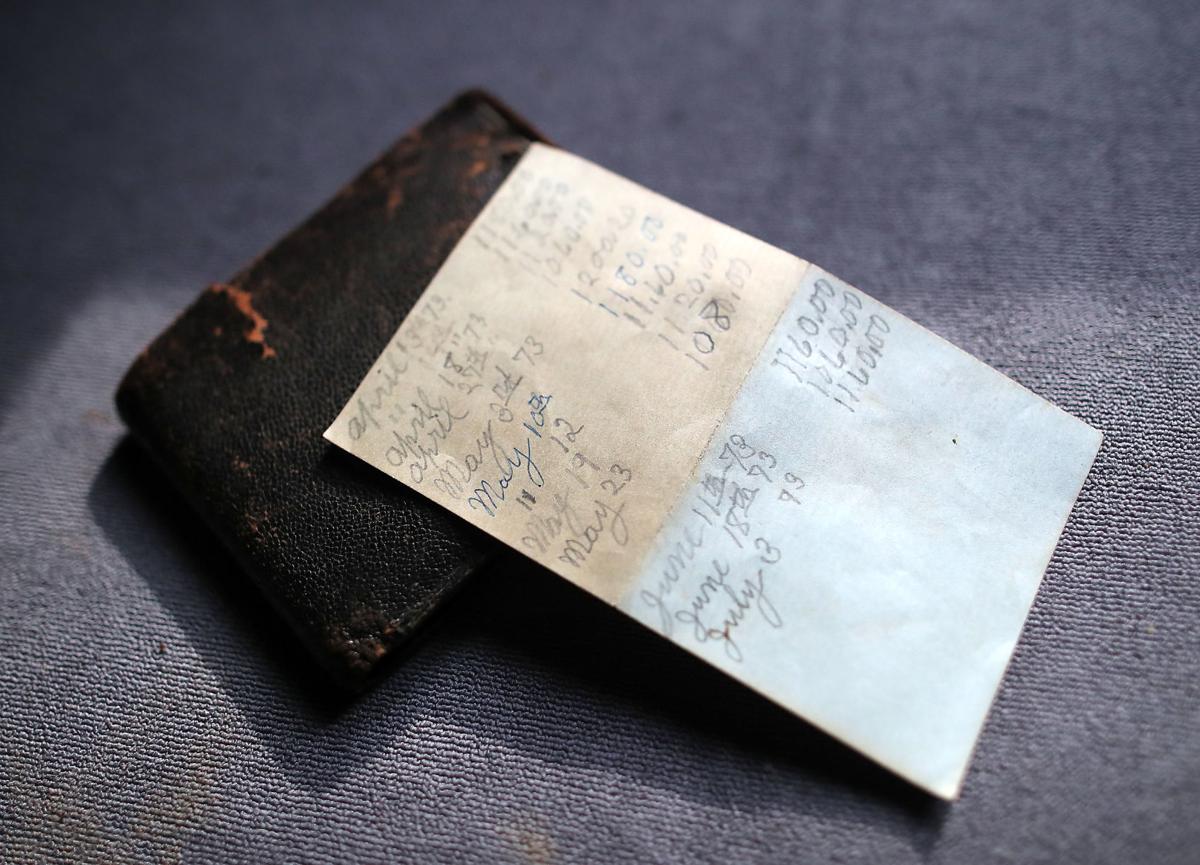 Carey Burkhard recently found a wallet containing $1,160 in the back of a cabinet near the kitchen sink at his Janesville home. The wallet belonged to previous homeowner Kenneth Kinna, who died in 1973. Burkhard donated the money to charity. Kinna’s descendants are delighted about the donation and hope to reclaim the empty wallet and deposit notes.

Kenneth Kinna was a careful man.

Born in 1897, he lived through the Depression and the collapse of the banks, two world wars and plenty of economic uncertainly. As the son of farmers and a farmer himself, he knew the value of saving.

Three days before his death on July 6, 1973, Kinna made his final addition to his special savings account, $100, bringing the total to $1,160. Then he returned the money and the receipt book to its hiding place at the back of a kitchen cupboard in his little house on Rockport Road.

More than 46 years later, the house’s current owner, Carey Burkhard, was looking for hand towels and found Kinna’s stash instead.

Don’t bother calling Burkhard to ask him for a loan or to buy a round of drinks. The money’s gone.

On Friday, Burkhard donated it to the Good Samaritan Fund. The charity, which provides food baskets to those in need, is sponsored by The Gazette, where Burkhard’s mother worked for many years.

Here’s how this happened:

About a month ago, Burkhard started thinking about weatherizing his house.

He usually hangs plastic sheeting over the windows. Once the plastic is on, he uses a hair dryer to remove the wrinkles and improve the view.

“I was thinking about the kitchen window over the sink,” Burkhard said. “I thought, ‘Oh, to hell with it. I’m getting older, and I’ll probably break my leg getting up on that sink. I’ll pay a little extra in heating this winter.’”

He thought he’d put some hand towels between the two panes of glass to reduce drafts.

The hand towels were in one of those awkward kitchen cupboards. You know the kind. They’re either too narrow to store anything, or wide enough but too deep, or they sort of go around a corner in a weird way.

“I’ve been keeping stuff in there I never used,” Burkhard said.

“You know, I had a Crock-Pot back there, and a George Foreman grill, and a toaster that I used maybe once a year.”

He knew he had a few hand towels in there. When he went hunting for them, he saw what looked like a little shadow in the back of the cupboard.

“I wasn’t going to put my hand back there. It might have been a mouse trap or a mouse,” Burkhard said

His flashlight revealed the object: a wallet.

“I thought, ‘That might be cool if it had a couple of dollars in it,’” Burkhard said. “You know, like a woman who finds an old purse in a closet and finds some money in it. There were 58 $20 bills in there. There was an address card in there, and it had an address on it, and I thought, ‘Wow, that’s my address.’”

Before you chastise Burkhard for not cleaning his cupboards, remember that he is the house’s fourth owner.

“My neighbor Bob, he’s lived next door for a long time, and he remembered all the people,” Burkhard said.

After Kinna died, his wife, Hazel, lived in the house until her death in 1977.

The house then was sold to a couple named the Wests. Then someone named Ruth bought it, but she moved to Fort Wayne, Indiana, during a General Motors shakeup in the mid-1980s. That’s when Burkhard bought it.

Burkhard knew from the beginning that he was going to donate the money.

One day when he was logging on to The Gazette’s website, the promotion for the Good Samaritan Fund popped up. It made him think of his mom, Pat Burkhard.

Pat Burkhard performed a variety of jobs at The Gazette, but she was known for being a skilled copy editor who could spot a misplaced comma or a style error from across the newsroom.

“I looked at the Good Samaritan Fund, and it was The Gazette, and it kind of felt like a sign from my ma,” Burkhard said. “Everything came together.”

He hopes his donation will encourage others to give—even if they find the money in their pocketbooks instead of their cupboards.

The Good Samaritan Fund is sponsored by The Gazette and radio stations WCLO and WJVL. Last year, residents contributed more than $12,450. The money is given to ECHO, the Janesville-based social services agency, and the Salvation Army so they can deliver food baskets to needy families during the holidays.

Donations may be sent to Good Samaritan Fund, care of The Gazette, P.O. Box 5001, Janesville, WI 53537-5001. Donations also may be dropped off at The Gazette offices at 1 S. Parker Drive, Janesville. All contributions are tax-deductible, as the fund is part of the Community Foundation of Southern Wisconsin.

A wallet found after 46 years leads to a big donation and fond memories for the Kinna family.