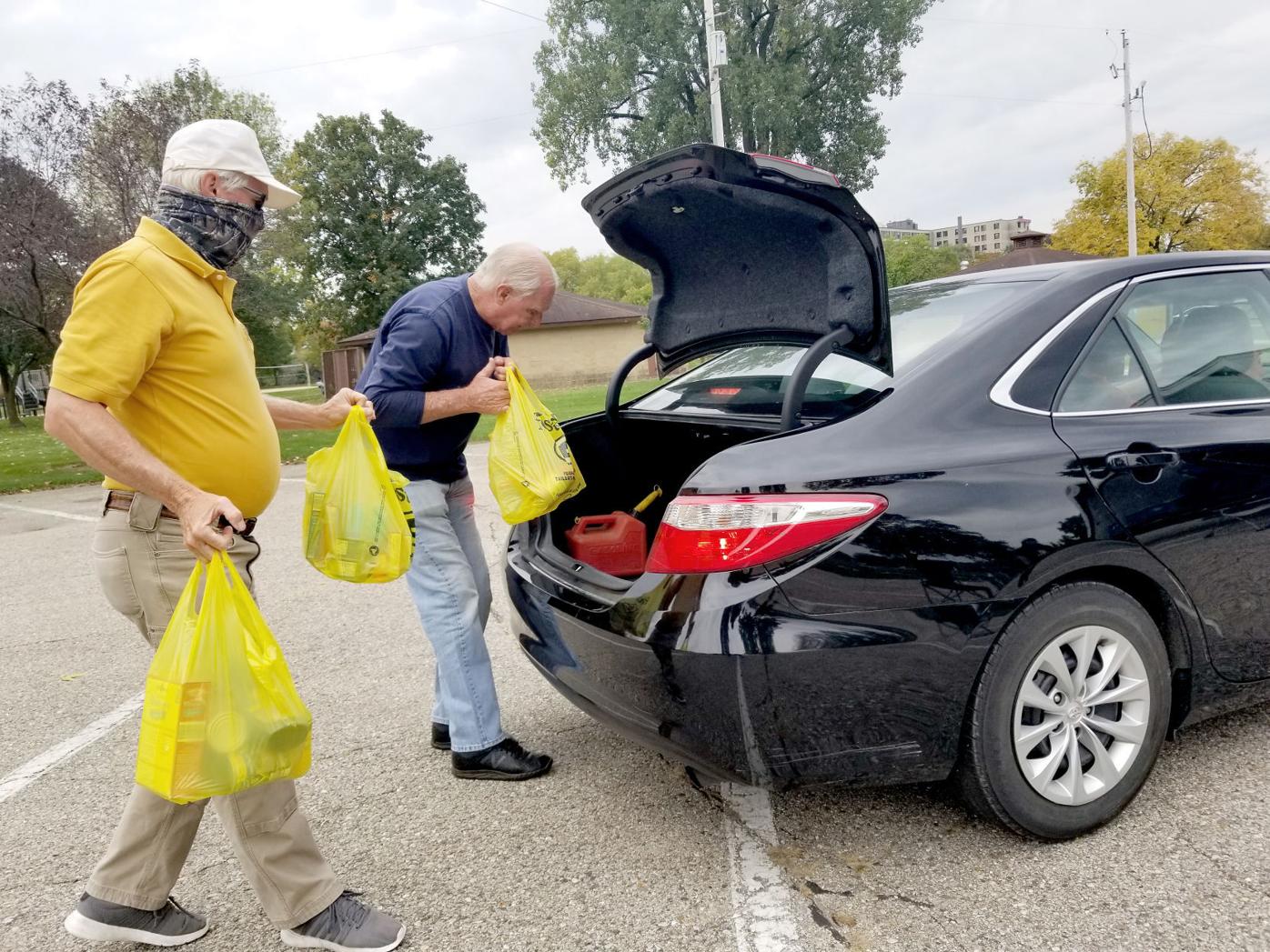 Volunteers Bob Fulton, left, and Mike Andre, right, unload donated groceries from the trunk of a woman’s car during a drive-thru food drive for ECHO in Janesville’s Traxler Park on Sunday morning. 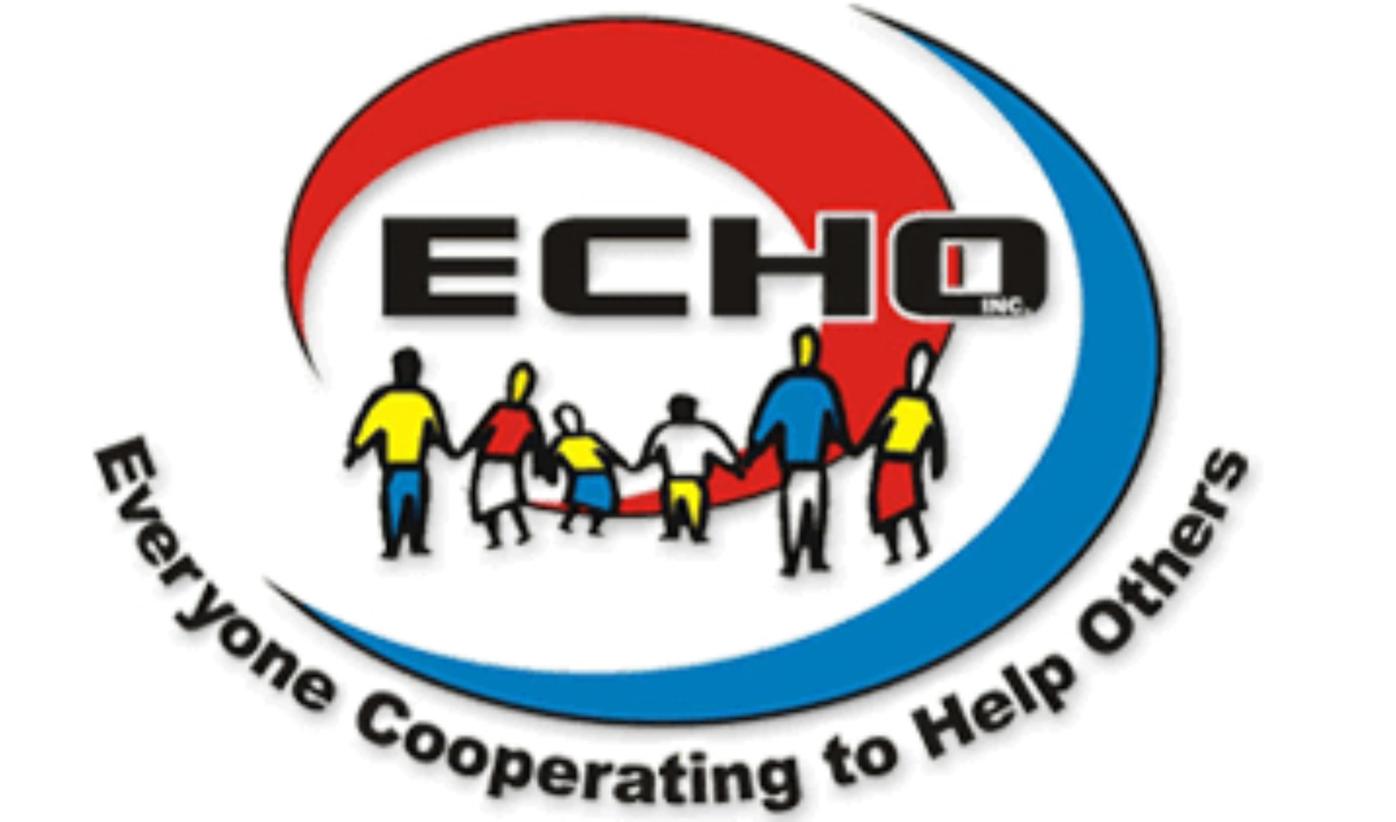 Volunteers Bob Fulton, left, and Mike Andre, right, unload donated groceries from the trunk of a woman’s car during a drive-thru food drive for ECHO in Janesville’s Traxler Park on Sunday morning.

A joint service club effort to boost a local food pantry’s reserves is in its second month at Traxler Park, and organizer Lisa Johnson said she’s getting past wondering if the idea was “harebrained.”

“I called it harebrained at first because I had no idea if it would work,” said Johnson, a Janesville Noon Kiwanis member. It’s the first time she can remember the eight local nonprofit service groups teaming up for such a drive.

And it’s a drive-up food drop-off, one that can be done in a city park, during COVID-19.

But COVID and the temporary shortfall in food donations that it has brought for Janesville social service nonprofit ECHO’s food pantry are why Johnson sought to team up multiple local clubs to help.

“We’re service groups. People start to remember that when there’s a need. So it’s been no real problem,” Johnson said.

The Janesville Joint Service Club Drive-Thru in two weekend drives last month and on Sunday has raised more than $4,000 in food and donations.

On Sunday, it was hard to tell at 10 a.m. what the four-hour collection would net, but individual items included plenty of pasta and fixings for spaghetti, soups, lots of paper towels and even a shrink-wrapped shank of smoked sausage.

Only one hiccup came during the drive.

That effort drew a crew of a half-dozen men who came to the drive Sunday and sat at a nearby picnic table, monitoring Johnson as she handed out voter registration reminders.

Johnson said the men initially asked if she came to Traxler Park to “harvest ballots.”

“I told them we’re just here to do a food drive and hand out voting fliers. I don’t even know how to go about ‘harvesting’ ballots. It sounds like a felony to me, though, so I probably won’t,” Johnson said.

Late in August, the Joint Service Club’s drive-thru had hosted the inaugural effort on a Saturday. ECHO’s pantry coordinator, Jessica Locher, said the group’s drive in late August hauled in about $1,000 in food and $2,000 in donations.

Locher said the effort helps because ECHO this summer had to cancel its major food drive, an event that typically fuels ECHO’s pantry with about $60,000 in food and in-kind donations. On top of that, a few federal food share programs launched during the early months of the pandemic have ended.

That has put more families back on the rolls of food pantries like ECHO, and the pressure is noticeable.

“These weekend drives are helping us provide enough through our pantry for people for a week. It’s a big help, especially right now,” Locher said, suggesting that the $3,000 or so in donations from the first drive has gone to full use.

It would continue to be welcome.

Locher said ECHO saw a big drop-off earlier this year of in-person food donations at its 65 S. High St. headquarters. ECHO is still open from 9 a.m. to 4 p.m. all week to collect food items. Donors, Locher said, can leave food donations on a marked cart that’s stationed at the front of the property.

To learn more visit the task force’s page at https://www.facebook.com/JanesvilleNoonKiwanis