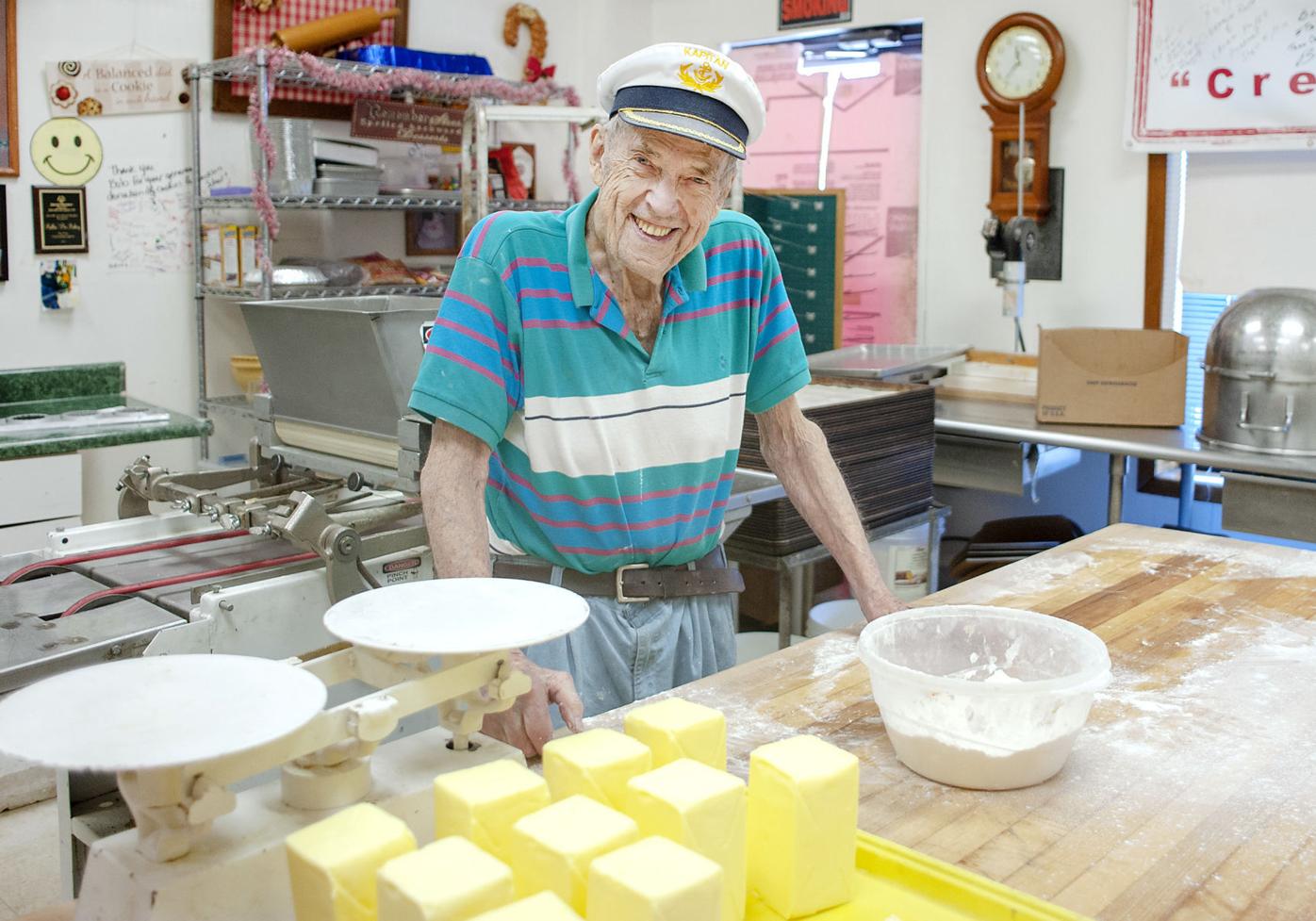 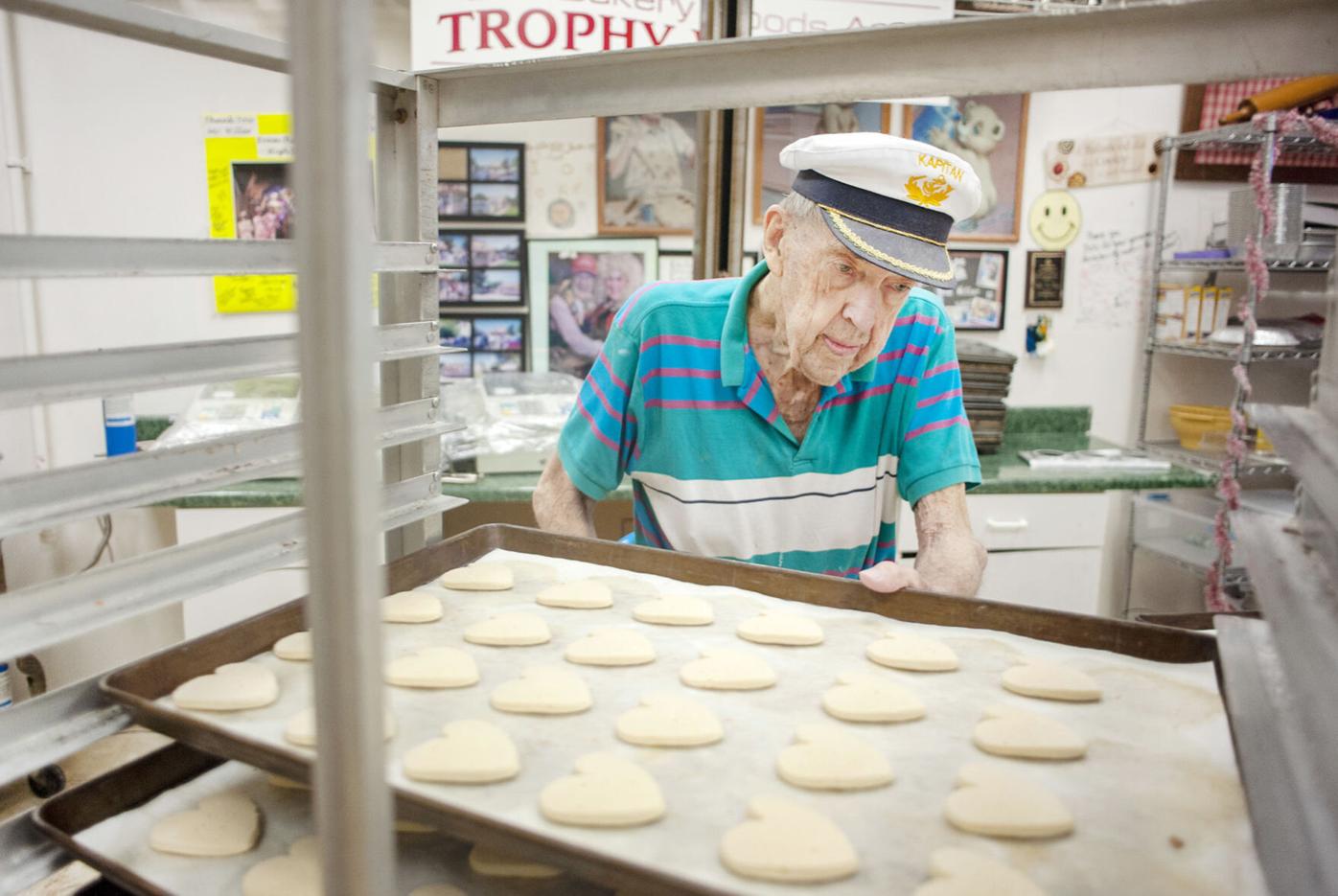 Rollin Pin Bakery owner Bob Hiller works inside his Janesville bakery in January 2019. Hiller is too ill to operate the bakery, so the family has closed it and liquidated the assets. 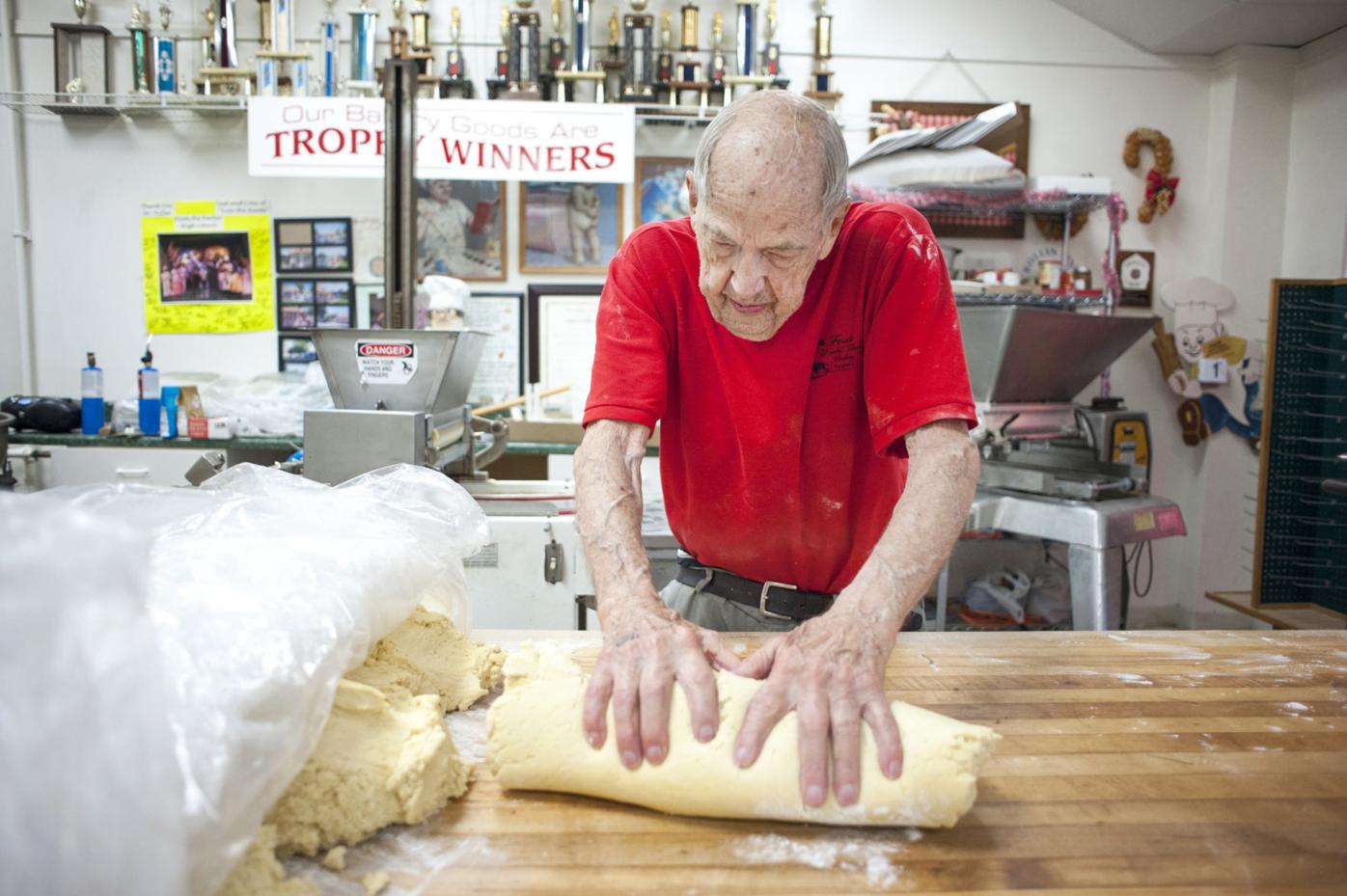 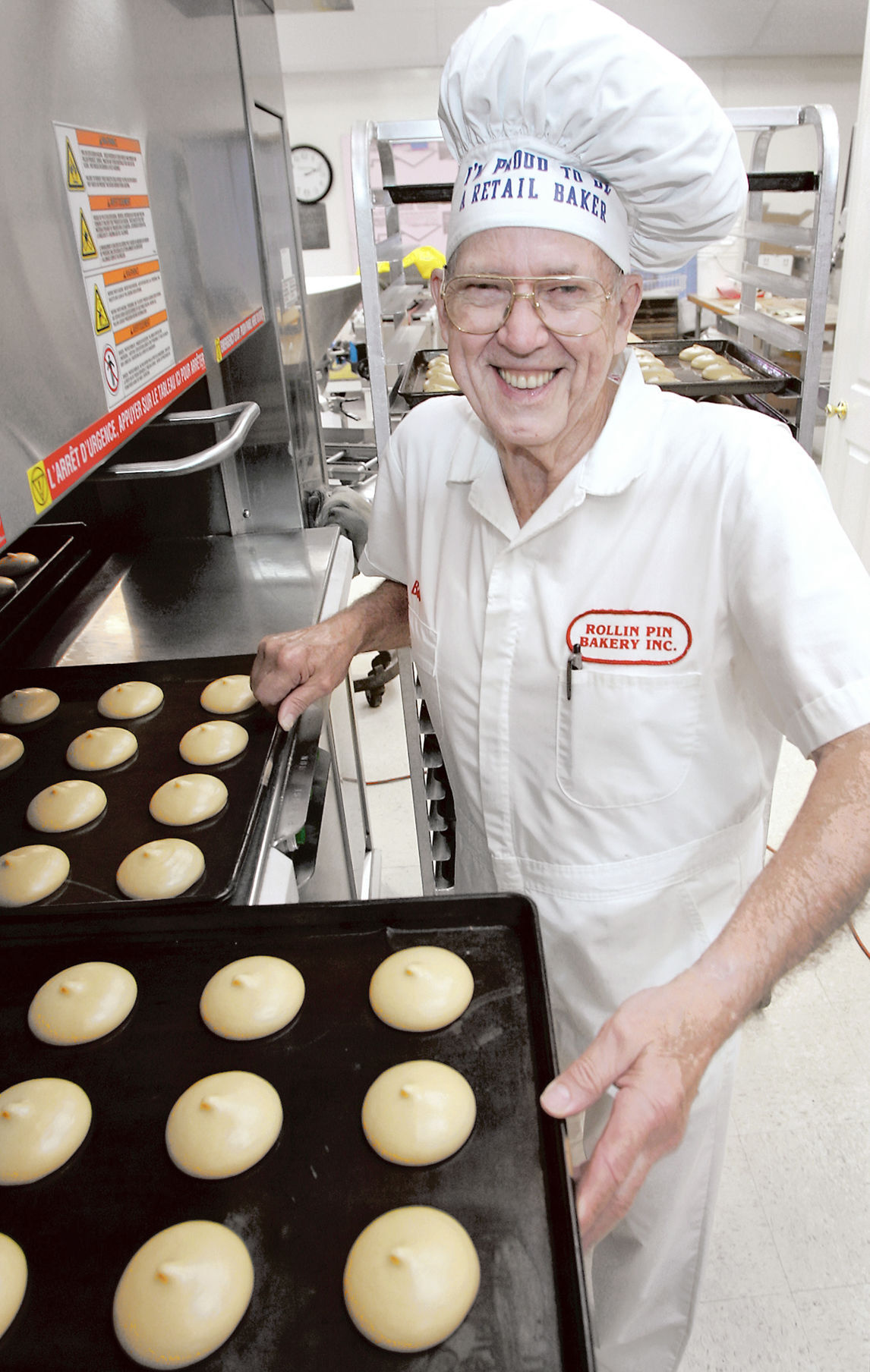 Bob Hiller makes a batch of 740 cream puffs at his Janesville bakery in August 2006. 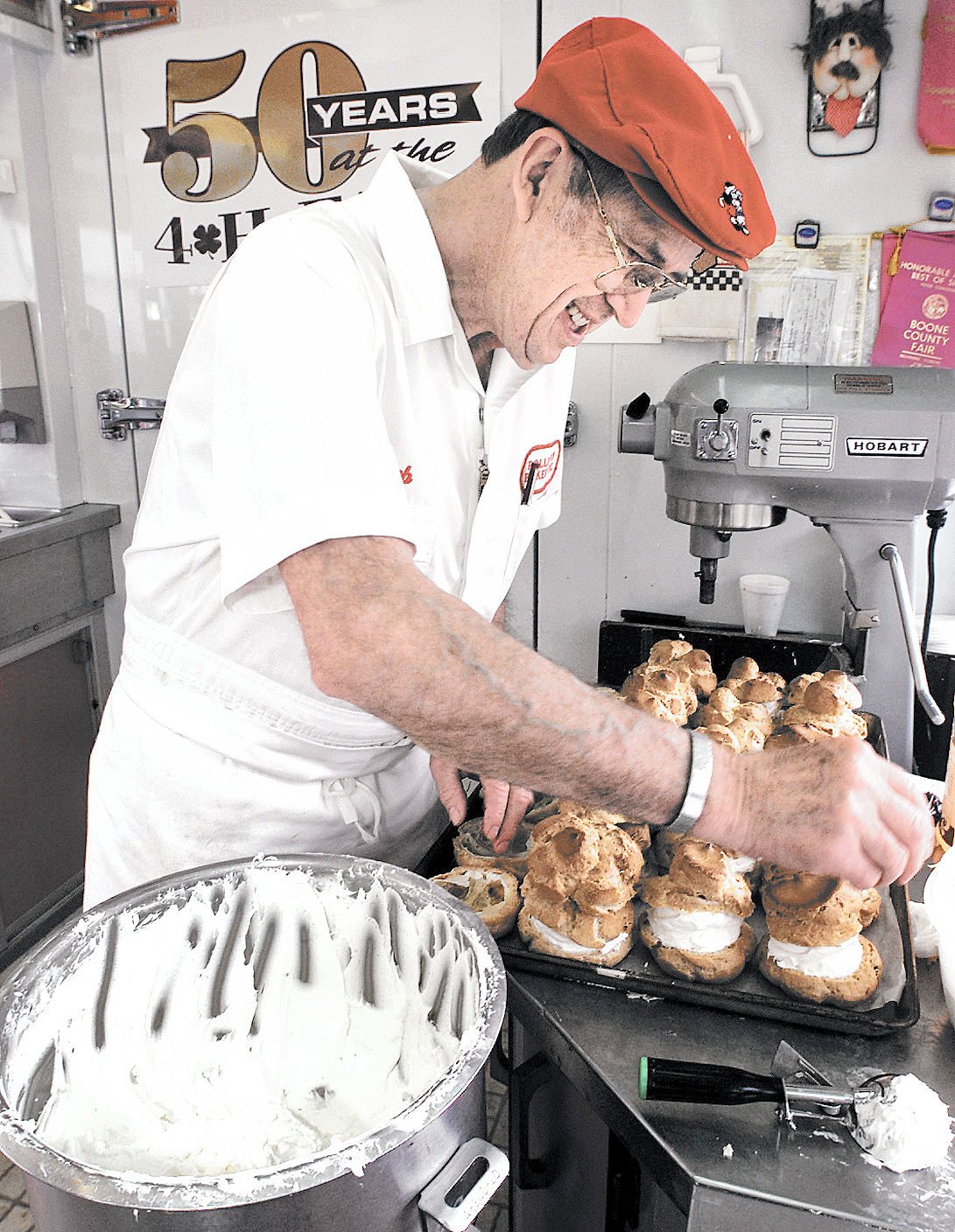 Bob Hiller, owner of Rollin Pin Bakery, makes a batch of cream puffs at the Rock County 4-H Fair in 2000. 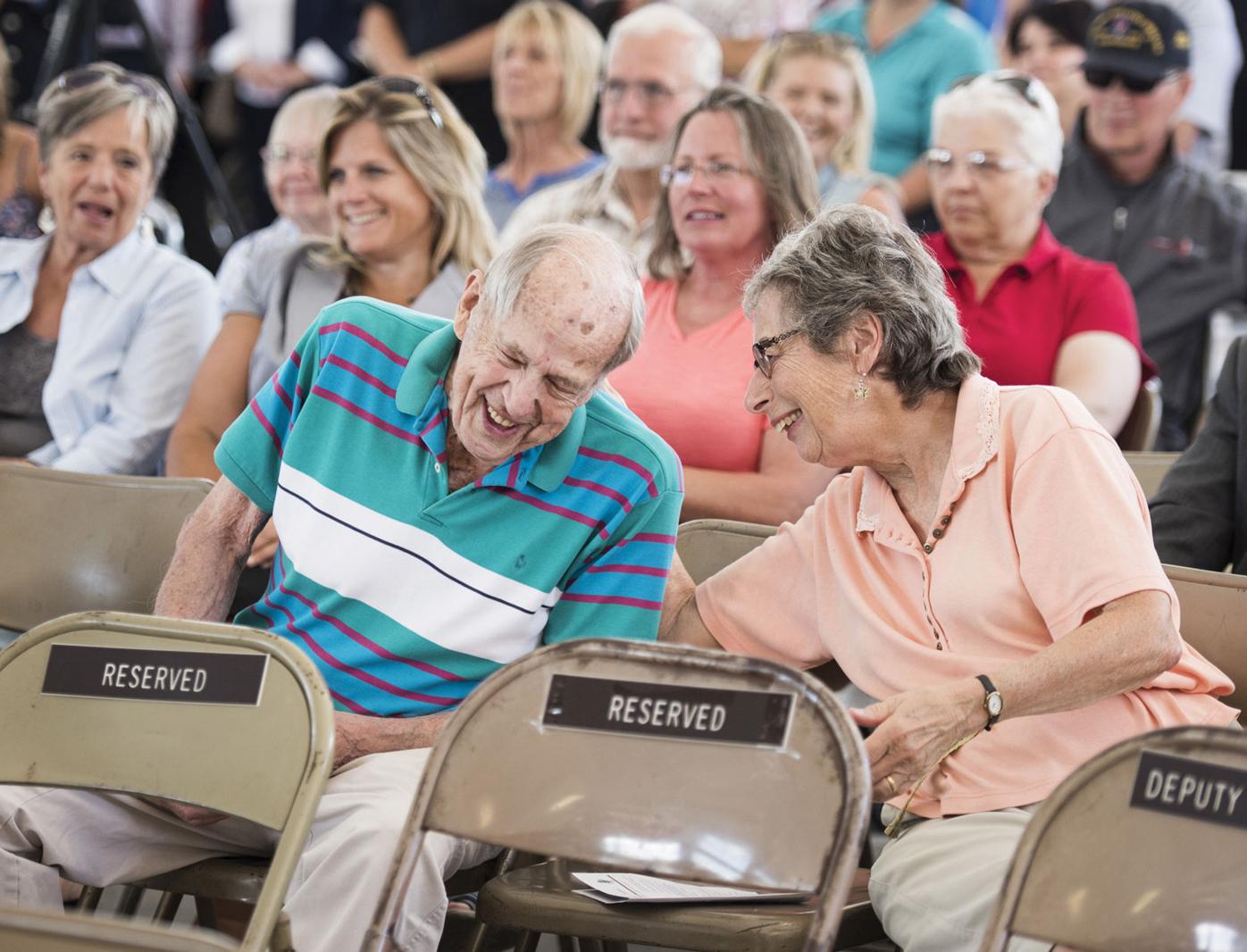 Bob Hiller, 86, laughs with Janesville City Council member Kay Deupree after his impromptu speech of appreciation for the Janesville Fire Department on June 2, 2016, at the Central Fire Station in Janesville.

Rollin Pin Bakery owner Bob Hiller works inside his Janesville bakery in January 2019. Hiller is too ill to operate the bakery, so the family has closed it and liquidated the assets.

Bob Hiller makes a batch of 740 cream puffs at his Janesville bakery in August 2006.

Bob Hiller, owner of Rollin Pin Bakery, makes a batch of cream puffs at the Rock County 4-H Fair in 2000.

Bob Hiller, 86, laughs with Janesville City Council member Kay Deupree after his impromptu speech of appreciation for the Janesville Fire Department on June 2, 2016, at the Central Fire Station in Janesville.

Years ago, on one of Bob Hiller’s days off, a friend pulled a prank using Hiller’s well-known Rollin Pin Bakery mobile food truck.

In a good-natured ruse, the friend stuck a “Now Open” sign on the street corner next to the food truck, which was parked outside Hiller’s home on Janesville’s east side.

Hiller hadn’t made any baked goods, and Rollin Pin was not open for business that day. But the joke fooled so many of Rollin Pin’s fans that within minutes, a queue of about 50 cars had lined up along the street.

“It was just people who happened to be driving past and saw that fake ‘Now Open’ sign. But it was a whole mess of people who showed up right away. So that’s how you really know what Rollin Pin has meant to people around here,” said Hiller’s son, Bobby Hiller II.

As of this week, Rollin Pin Bakery is no more. The ever-joking Hiller, 91, has grown too ill with heart disease in recent months to carry on with his work, his family said. The longtime business is closed and is being liquidated.

Rollin Pin sold off the company’s baking equipment at auction Wednesday. The bakery’s most recent storefront and production facility off Case Drive on the east side is closed.

It marks the end of a long-running and locally beloved foodie mainstay that Hiller ran with his family for six decades. And with it go Hiller’s famous chocolate chip and peanut butter cookies, eclairs, and cream puffs, his family said.

At one time, Hiller and his family cranked out batches of 50,000 cookies and 3,000 eclairs at a time—most recently during special post-holiday sales that Rollin Pin hosted just five days a year.

It has been years since Rollin Pin has occupied its first storefront, which opened in 1961 on Arch Street and operated for more than 50 years.

In recent years, Hiller had been semi-retired but continued selling batches of cookies that his son said were always hand-rolled and hand-cut, made from recipes known only by the family.

Hiller was at his east-side home Thursday but said he felt too ill to give an interview.

As the pandemic unfolded, the family decided it was too difficult to run the popular post-holiday sales, which often drew overflow crowds of customers who had waited two months between batches of Rollin Pin cookies and other baked goods.

“With public health rules, you couldn’t really have more than a handful of customers in at a time,” Bobby Hiller said. “With our special sales, we’d do 1,000 people a day easily. It was a no-win situation to have to manage production with those kind of crowds coming in during this virus, so we kind of had to cut our losses.”

Over the last year, Hiller’s health has deteriorated as his heart disease has worsened, his son said.

Hiller, whose 92nd birthday is in mid-March, has been a baker by trade since he was a teenager in the World War II era.

Bobby Hiller said his father dropped out of high school when he had to choose between serving an after-school detention and being on time to his job at Cunningham’s, a bakery on Milwaukee Street in Janesville.

“He just followed what he figured he wanted to do,” Bobby Hiller said.

Hiller bought his first bakery when he was 15, his son said. He had just sold the first car he had bought, and he rode a bicycle from his Janesville home to Milton, where he heard a bakery was up for sale.

The proceeds from selling his car bought the teenage Hiller the Milton bakery, along with a van for deliveries.

“He sold a vehicle and bought a new bakery business, plus another vehicle on top of that. That’s business,” Bobby Hiller said.

Generations of Janesville residents came to know Rollin Pin’s specialties—the cookies and eclairs especially—during local fairs and festivals that Hiller would ply with his food truck.

In a 2019 interview with Gazette kicks Editor Greg Little, a then-89-year-old Bob Hiller said he was amazed that he had continued to cultivate a strong customer base through social media, even as his business shifted from a daily bakery to one that ran a handful of days a year.

During the interview, Hiller said he named his bakery Rollin Pin for reasons that are, and always were, self-evident.

“It’s just named after the rolling pin. We were using them all the time, so it just came to me,” Hiller said.

Edmund Halabi, who owns and operates the Italian House restaurant in Janesville, said he considers Rollin Pin Bakery in the same league as other iconic Janesville businesses, including General Motors and Parker Pen.

In the same way, Halabi said he always considered Hiller a local icon who understood how to cultivate a devoted local following.

“What he has brought has always been a taste of a time and place,” Halabi said. “Something from this town. Freshness, handmade, homemade simplicity.

“He understood that you really don’t have to grow east or west, north or south. You don’t have to be a McDonald’s type of business. You can do it totally right, and do it right here.”