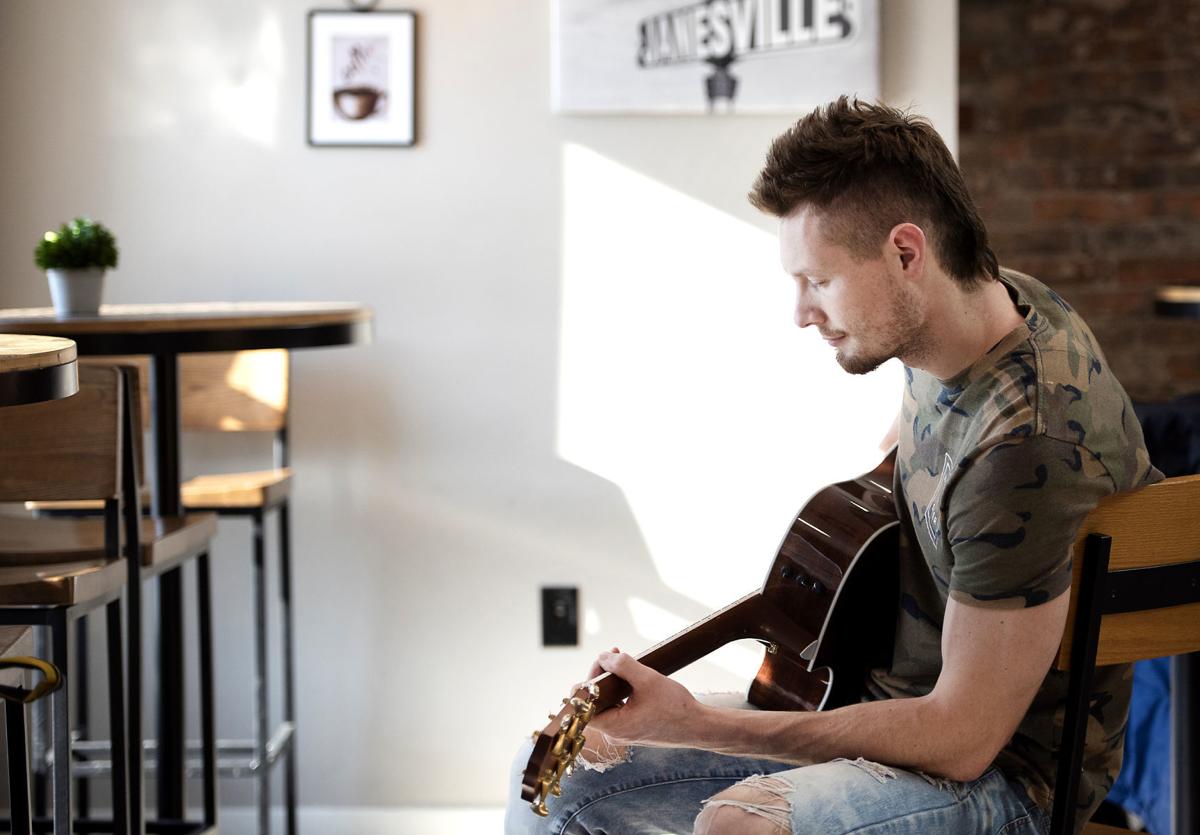 Light shines on Zac Matthews as he strums a guitar for a portrait at The Bodacious Brew in downtown Janesville. Matthews, a Janesville-area native singer and guitarist, recently performed in front of the panel of celebrity judges for the upcoming season of "American Idol." The ABC network talent show's new season debuts Sunday night. 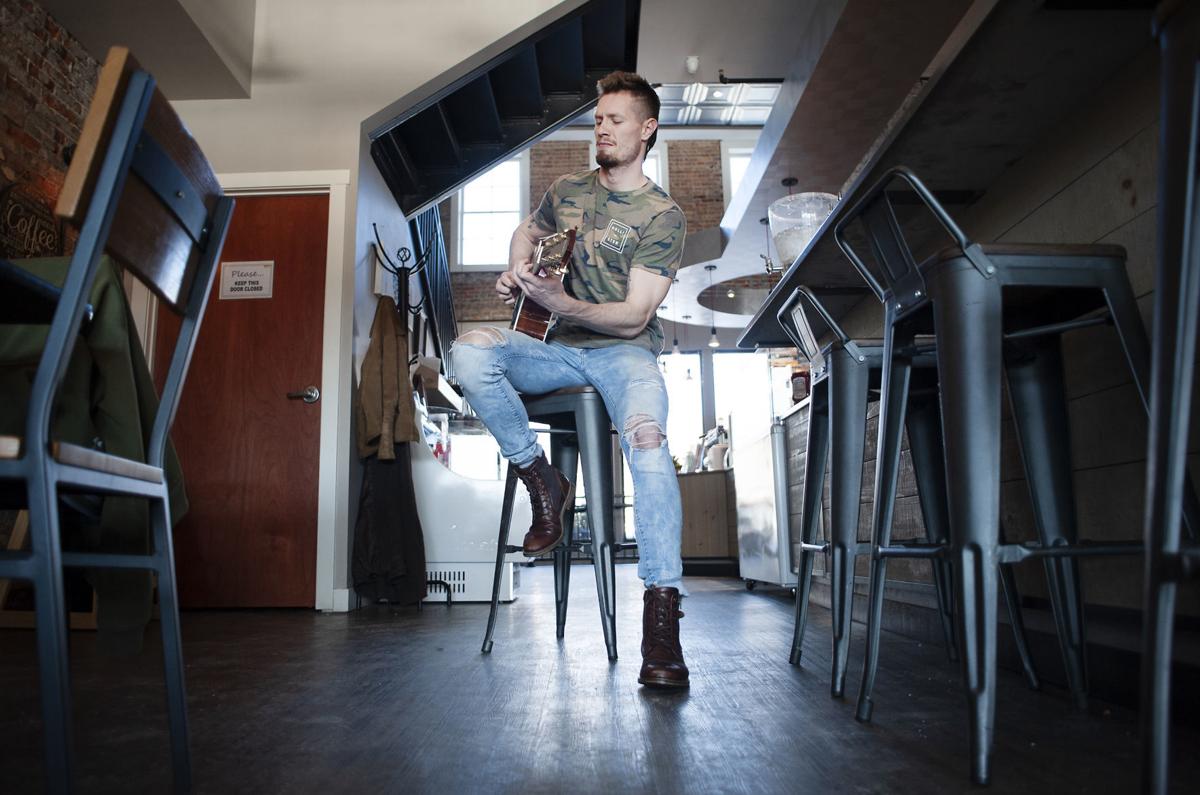 Light shines on Zac Matthews as he strums a guitar for a portrait at The Bodacious Brew in downtown Janesville. Matthews, a Janesville-area native singer and guitarist, recently performed in front of the panel of celebrity judges for the upcoming season of “American Idol.” The ABC network talent show’s new season debuts Sunday night. 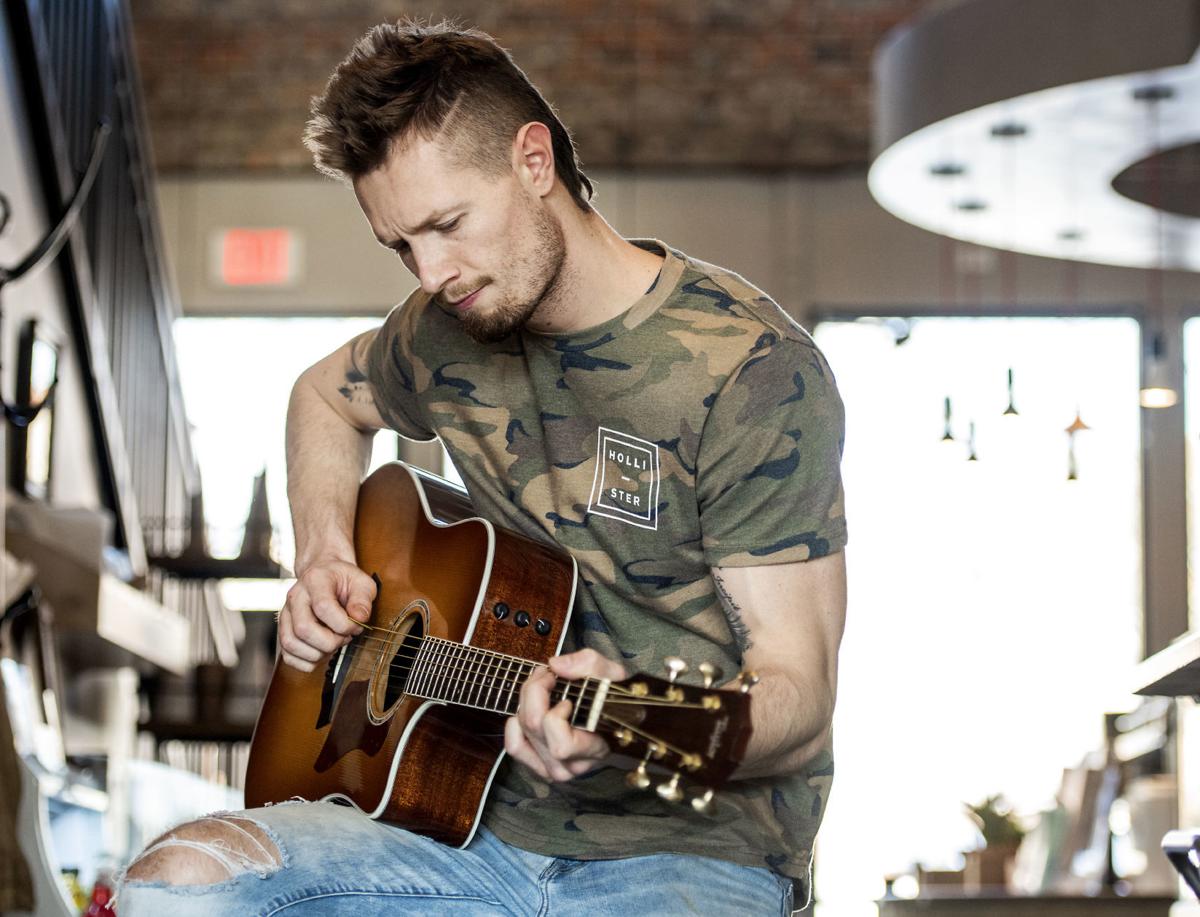 Light shines on Zac Matthews as he strums a guitar for a portrait at The Bodacious Brew in downtown Janesville. Matthews, a Janesville-area native singer and guitarist, recently performed in front of the panel of celebrity judges for the upcoming season of “American Idol.” The ABC network talent show’s new season debuts Sunday night.

Country music performer and Janesville native Zac Matthews could appear on national television as early as this weekend on the new season of ABC’s “American Idol.”

In an interview with The Gazette, singer-guitarist Matthews said he and his family waited long hours and endured several lengthy, taped background interviews with producers and “Idol” host Ryan Seacrest at a tryout in early October.

It was after 9 p.m.—after an around-the-clock wait—when Matthews took the stage on the show’s performance set at the Milwaukee Art Museum.

When he finished, the panel was noncommittal, quiet. They asked Matthews to try another song, perhaps a cover of a well-known standard—somebody else’s hit.

Matthews said he pulled out a cover of Johnny Cash’s “Folsom Prison Blues” and sang while he accompanied the song on finger-picked guitar.

“It was the best I ever played that song on the guitar,” Matthews, 24, recalled. He said the room that held the “Idol” sound stage seemed to bounce his music straight back at him.

“I felt like I was in a TV cube. I was sick to my stomach, really. It was the biggest thing I’ve ever done in my life so far,” he said. “Like, that’s how it feels the moment when you learn right in front of you how your future maybe will turn out.”

After Matthews’ Cash cover, Richie voted to bring Matthews aboard and put him among the select few to compete on “American Idol.” But Perry and Bryan said “no.” The judges told him he didn’t seem ready for Hollywood.

It meant Matthews wouldn’t advance beyond the initial tapings of “American Idol” in cities where the show’s producers and judges vet regional performers in the first step of assembling the show’s full cast of contestants.

Matthews said the judges thought his performances felt “a little forced.” Bryan advised Matthews to pack his guitar and head straight for Nashville, Tennessee, the nation’s country music capital. It’s a city where Matthews already has traveled to record music in the studio and it’s where Matthews wants to move permanently.

Over the last seven years of writing, playing and performing country music, Matthews has had other brushes with music stardom.

He was first runner-up in the 2014 Colgate Country Showdown, a nationally known country music talent search. Matthews’ rise in that contest put him and his Fender Telecaster guitar on stage at the hallowed Grand Ole Opry in Nashville, where at age 17, he met country star LeAnn Rimes.

The Opry performance was Matthews’ first flirtation with mainstream American country music acclaim, and it came when Matthews was still a teen. He took the stage at “American Idol” in October knowing he might end up in front of an international network TV audience, this time vying for a shot at worldwide pop music stardom.

“My girlfriend, Juli, signed me up,” Matthews said. “She called me during her lunch break at work to tell me.”

By October, Matthews already had made the first cut for “Idol” a month earlier out of a field of about “10,000” hopefuls in Chicago. Later, in Milwaukee, he was among 50 artists, mostly from the Midwest, being screened for a chance to become full-season contestants.

Matthews is unsure when his taped audition will air, but he believes it might be shown in one of the first episodes of the new season—episodes in which “American Idol” features performers who make the cut for the show’s season-long competition, along with others who nearly got there. Season 18 premieres at 7 p.m. Sunday.

For Matthews, the fleeting stint on “Idol” was “one of the biggest learning experiences of my life and one of the few things I’m most grateful and blessed to have experienced.”

Matthews said he learned how to take professional criticism to heart. His biggest feedback was from Richie, who told Matthews to keep working hard on his most “positive” elements. To Matthews, that means he needs to work harder on his singing.

As early as age 17, Matthews’ finger-picked guitar playing drew compliments from seasoned local musicians, one of whom described Matthews’ talent as a guitarist as a “High school baseball player with a 100-mile-per-hour fastball.”

With his “Idol” audition out of the way, Matthews will keep playing with his Rock County-based Zac Matthews Band, a three-piece country outfit that also consists of brothers Zac and Brandon Johns.

Matthews said he’ll “probably” move to Nashville at some point to chase country music fame. But he’s unlikely to go there without his band.

“They’re as close to brothers to me as anybody I have in my life,” he said.

And while his “American Idol” experience didn’t end as he had hoped, Matthews said he doesn’t regret the outcome.

“There’s a lot of talent in the world, but I don’t believe in luck. It’s work and who you are a person, whether you love what you do because what you do is real,” Matthews said.

“So I don’t regret auditioning for ‘Idol’ with my own music, an original song I wrote. Even though I know I might only get one real shot ever, I want to do it on my own two feet. Win or lose, I think it’s the most important always to be just me, just who I am.”