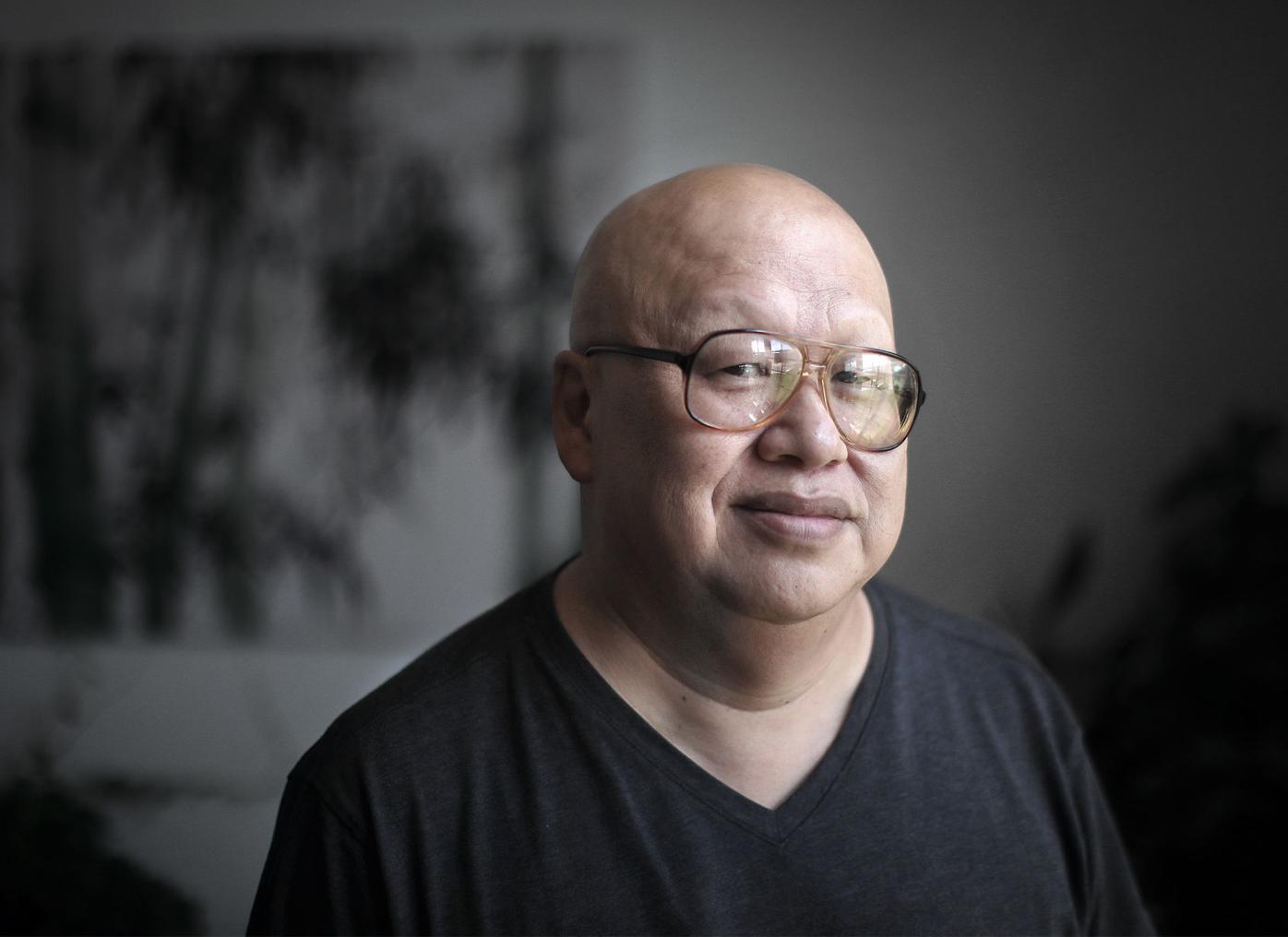 Tom Fong, owner of the Cozy Inn restaurant in Janesville, is the son of Fang Lang, known later in life as Wing Sun Fong, one of six Chinese survivors of the sinking of the Titanic in 1912. Although Fong knew his father survived a shipwreck, his father never told him it was the Titanic. 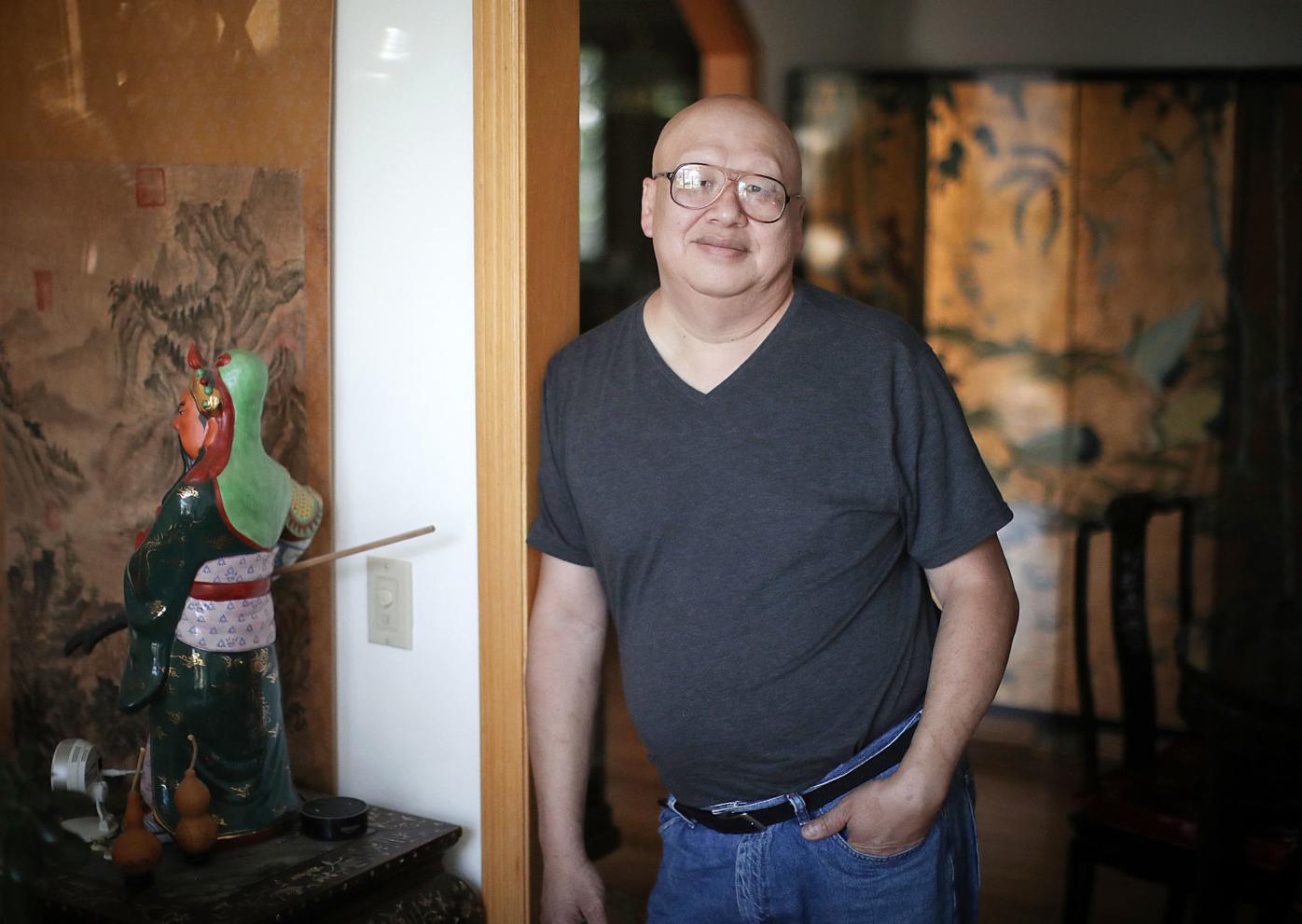 Tom Fong stands for a portrait inside his Janesville home. 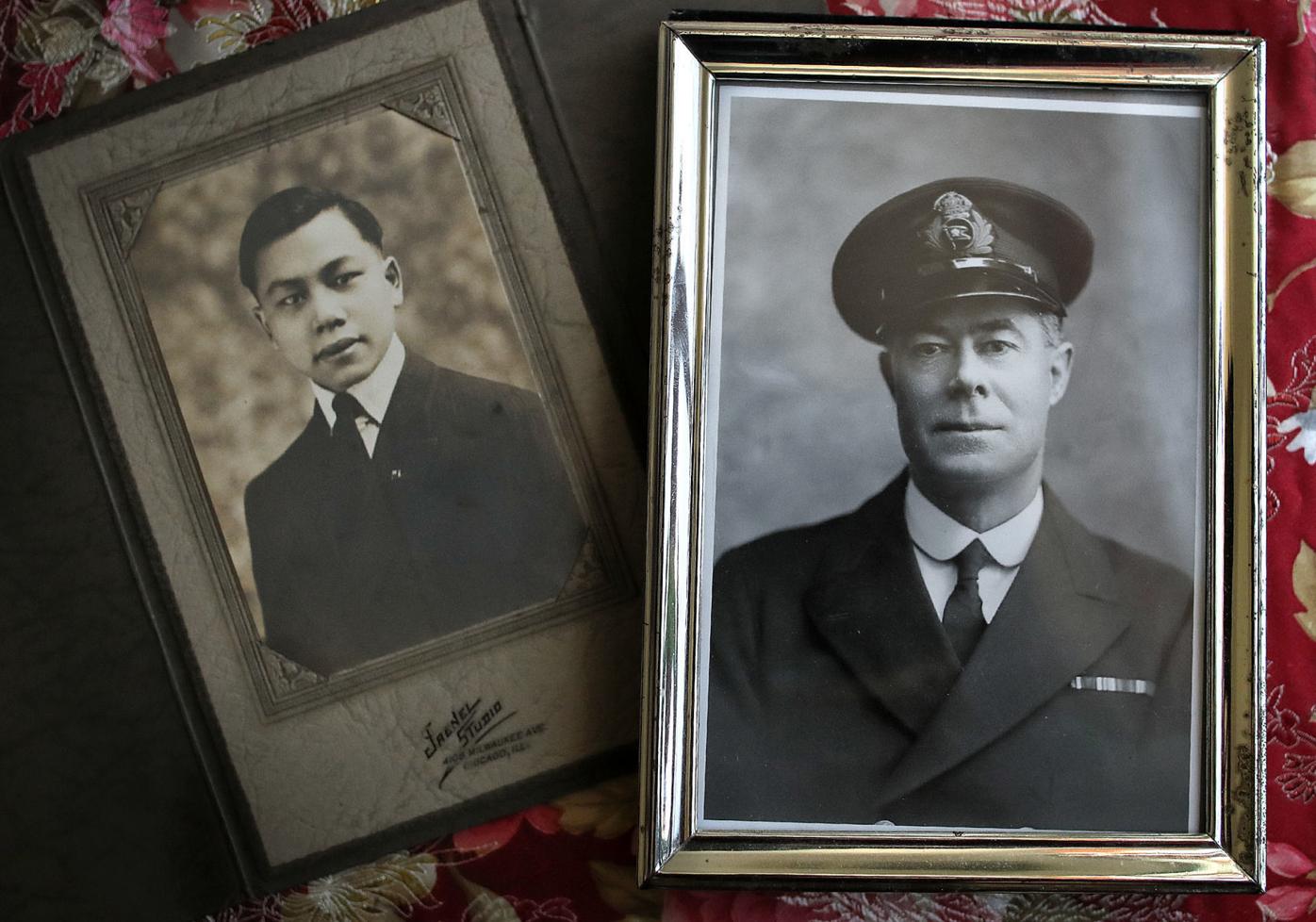 Tom Fong’s father Fang Lang, left, known later in life in the U.S. as Wing Sun Fong, was one of six Chinese nationals who survived the Titanic sinking in 1912. Fifth Officer Harold Lowe, right, captained the lone lifeboat that returned and discovered Fang Lang floating on a piece of wreckage in the frigid waters of the North Atlantic Ocean. 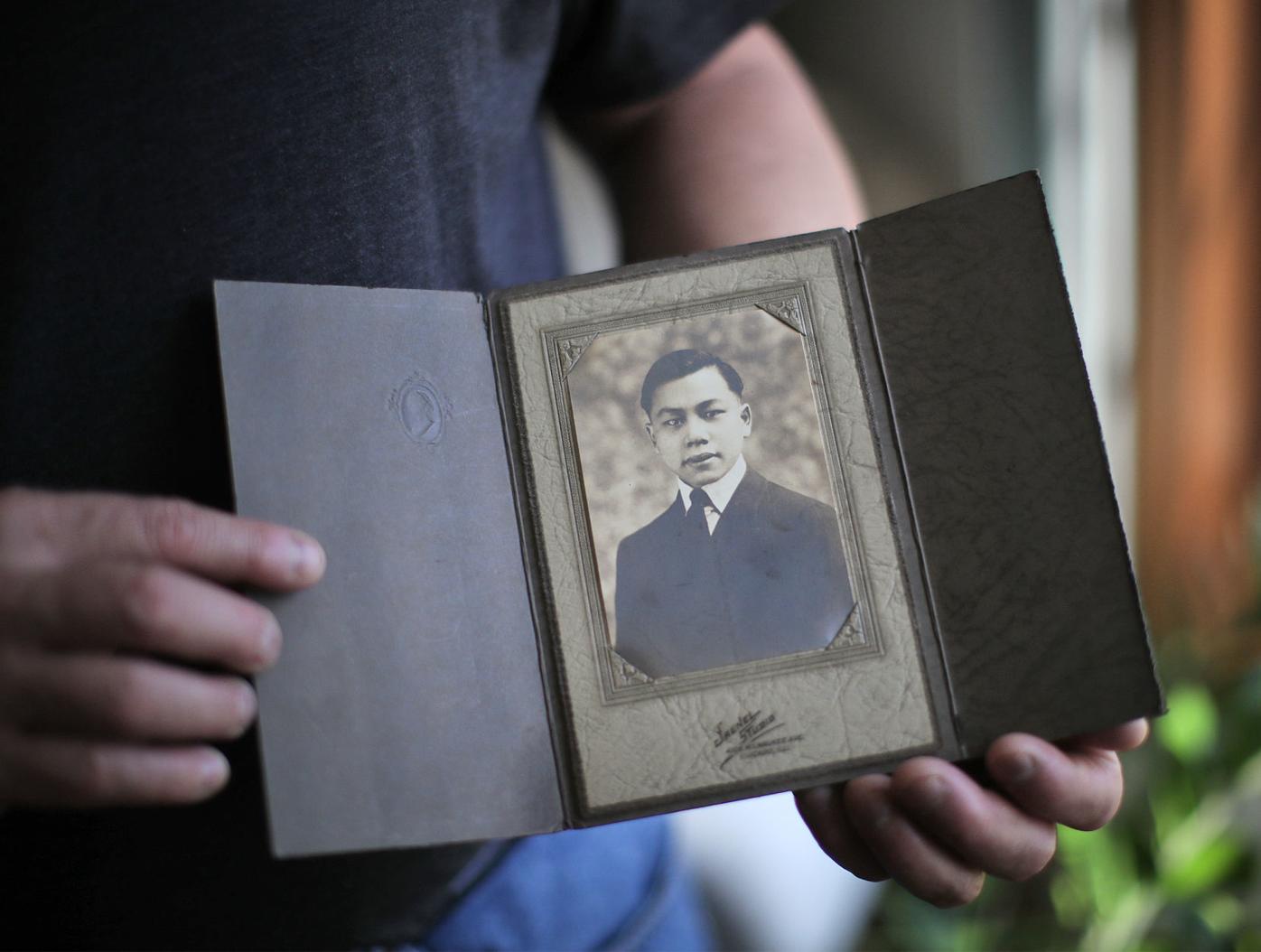 Janesville resident Tom Fong holds a photo of his father, Fang Lang, known later in life as Wing Sun Fong, who was one of six Chinese survivors rescued after the Titanic sank in 1912. A forthcoming documentary, “The Six,” tells the story of Fang Lang and the five other Chinese Titanic survivors. 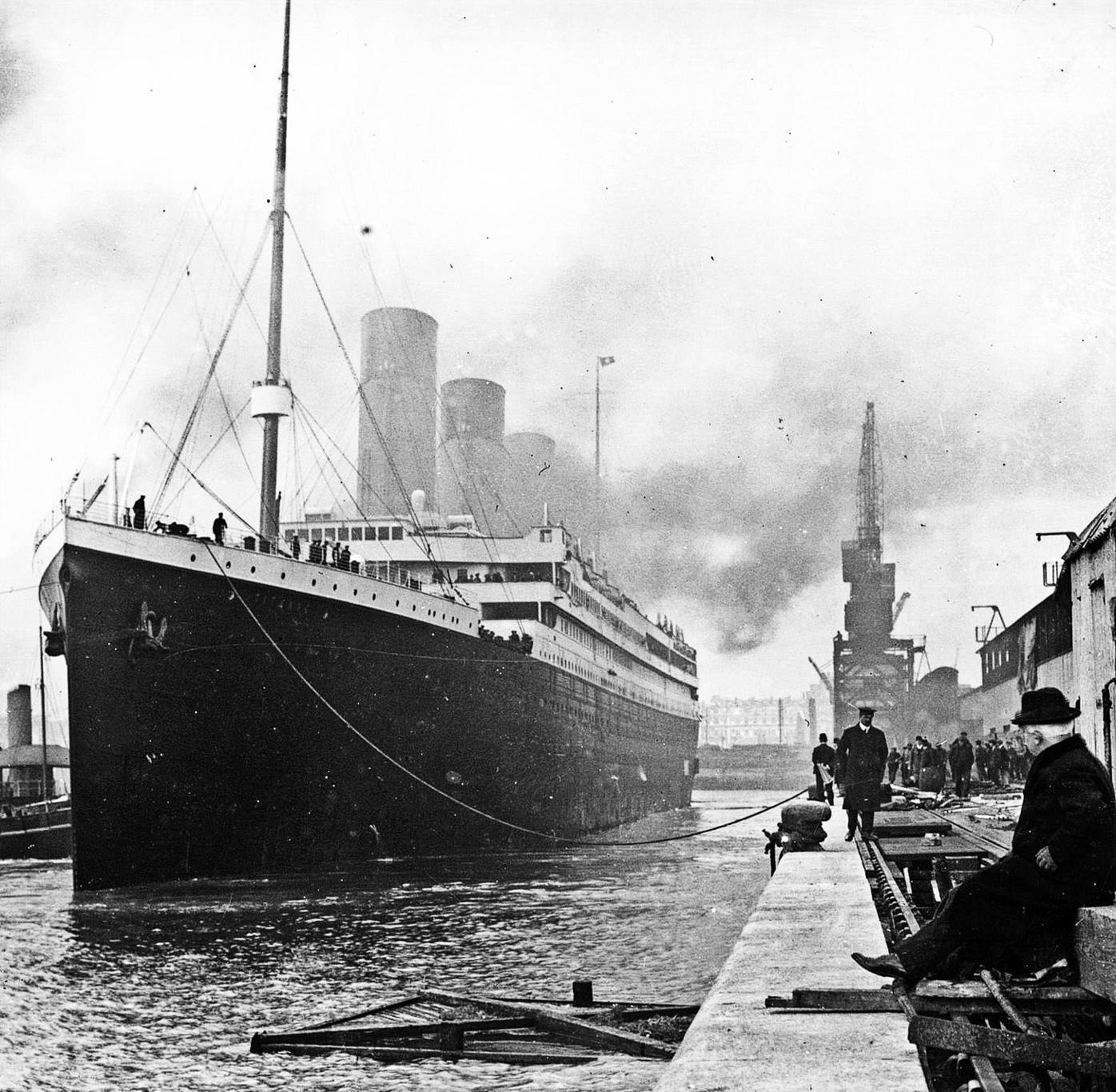 The Titanic at the docks of Southampton, England, before embarking on its doomed journey across the Atlantic Ocean.

Wing Sun Fong clung to life, lashed to a piece of wood paneling, a scrap of shipwreck adrift in the North Atlantic Ocean.

Scores of dead and dying people surrounded him, some crying out for help as they froze to death or drowned on the rising and falling swells of the lethally cold, 28 degree water.

Fong, recorded in ship manifests as Fang Lang, was 17 years old, a ship worker in the third-class bowels of the Titanic, then a brand-new luxury ship, when it hit ice and began to take on water. Fong at the time was en route to a new ship assignment somewhere in the Caribbean.

Records indicate Wing Sun—or Fang or Lang—probably was the last man rescued, pulled from wreckage and saved from the frigid Atlantic in the early hours of April 15, 1912, the morning the great Titanic sank.

Tom Fong, Wing Sun’s son, is a Janesville resident and the longtime proprietor of the Cozy Inn Chinese restaurant in the city’s downtown. Fong spent most of his life in the dark about his father’s amazing survival story. It’s a story Fong said his father never shared with him.

Now, at age 59, Fong has begun to learn much about his father’s survival. For Fong himself, it’s a story of almost incomprehensibly long odds—being the son of a Titanic survivor that history forgot.

Soon, the world will know his father’s story.

A new documentary, “The Six,” is slated for international release later this fall, Fong said. The documentary tells the story of Wing Sun Fong and five other Chinese nationals who were among the 700 some people who survived the Titanic disaster, perhaps the best-known shipwreck in modern history.

The story of “The Six” had been buried in time, untold for various reasons, including America’s earlier political exclusion and anti-Chinese sentiment, and until now, a lack of historical records to tie a half-dozen Chinese seamen to the Titanic’s notorious history.

Last year and this year, Tom Fong traveled to Canada, England and China to participate in the filming and production of a documentary led by maritime historian, author and film producer Steven Schwankert.

For Fong, “The Six” has opened a reality he still can’t fully wrap his head around.

“It’s crazy. I mean, the story sounds so crazy to anybody you tell it to. Even after I learned of it, after I found out, I never really told anybody. I was afraid to,” Tom Fong said.

“It’d be like telling someone you were inside of a UFO or you’d seen aliens. Who’d believe you? They’d think you were crazy.”

Fong said throughout his childhood and as a young adult his relatives had hinted that his father had survived a shipwreck, but Fong said his father never spoke about the accident to him or his mother, Marie, a Janesville resident who is now 86.

Fong, a Milwaukee native, never so much as heard the word “Titanic” cross the lips of his father, a restaurant waiter in Milwaukee who was 65 years old when Fong was born. Wing Sun spoke little English and died almost 40 years ago, Fong said.

In 2003, when Fong and a male cousin were visiting The House on The Rock in Spring Green, Fong’s cousin pointed to a few curios on the wall that were labeled as items recovered from the wreckage of the Titanic.

The cousin casually told Fong, “You know, the Titanic: That was the shipwreck your dad survived.”

“He thought I knew all along, but I didn’t know. Nobody had told me that before,” Fong said.

Fong said he and his son began their own Internet investigation to learn more about Wing Sun’s life and about his ties to the Titanic wreck. For years, the only clue Fong could find came from a transcript of a U.S. Senate hearing that mentioned a few Chinese survivors.

That record might have led to distorted online historical accounts, of which there were just a few, that characterized the Chinese men who survived the Titanic as ship stowaways or hucksters who had tricked their way onto rescue boats by dressing in drag and unfurling their long, braided pigtails so they would appear to be women.

Fong said he’d learned through the production of “The Six” that those accounts are untrue. But more than a decade ago, the distorted characterizations of his father he found on a few Titanic history chatrooms prevented Fong from trying more than a few times to set the record straight on what he believed were inaccurate portrayals of his father.

After a few years, Fong fell away from tracing his father’s survival story or fighting lies about the Titanic’s Chinese passengers. But a single message Fong had posted in a Titanic chatroom led producers of “The Six” to his door in Janesville.

In 2015, Fong said he got a call from producers of “The Six” who said they were trying to hunt down the surviving family of six Chinese survivors of the Titanic who had never been mentioned in any mainstream historical account of the shipwreck.

The producers believed a set of nearly decade-old Titanic chatroom snippets that showed Fong trying to reason with skeptical historians matched up with a name and raw backstory of one Titanic survivor—a teenage seaman and native of Xiachuan Island.

After a long search and facing odds of about 1 in 7.5 billion (the number of people who now live on Earth) “The Six’s” producers believed they had tracked down Wing Sun’s family. His son, no less.

And Fong was beginning to learn the truth about his dad, who records now show moved on from the Titanic disaster to land in Europe and, eventually, in the U.S. That was at least four decades before Fong was born.

“They were checking out my story. And I was checking out their story. It was a weird standoff at first,” Fong said.

“My dad was so old when I was born, and that was one thing. How could I be the son, and not the grandson or great-grandson of a Titanic survivor? The age spread between me and my dad ... would be hard for anybody to believe.”

Wing Sun’s untold, post-Titanic story rolls out between World Wars I and II—a time marked by the rise of Communism in Russia and China and flavored by anti-Chinese fervor that reigned in some parts of the U.S. and globally.

Fong now knows his father and the five other Chinese ship workers rescued and boated to New York after the Titanic never initially set foot on U.S. soil, in part because of the Chinese Exclusion Act. The act was an immigration ban on most Chinese nationals. It was enacted in 1882 and lasted in one form or another for six decades.

Fong in an interview with The Gazette, took pains not to unveil many specific details of his father’s story that he shared with—and learned from—producers of the as-of-yet unreleased “The Six.”

The film remains under censorship review by Communist Chinese officials—standard practice with films produced in part or in full in China. Fong said he believes the film will get released late this fall, but he knows about only portions of the film he participated in last year and early this year, including filming at his home on Janesville’s east side and during filming trips Fong made for to Canada, England and Xiachuan Island.

Fong said he’s learned that one person on the island has poetry Fong wrote to them detailing his struggle to stay afloat in the frigid ocean as others in the frigid water cried for help from the darkness surrounding him.

Fong said at some point he became aware of a scene from the blockbuster 1997 film “Titanic” that lives online: One that shows a pig-tailed young Chinese man in the aftermath of the Titanic sinking.

The man in the movie’s scene is shown afloat on the freezing and dark Atlantic Ocean, waving his hands for help among scores of the dead. He’s shown clinging to an ornate piece of paneling, or a door, wreckage from one of the glitzy main floors of the lux Titanic.

It’s a scene shot as part of the famous rescue sequences in the Academy Award-winning film. And it was deleted in post-production, a decision that for a couple of decades has inadvertently kept the story of Fong’s father and the other Chinese survivors lost to time.

Fong said he’s not sure if James Cameron, the producer of “Titanic” knew or knows that Fong exists or that he’s the son of Wing Sun—the Chinese man producers in the trailer for “The Six” indicate might have been the final person rescued from the Titanic before the ship’s small rescue boats headed away from the wreck.

Fong knows more now about a monumental historic event than he ever did, but he’s still coming to reckon with the unknown life of a father he only knew as an elderly man who was quiet yet proud of his American family.

A memory keeps floating back to Fong. He remembers how often his father would pull a thick, leather journal from his pocket to write entries in a foreign script Fong couldn’t read. Fong wonders what he could learn from that journal, whether it would shed light on the past, the big shipwreck and what it all meant to his enigmatic father.

No one in the family can remember seeing that journal. It likely was boxed away or discarded in his father’s waning years.

“I think that journal is long gone,” Fong said.