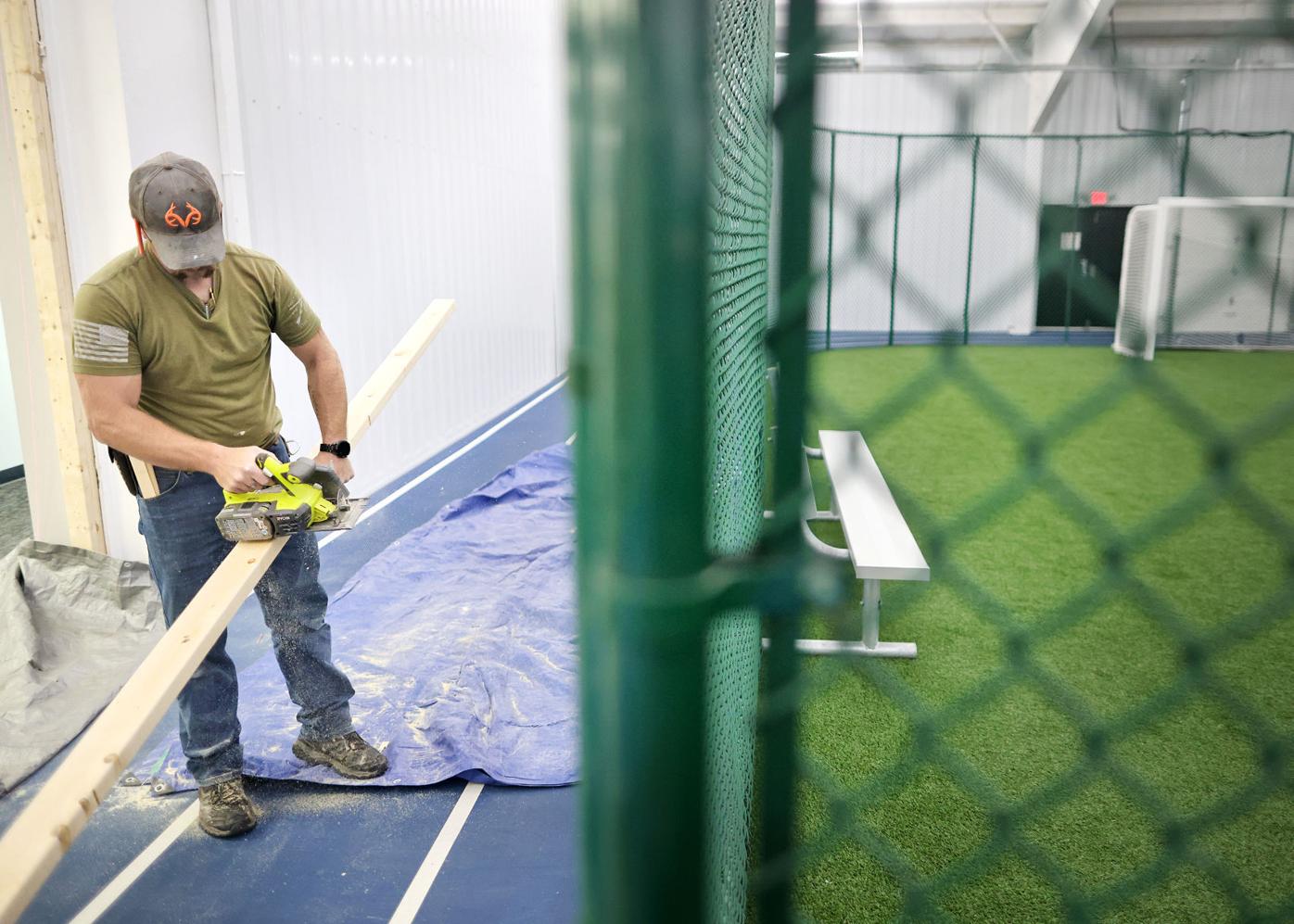 Steve Langer from McGarry’s Roofing and Construction builds the framing for a new floor-to-ceiling window and double doorway at the Janesville Athletic Club on Tuesday. 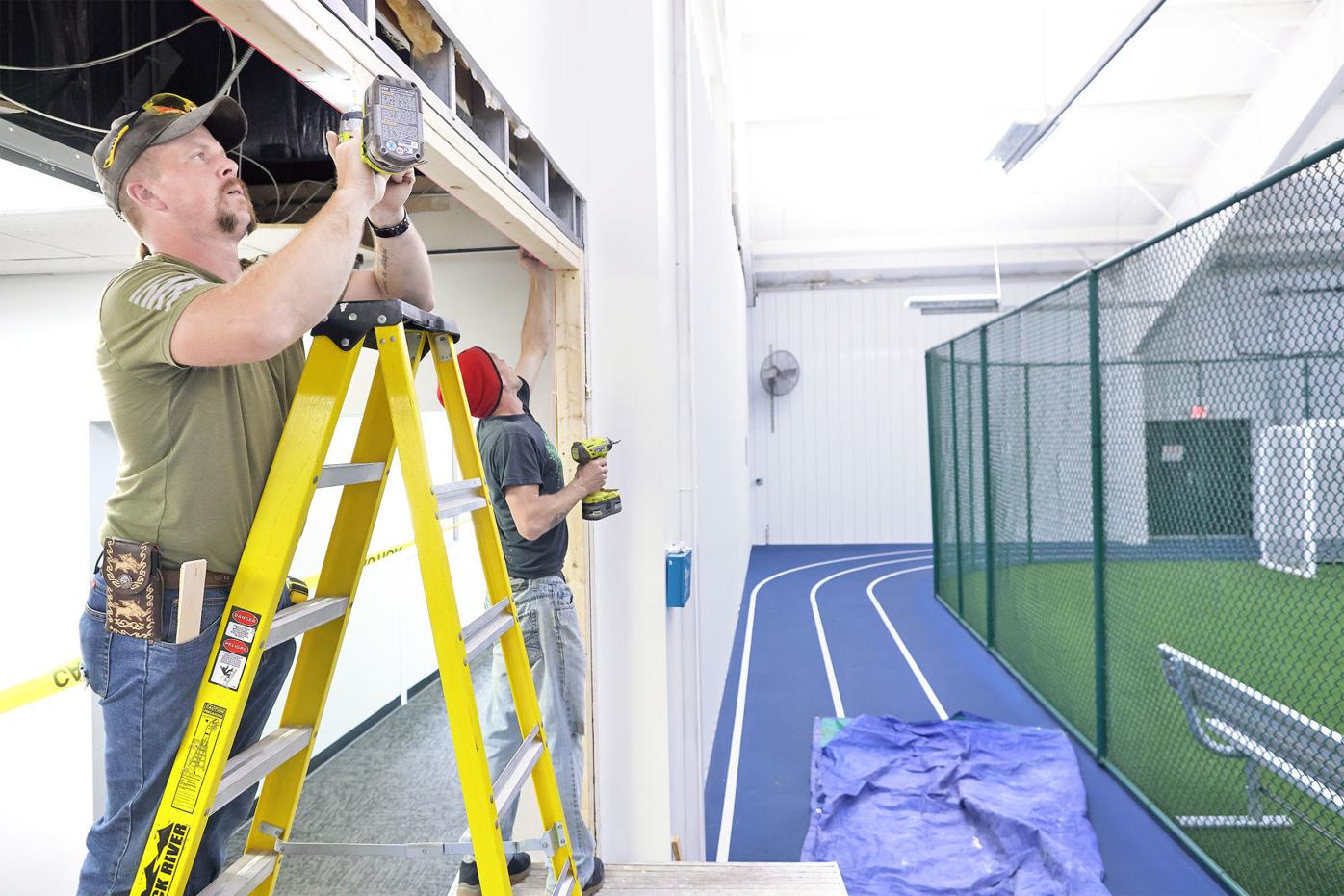 Steve Langer, left, and Darren Lennox, behind, both with McGarry’s Roofing and Construction, build the framing for a new floor-to-ceiling window and double doorway at the Janesville Athletic Club on Tuesday. 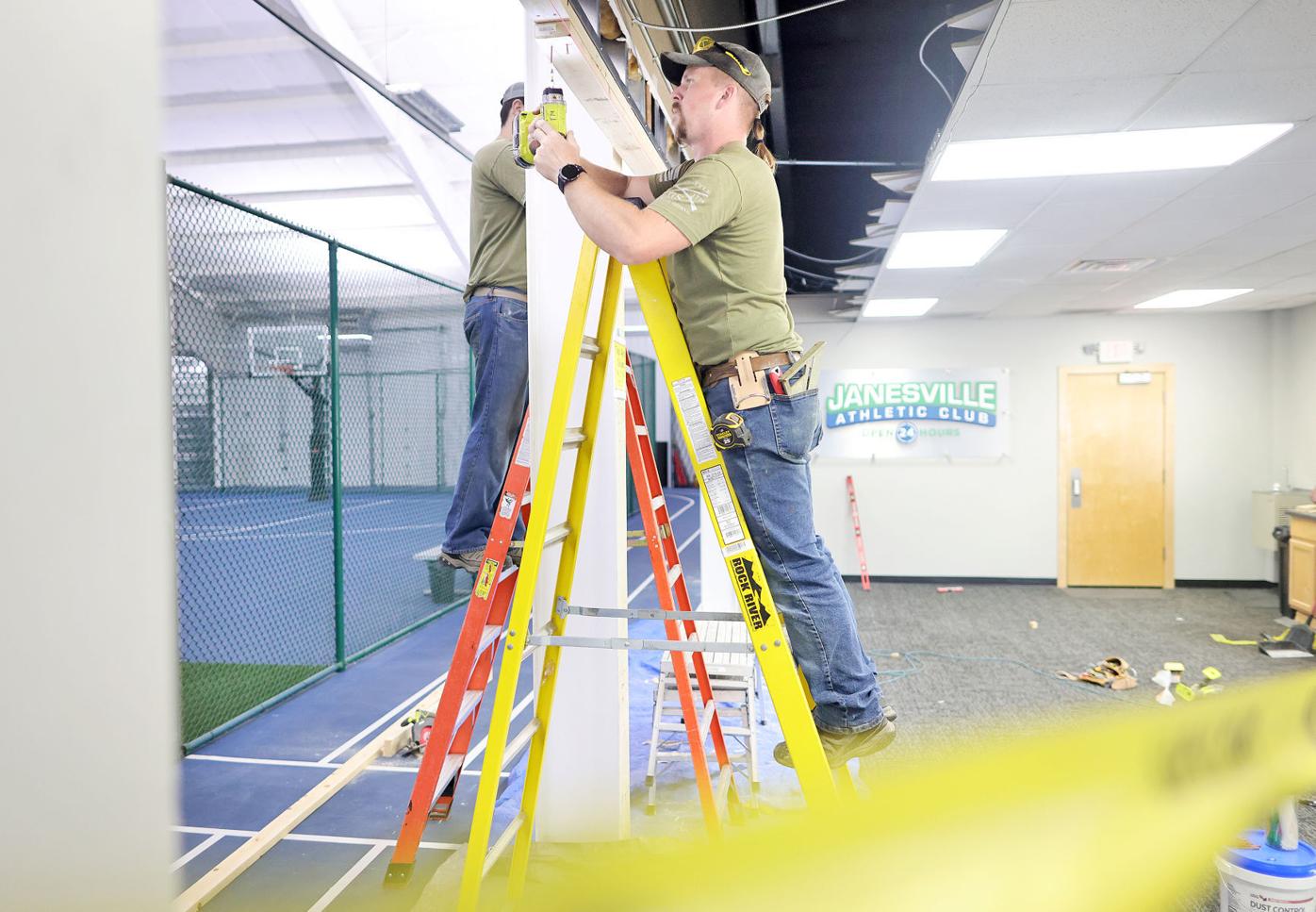 Steve Langer from McGarry’s Roofing and Construction works on the framing for a new floor-to-ceiling window and double doorway at the Janesville Athletic Club on Tuesday. 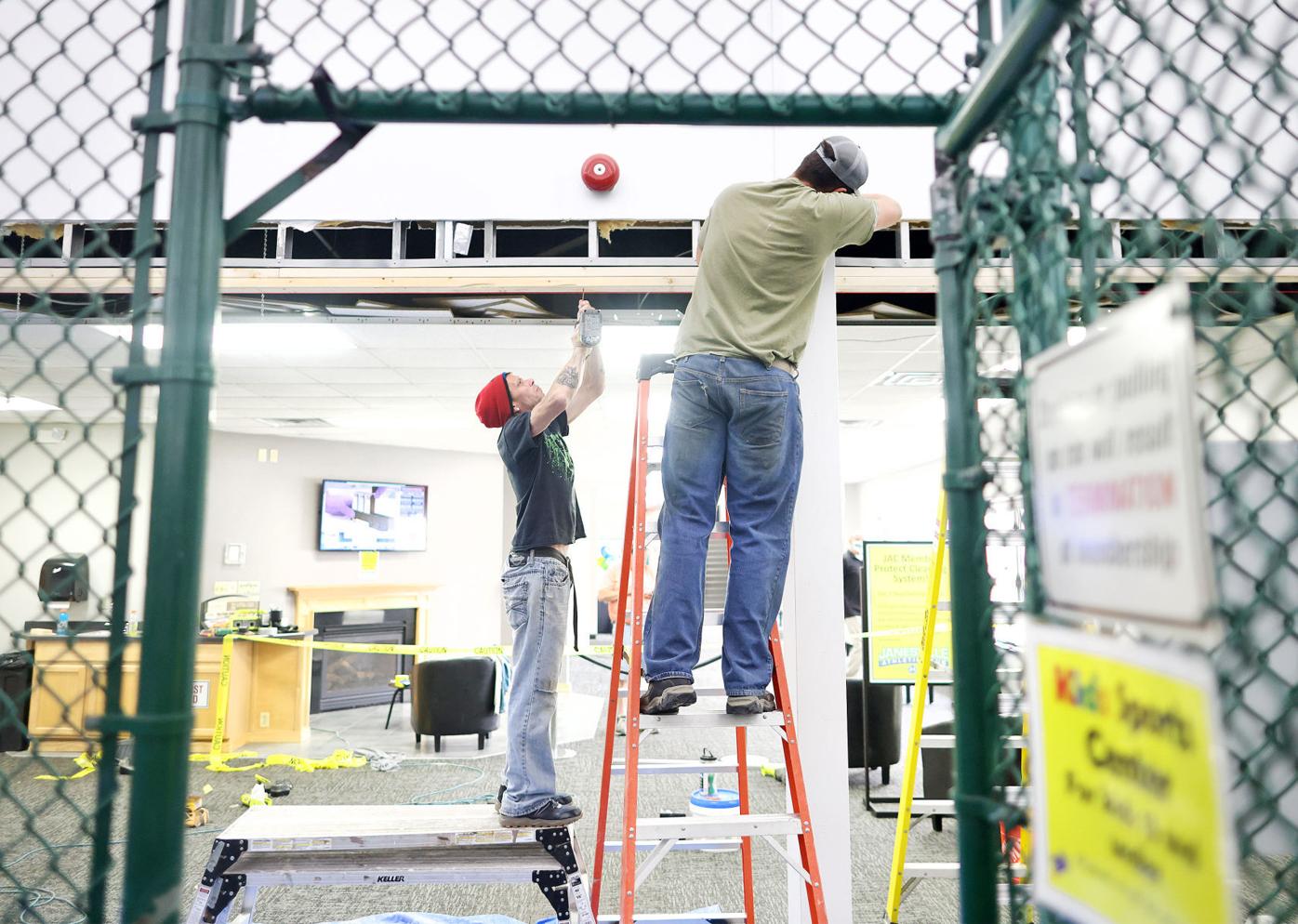 Darren Lennox, left, and Joe Denio, both with McGarry’s Roofing and Construction, build the framing for a new window and double doorway at the Janesville Athletic Club on Tuesday.

Groshan has had the fieldhouse space available for years at the club to allow people to spread out and run, but until recently, large parts of it have been dominated by tennis courts.

What’s new? Groshan is seeing less interest in tennis. A burgeoning membership is materializing as more and more people are returning to in-person workouts. But the pandemic, he said, apparently has bred a new class of gym users: families.

Groshan last year was midway through a revamp of his Sports Performance Center, a 30,000-square-foot fieldhouse space that housed basketball, tennis, an indoor track and other multiuse spaces when the shock of the COVID-19 pandemic took hold.

The gym’s longtime owner then pivoted and began to refit the space with weightlifting and stationary cycles as part of a strategy to use every square inch of the gym to accommodate as much physical distancing as possible during the pandemic.

Now, as more members are returning to the fold—many with children in tow—Groshan said the gym is focused on finding ways to accommodate a rebounding membership base and to appeal to the wants and needs of families he would like to keep as members.

Along with the mini turf football field, the Sports Performance Center will feature a turf soccer area for youngsters. He pictures teenagers practicing soccer, football and lacrosse in the new space.

In tandem, part of the space in the fieldhouse he refitted as a socially distanced weightlifting area will feature lanes where members can push workout sleds.

These are features that returning members—especially members with kids—have told Groshan they want. But in the revamped fieldhouse, Groshan said, the emphasis will be largely on free play that involves running in a bit of open space.

As part of the new layout, Groshan is knocking out a wall and replacing it with floor-to-ceiling glass so members can get a dynamic view of the Sports Performance Center while it is in use. Groshan thinks that of all the gym’s new offerings, the turfed field spaces will be most popular.

“There’s a lot of kids who just want to play catch with their friends and run football pass patterns. Just run around. There’s a lot of adults that want to do that, too,” Groshan said. “The idea is the free space—you just have got a space to run around. You know, you can do anything you want there.”

The fieldhouse, which is just one part of the 80,000-square-foot gym at 1301 Black Bridge Road, will be fully revamped and ready for running, kicking, passing and whatever one calls what lacrosse players do sometime in July. Until then, people can continue using parts of the space when it’s not under construction.

Groshan said that since the gym emerged from about a monthlong public health shutdown last year when the pandemic first emerged locally, he has seen membership slowly return.

He describes membership trends over the last year as an up-and-down, saw-tooth pattern through the twists and turns of the pandemic. Now membership is making a steady comeback.

Groshan thinks most gyms expect an explosion of demand as more and more people become immunized against COVID-19, which makes it timely that his refitted space would come together later this year.

Groshan said as the U.S. recovers from a pandemic that has left people isolated, quarantined—and possibly out of shape—most health and fitness associations are touting the virtues of gyms for both physical and mental well-being.

For one, he said, what 14-year-old (or 44-year-old, for that matter) doesn’t want to run deep to snag a long pass on a football field—maybe even dive for the ball?

“Someplace to play sports year-round?“ Groshan said. “It’s something I wish Janesville had when I was a kid.”