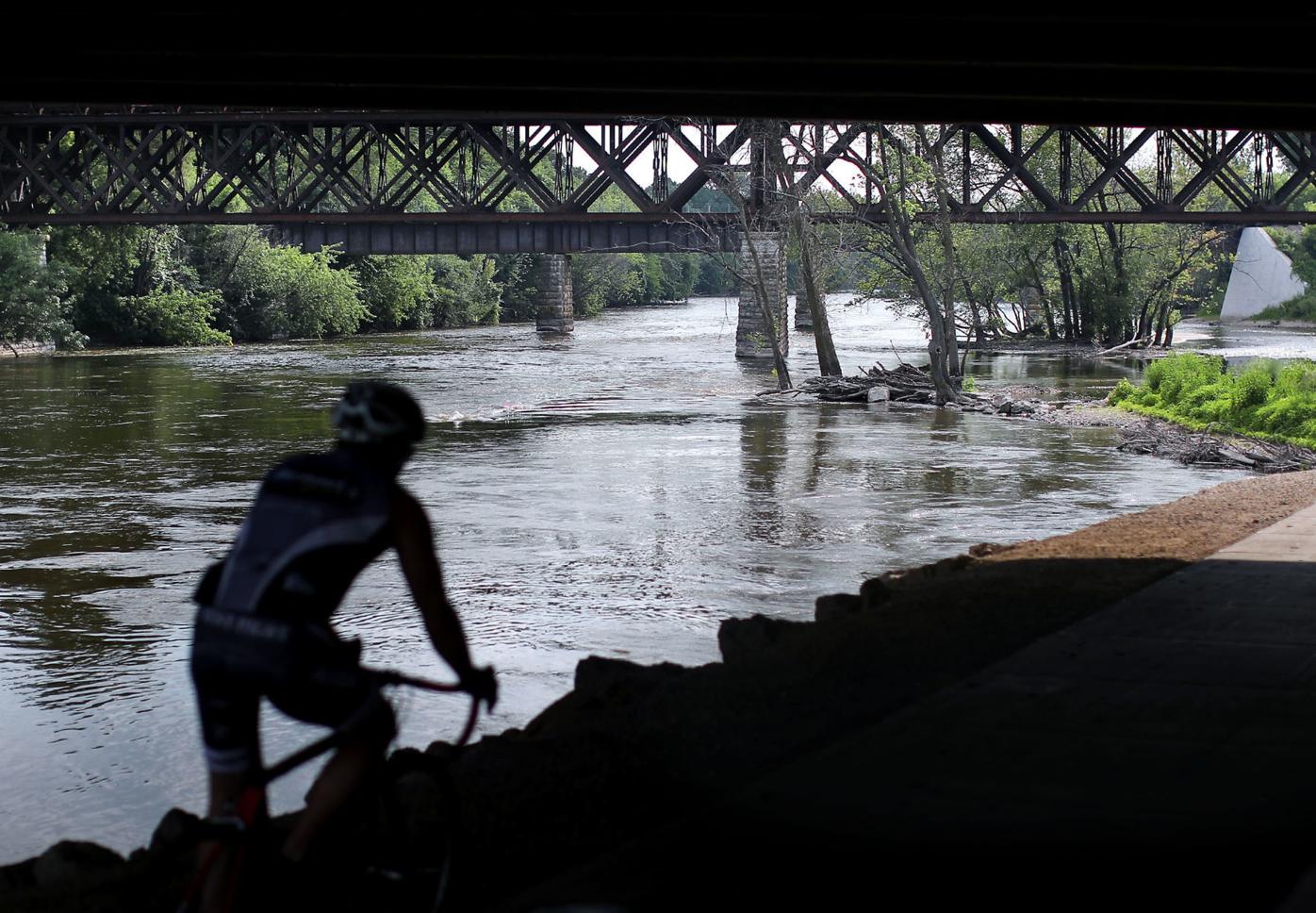 A bicyclist nears the shoreline of Anglers Park as he travels beneath the Monterey Bridge along the Ice Age Trail in Janesville on Thursday afternoon. It was in Anglers Park where authorities say 9-year-old Madison Billups of Janesville slipped off a sandbar and was pulled underwater last week, which is now raising questions on the level of safety along the Rock River through Janesville. 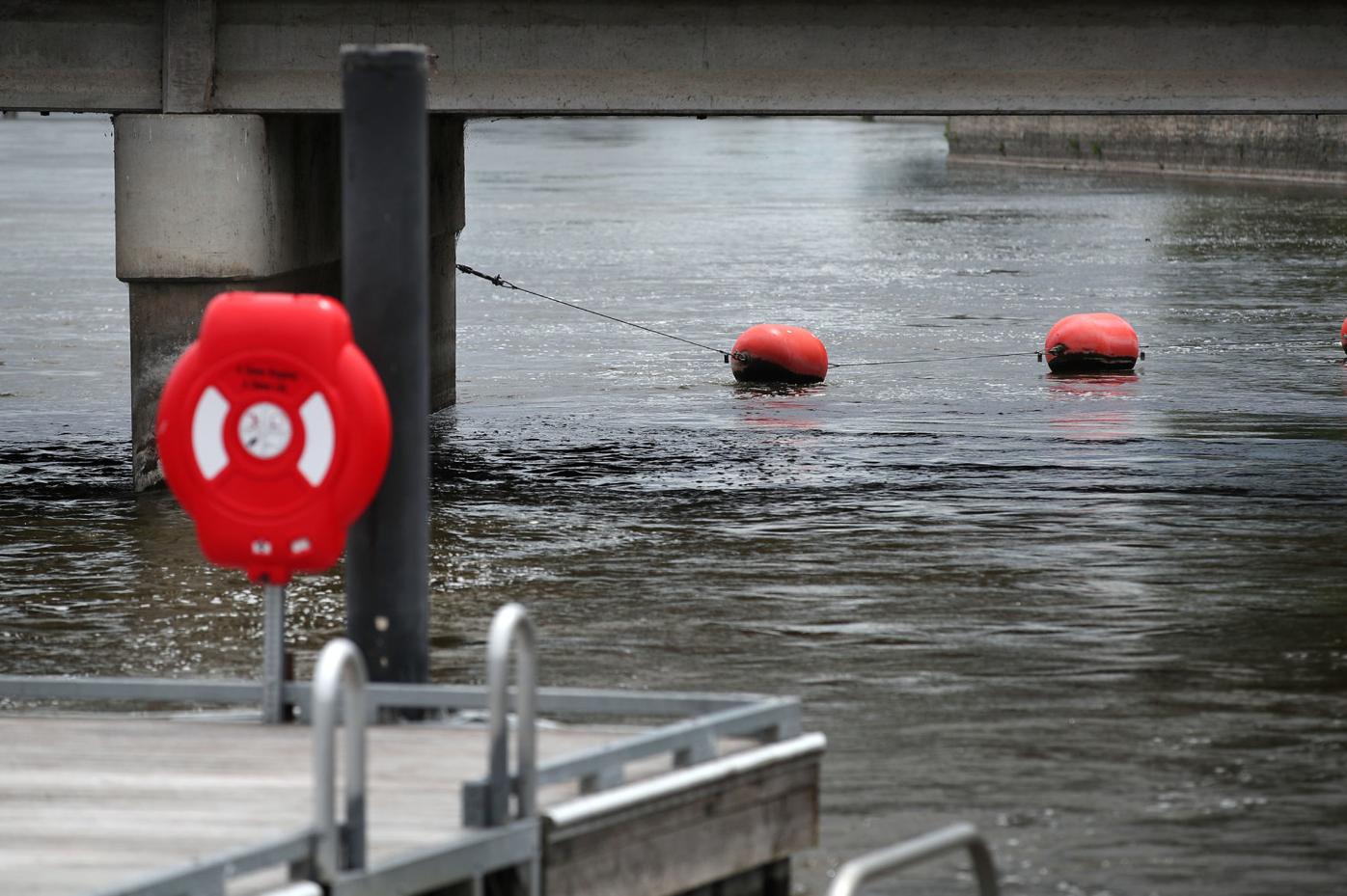 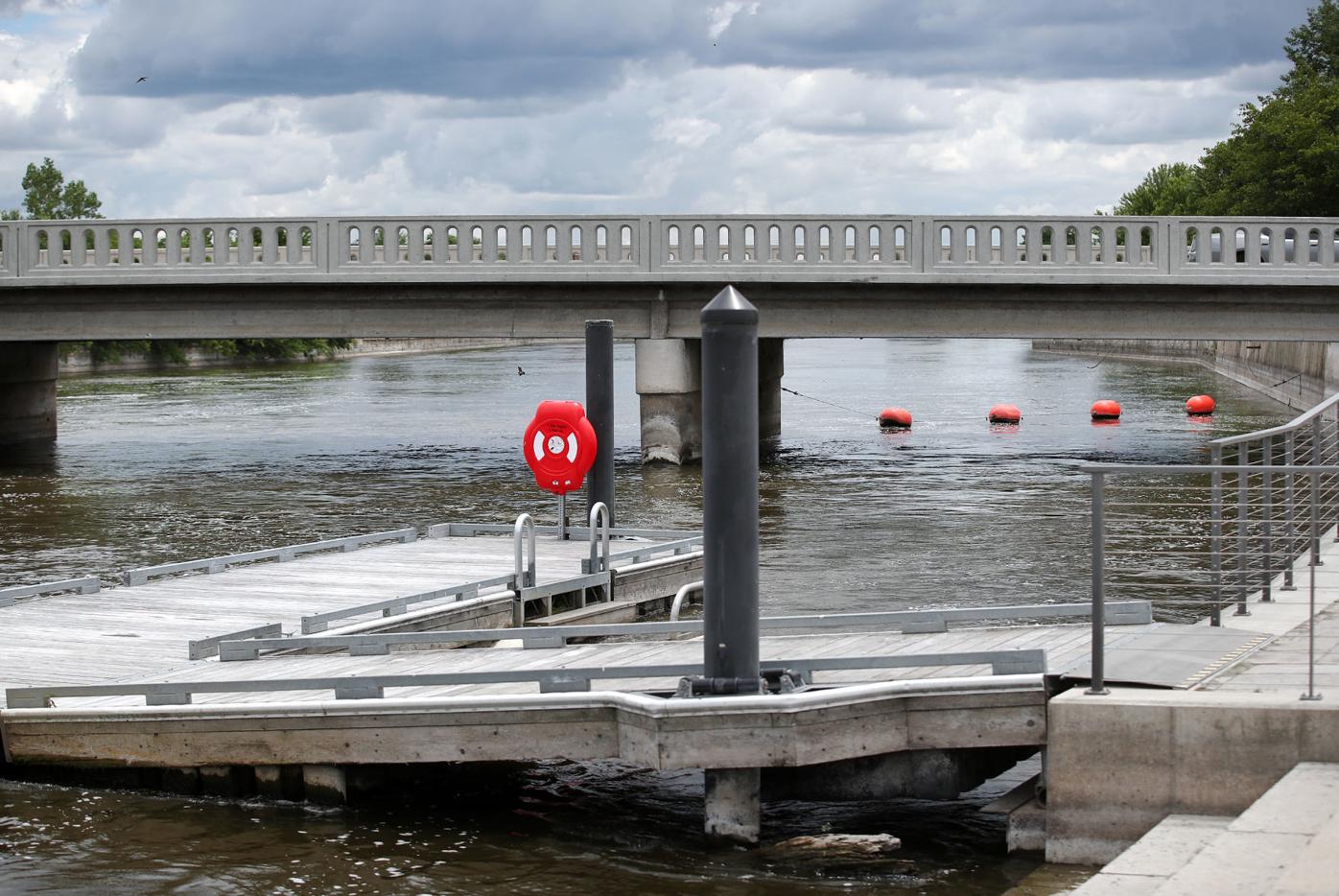 A bicyclist nears the shoreline of Anglers Park as he travels beneath the Monterey Bridge along the Ice Age Trail in Janesville on Thursday afternoon. It was in Anglers Park where authorities say 9-year-old Madison Billups of Janesville slipped off a sandbar and was pulled underwater last week, which is now raising questions on the level of safety along the Rock River through Janesville.

Just west of the Monterey Bridge alongside Anglers Park, the Rock River shoots through narrows with a racing, diagonal current and a swirling undertow.

It sweeps past the stone abutments of two train trestle bridges, where authorities say 9-year-old Madison Billups of Janesville slipped off a sandbar and was pulled under last week.

The accident sparked a dayslong search for the girl in waters treacherous enough that trained river divers had to order the Indianford Dam shut to draw down the river and slow the dangerous current.

Billups’ death has some residents questioning whether the city could do more to make the riverfront at Anglers Park safer for families.

One resident said he would like to see a fence along the north riverbank at Anglers Park.

Upstream, at the ARISE Town Square, the city has placed emergency flotation devices on a pier and near the river wall downstream. It also has strung a floating cable across part of the the river at the Court Street bridge downstream of the town square.

Those are safety upgrades installed in 2019 after a boy slipped off the downtown pier and got pulled downstream in the swift current. In that incident, a fisherman and police were able to quickly reach the boy and rescue him.

Madison Billups was not that fortunate.

The city created Anglers Park as part of a riverfront face-lift after it tore out the Monterey Dam in 2018. The park has a new fishing pier and offers open access to the river for fishers and kayakers.

Similar to the town square, Anglers Park is among riverfront amenities the city recently began focusing on to make the central city’s riverfront more of a draw to families and outdoor enthusiasts.

Woodard said it’s likely the city will install at least one emergency flotation ring near the river at Anglers Park, although it’s possible the city could discuss more than one safety option.

Bystanders at Anglers Park last week said Billups and her older brother apparently waded out together into the river’s shallows on a sandbar off the north bank but then slipped out onto a rocky area near a swirling eddy.

Janesville police officials said an adult bystander who was fishing nearby tried unsuccessfully to pull Billups from the swirling undertow.

Last week, when Billups disappeared, the river was considered to be at a normal summer stage.

The spot typically is shallow but has a swift current over large rocks and an undertow that Rock County Sheriff’s Office Capt. Mark Thompson said rescue divers last week measured at more than 7 mph.

What about a fence?

Nathaniel Hunt, 19, of Janesville said he was at Anglers Park last Thursday, repelling off a stone abutment of the train trestle bridge near where Billups went in, when he heard shouts for help from the river—and then shortly afterward, police sirens.

Hunt said he thinks the current is more dangerous than children might recognize.

He believes that if the city wants to cultivate a public fishing park for families near a part of the river with a dangerous current, the city should erect some kind of fence along the riverbank at Anglers Park that could at least serve as a visual cue that children should stay out of the river there.

“Just like a nice, decorative, black metal fence,” Hunt said. “Have some ‘park friends’ volunteers come and put a fence in. Start early on it, and maybe you can prevent a terrible thing like that from happening again.”

Woodard said Anglers Park is designed for shoreline fishing and kayaking, both of which hinge on open access to the water. He said fencing the area might be counter to the park’s intended purposes.

“It’s a difficult balancing act because you’re trying to provide access to the river. There’s a lot of people up and down that access Anglers Park for fishing. So the question is how do you provide for safety yet allow other activities to occur?” Woodard said.

He pointed out the city has miles of riverfront that borders on city parks and public areas. Public walkways that run directly alongside the river are among the few places where the city places guardrails.

“If you’re putting up fencing along the river, where do you start and where do you stop? How do you justify one area or another? I’ll agree maybe the current may be stronger there (at Anglers Park), but there’s probably other places in the river where you have similar circumstances,” Woodard said.

Woodard said it’s a challenge to provide safety measures along the river that work well for everyone because people visit the riverfront for a variety of reasons.

For instance, he said, a city safety committee is now reviewing the floating cable it installed partway across the river near the town square. The cable, which is buoyed by large floats, is designed as an emergency lifeline that a person who falls into the river might be able grab.

Some kayakers recently told city officials that the wire downstream from a kayak launch poses a hazard to kayakers.

Woodard said the city is discussing whether to keep or remove the floating cable or move or eliminate the boat launch from the floating pier.

He said there are other places near downtown to put in kayaks, and the boat launch at the town square pier has seen little public use.

Thompson is at the helm of the sheriff’s office’s recreational safety division, but he’s not involved in the city’s reviews of safety at city parks along the riverfront.

During the five-day search for Billups, Thompson told The Gazette it’s not straightforward what extra safety measures might be viable at Anglers Park.

He said that run of river is a shallow, rocky bottleneck where debris floating downstream can snag and get stuck.

Thompson said safety wires, nets or other man-made structures across the water at Anglers Park, whether floating or suspended, could catch debris just as easily as the river’s rocky bottom.

That could create potential hazards on the surface for people fishing or using small boats.

“Nets and wires and things like that aren’t a great idea. They can catch big tree limbs and logs. They can catch everything floating downriver. They can get submerged when the river goes up, and then you can’t see them. You’ve got to look at what’s safest for everybody using the river,” he said.

Last weekend at the splash pad at the ARISE Town Square, Janesville residents Nic and Natalie Tallman played with their daughter, Noel, who is a toddler.

Both said they think it made sense for the city to install safety equipment, such as emergency grab wires, downstream of the town square’s pier. Both said they believe the city should research what actions it might take at Anglers Park in the wake of Billups’ death.

“As an adult or parent, you have to have personal responsibility,” Natalie Tallman said. “But at a place like Anglers Park, maybe you don’t know what’s there in the water. It looks like it’s 2 feet of water, but if there’s a major current?

“Maybe at least put up a sign that says something about that so that people know their risk.”

The coronavirus pandemic has prompted the city to shelve some of its strategic plans for 2020, but City Manager Mark Freitag said the city is still in good shape.