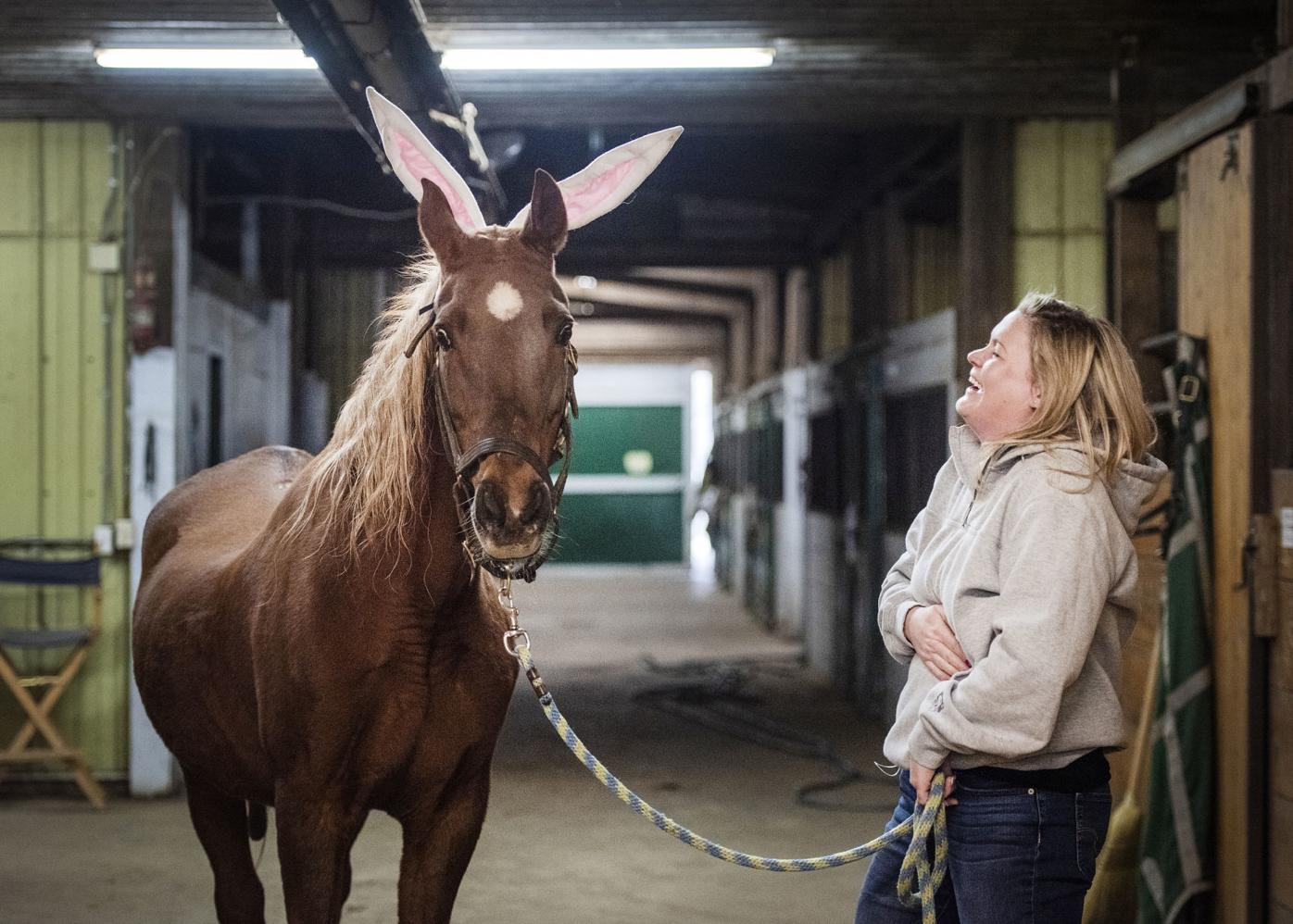 Allison Graf laughs as she stands next to her horse, Bunny, who wears bunny ears for Easter so that people can take photos with him at an April 13 Easter charity event in Milton. 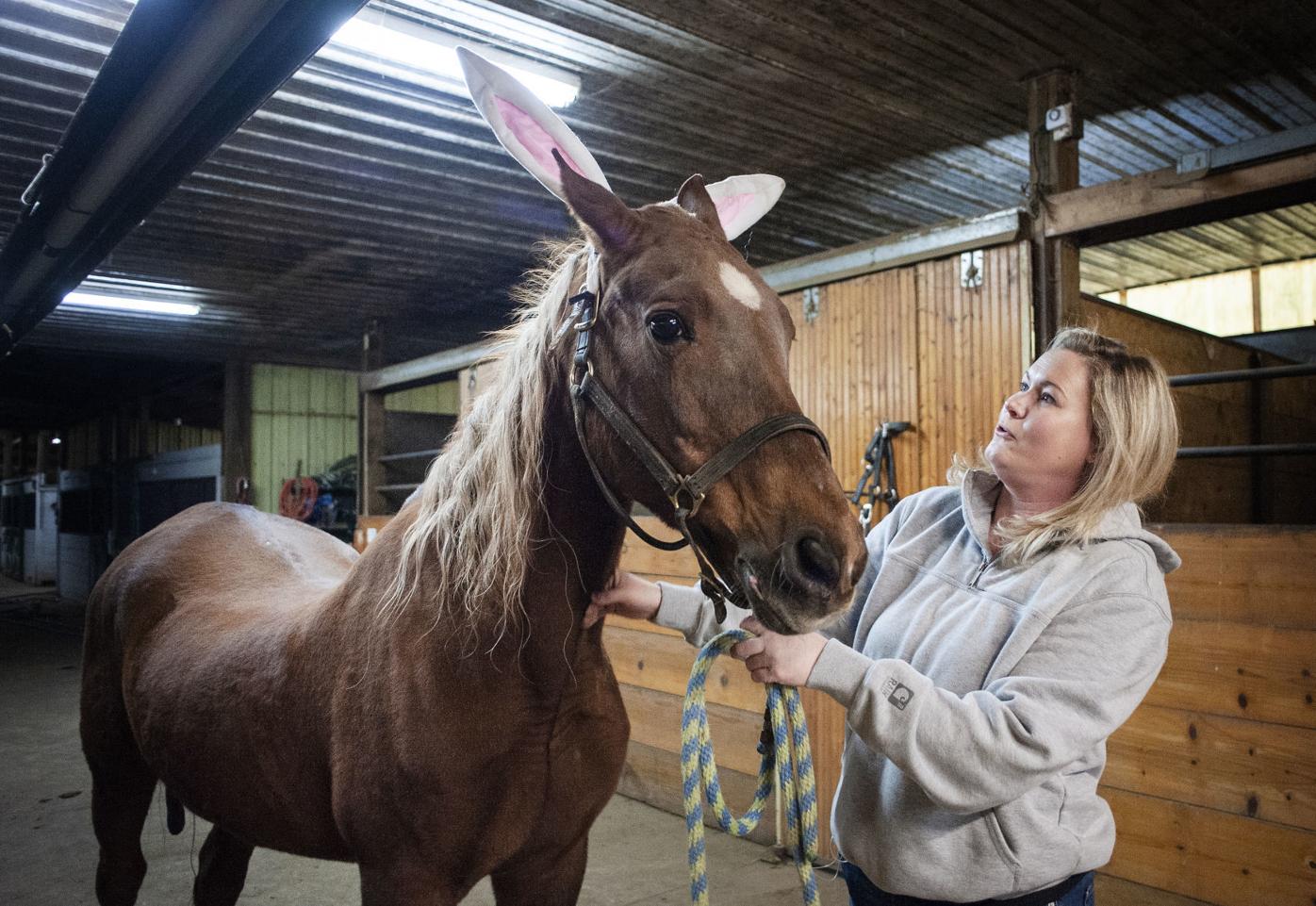 Allison Graf looks at her horse, Bunny, as he wears bunny ears March 30 in Milton. 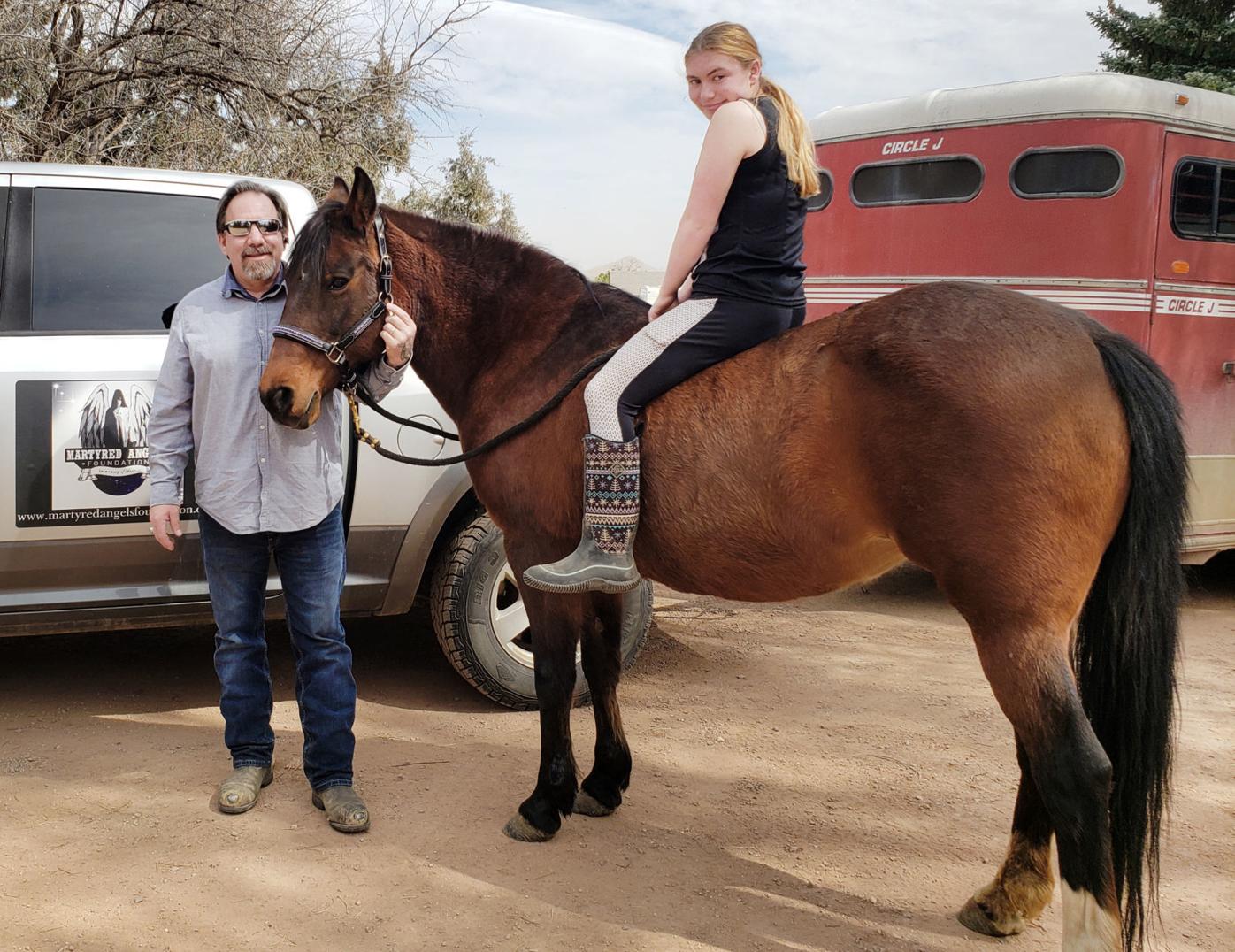 Allison Graf laughs as she stands next to her horse, Bunny, who wears bunny ears for Easter so that people can take photos with him at an April 13 Easter charity event in Milton.

Allison Graf looks at her horse, Bunny, as he wears bunny ears March 30 in Milton.

John Wayne Vogels has no words to express the heavy pain in his heart since his 3-year-old son died.

He also has no words to express how a mare named Dakota lightened his suffering.

“When my wife and I spend time brushing Dakota and caring for her, it’s like a huge weight is lifted,” Vogels said. “I can’t explain it, but it just makes your day easier.”

The horse also has made a huge difference in his daughter Raven’s life.

“She and Dakota have this amazing connection,” Vogels said. “They support each other in a way I cannot explain.”

After his son’s death, Vogels decided to help other grieving parents and children who have lost parents. He started a Colorado-based foundation called Martyred Angels.

The nonprofit group raises money to help families pay for cemetery plots next to their children, counseling and access to riding lessons as a way to heal.

It also makes spending time with horses possible for those with post-traumatic stress disorder related to the loss.

Vogels, who grew up between Janesville and Beloit, now lives in Boulder, Colorado.

But word of his foundation has reached Rock County.

Allison Graf of Milton, who also believes in the healing power of horses, recently learned about Martyred Angels through her sister, who lives in Colorado.

She reached out to Vogels.

“As he explained his story and the mission of his group, I wondered how I could help,” she said.

Graf enjoys doing special events at Milton’s Bellaire Farms, where she is an assistant riding instructor. She calls the farm “my happy place.”

With the support of Kris Martalock, who owns the farm, Graf is hosting a fundraiser Saturday, April 13, to support the foundation and its programs.

“It’s such an important cause,” Graf said. “The people who work at the foundation are so passionate.”

The money will help an area family or two, depending on how much is raised.

Vogels lost his son, Bladyn, in a 2011 drowning accident.

“I can’t even begin to explain the grief that followed that day,” he said. “Only those who have lost a child understand how deep it is.”

Some marriages can grow through grief, but others end in divorce.

“We are really trying to keep families together and to help them through their daily struggles,” Vogels said.

Two years ago, the horse Dakota came into his life.

He and his wife, Teresa, also spend time around horses at ranches where their daughter takes riding lessons.

“Horses are the most incredible therapists I have ever been around,” Vogels said. “Somehow just being around horses alleviates the grief, the pain and the struggles you are having.”

The pain of losing a child never goes away, but being around horses “just makes me feel so much better,” he said.

Vogels wants other parents to know his organization is there to support them.

“Blaydn was the most incredible little boy,” he said. “We want the foundation to reflect the blessing that he was and is.”

What: Easter charity event for nonprofit Martyred Angels. The group helps parents who have lost children and children whose parents have died.

Learn more: For more information about Martyred Angels, call John Wayne Vogels at 303-875-4626, go to martyredangelsfoundation.org or visit the organization on Facebook.