Lindsey, a community COVID-19 ambassador for free clinic HealthNet of Rock County, carried a leatherette binder full of vaccination information and a message tailored to reach the more than 80% of local Black residents who are still not fully vaccinated against COVID.

Lindsey’s goal: to canvass the streets and meet face-to-face with Black residents to try to convince them to get vaccinated. She and HealthNet hope to convince 500 more people to get vaccinated at a time when local and national health data shows a flatlining in the number of people now getting the COVID vaccine.

Late Thursday morning, Lindsey had a list of about 15 residents she’d reached at a local apartment complex, a corner grocery and Clippers & Curls. Lindsey said she hopes she’ll get all those 15 to register for COVID vaccine jabs, either through HealthNet or another provider or clinic.

Lindsey’s planned to canvass the same locales again and again to try to reach more unvaccinated residents and learn why they’re not vaccinated—and whether she can convince them to get the vaccine. She’s even offered to pick the people up herself and drive them to their clinic appointment.

“We’re just out here talking. We’re not arguing or trying to change your mind if it’s already made up. We’re talking,” Lindsey said. “And talking seems like it’s the easy part, but it’s actually the hard part.”

In Rock County, a main challenge in an ongoing fight against the COVID-19 pandemic is that certain racial demographic groups continue to lag behind in vaccination.

A Gazette analysis of data from the Wisconsin Department of Health Services shows that about 17% of the Black population in Rock County is now fully vaccinated against COVID. That trails the statewide average vaccination rate of 21% for Black residents, and it’s significantly lower than the overall, 41% rate of full vaccination for all residents countywide. 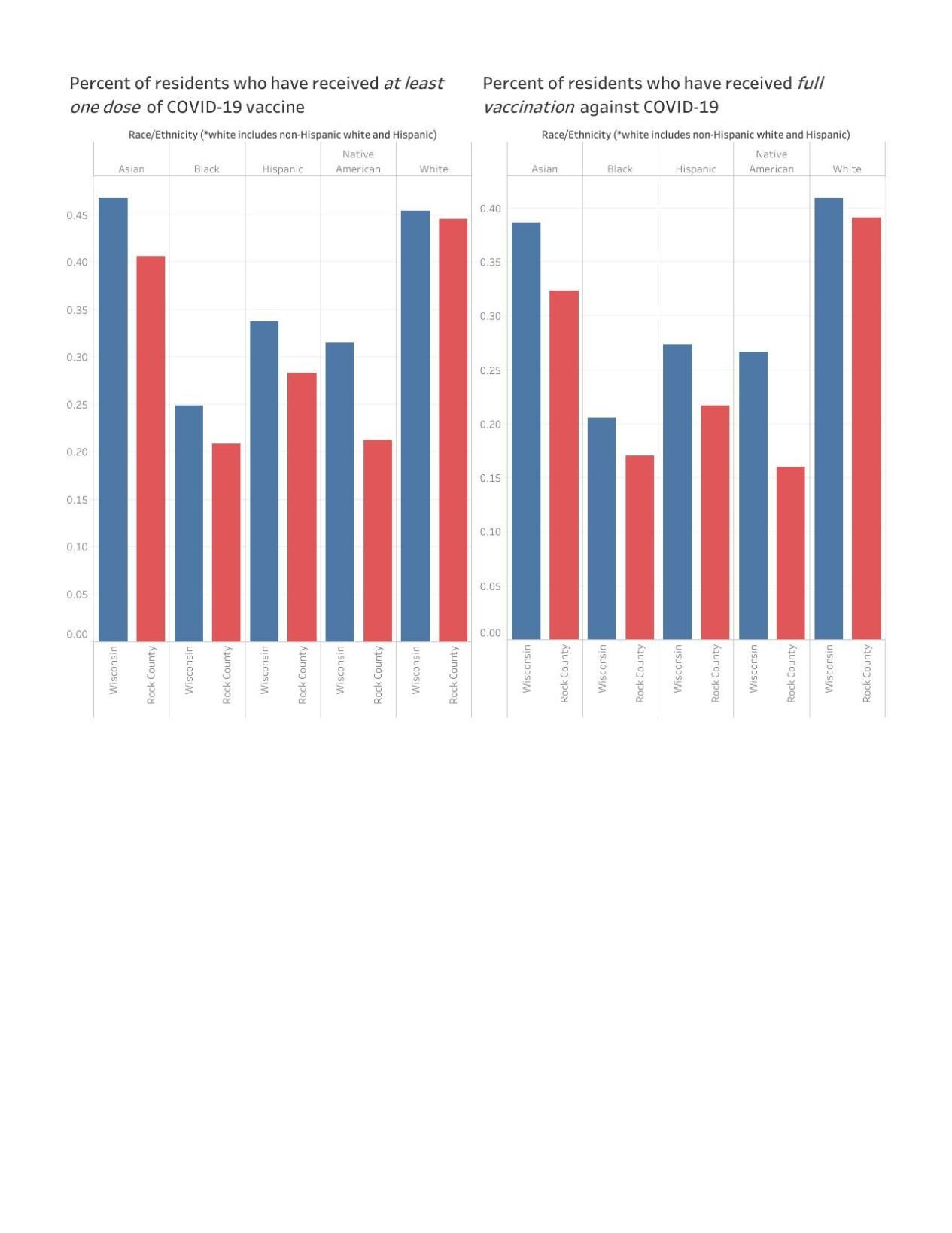 There’s an even bigger gap in the vaccination rate for local Hispanic residents. Here, about 21% of Rock County’s Hispanic residents are now fully vaccinated, a number that lags about 7 percentage points behind statewide averages for the Hispanic population.

It’s a shift from an earlier focus on mass-inoculation clinics, but the strategy, HealthNet of Rock County CEO Ian Hedges said, is the same: to get vaccine shots in arms at a time when most of the remaining unvaccinated population either is on the fence over whether to vaccinate or is opposed to it.

HealthNet’s targeted outreach—planned visits by ambassadors to public housing complexes, ethnic grocery stores and barbershops in predominately Black neighborhoods—represents a more surgical targeting of tougher-to-reach parts of the Black and Hispanic populations, which collectively make up about 25,000 of Rock County’s 163,000 residents.

That’s a significant slice of the overall population. Hedges said his strategy is to try to bring the vaccine—or at least the idea of vaccination—right in front of people who the message hasn’t been fully reaching.

Lindsey and Hedges list personal politics, uncertainty, fear or mistrust of the health care system, and a lack of a clear understanding of the relatively low degree of risk in COVID-19 vaccination as reasons why many minority residents have not gotten vaccinated.

A nonprofit study by the Kaiser Family Foundation shows that as the overall number of people unopposed to vaccination receive their shots, the slice of the population that for months has taken a “wait and see” approach to getting the vaccine continues to dwindle.

Those who are still on the fence over a vaccine total just over 12% of the population, the Kaiser study estimates.

Hedges said that so far, only 12 states in the U.S. have reached an overall vaccination rate of 70%—a benchmark many public health officials believe would give the U.S. population so-called “herd immunity” from COVID.

Most states that have reached herd immunity—at least on paper—have seen concerted campaigns to reach out to underserved parts of the population such as minorities, those in extreme poverty or people who or homeless or have mental illnesses.

Hedges, whose nonprofit clinic has a disproportionately high number of minority patients, believes that Black and Hispanic populations could represent a higher percentage of those who might still be undecided about whether to get a vaccine.

He believes that a strategy which relies on finding and directly communicating with those people presents the county’s best shot at reaching herd immunity—or at least having enough people vaccinated that fewer neighborhoods or demographic slices of the population are at risk of hot spots for emerging COVID infection.

“We’re still finding that just because individuals say no to vaccination now, doesn't mean they will not want it later. Because we are seeing a lot of people that initially said no who are now saying yes,” Hedges said.

Nick Zupan, an epidemiologist for the Rock County Public Health Department, said the county considers the health care system’s supply of vaccine to be ample.

He said the county health department and private, community-based partners have continued to set up pop-up vaccine clinics in neighborhoods such as Janesville’s Fourth Ward, an area with a larger minority population, where county data shows a vaccination rates are among the lowest.

“We’re still seeing when we compare all our neighborhoods, we’re still seeing areas that have lower-than-average vaccination rates,” Zupan said. “I think it's going to be a circumstance where it's more work chipping away at the un-vaccinated population, rather than that we'll get like a deluge of un-vaccinated people to show up to some of these clinics. So the more opportunity you can offer, the better. And we think the higher the rates will continue to climb.”