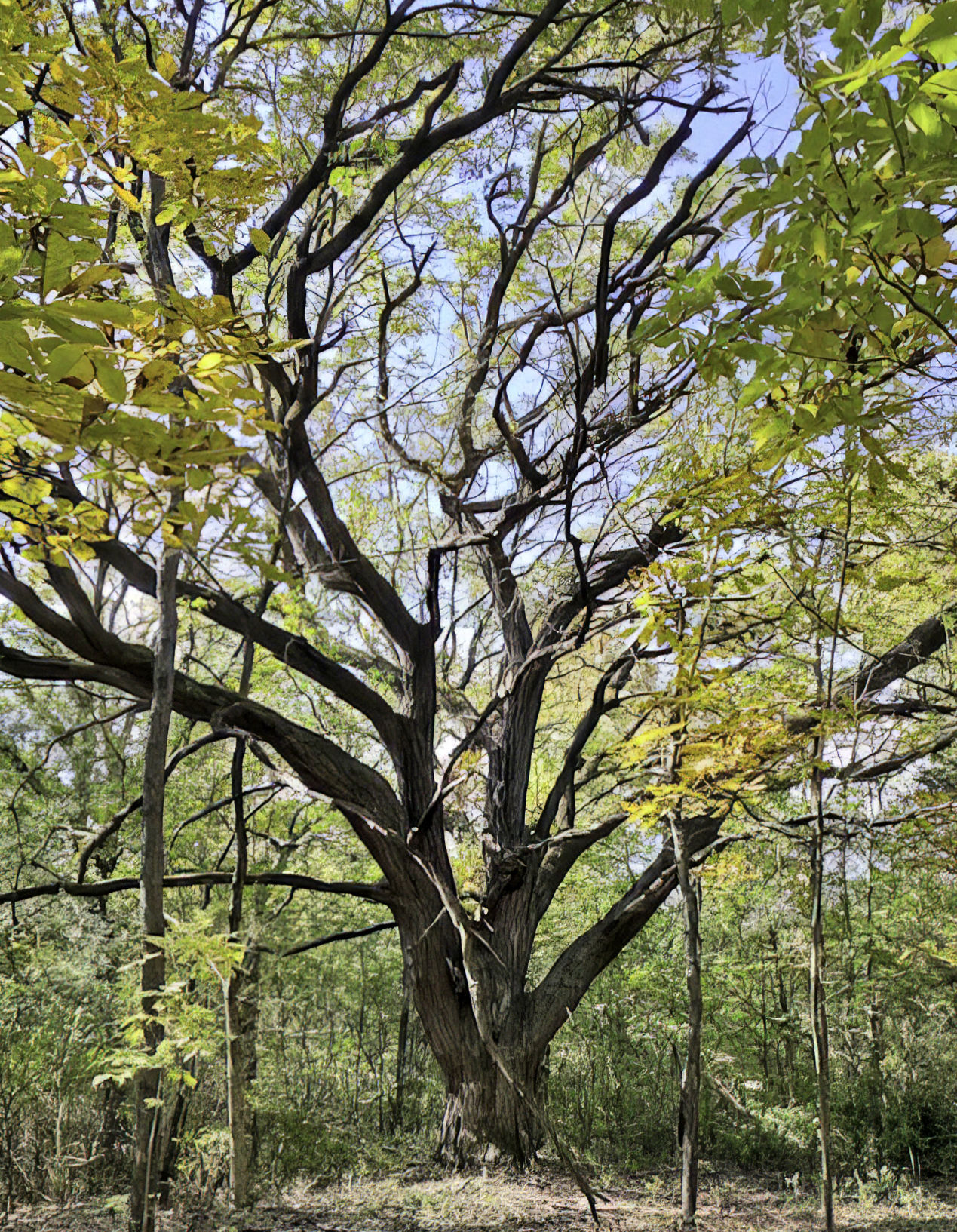 This white oak at Kettle Moraine State Park, Southern Unit, is estimated to be 350 years old. La Grange resident John Zinzow estimated the tree’s age and entered it in a contest sponsored by Geneva Lake Conservancy to bring awareness to the dwindling population of oak trees in Walworth County. 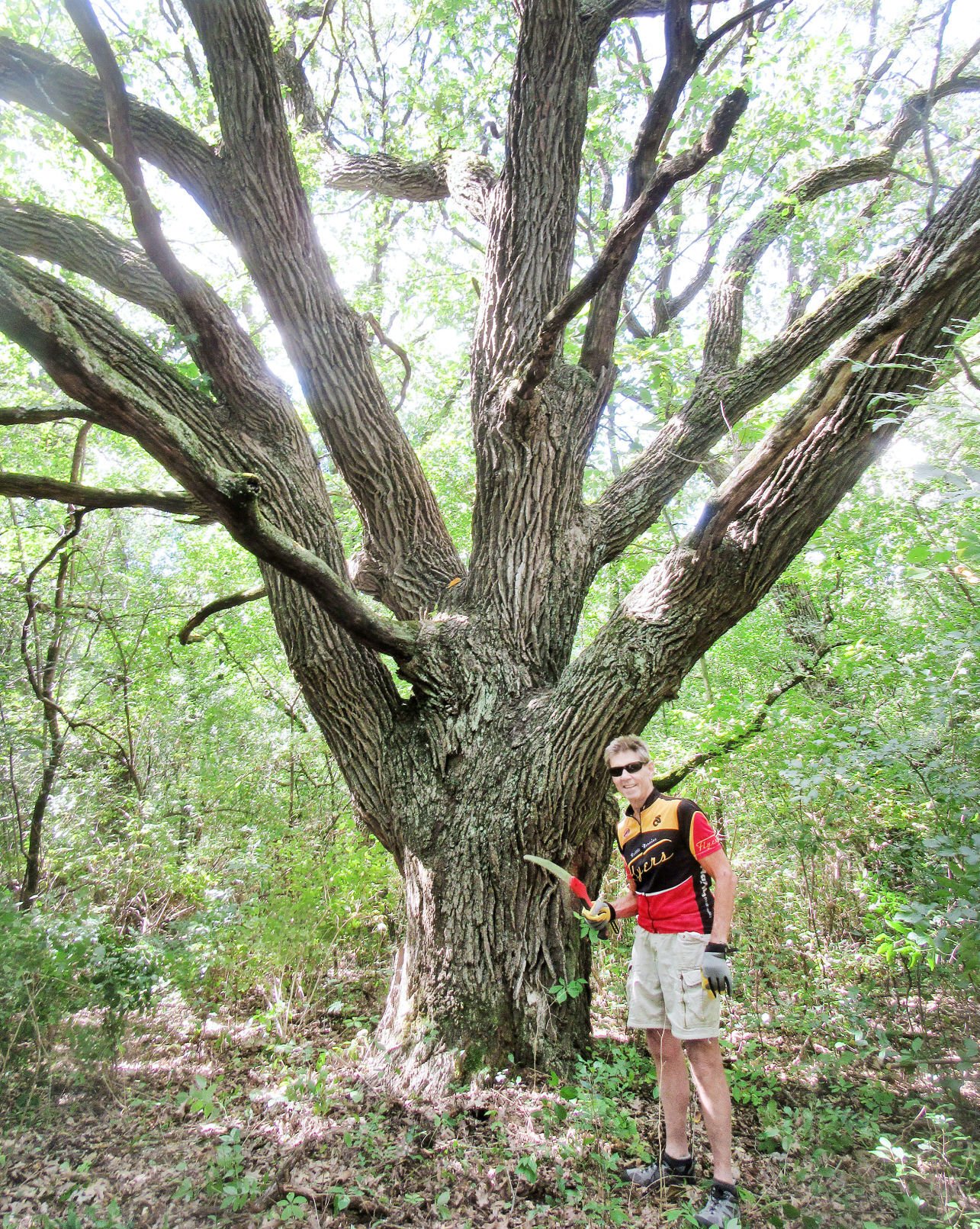 John Zinzow poses in front of the old white oak after using a handsaw to clear the area of invasive buckthorn and honeysuckle. 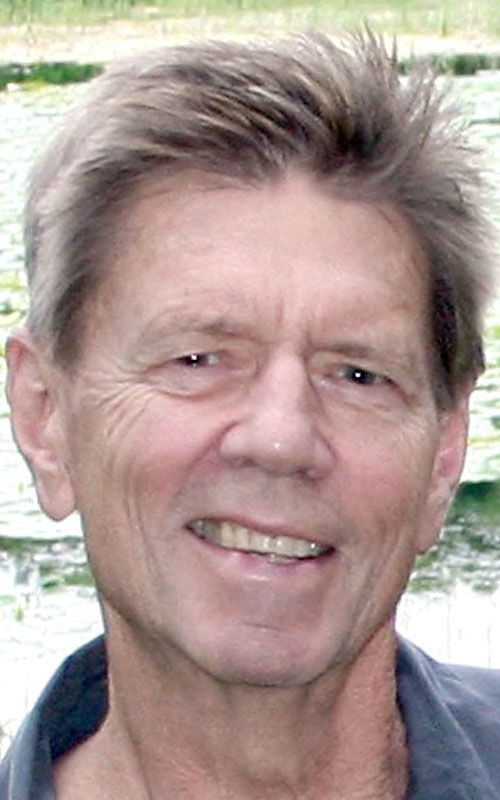 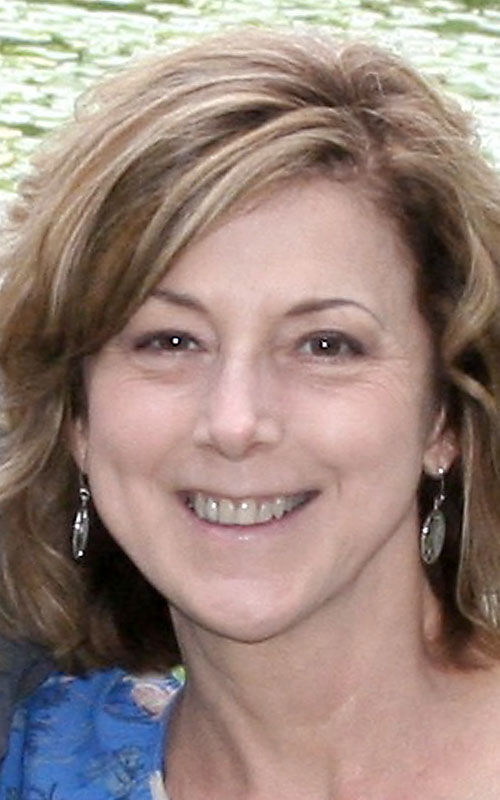 This white oak at Kettle Moraine State Park, Southern Unit, is estimated to be 350 years old. La Grange resident John Zinzow estimated the tree’s age and entered it in a contest sponsored by Geneva Lake Conservancy to bring awareness to the dwindling population of oak trees in Walworth County.

John Zinzow poses in front of the old white oak after using a handsaw to clear the area of invasive buckthorn and honeysuckle.

In the last half of the 17th century, an acorn sprouted and stood its ground among the ponds and glacial hills of what is known today as the Kettle Moraine State Forest.

Century after century, the slow-growing oak with a deep root system survived contrary winds, lightning and the ax.

John Zinzow came upon the old matriarch of the woods while hiking and running along the Nordic Trail in the Southern Unit of the Kettle Moraine a decade ago.

A thick growth of invasive buckthorn and honeysuckle surrounded the tree’s huge trunk and hid its grandeur.

When Zinzow took a closer look, he could see the giant white oak’s breathtaking branches stretching higher and higher in a billowing canopy.

Zinzow and a friend used a chainsaw to clear away the smothering brush and noticed other stout white oaks, likely descendants of the enduring mother tree.

In September, Zinzow entered the tree in a competition for the oldest oak in Walworth County, sponsored by the Geneva Lake Conservancy.

He estimated the oak’s age at a stunning 350 years.

Zinzow measured the tree’s circumference at 12 feet and calculated its diameter at almost 46 inches.

He then determined its age using a table that Marlin Bowles of the Morton Arboretum created to help people estimate the age of various trees based on the tree’s diameter at breast height.

So far, the tree is the oldest oak identified in the third year of the conservancy’s contest to raise awareness about the county’s shrinking oak population.

About six months ago, Zinzow used a handsaw to trim the invasive brush that once again crowded the impressive oak.

As he worked, people stopped to look.

“I shared with them how the oak is the dominant tree in the area,” Zinzow said. “If you look closely at nearby trees, they have the same look. I refer to them as oak families. You will see evidence of families deep in the brush.”

Zinzow and his wife, Holly Neault, live only minutes from the trees.

“We feel very fortunate,” he said.

Working with the state Department of Natural Resources, the Geneva Lake Conservancy and others, Zinzow wants to cut away invasive brush among the family of trees so people can appreciate the 350-year-old oak and others that have stood for centuries.

Zinzow has a passion for preserving and restoring the Kettle Moraine with its abundant and ecologically intertwined ecosystems.

“There are all these little habitats networked together,” he said.

The matriarch tree is part of an oak savannah, an extremely rare and threatened plant community that the Geneva Lake Conservancy wants to preserve.

Prior to European settlement, oak savannas were dominant features on the Wisconsin landscape. Now, less than 0.01% of the original 5.5 million acres remain, according to the DNR.

Clearing and plowing, overgrazing, and invasive shrubs and trees are main reasons for the dramatic decline.

In Walworth County, less than 17% of the oak forests and savannas that once covered the landscape remain, according to a study by the Morton Arboretum/Chicago Wilderness Oak Recovery Program.

The remaining trees are threatened by development, disease and inability to regenerate because of lawns and invasive species.

“A lot of people don’t see the importance of an oak tree,” said Kiera Theys, land protection manager with the Geneva Lake Conservancy.

She added that oaks provide habitat and food for hundreds of species of plants and animals.

In addition to finding the oldest tree, the conservancy is hosting its oak tree competition to locate the most beautiful and most storied oaks in Walworth County. The deadline is Oct. 1.

The effort is part of the conservancy’s Oak Recovery Program, funded by the Griffith Family Foundation, to boost the county’s oak population.

“We are hoping that getting the word out in this time of COVID will bring more people outdoors to search for the best oaks,” Theys said. “We have some really great stories from people who enjoy the beauty of their trees.”

Old oaks have aged out and died, so it is important to plant more for future generations, Theys said.

The conservancy also has worked with the Walworth County Public Works Department in planting an oak savanna at White River County Park outside Lake Geneva.

“We are really trying to focus our efforts on the importance of oaks and native plants,” Theys said. “We are trying to lead the way for others to take action.”

Anna Marie Lux is a human interest columnist for The Gazette. Call her with ideas or comments at 608-755-8264 or email amarielux @gazettextra.com.

To contact the Geneva Lake Conservancy in Fontana, call 262-275-5700 or email glc@genevalakeconservancy.org