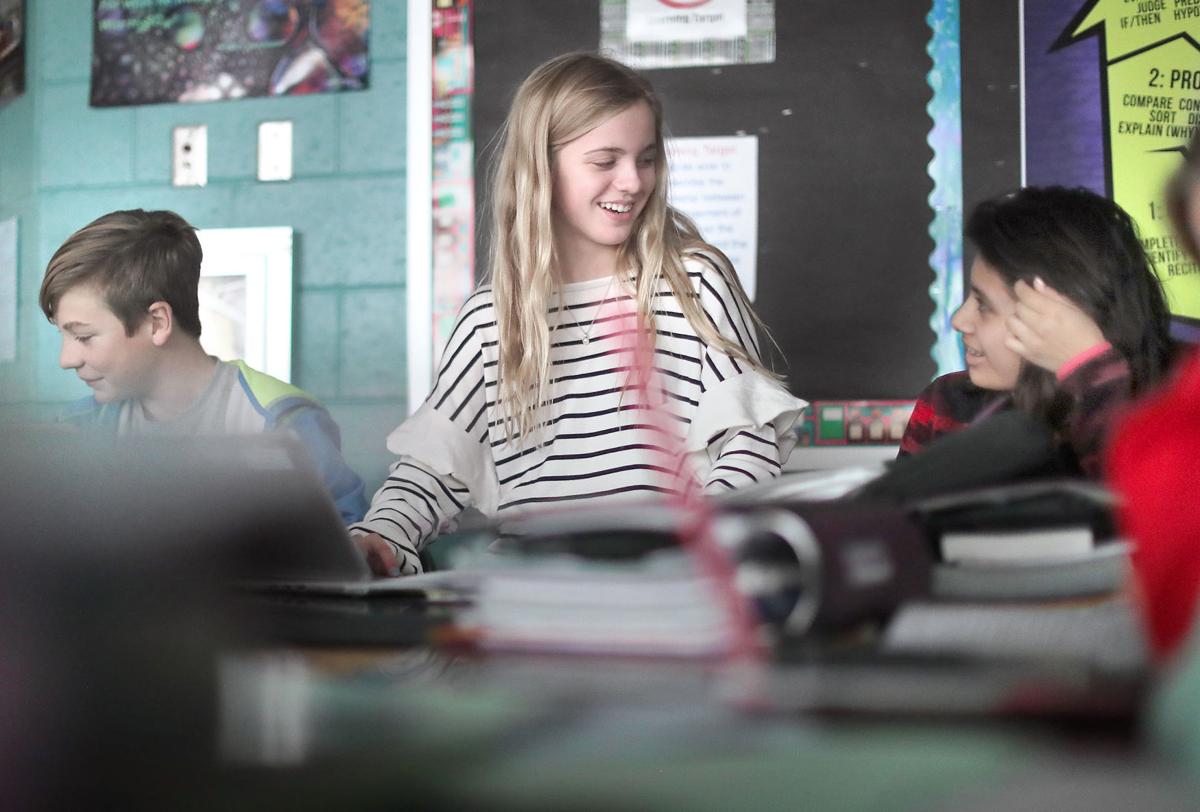 Eighth-grader Aren Gonzales, 13, takes a seat between friends as she arrives at her science class at Elkhorn Area Middle School on a recent Monday. Gonzales participants in Elkhorn’s Project Lead the Way and recently attended a national conference. She credits the program and her STEM-related classes for piquing her interest in applied sciences. 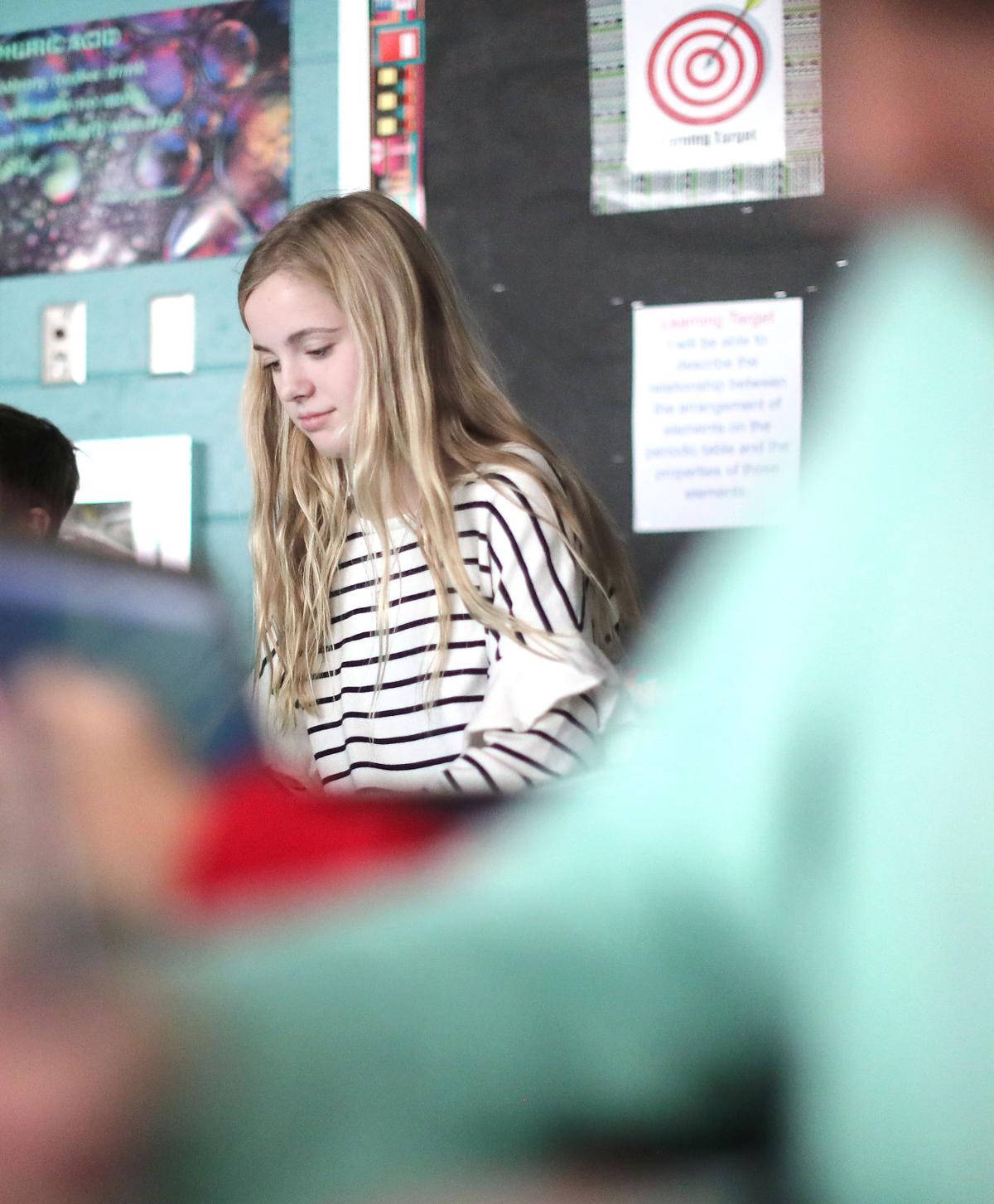 Eighth-grader Aren Gonzales, 13, takes a seat as she arrives at her science class at Elkhorn Area Middle School in Elkhorn. Gonzales participates in Elkhorn’s Project Lead The Way program, which encourages students to study the STEM fields of science, technology, engineering and math. 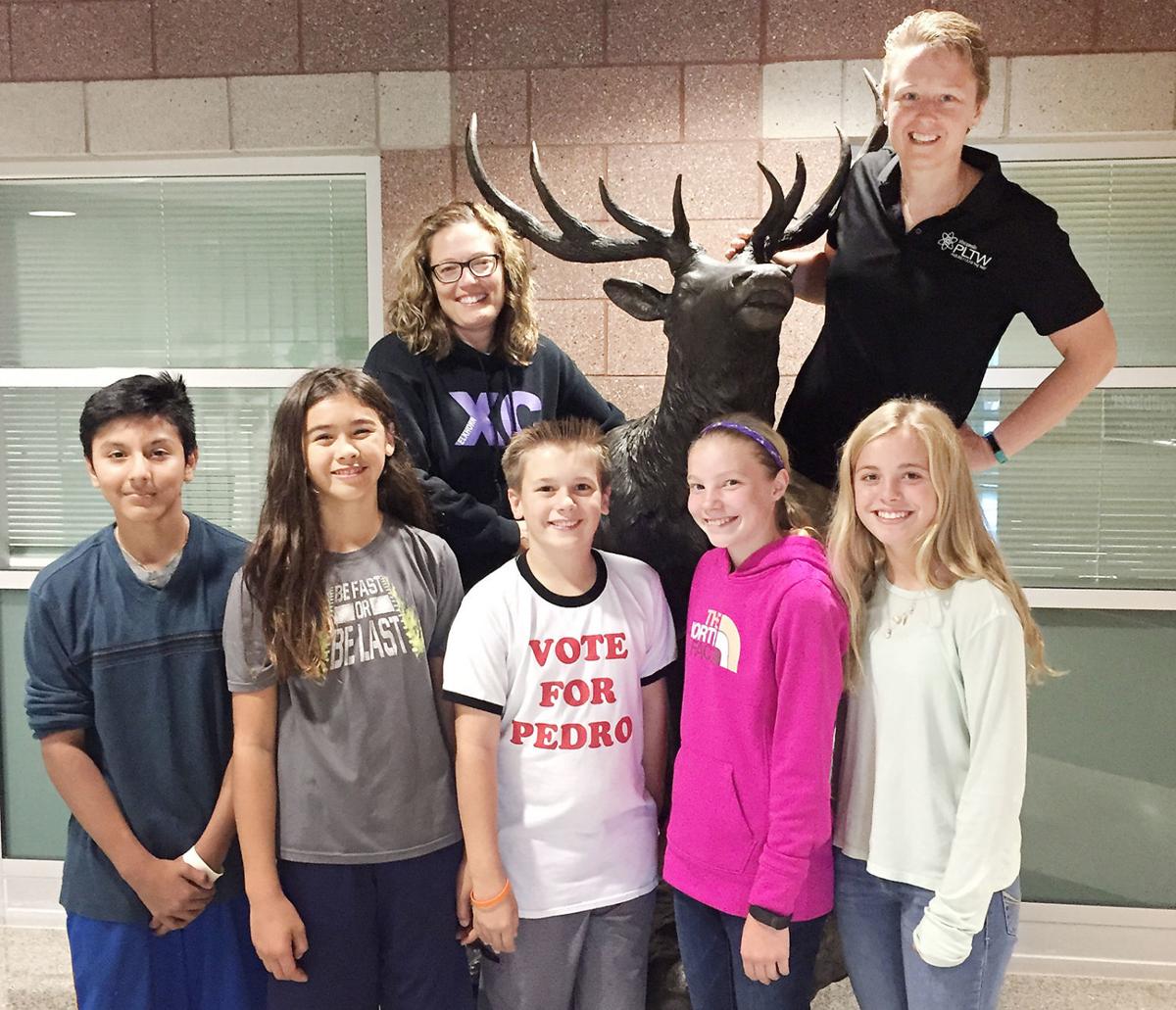 Eighth-grader Aren Gonzales, 13, takes a seat between friends as she arrives at her science class at Elkhorn Area Middle School on a recent Monday. Gonzales participants in Elkhorn’s Project Lead the Way and recently attended a national conference. She credits the program and her STEM-related classes for piquing her interest in applied sciences.

Eighth-grader Aren Gonzales, 13, takes a seat as she arrives at her science class at Elkhorn Area Middle School in Elkhorn. Gonzales participates in Elkhorn’s Project Lead The Way program, which encourages students to study the STEM fields of science, technology, engineering and math.

Without her grandpa, Aren Gonzales wouldn’t have an interest in building things.

He had a workshop. He would help her with science projects, including the clichéd science fair volcano. They built a little car once.

“He’s the one that sparked this in my head,” the Elkhorn Area Middle School eighth-grader said.

Gonzales’ grandpa died about four years ago, she said, but she has harnessed that spark to pursue an education in science, technology, engineering and math fields, collectively known as STEM.

Gonzales, 13, was one of five Elkhorn Area Middle School students selected to attend the National Project Lead The Way 2017 summit in Orlando, Florida, at the end of October.

Project Lead The Way is a nonprofit organization that offers programming in computer science, engineering and biomedical science to more than 10,500 schools in all 50 states, according to its website.

While Elkhorn district officials said they are looking forward to expanding and improving their program, the district for years has been recognized for its work with Project Lead The Way. Part of the recognition included being selected as one of a handful of schools across the country to present at the summit.

“We’ve invited them to share their stories to inspire attendees and provide the best practices that can be taken back to other communities to benefit students across the country,” he said.

Gonzales, who lives on a dairy farm, said agriculture has “a special place in my heart.”

When thinking of ways to solve real-world problems, Gonzales kept coming back to the farmers around her.

“A simple fire can wreck it all,” she said. “It’s terrible what happens.”

Barn fires can start after hay bales sit out in the rain. The hay absorbs water, and the added weight compresses the bales. The compression can cause the bales to heat up and potentially ignite.

So Gonzales invented a hay elevator with a thermal sensor. The device can alert farmers when bales of hay are getting too hot, thereby preventing a fire, Gonzales said.

She said she likes hands-on learning. She prefers the robotics and engineering fields to molecular and biomedical sciences.

Middle school Principal Bryan Frost said one of Project Lead The Way’s strengths is how well it actively engages students. The problem-based materials and activities are different from traditional teacher-led lectures, he said.

The middle school program is called Gateway to Technology, which uses different modules to give students an idea of which paths they could take at the high-school level, Frost said.

Every student is exposed to the modules, he said. That universal exposure gets people from more diverse backgrounds involved in STEM fields.

Other schools offer those programs as extracurriculars, but Frost said students with transportation or financial barriers might miss those opportunities.

Exposing students to the fields early on can also break down existing gender gaps in STEM fields, said JoAnn Struwe, a Project Lead The Way-certified computer science teacher at the middle school.

She said the program is “breaking down” the stereotype that women shouldn’t be engineers or computer scientists.

Gonzales said she’s aware of the shortage of women in engineering, but she said they make good engineers because “we see the little things.”

Gonzales was struck by seeing students from across the country discussing the same curriculum she was learning in Elkhorn.

“It’s just really neat because in this huge world we all have something in common, and that is engineering and computer science,” Gonzales said. “And that’s just one of the things that can connect us all, you know?

“But I feel like everyone does have potential in being an engineer because we all have different brains and our own ideas,” she said. “That trip made me realize that.”

Struwe was a computer programmer before she became a teacher. She had been “patiently waiting” for the school district to more fully implement computer science education.

As the program reaches students earlier in their academic careers, Struwe said she is seeing girls enter her class with more and more confidence.

Elkhorn has progressed in its implementation of Project Lead The Way, at times using every program its offers.

Struwe said she is teaching sixth-graders what she used to teach eighth-graders.

The computer science world is constantly evolving, and Project Lead The Way is moving with it, Struwe said.

It’s hard for her to imagine where the program will go next. She never could have imagined teaching her classes some of the subjects she’ll be teaching them later this year.

Currently, she’s planning to implement more cybersecurity lessons before her students get to high school.

Frost, the middle school principal, said Elkhorn’s Project Lead The Way programming has developed over time because the district wasn’t afraid to implement pieces one at a time.

Where some districts don’t have the staff to take on new programs, Frost said they have the teachers to “make those programs come to life.”

Frost said Project Lead The Way spawns “wonder” in students, which means they will branch out into more STEM-related extracurricular activities. The middle school has a STEM club and a coding club, and it is working on makerspaces.

Gonzales took advantage of one of those extracurriculars when she was a part of the winning Power Fluids team at a Milwaukee School of Engineering competition, she said.

She was unsure if she wanted to try it, but her mom encouraged her: Why not?

“She was like, ‘Just do it. You never know what’s going to happen,’” Gonzales said. “And it turned out for me really liking it, and we brought home the trophy.”

While her grandpa sparked her interest in these fields, Gonzales said the program and the summit showed her she could turn her interests into a career.

The middle school recently scored a 91.3 out of 100 for on-track and post-secondary readiness on the state Department of Public Instruction’s accountability report card. The state average for schools serving sixth- through eighth-graders is 87.

Gonzales wants to be a civil engineer. She said she wants to make an impact on people’s lives.

“Without PLTW … I wouldn’t think of it as a career,” she said. “There’s so many possibilities for me to be making anything.”

For “inspiring the next generation of innovators,” Elkhorn Area Middle School teacher Eryca Card was one of six national 2018-19 Project Lead The Way Outstanding Educational Leaders.