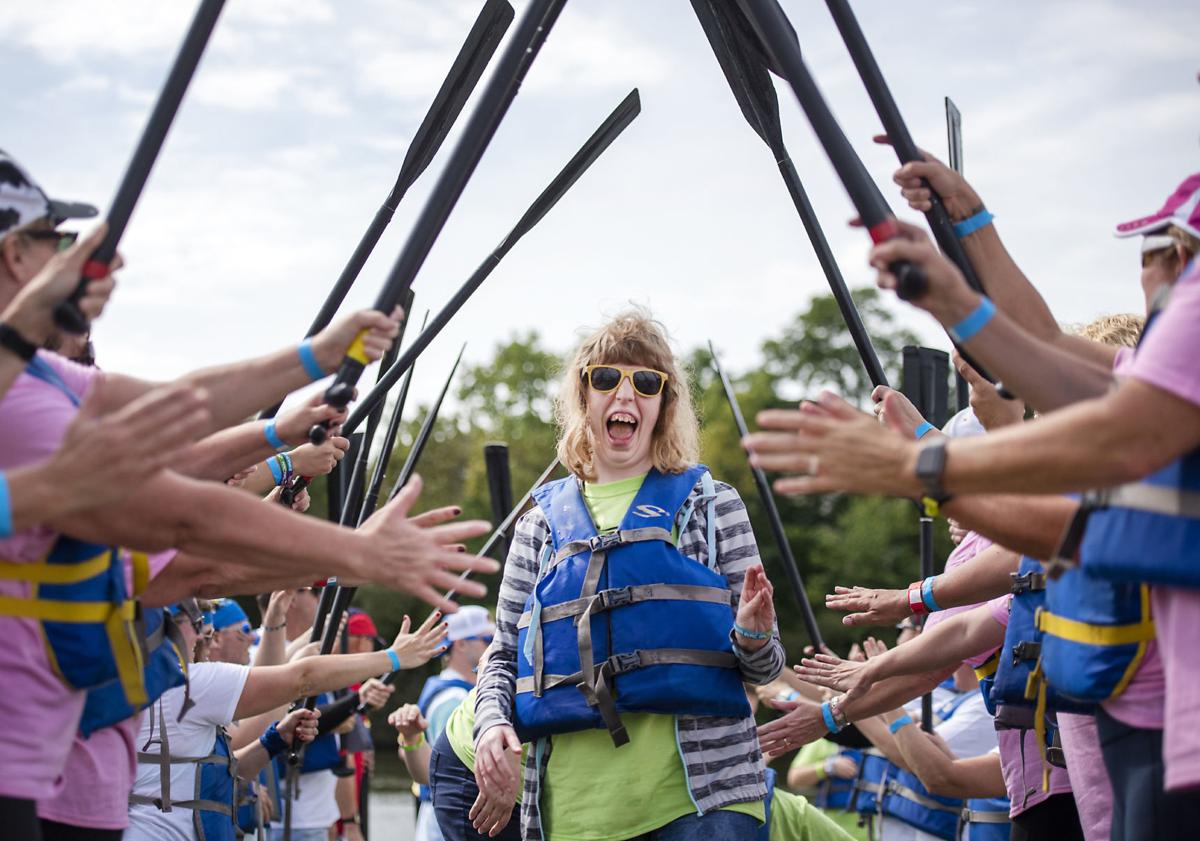 Melissa Kerry, a member of the KANDU Industries dragon boat racing team, is greeted by high-fives from competitors after the boat race Saturday, Sept. 14, 2019, at Traxler Park in Janesville. 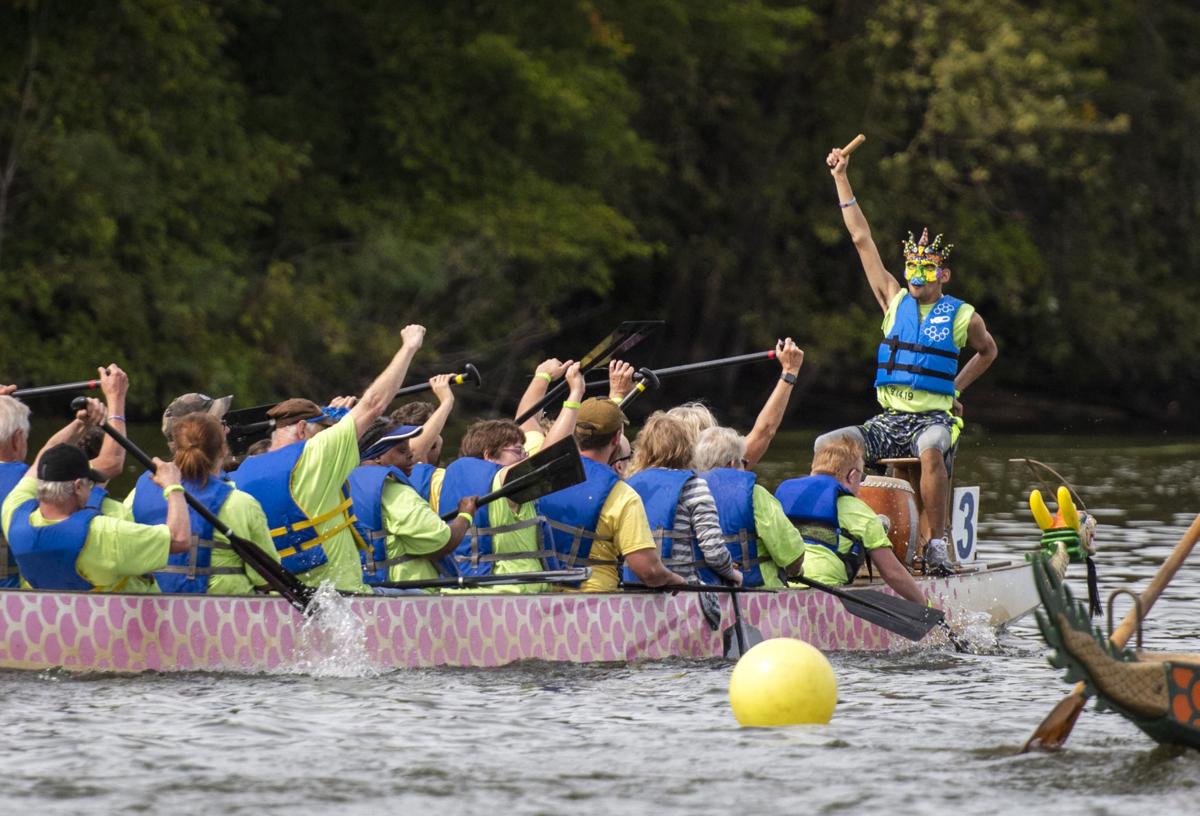 Michael Blanca, the drummer for the KANDU Industries dragon boat racing team, raises his drum stick in the air after winning the boat race Saturday, Sept. 14, 2019, at Traxler Park in Janesville. 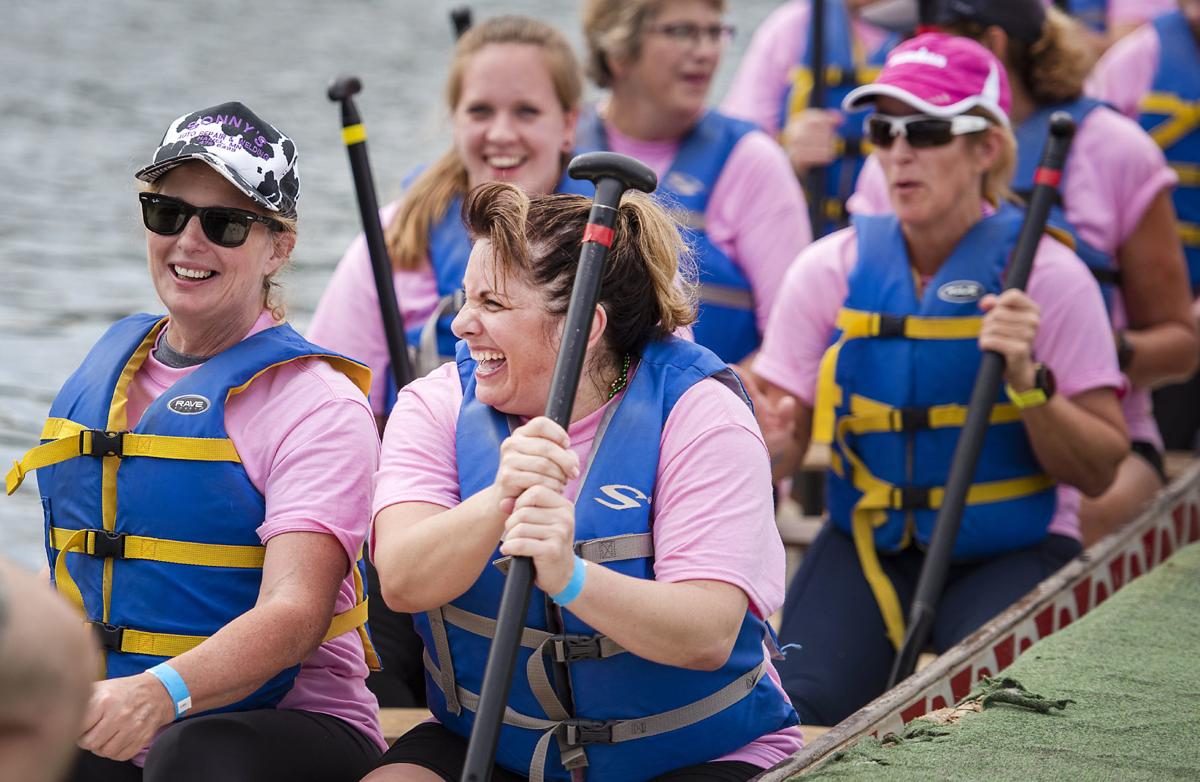 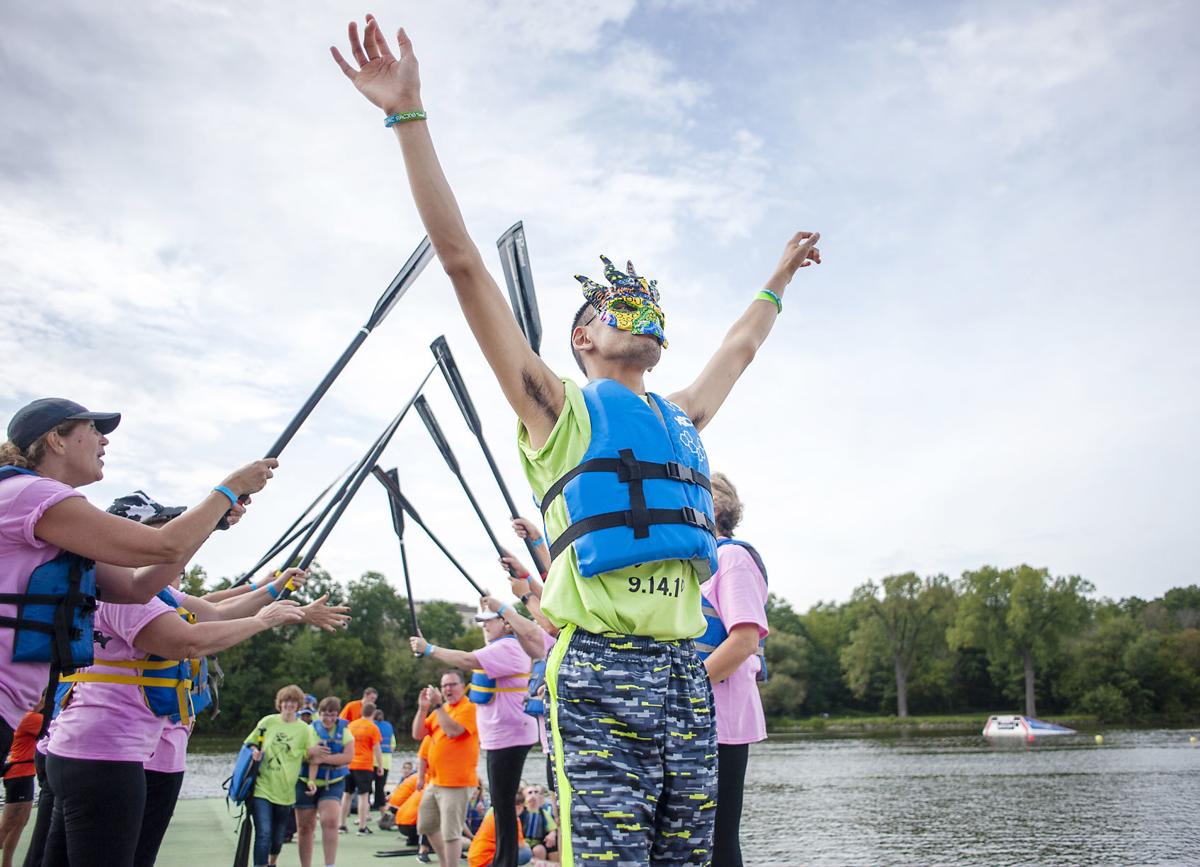 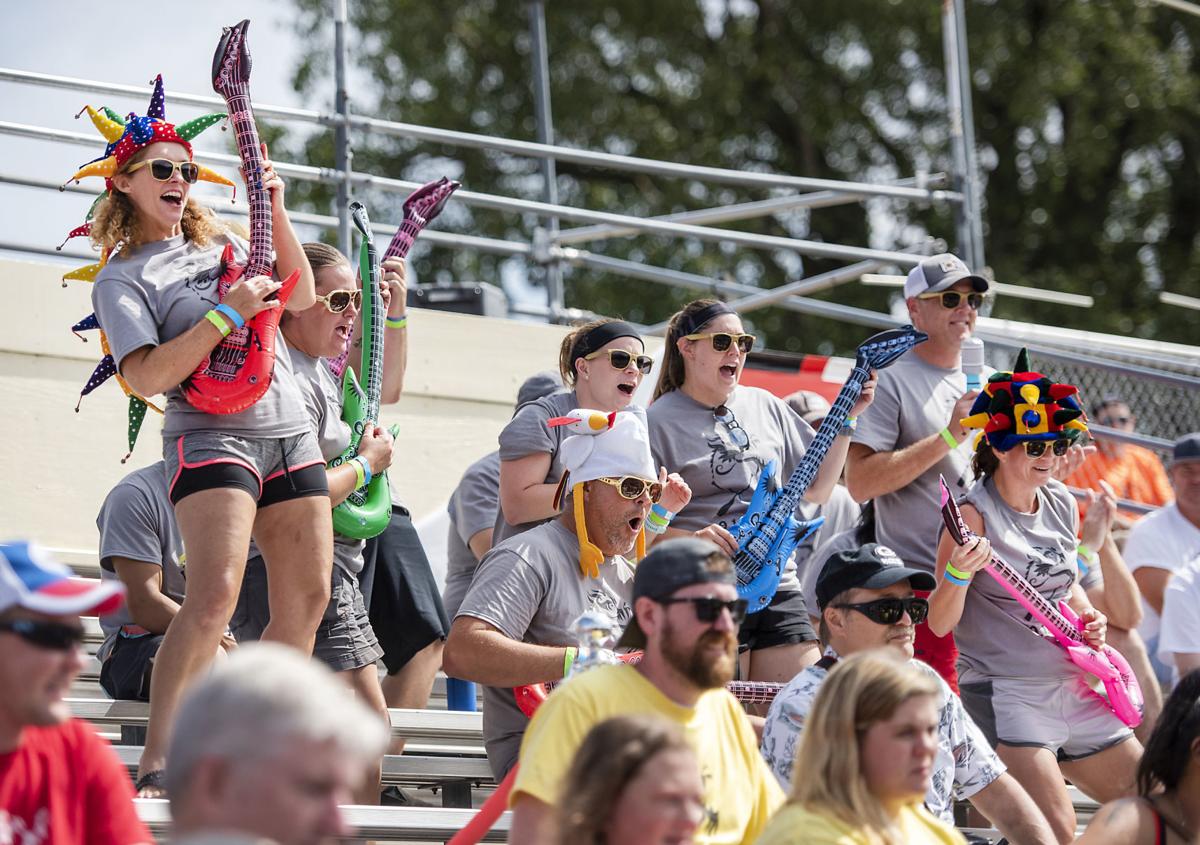 The team “Rock and Row” play air guitar in the stands as their drummer competes in a drumming competition Saturday, Sept. 14, 2019, at Traxler Park in Janesville. 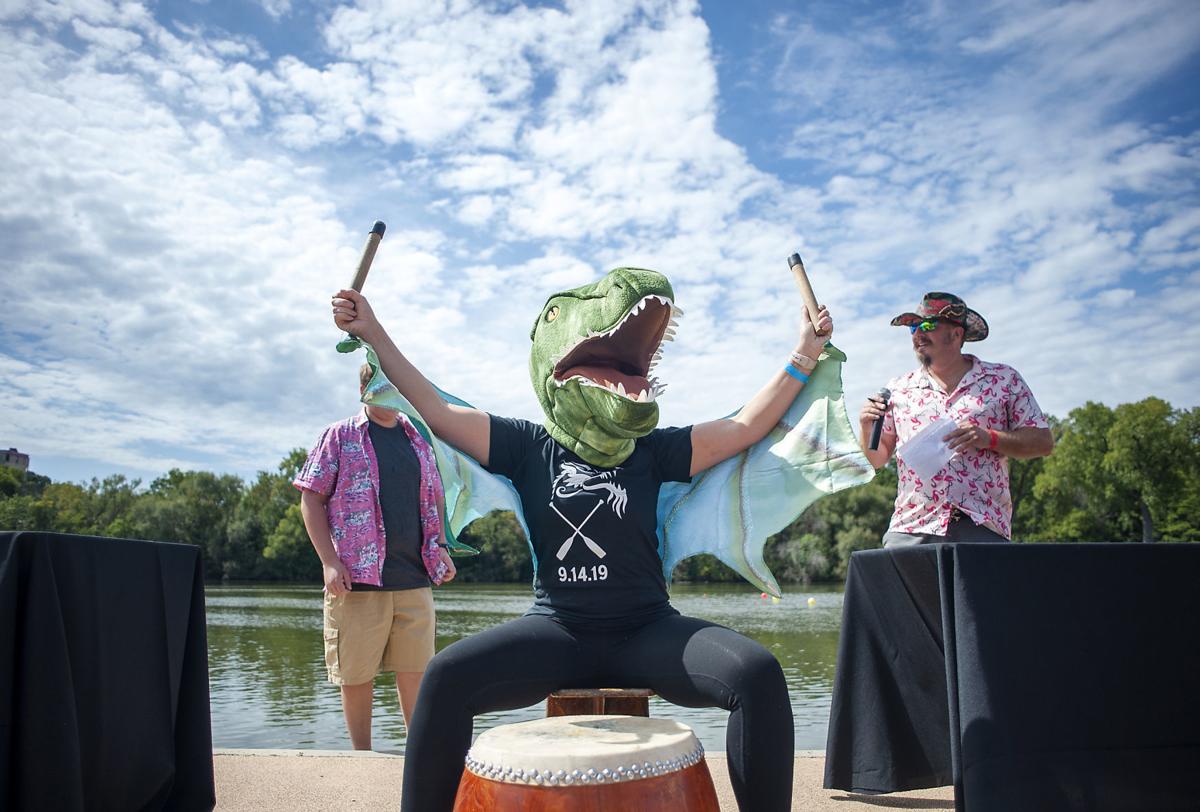 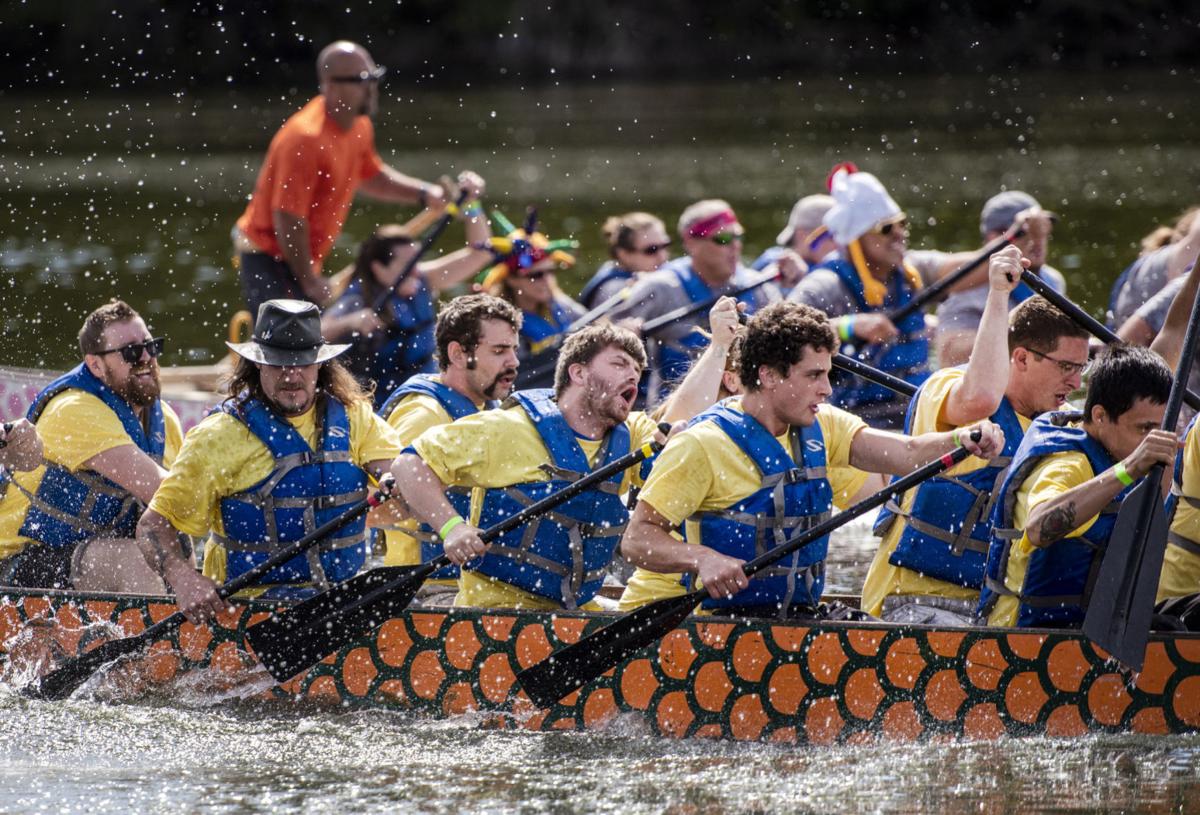 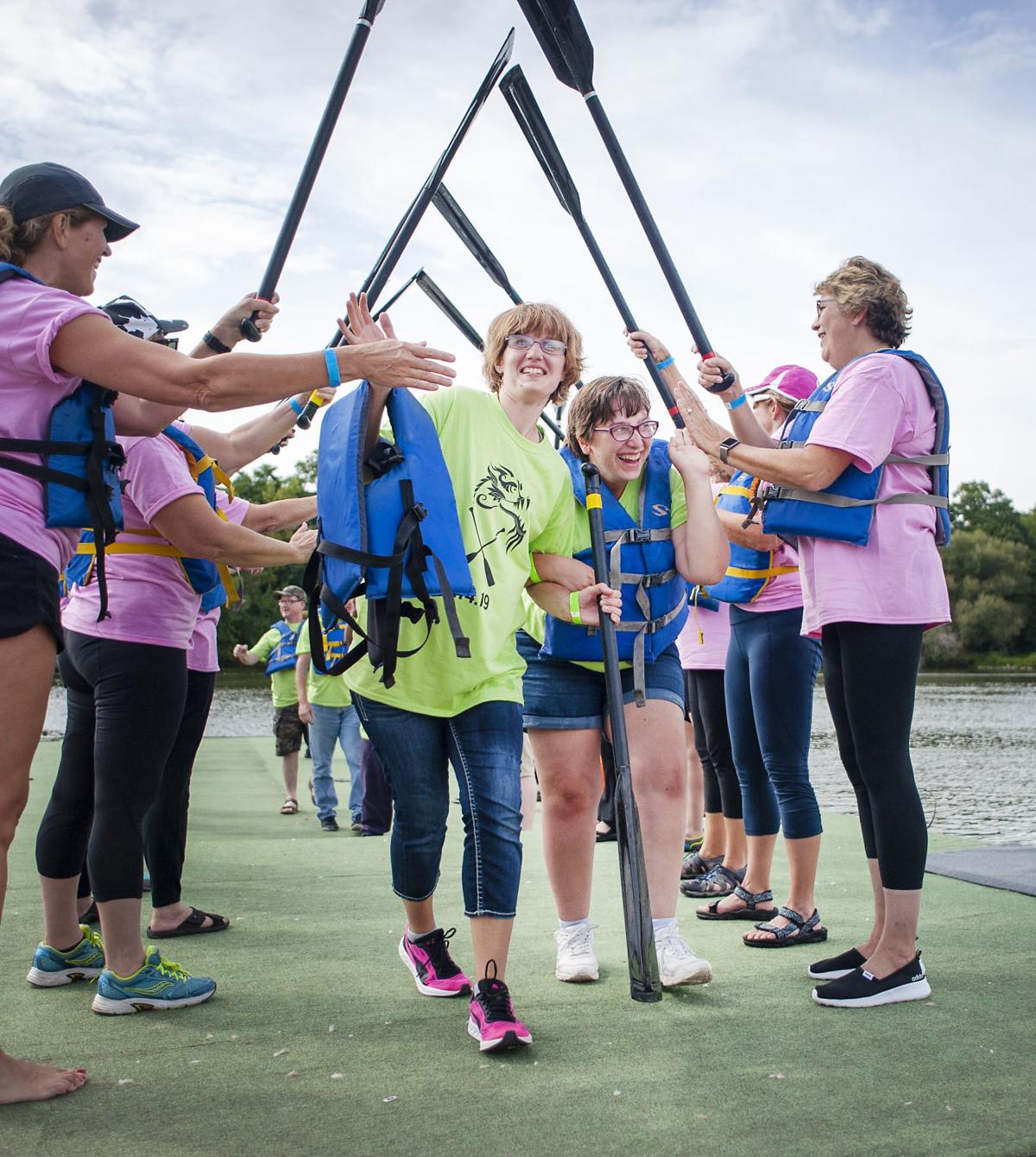 Georgia Wilson, left, and Robin Ames, right, get high-fives from their competitors after participating in the dragon boat race with the KANDU Industries team Saturday, Sept. 14, 2019, at Traxler Park in Janesville.

Melissa Kerry, a member of the KANDU Industries dragon boat racing team, is greeted by high-fives from competitors after the boat race Saturday, Sept. 14, 2019, at Traxler Park in Janesville.

Georgie Wilson had never been on a boat of any kind until Saturday.

During her first day on the water at Traxler Park, she was one of 20 paddlers who won a heat in Janesville’s first dragon boat races.

As the victors walked off the dock, other competitors lined up and formed a tunnel with their paddles crossed overhead to welcome them.

Minutes later, Wilson discussed what surprised her on her first venture on the water, “boat tipping.”

Wilson learned the importance of stability in a canoe-like, 46-foot-long dragon boat, but no boat tipped over, and it appeared no one fell into the water during the races. Although most of the 250-plus competitors got wet.

“I was so happy about winning. When they said KANDU Kukulkans won first place, I was, like, ‘Yeah! Joy!’” said the 29-year old from Orfordville.

A kukulkan, of course, is a Mayan feathered serpent deity.

And dragon boat racing comes from China, where races are held to celebrate the ancient poet Qu Yuan.

And KANDU is the name of the local nonprofit organization that has been helping developmentally delayed residents such as Georgie live fuller lives for more than 50 years. The organizations says it now serves 235 clients daily.

KANDU’s workshop employs its clients by bidding for work such as affixing labels on more than five million jars of salsa for Hormel this year, said Gary Bersell, the retired KANDU Industries executive director and one of Georgie’s crewmates.

KANDU also offers day-support services and supports employment for its clients in the community. It might be best known for its Best Events Catering division.

The money raised Saturday makes KANDU a winner, as well.

The United Way-supported organization’s budget balances only if raises about $500,000 each year, Bersell said. Its overall budget of about $10 million includes about $2.9 million in government grants, and the rest is from KANDU’s money-making ventures, Bersell said.

KANDU has held a golf outing for its annual fundraiser for years but this year hired a company that brings in the 46-foot-long dragon boats along with experts to instruct each team and others to run the event.

“What a great day. This is fun. I hope they make a lot of money,” said Larry Barton, who was on a team of friends called The Dragonflies, who might have been the oldest racers among the 12 teams. Team members calculated their average age at 66.

KANDU’s interim executive director, Sue Conley, said the goal was to raise $20,000, and it was too early to know how much was raised.

Conley said the event will likely be held again next year.

She said the dragon-boat company told her the number of teams usually triples in the second year, which of course brings in more money.

By the way, let it be known that the overall champion Saturday was the Mercyhealth team, which won by about the length of the prow-mounted dragon head, followed by Oar We There Yet from Data Dimensions and the Johnson Financial Group.

“It’s fun. It’s cool. We were scrambling to get the full team at work, but I’m glad we did it,” said Data Dimensions worker Justin Cisewski, who said the fun was a great way to build teamwork among coworkers.

The event benefited from a sunny, warm day and attracted hundreds of spectators.

The expansive grassy parking areas were nearly full in the early afternoon as fun was being had by just about everyone.