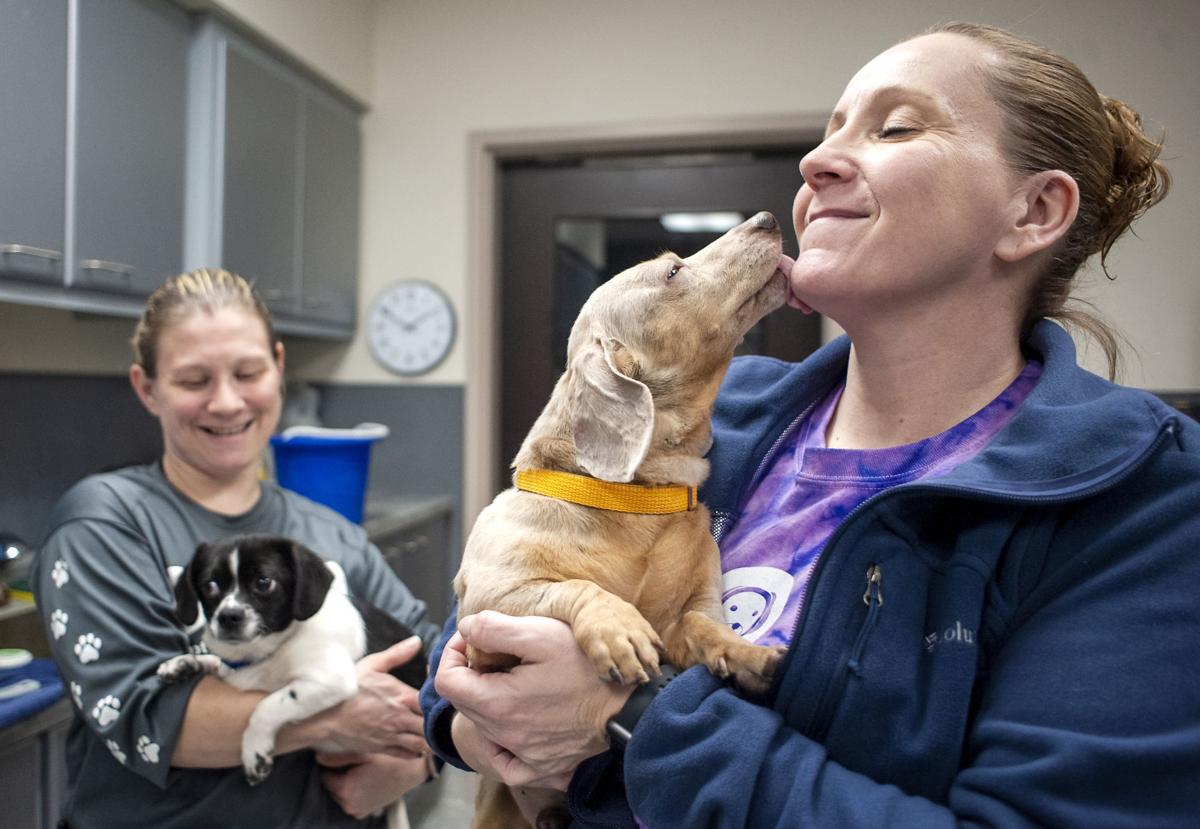 Dexter, one of two dogs who were found emaciated in the Delavan Walmart parking lot in November, kisses Operations Director Teresa Robelia, right, as Tiffini Heim, her assistant, holds Berry on Monday at Lakeland Animal Shelter in Delavan. The two dogs are available for adoption and must be adopted together. 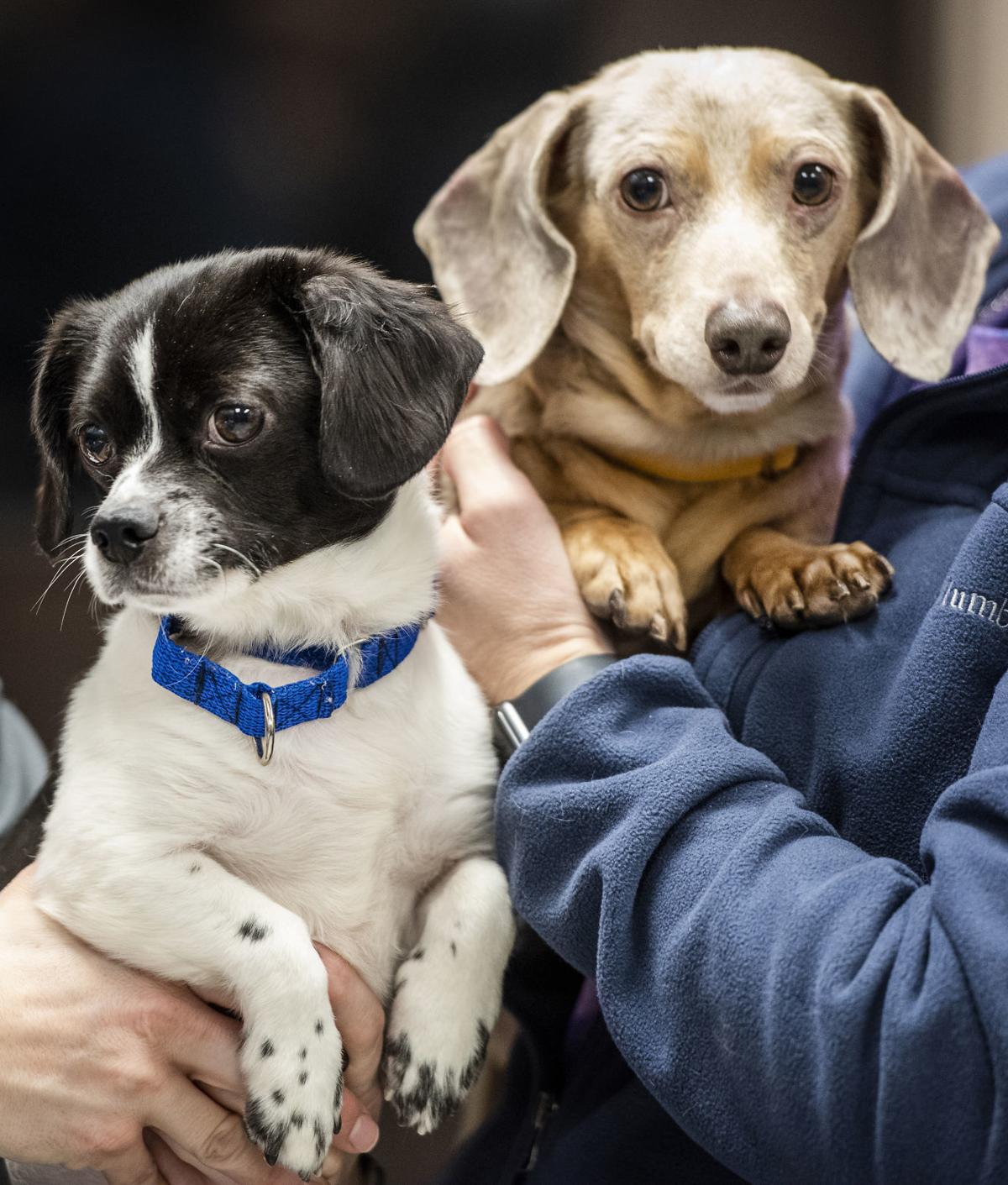 Berry, left, and Dexter, shown Monday at Lakeland Animal Shelter in Delavan, are now available for adoption. The dogs were nursed back to health after they were found wandering in the Delavan Walmart parking lot. 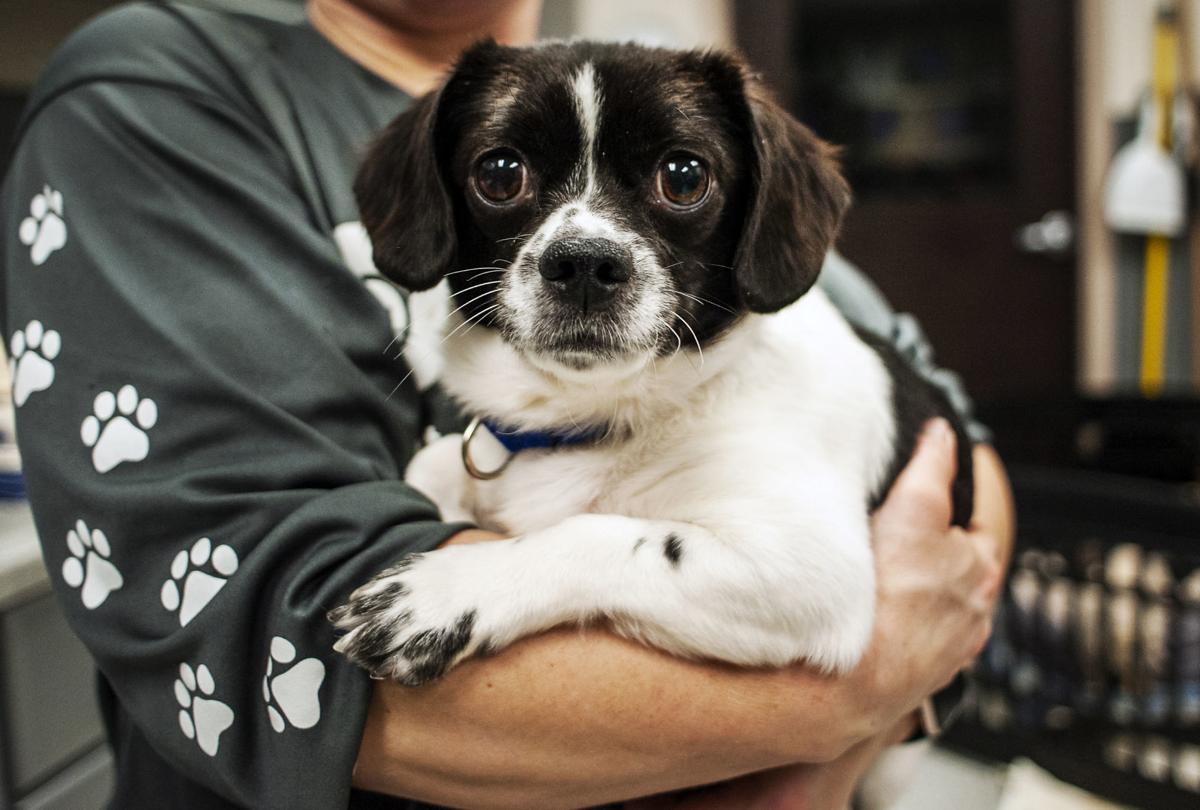 Berry is one of two dogs who were found in a Walmart parking lot. He’s being held by Tiffini Heim of Lakeland Animal Shelter in Delavan.

Dexter and Berry, two dogs found abandoned and malnourished in a Walmart parking lot in late November, are healthier after extensive treatment and are now available for adoption from Lakeland Animal Shelter.

Shelter Director Kristen Perry said Monday the staff has received some applications and is accepting more in hopes of finding the “right match” for the two dogs, who must stay together.

In a video the shelter shared Friday on Facebook, Dexter, a Dachshund, and Berry, a Doxie-Chin mix also known as Blackberry, are seen energetically wagging their tails, bouncing around with toys and getting belly rubs.

The dogs came to the shelter about six weeks ago in much different condition.

They were “extremely emaciated” when they were found in the parking lot of the Delavan Walmart on Nov. 28, according to the criminal complaint charging an Elkhorn man with leaving them there after he took them in months earlier after a divorce.

Jeffery M. Freund, 48, of 270 W. Centralia St., pleaded not guilty Monday to two counts each of mistreating animals and intentionally abandoning animals, as well as a single count of obstructing an officer, court records show. He’s next due in court at 1:15 p.m. Feb. 10.

Complaint: Dogs found in parking lot were healthy before Elkhorn man had them

Under the shelter’s care, Perry said Dexter and Berry had a “regimented” eating schedule—a low-fat diet with feeding every two hours.

When they first came to the shelter, Dexter and Berry weighed 8 and 5 pounds, respectively, the Facebook post states. They recently checked in at 13.3 and 10.9 pounds.

Some exercise was allowed, and officials repeatedly checked the dogs’ bloodwork.

While the case had “unique” elements, Perry said in the last two months staff has seen seven other cases of severely neglected dogs with overgrown fur and nails, flea infestation, and jaw disintegration from infections.

Perry said it took a team of people to get Dexter and Berry as healthy as they are today, ranging from community support through donations to the veterinary care through the Lake Geneva Animal Hospital.

Over the last several weeks, Perry said shelter officials have noticed how Dexter and Berry do not like to be separated for various procedures.

“It’s very clear that they want to stay together,” she said, adding that’s why they are looking for a home that will accommodate them both.

Those interested in applying can go to lakeland animalshelter.org and fill out a dog adopter profile. Perry said Dexter cannot be with cats, and the duo probably prefer to be the only pets—although that was “not set in stone.”

She said the process usually takes about a week or so, but it depends because the shelter always tries to find the best fit.

“They’re fun, playful little guys. It’s been really neat to get to know their personalities,” she said. “And now that they’re not worried about where their next meal is coming from, you get to see how they are.

“Whoever adopts them is going to be pretty lucky to be able to have them.”