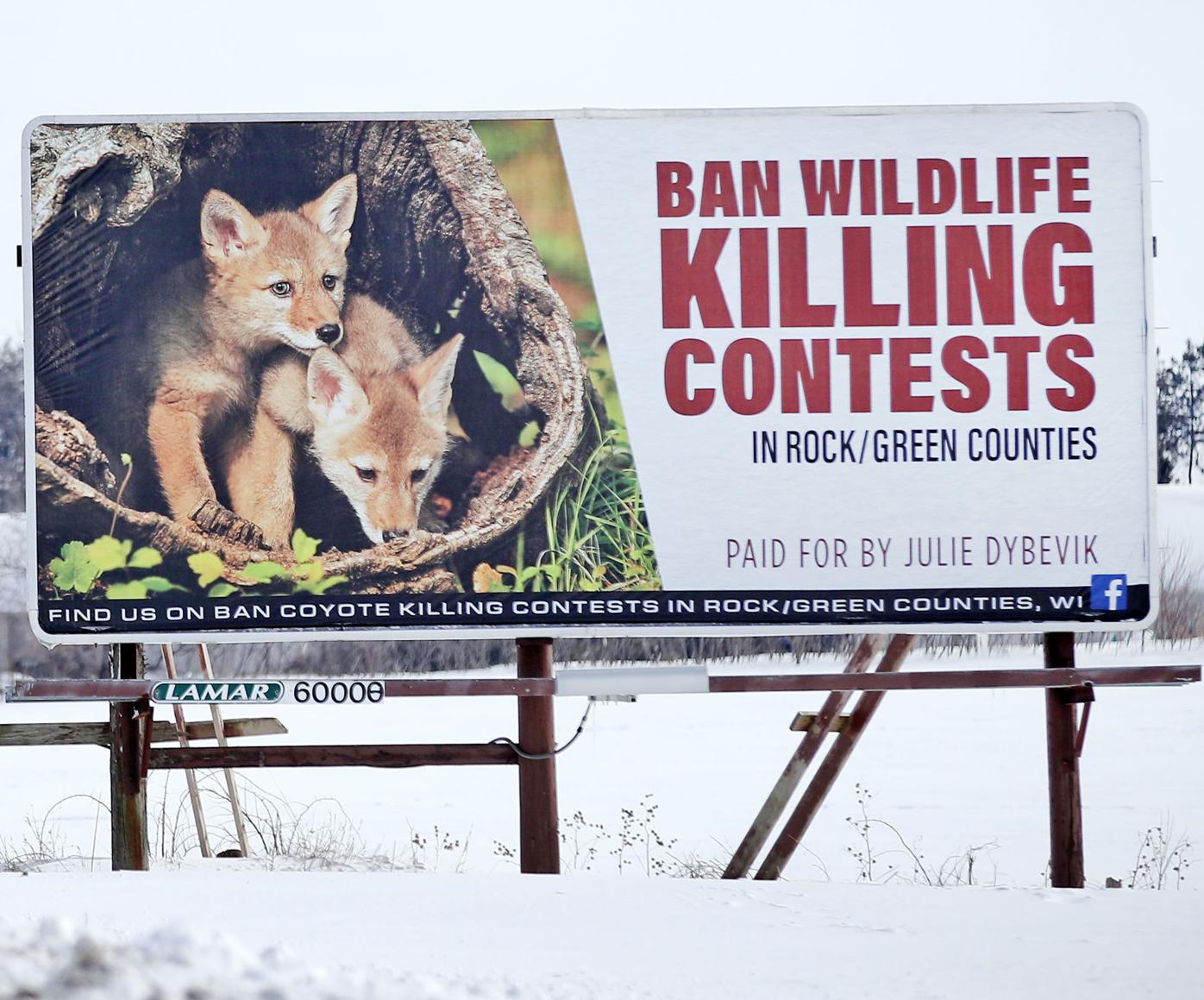 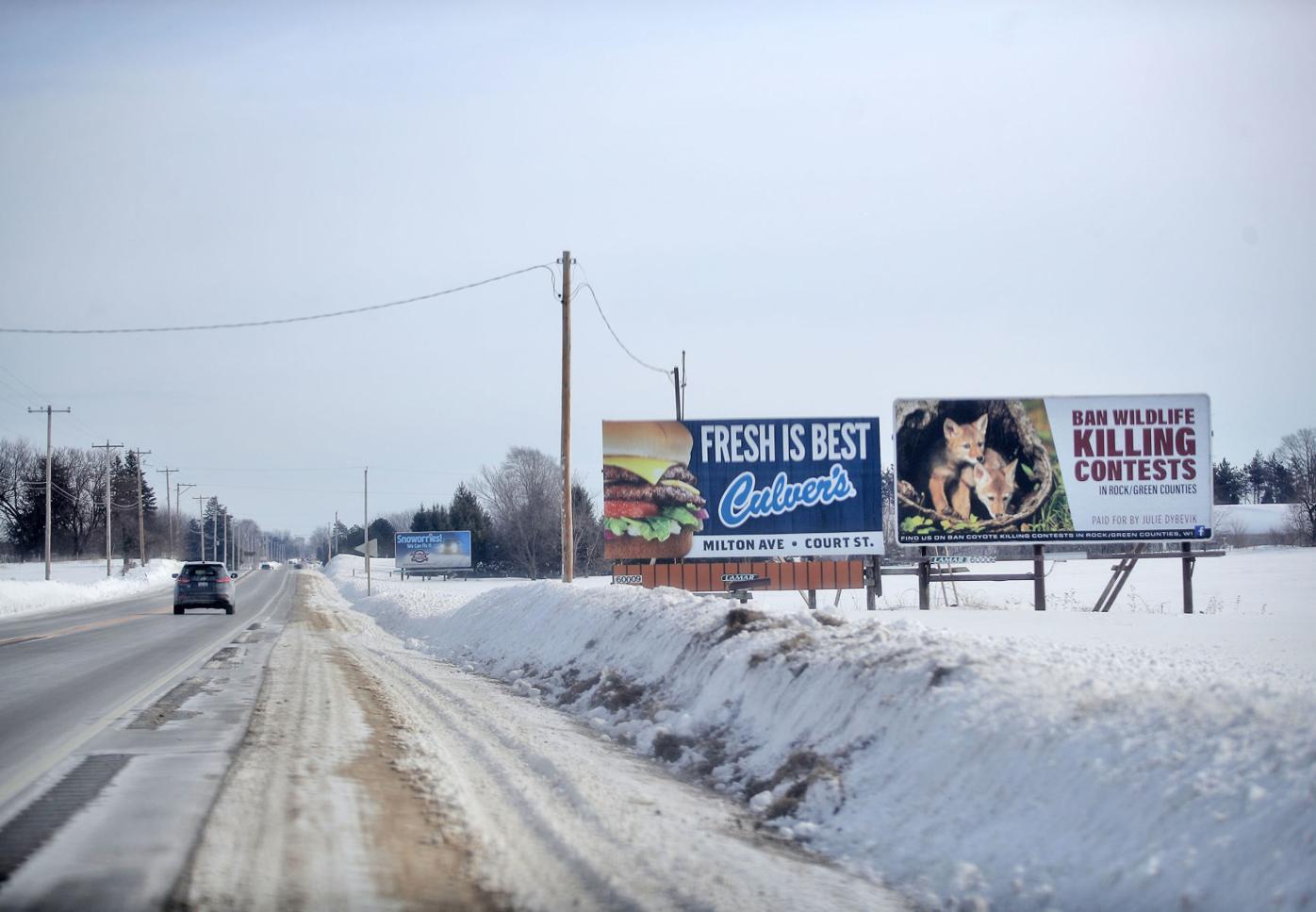 A billboard that asks for a ban on ‘wildlife killing contests’ stands along Highway 14 west of Janesville. 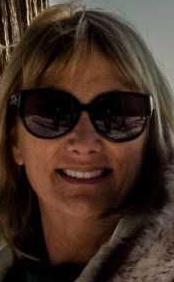 A billboard that asks for a ban on ‘wildlife killing contests’ stands along Highway 14 west of Janesville.

With the major hunting seasons ended, this is the time of year when some taverns host coyote-hunting contests.

Hunters vie for prizes for bringing in the most coyote carcasses.

They sometimes pose proudly for photos with the carcasses arrayed in front of them.

It’s a cruel, disgusting blood sport, says Julie Dybevik, a nature photographer and former veterinary technician who has spent much of her life in rural areas of Rock and Green counties.

“They’re not hunters. They’re killers,” Dybevik said. “These contests are to kill as many animals as they can. That is the reason for killing contests, so they can get their cash prizes or a new rifle.”

People don’t understand rural culture and the need to protect pets and livestock from coyotes, says Rock County farmer Jeremy Book, who has hunted coyotes all his life in the area.

“Whether there’s a contest or not, those coyotes are going to be just as dead,” Book said.

The Gazette contacted three tavern owners about the contests. Two declined to talk. One did not return calls.

Book said the contests are opportunities to get together with friends, and he noted that some taverns donate proceeds from the contests to causes such as the Beloit-based VetsRoll.

Book said opponents often grew up in cities, have never seen what a coyote can do to an animal and don’t understand why people want to keep coyote populations down.

Dybevik said hunting coyotes with dogs is particularly cruel, as dogs will chase the coyote for miles until it’s exhausted and keep it at bay until the hunter takes a shot. And dogs are trained to be vicious, she believes.

“Most hunters I know are very respectful of animals. They want a quick death,” Book said. “We really don’t take joy in watching an animal suffer. I never have. If I’m going to dispatch something, I want it to be quick and painless as humanly possible. Obviously, it doesn’t always happen that way, but we do our very best.”

Book said few in this area hunt coyotes with dogs.

“I’m not going to say anything bad about guys that hunt with dogs because in the long run, I’m next. As soon as they outlaw dogs, they will go after those who track and walk 12 miles a day,” Book said.

Dybevik has been upset about the contests for years. This year, she decided to do something about it. She created a Facebook page Dec. 19, calling it BAN Coyote Killing Contests in Rock/Green Counties, WI. She spent $745 on a billboard calling for a ban along Highway 14 west of Janesville.

The issue raises passions on both sides. Dybevik asked that her hometown not be listed in this article. She recently received a message telling her “you’d better mind your own business” and one suggesting vulgar things about her. She feels threatened.

Book asked that his farm’s location not be identified. He worries that animal-right activists might show up and disturb his livestock.

“There’s a lot of really crazy people out there that do some stupid stuff,” Book said.

Dybevik said she has never been a member of People for the Ethical Treatment of Animals, or PETA, which sometimes gets tagged with the “extremist” label.

“I drink my milk and eat my cheese. I think PETA goes overboard,” Dybevik said. “This is a legitimate campaign I’m involved in.”

“Farmers are wonderful, and we need them, and it breaks my heart small farms are disappearing from Wisconsin,” she said.

A way of life

Book said he’s been hunting coyotes most of his life. He says he is protecting his and his neighbors’ livestock, and he wants to protect fawns, which coyotes could prey on.

The state Department of Natural Resources has thinned the deer herd in his area, Book said, “and if the coyotes are taking a bunch of my fawns, my deer herd will never grow back up. …

“They don’t have to be wiped off the face of the planet, but they have to be managed. There’s no shortage of them, that’s for sure,” he said.

Dybevik is not a lone voice on this issue. Her Facebook page has 75 followers. Organizations such as Project Coyote agree with her. Seven states have banned wildlife-hunting contests. A bill proposed in the Wisconsin Legislature in 2019 went nowhere.

Dybevik and other coyote advocates say hunting coyotes out of an area will only stimulate higher birth rates, and the populations will come back stronger than ever.

Rossler said coyotes will return to areas after they’ve been eliminated, and plentiful food leads to higher birth rates.

Book agrees the ecosystem needs coyotes to stay in balance. “However, the population of coyotes is unnaturally high because they don’t have a predator other than us anymore,” he said.

Book said he doesn’t like people posting photos of themselves grinning with their kills, which he says puts all hunters in a bad light.

But he said his neighbors tell him coyotes have grabbed their chickens and welcome him to hunt the canines. Another neighbor’s heifer was killed by coyotes, he said.

Rossler said coyotes are opportunistic and will prey on pets as well as smaller livestock, such as lambs or calves and maybe heifers.

For those with pets, “We suggest to people that if they know coyotes are in the area that they be vigilant and that they go out with the animal when it’s going to the bathroom,” Rossler said.

Dybevik said a 40-pound coyote wouldn’t attack large livestock, and she never saw coyote damage to livestock when she worked as a large-animal veterinary tech.

“It’s just an excuse to go out and kill. It’s 2021. There’s hardly any cattle in pasture anyway, and the coyotes’ main diet is rodents and small mammals,” Dybevik argues. “If you’re going to have pets and live in the country and coexist with wildlife, take care of your pets. Be responsible.”

Rossler said people with opinions on the topic can register those through the Wisconsin Conservation Congress’ spring meetings, which feeds into the DNR rule-making process.

“I support anyone that hunts them, shoots them. People don’t realize how many are out here because normally they come out only at night,” Mageland said.

He added that coyotes come out during the daytime at this time of year because it’s mating season.

“You’ve got to keep them in check, just like the deer,” Mageland said.

Like many hunters, Mageland sells the pelts, which are often used to make hats or fringes around the hoods of parkas.

Dybevik said hunters have been known to dump the carcasses, which leads to lead poisoning of eagles that feed on the carrion.

Dybevik notes that researchers have linked cruelty to animals to violence to other human beings.

“Violence towards animals is a strong predictor that the abuser may inflict violence on people. However, it must not be assumed this is always the case,” according to one study published by the National Institutes of Health.

“There is ethical hunting,” Dybevik said. “This is unethical killing. I know the deer hunting will never change, but these contests have to stop. We’re not cavemen anymore. We’re better than this.”