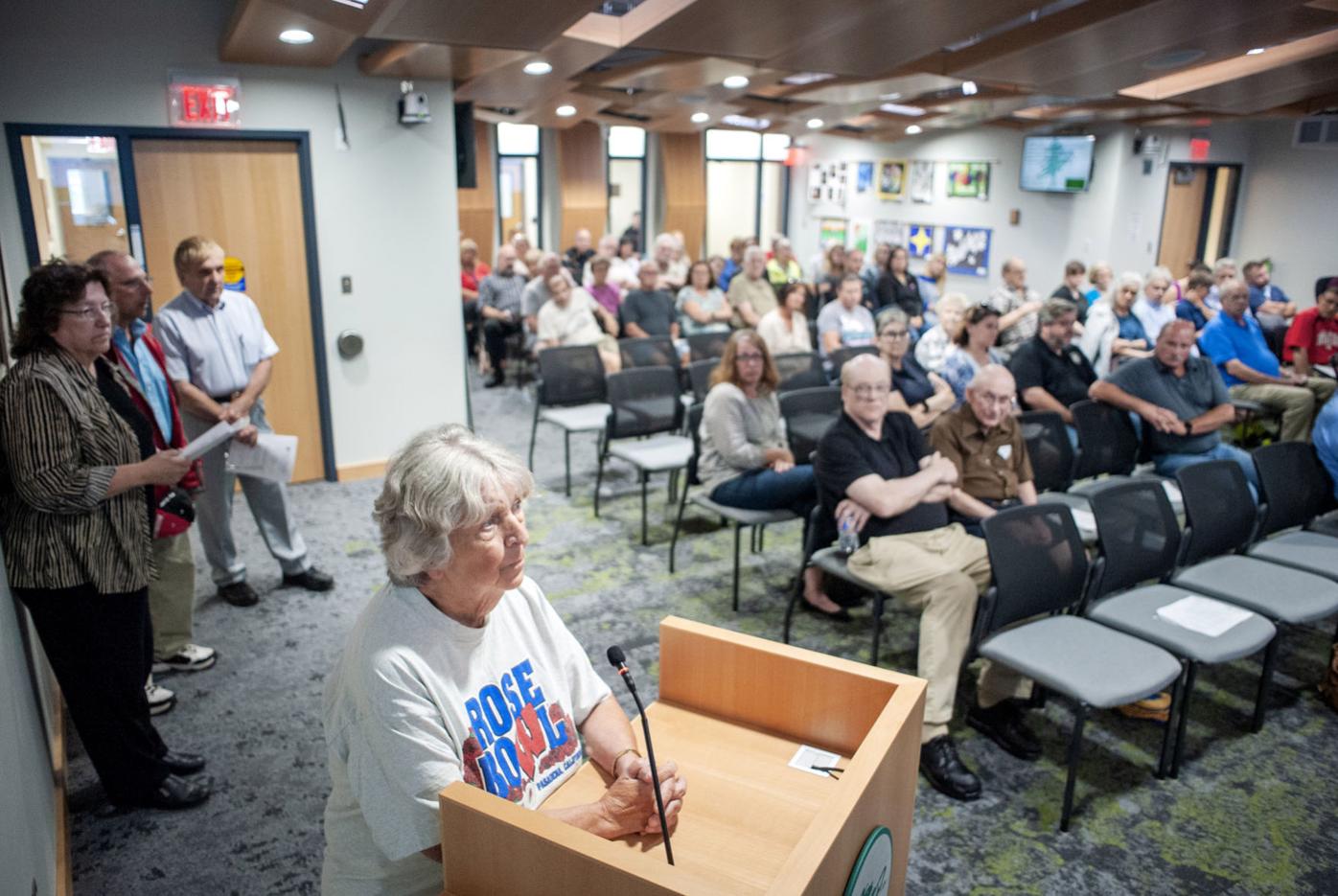 ECHO Board President Nancy Hansen-Bennett speaks Monday about the proposed homeless parking ordinance at City Hall in Janesville. An amended proposal that specified the boat launch parking lot north of Traxler Park would be the site where people could park overnight passed the council 6-1. 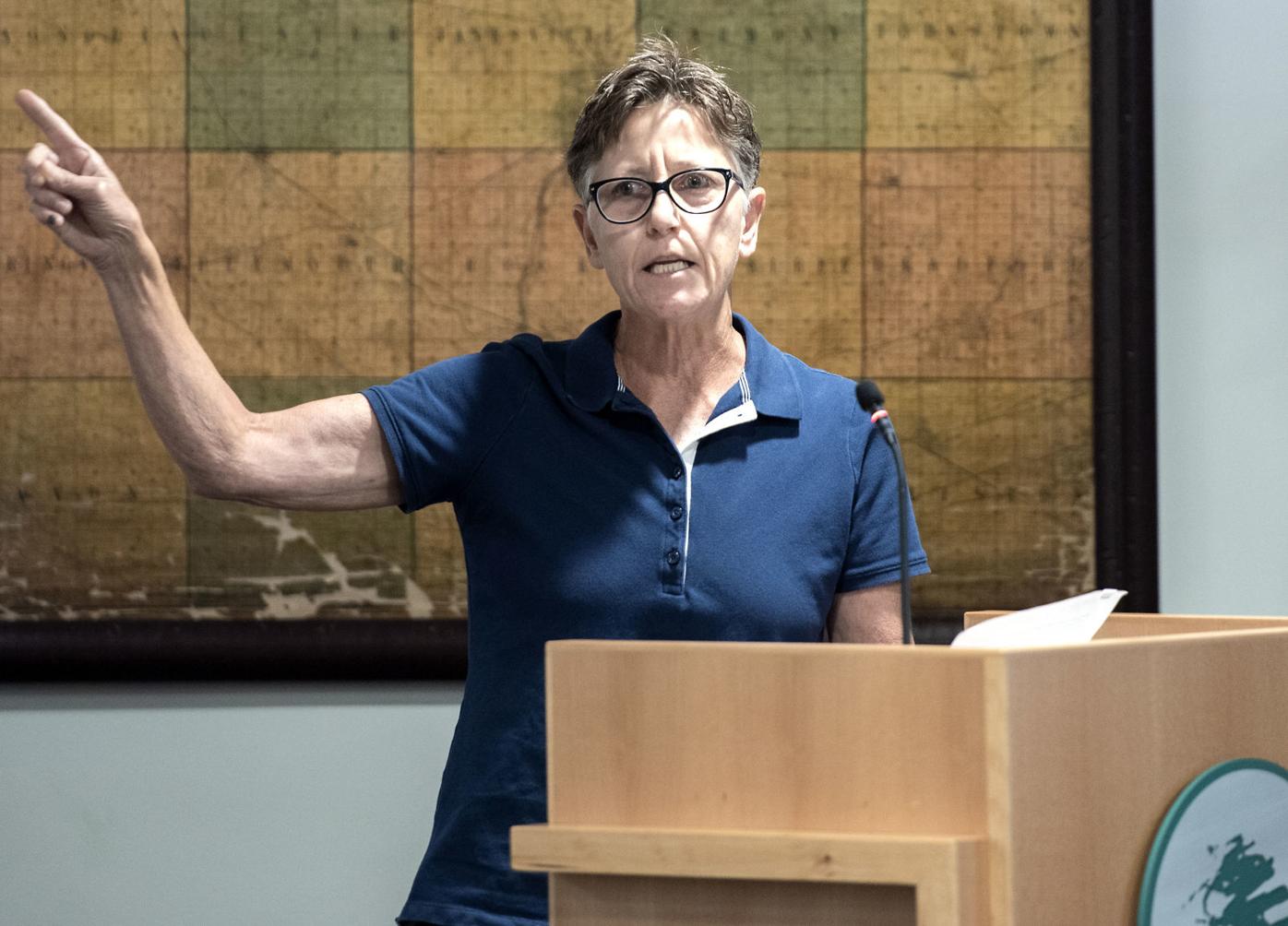 Janesville resident Dawn Endl speaks to the city council about her opposition to the parking ordinance Monday at City Hall in Janesville. 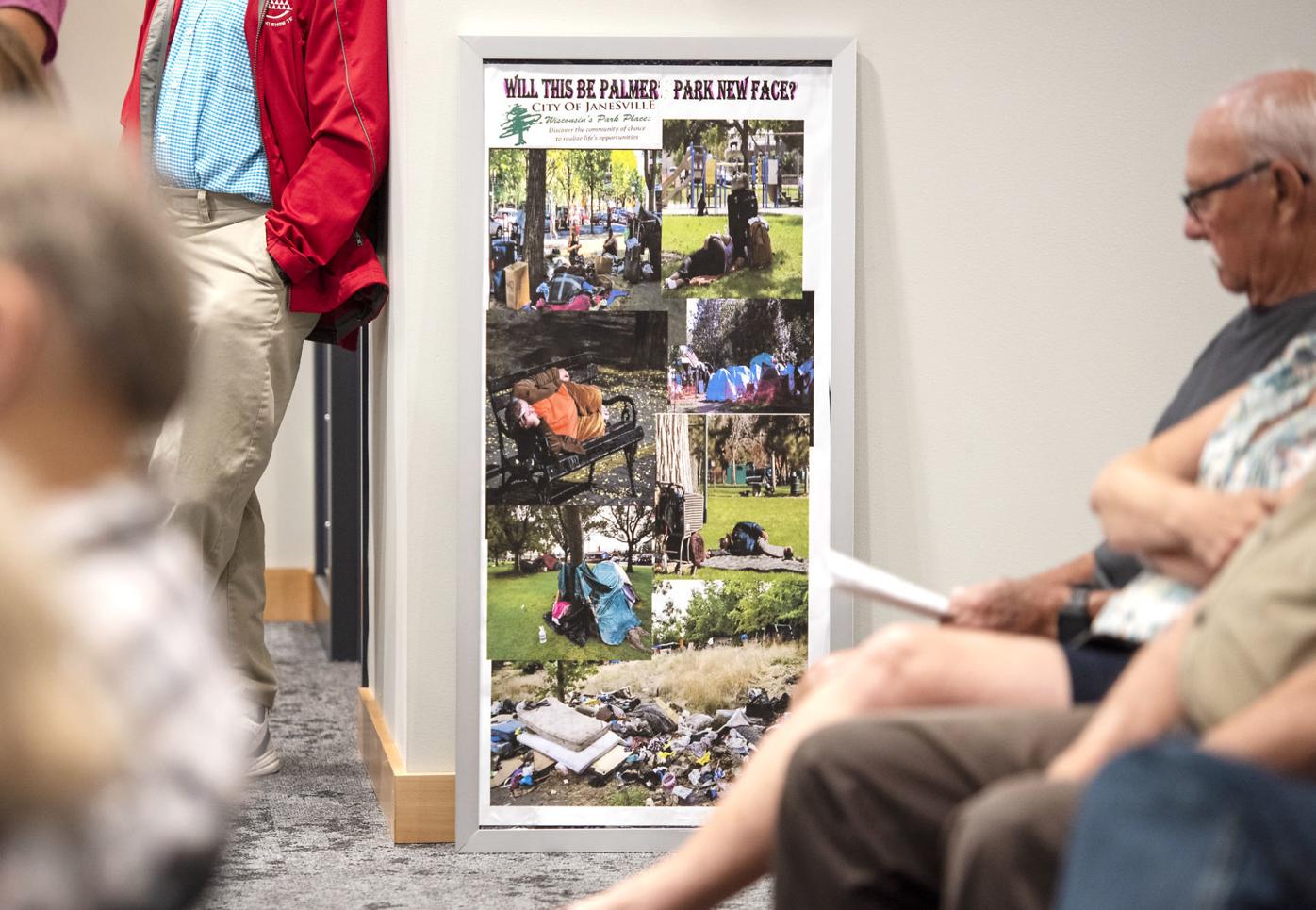 A poster leans against a wall at City Hall during Monday’s city council meeting where the council discussed a proposed ordinance to allow overnight parking.

Homeless residents will be allowed to sleep overnight in their vehicles through the end of October—but not at the original proposed location in Palmer Park.

The city council amended the proposal Monday so the location would be Traxler Park’s north boat launch parking lot located off Sherman Avenue north of the Memorial Drive bridge.

After the motion was amended, the council passed the proposal, 6-1. Paul Williams voted against it.

The ordinance change will be valid from Aug. 1 through Oct. 31. After that, the city would spend the next two months compiling a report analyzing the program.

Several dozen people filled the council chambers Monday night as the controversial topic finally came up for a vote. The ordinance was originally introduced to the council in May after City Manager Mark Freitag first mentioned it publicly in his State of the City address in January.

More than 20 people spoke during a public hearing that lasted roughly 80 minutes. The council then debated the issue for another 50 minutes.

Public opinion was mixed, just like it was at a June 26 community forum and a July 9 parks and recreation advisory committee meeting.

Resident Dawn Endl opened the hearing by saying she supported safe parking programs that would include registration and other requirements. But she was “frankly embarrassed” by the current proposal and said it could backfire on the homeless community.

Ed Pulliam followed Endl’s remarks by saying those opposed likely had some degree of NIMBYism—“not in my backyard.” If there were safety problems, the city had the authority to tweak or halt the program, he said.

Others suggested more locations—the parking lot across from the police station, the parking lot by ECHO—to move the program out of a park. Many have repeatedly said using a park would be a bad idea because it would put children’s safety at risk.

Some questioned whether the proposal would actually help homeless residents, calling it a “Band-Aid” solution. A few said that was better than nothing and that the proposal never claimed to solve all homeless-related problems.

Sara Schumacher said negative stereotypes toward homeless people invoked by some opponents irritated her. She encouraged those in attendance to meet at 11:45 p.m. outside ECHO to count the homeless population; at least one person scribbled down the information.

Emotions have run high ever since the proposal picked up steam at the city level. Sue Lynch closed the public hearing saying that everyone was entitled to an opinion and that nobody should be put down for feeling a certain way.

As the conversation shifted to the city council, some members wondered whether they should pass a general ordinance change as proposed or add a specific location—and whether making such a change would fall under the council’s purview.

Tom Wolfe eventually motioned to include the Traxler location, saying it eliminated some unknown variables. Traxler Park arose as a possible alternate location during the July 9 parks and recreation committee meeting.

Rich Gruber wrestled with how the council should approach the issue but said it was in the interest of public safety. The final motion was a good compromise for everyone, he said.

“Tonight is an important step for the community as a whole,” he said. “What we as a community have stated is that the interest of every one of our citizens, whether they are downtrodden and in a crisis in their lives or are sitting comfortably at home with all those protections, we deserve to have public safety that’s afforded to every resident irrespective of their economic status.”

The council voted to add two new sites to the mix for a potential indoor sports complex.

One site is near Interstate 90/39, Milton Avenue and Kettering Street. The other is a downtown site bordered by Court, River, Franklin and Van Buren streets.

While both sites have pros and cons, the council thought there would be nothing wrong with studying each one.

A parking lot across the street from the Janesville Police Department will be the new lot designated for homeless overnight parking in Janesville.