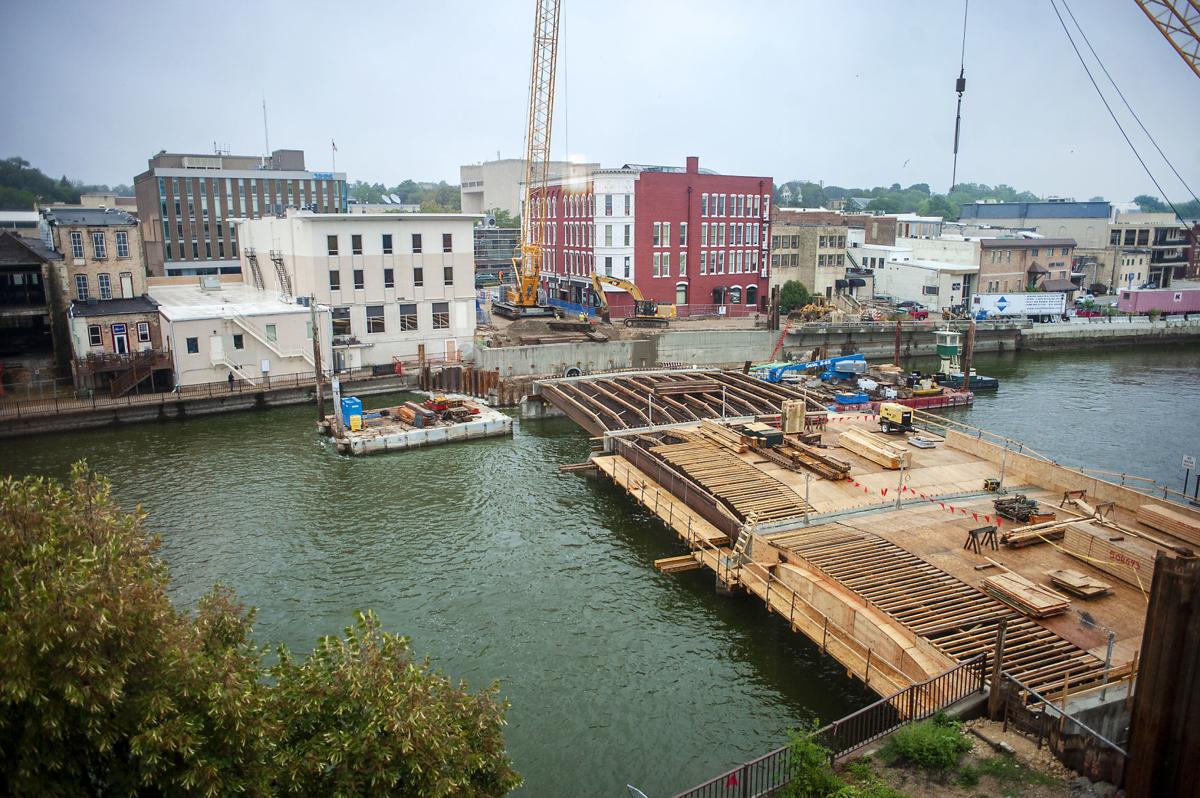 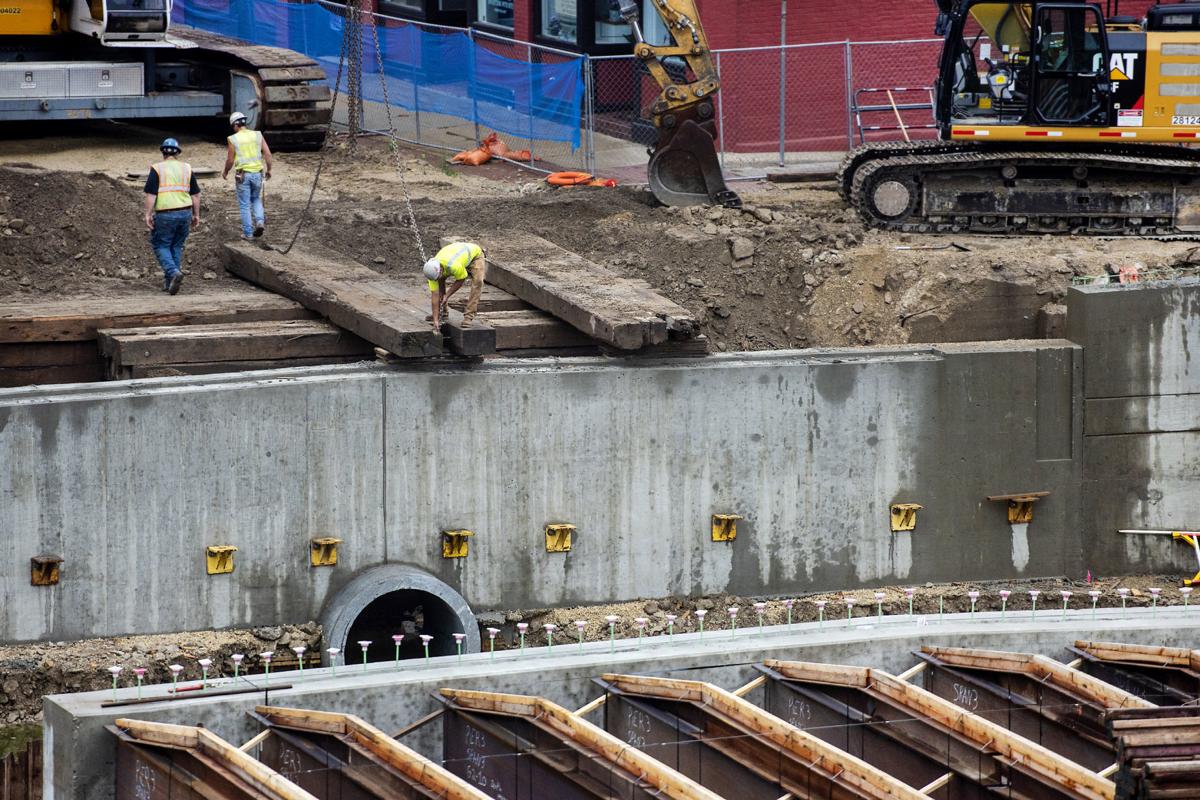 A worker connects a chain to a large beam while working on the Milwaukee Street bridge. The contractor, Zenith Tech, has said the bridge replacement likely will be finished by Oct. 24, months behind schedule. 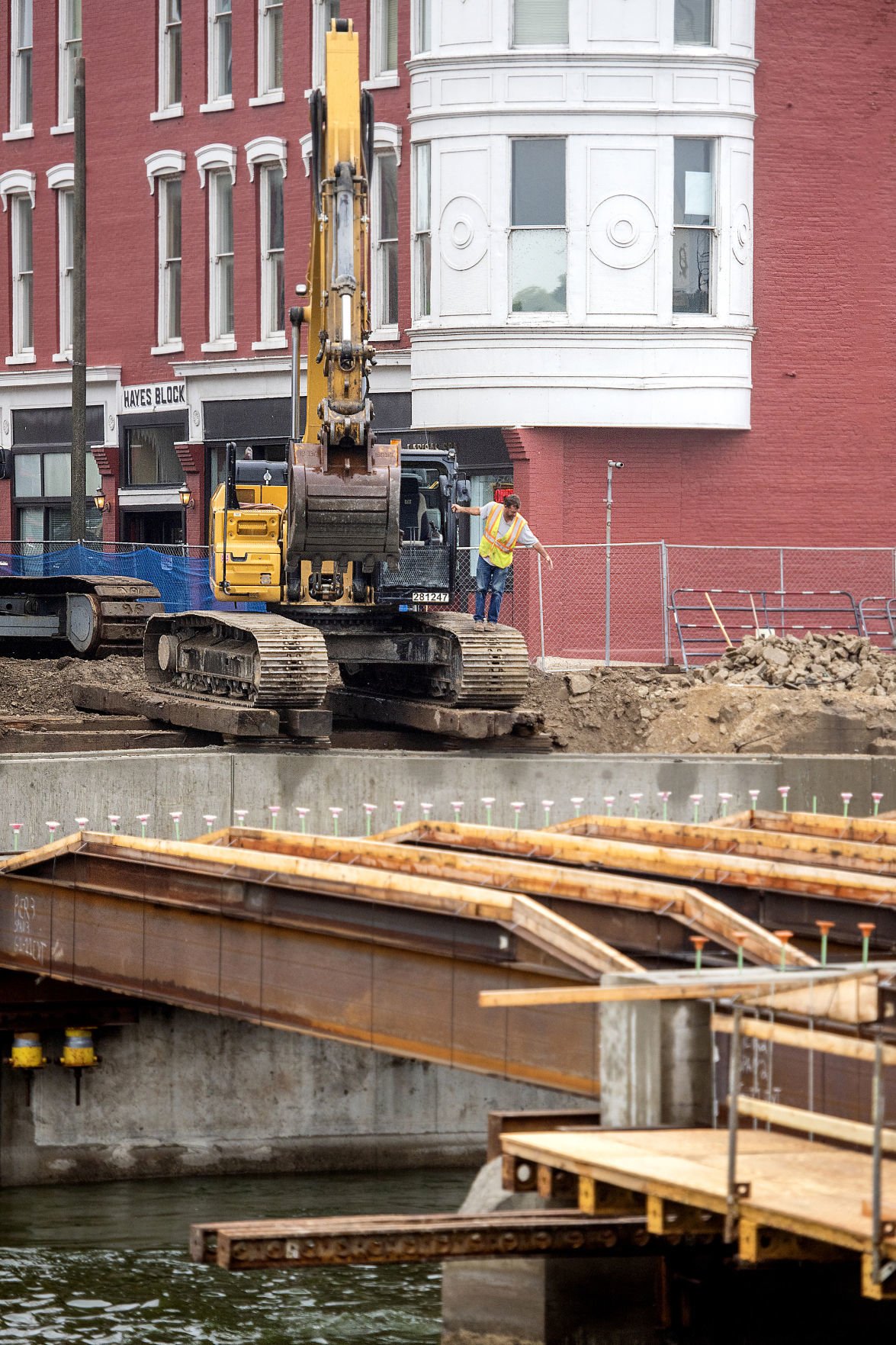 A worker holds on to an excavator while getting a look at the Milwaukee Street bridge construction in downtown Janesville on Monday.

Crews continue to work on the delayed replacement of the Milwaukee Street bridge, but the contractor apparently won’t wrap up the job until late October.

If weekend work is part of a catch-up strategy on a project hampered by high water and other complications, the work apparently won’t get done any faster than a timeline Zenith Tech gave the state and city in July.

The company has not provided a new completion date as requested by city and state officials, despite mounting fines from the state Department of Transportation for missing its extended deadline.

In an email to The Gazette, DOT spokesman Michael Bie indicated that Zenith Tech continues to project an Oct. 24 completion date, which is about four months later than the company first projected.

That’s despite the DOT asking the contractor in July and August to “compress” the project plans to get the work done sooner.

If the job takes until late October to finish, the bridge will have been closed to traffic for nearly 13 months.

Meanwhile, Zenith Tech continues to rack up penalty fees of $2,070 a day until the work is completed. Bie confirmed that under the current schedule, the project will run about two months and nine days past the Aug. 15 extended deadline the DOT had granted.

Officials have said Zenith Tech’s work was slowed by weeks of high, fast water on the Rock River last fall and earlier this year.

The company ran into other complications in April amid concerns that the work was causing structural disturbances to buildings along the East Milwaukee Street riverfront, according to DOT records. It’s not immediately clear what, if any, impact one building owner’s concerns had on the project.

After Zenith Tech said it wouldn’t meet May, June or July completion dates, the DOT gave the contractor until Aug. 15 to finish the work. The project remains in midstream, and Bie said Zenith Tech is now being charged “liquidated damages” every day it runs past Aug. 15.

Although the DOT has urged Zenith Tech to move faster, Bie wrote that the agency can’t force the contractor to work at a pace that gives parts of the concrete structure insufficient time to cure.

Weather and water levels appear to have been the main culprits behind delays in the bridge project. However, some business operators on West Milwaukee Street said they saw some days in July when river conditions might have been favorable, yet they said there were no crews at work.

Zenith Tech has several multimillion-dollar road and bridge projects underway in Wisconsin and Minnesota, including a $67 million project to replace a bridge over the Mississippi River at Red Wing, Minnesota.

It’s not clear if the Wisconsin DOT has granted Zenith Tech other extensions this year for any of its other projects.

On Janesville’s riverfront, the new Cobblestone Hotel opened Friday just west of the bridge on a section of West Milwaukee Street that has been blocked off as a staging area.

Although its parking lot is accessible, a construction fence continues to block a sidewalk that would allow walk-up access to the hotel’s restaurant and outdoor veranda. Crews had large concrete culverts and other material staged there Friday.

In an interview last week, Mary Beth Buonincontro, Cobblestone’s director of sales, referred to the West Milwaukee Street construction area as “the bridge construction side of the building.”

Buonincontro said Cobblestone was aware of the project, but she said she wasn’t aware that the work likely will finish several months beyond its original completion date.

Local people were popping into the new hotel last week, curious to see inside it, she said.

Some of those people had come downtown to see construction activity on the bridge. Buonincontro said it’s nice to have bystanders who are watching the project stop in the hotel, but the hotel is looking forward to an open bridge and unimpeded traffic.

“It is what it is. You’re going to have construction,” Buonincontro said. “We’re excited for when it’s all done and it’s going to be open.”