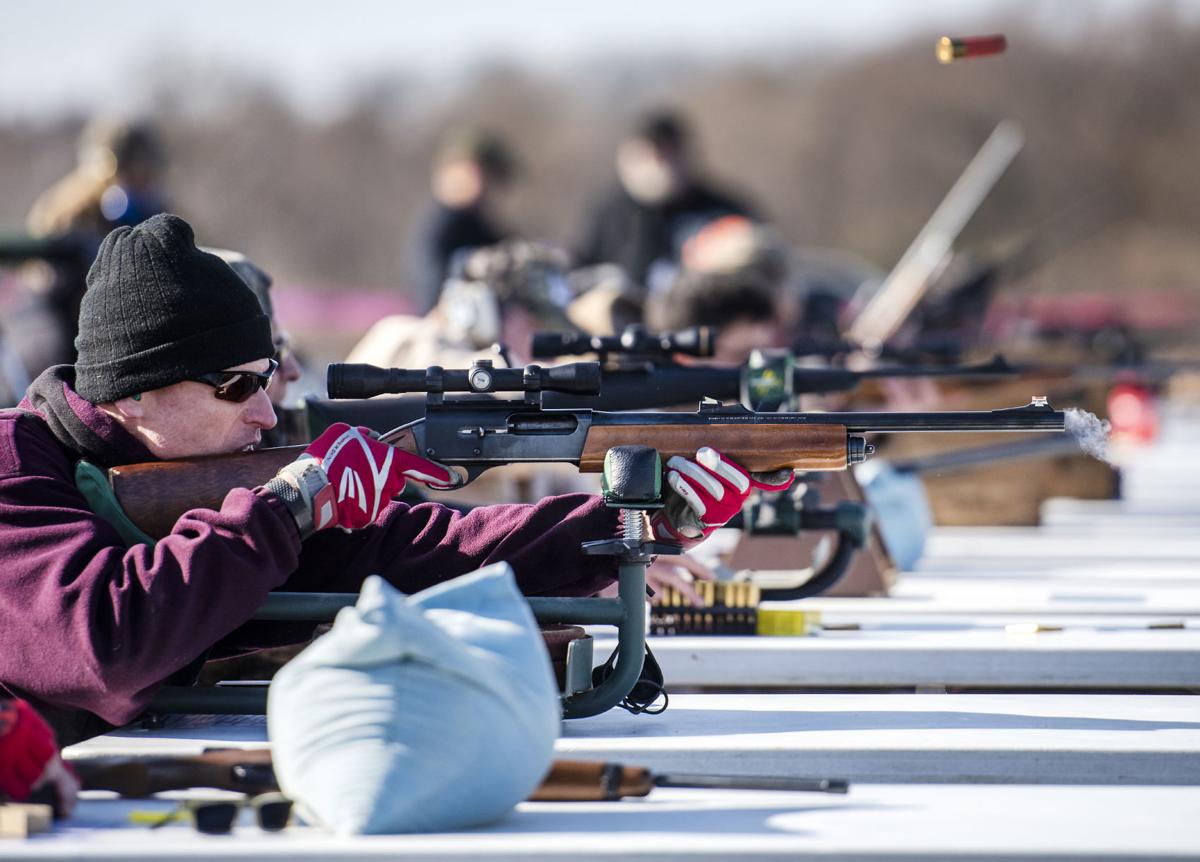 Todd Heritage of Elkhorn shoots at a target Saturday, Nov. 9, 2019, at Southern Lakes Evangelical Free Church in the town of Sugar Creek. 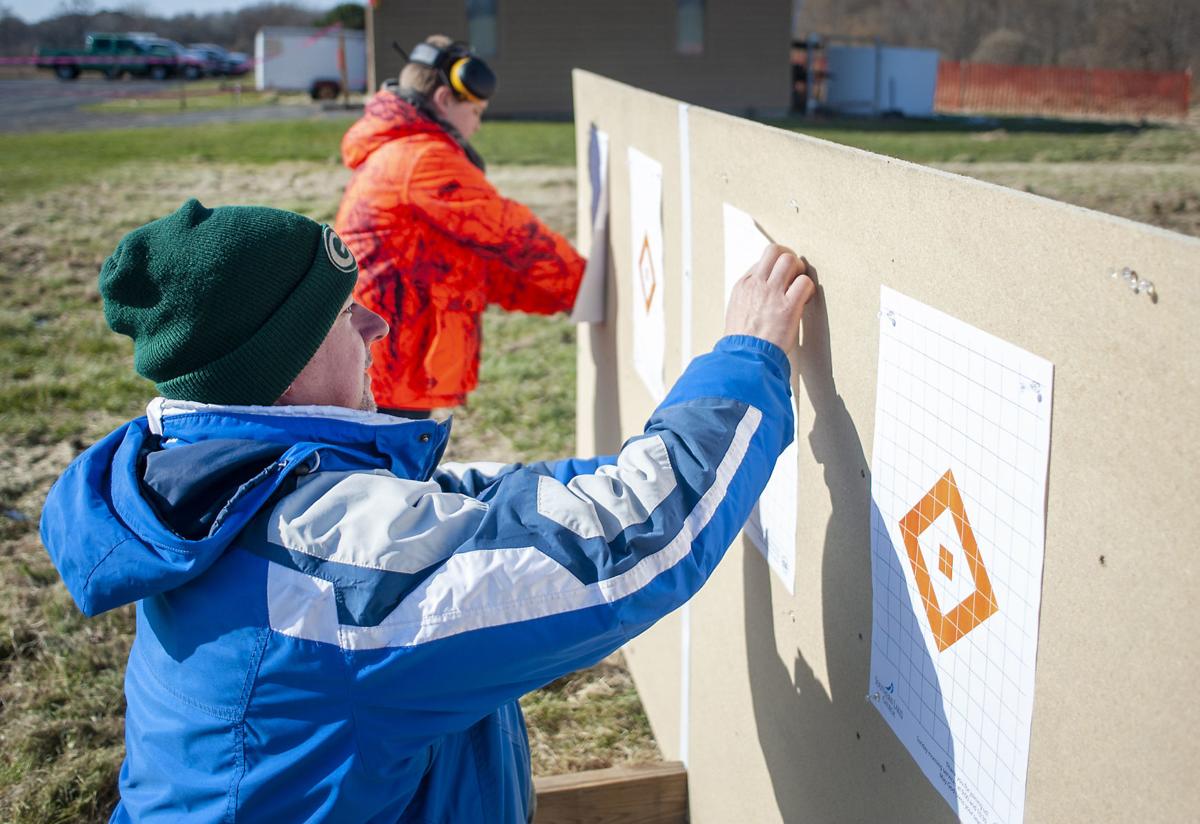 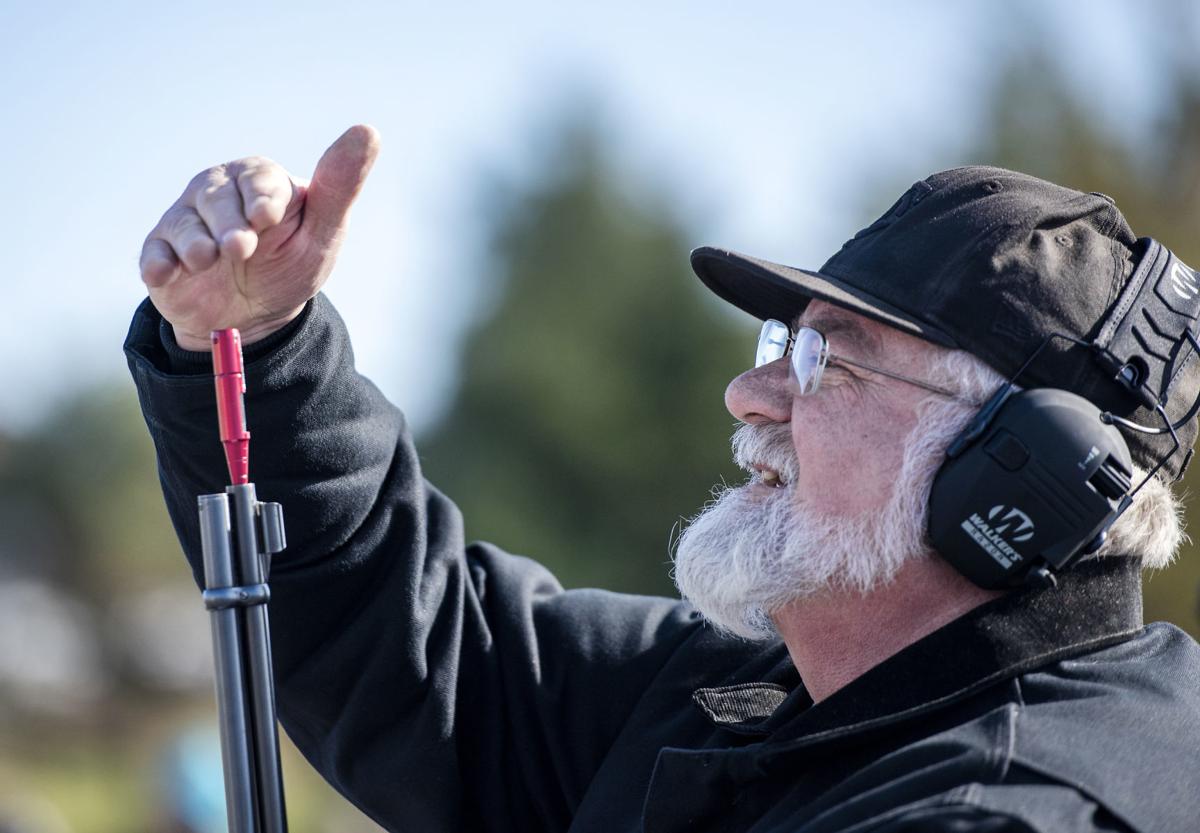 Milo Eldridge, a gunsmith and member of Southern Lakes Evangelical Free Church, started the annual gun-sighting event 13 years ago. He is shown here checking a laser pointer attached to a barrel as part of a bore-sighting procedure. 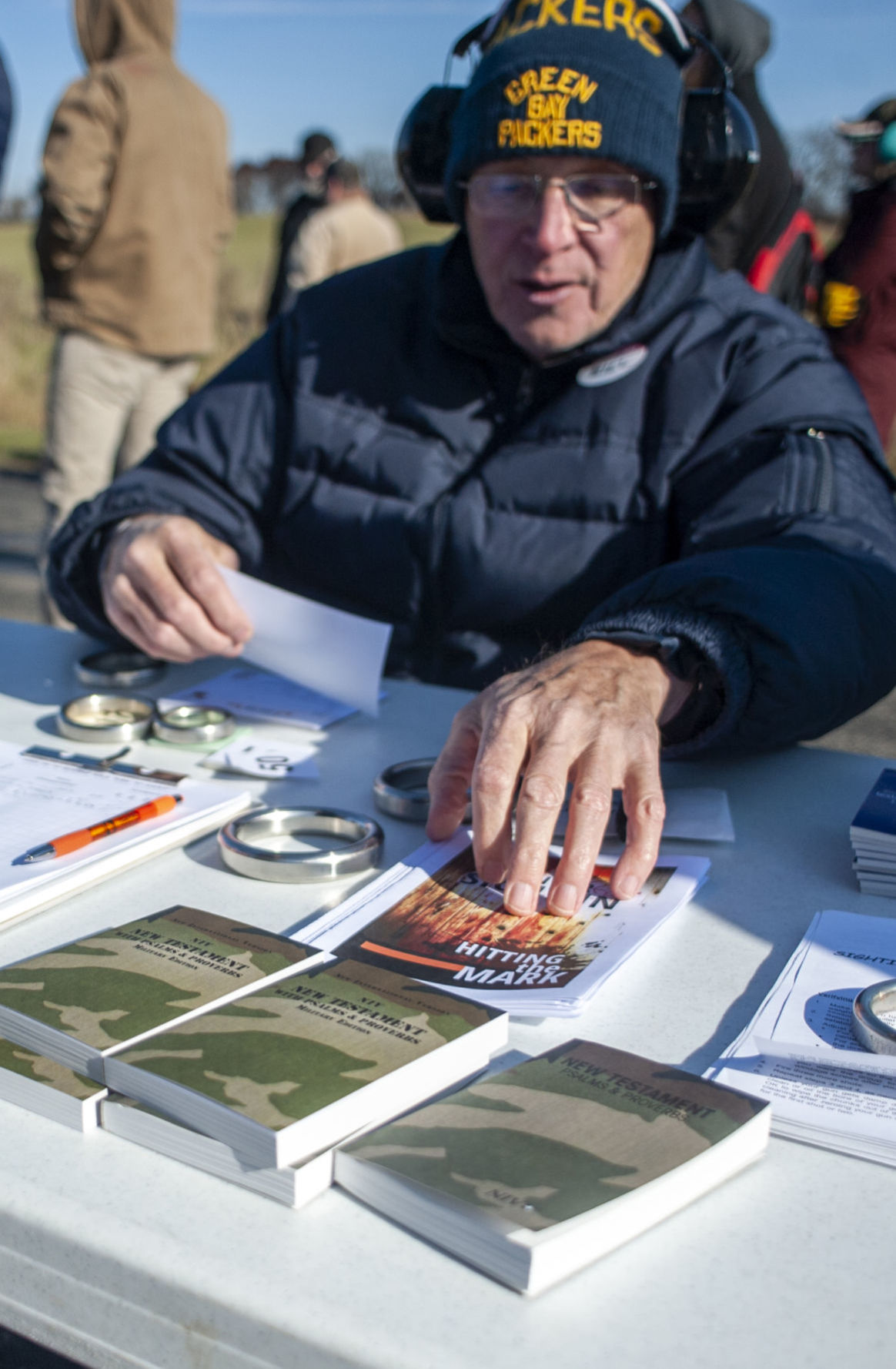 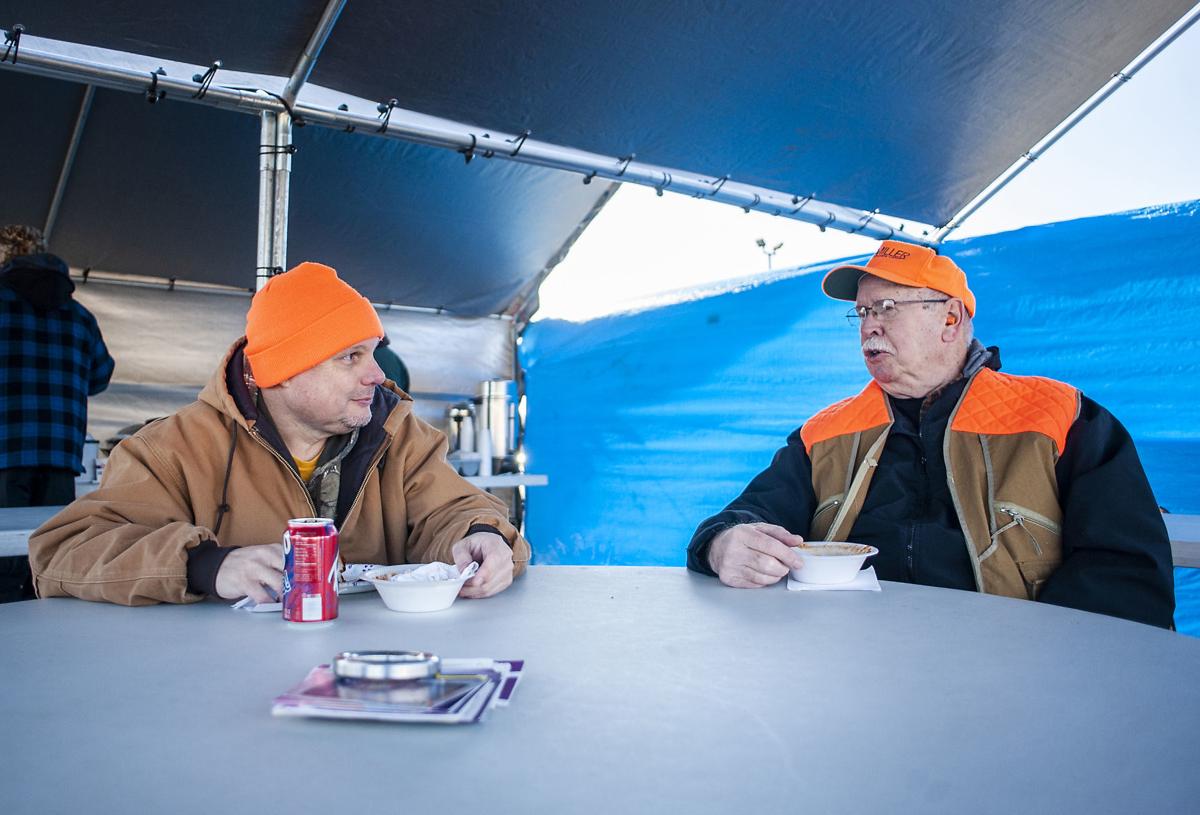 Scott Warner of Lake Geneva, left, and Bruce Russell of Elkhorn eat chili and chat during the sight-in Saturday, Nov. 9, 2019, at Southern Lakes Evangelical Free Church in the town of Sugar Creek. 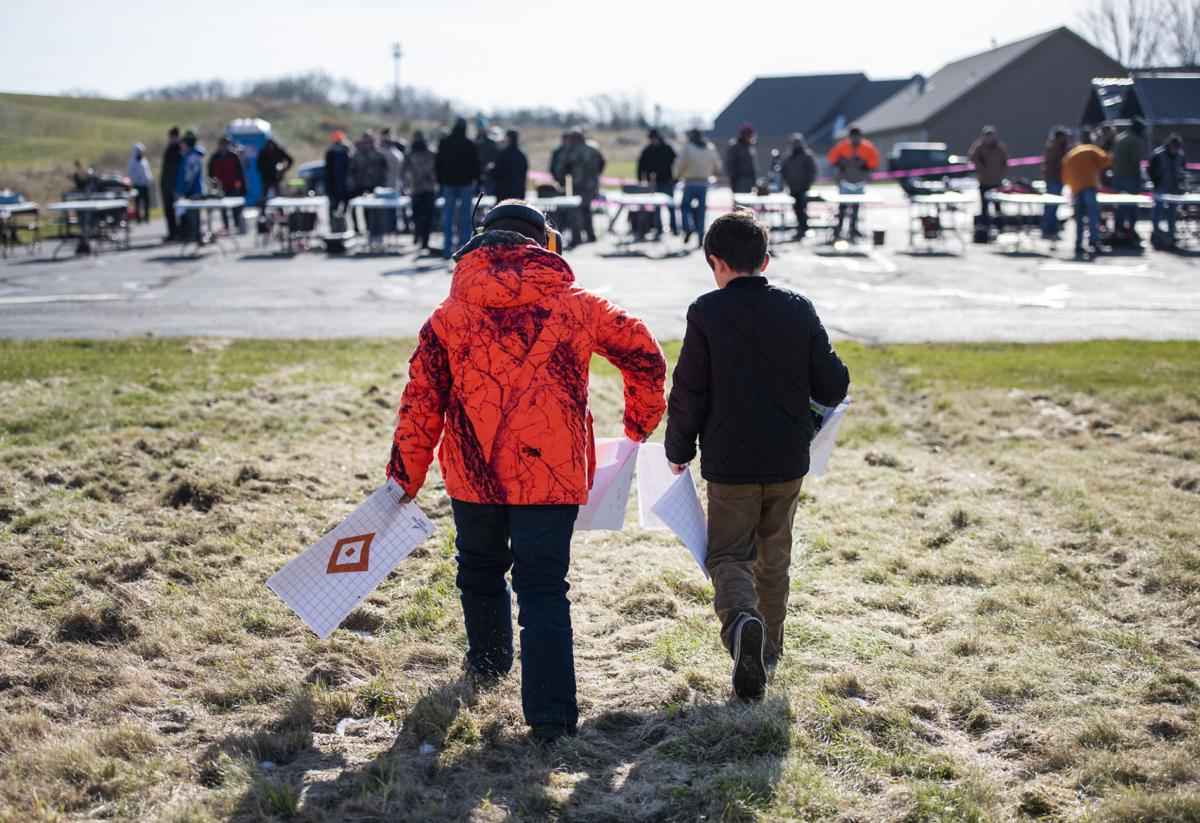 Two boys return from hanging up new targets for the sight-in Saturday, Nov. 9, 2019, at Southern Lakes Evangelical Free Church in the town of Sugar Creek.

Hunters got back in touch with their guns Saturday behind a rural Walworth County church.

For those who hunt only deer, those guns have waited nearly a year. Now it’s time to get ready again. The traditional nine-day gun-deer hunting season begins Nov. 23.

Getting ready means “sighting in” the rifle or shotgun, a process of shooting at targets and adjusting the sights until the bullet goes exactly where the hunter wants it.

The church is a pretty good place to sight in guns. It has a big, long backyard with a long pile of dirt at one end, the result of excavations as the church expanded years ago.

Eldridge and one of the pastors used to joke with each other, saying they have a pretty good place for a rifle range.

“After a few years, we looked at each other and said, ‘Why not?’” Eldridge said.

It has become a November tradition.

“It’s two weeks before deer hunting. Everybody just has to be sure (their firearms) are working right,” said Gary Smith of Wind Lake.

Hunters share advice, “and you get to talking to the other guys about how it went the year before,” Smith said.

The church offers the public service for free, but it also takes the opportunity to offer its religious services.

On the sign-in table, along with free earplugs, were pocket-sized New Testaments with camouflage covers.

“If a bullet doesn’t hit where you are aiming, you end up missing your target, or worse, unintentionally wounding game, resulting in needless suffering and waste,” the pamphlet states.

“When our lives don’t line up with what He (God) has told us,” it continues, “we miss the target, bringing on ourselves and those around us needless suffering and waste.”

No one was seen trying to make converts or preach to people, and participants seemed comfortable.

About 130 hunters attend each year, escaping public gun ranges where lines can be long, Eldridge said.

“We’re trying to make it more convenient and more of a relaxed atmosphere,” Eldridge said.

Each station had a spotter with a high-powered scope.

“You are an inch and a half right, 3 inches high,” one spotter called out.

Several volunteers were responsible for safety along the firing line, which consisted of 14 shooting stations.

Among the officials is a well-known face in Walworth County, Sheriff Kurt Picknell.

Hunters remarked on the weather, one jokingly blaming groundhogs’ mythical weather-predicting ability. Any groundhog that shows up at his tree stand is going to pay for it, he joked.

“It’s really something to be able to serve the people,” Rima said. “People really love it.”