Bob Kimball waters flowers near the Farm Progress billboard at the corner of Highway 14 and County MM in 2001, something he did all summer. Kimball gave countless gifts, great and small, to the community. He died Monday at 88. 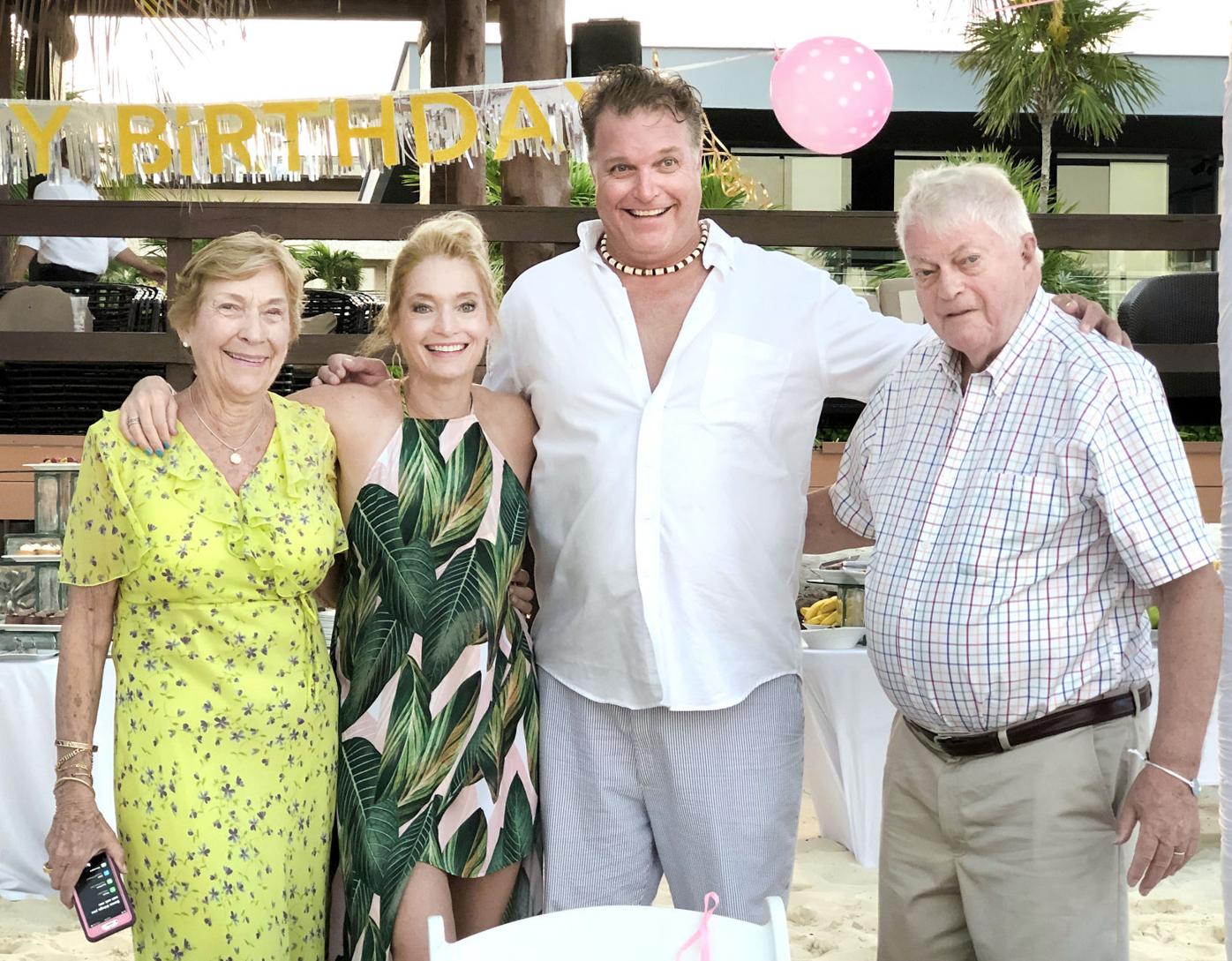 Bob Kimball, right, and Nancy Kimball, left, celebrate the birthday of their twins, Robin and Todd, center, in Riviera Maya, Mexico, last year. Bob died Monday after a long career as a builder and community advocate in Janesville. 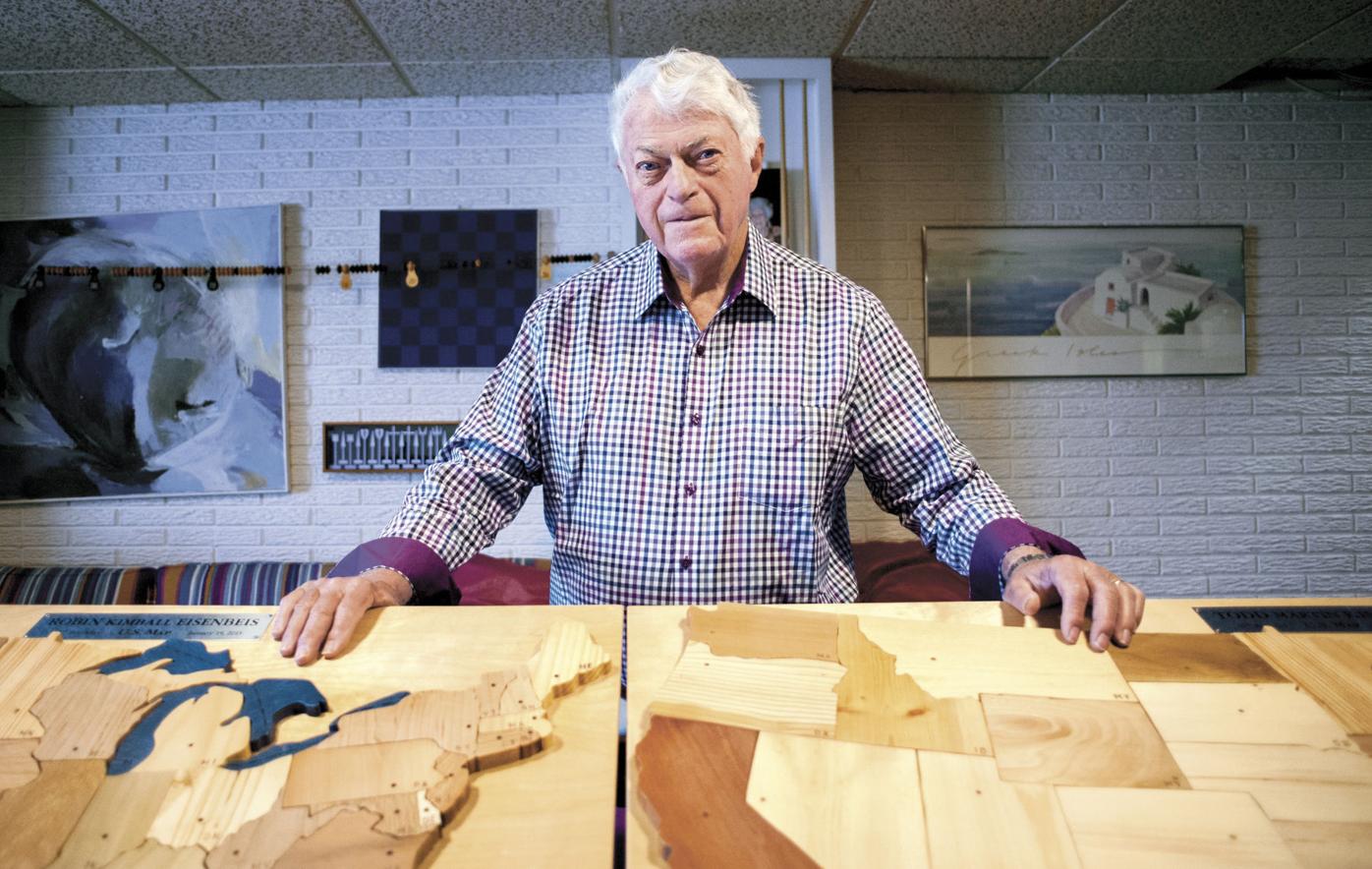 Bob Kimball poses with wooden maps of the United States that he built. Each state is made of wood found in that state. 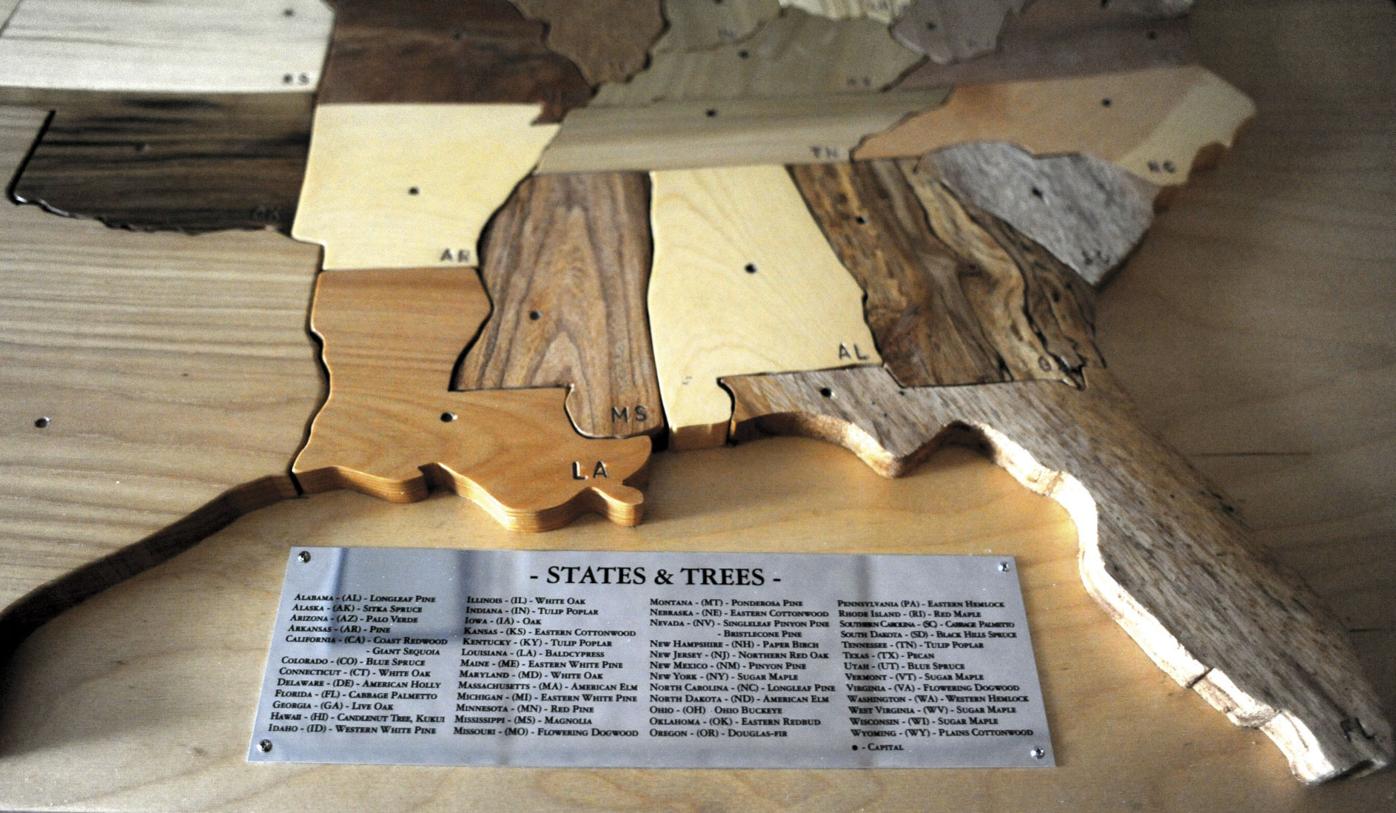 Bob Kimball loved to make things and give them as gifts, including several versions of this United States map, with each state made of wood found in that state. 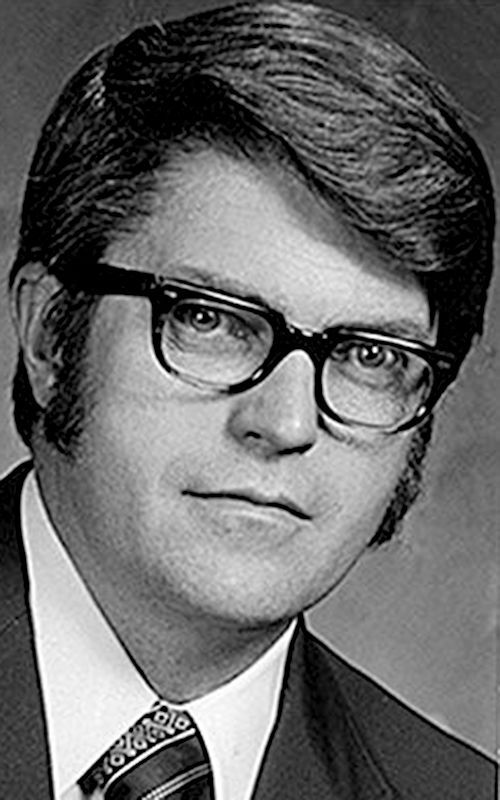 Bob Kimball waters flowers near the Farm Progress billboard at the corner of Highway 14 and County MM in 2001, something he did all summer. Kimball gave countless gifts, great and small, to the community. He died Monday at 88.

Bob Kimball, right, and Nancy Kimball, left, celebrate the birthday of their twins, Robin and Todd, center, in Riviera Maya, Mexico, last year. Bob died Monday after a long career as a builder and community advocate in Janesville.

Bob Kimball poses with wooden maps of the United States that he built. Each state is made of wood found in that state.

Bob Kimball loved to make things and give them as gifts, including several versions of this United States map, with each state made of wood found in that state.

Bob Kimball took life in his hands and squeezed all the juice out of it that he could.

Long known in Janesville as a builder, doer of good works and enthusiastic advocate for downtown Janesville, Kimball also found time to travel the world and show it to his children, make gifts with his hands, and go on adventures.

Kimball died Monday at age 88 at Hospice of Palm Beach County in Florida, near the home where he and his wife of 57 years spent parts of their winters.

Kimball was a farm boy from rural Janesville who graduated from UW-Madison, served in the Army and came home to start a construction business. He borrowed $850 from a professor in 1958 and soon was pouring concrete for sidewalks and house foundations.

He paid off the loan the next year. House building was booming in the 1960s, and one article in The Gazette said he poured basements for 175 houses in the first 10 months of 1963. He later was the first in town to build mini warehouses, family members said.

Kimball was a hard worker, but more remarkable was all the work he did for friends and for the community while running his business.

He was a longtime member of the Rock County Historical Society Board. He helped the Rotary Club build Rotary Botnaical Gardens and also took three Rotary trips to Haiti, where he helped construct wells for rural residents who had to walk miles to fetch water.

He took pride in selling the most tickets to the annual Rotary Corn Roast for many years.

Twice he orchestrated the moving of the historic Frances Willard schoolhouse, now on the grounds of the Lincoln-Tallman Restorations.

Kimball’s construction business birthed a property management business as he bought downtown buildings that stood empty as the Janesville Mall drained away the retail trade in the 1970s.

His renovations included the Peters Building apartments at 117 E. Milwaukee St., the former Kresge’s store at 101 W. Milwaukee St. and the historic Fredendahl building in the first block of South Main Street.

Todd, Kimball’s son and longtime employee and partner, is sure Kimball saved some of those buildings from being torn down.

“I hate to see these neat buildings become parking lots,” Kimball told The Gazette in 1988. “This is a part of Janesville. There’s a lot of value in these old buildings.”

Residents who have a brick pattern in their concrete basement walls likely have a Kimball foundation, said Norm Paulson, who worked for Kimball and eventually became his partner.

Paulson kept the Kimball name as a tribute.

“I’m forever grateful to the man for the opportunity he gave me in business and the things he taught and shared,” Paulson said. “He was like that with both of my sons (whom Kimball also employed). He was a tremendous guy.”

Kimball was full of sayings, such as “Measure twice, cut once.” His favorite was, “You only know if you under-build it.”

That meant if you build it too well, you’ll never know, but if you skimp, the low quality will make itself known. The family plans to have the saying attached to an ornamental steel tree downtown.

“He was always adamant about doing things the right way,” Paulson said.

Kimball leased another of his downtown buildings to the Janesville School District for its Rock River Charter School and eventually donated the building to the school district. He took an interest in the school’s work, which was to help students who struggled in traditional high schools, and he wrote congratulatory cards to the graduates.

“He was so proud of that because he thought it was so important for those kids to have a good education,” Todd said.

Jeni Lindstrom, Todd’s significant other, remembers having dinner with the Kimballs and saying how she was enjoying the hummingbirds. The next morning, she found a hummingbird feeder in her yard.

“He was very thoughtful,” especially for a man in the construction business, Lindstrom said.

Kimball bought Nancy roses for their anniversary, one rose for each year of marriage. He always used the same card, adding a line each year, talking about what they had done on their previous anniversary.

Kimball and close friend Bob Ozburn took a trip down the Mississippi River in a homemade raft in 1980, taking their teenage sons along. They floated down sections of the river over the ensuing seven or so years, eventually arriving in New Orleans, where the mayor gave them the key to the city.

The journey almost ended before it started as they approached their first lock and dam. The tiny outboard motor conked out, and Kimball had the engine in pieces as they drifted toward the dam. He got it going just in time to crash into a concrete abutment and steer into the safety of the lock.

Kimball could fix just about anything, several friends said.

They would end each segment at a tavern, where they would find someone willing to drive Kimball’s El Camino to their next stopping point, Todd Kimball recalled.

Kimball was not the big, blustery personality one might expect from a man of his accomplishments and smarts. Friends said he was quiet with a natural charisma and a love of people. He was always making friends.

“He had gentle strength—a real solid guy. He didn’t need to be loud to make his point,” said Chris Ozburn, the other teen on the raft trip.

Kimball loved practical jokes. Gary Meinert, who used to eat lunch with Kimball and a couple of other downtown businessmen, recalled a conversation in which one of them made a joke about crack cocaine, saying he had a lot of “crack” in his driveway he wanted to get rid of.

Kimball had one of the men invite the man and his wife to his cabin for the weekend. While they were gone, Kimball and some others removed the man’s driveway.

Kimball was a collector. He loved John Deere “H” series tractors, a reminder of his youth on the farm.

He collected Jim Beam bottles and corkscrews. He became a member of a prestigious corkscrew collectors club whose members hosted gatherings at their homes around the world. Bob would attend with Nancy and their twins, Todd and Robin, born in 1965.

He was intense about his collecting. He collected Ross pig corkscrews, which come in various colors, but the blue pig is the rarest and one he never found, Robin said.

“He was very giving, and everybody knows that, and he gave and worked at giving so much, whether it was his philanthropy or something he made for his kids,” said Catherine Ozburn Barton, Chris’ sister.

“He was rightly but quietly proud of his life and who he was and what he accomplished. He was proud of his family,” Ozburn Barton said.

Kimball was known affectionately as “BK” to nearly everyone, even his grandchildren, Todd Kimball said.

Todd worked for his father starting at age 5, when he would collect refuse at construction sites. That partnership continues today, as Todd runs the property management business.

While Bob was running his business, Nancy became one of the top Realtors in the state for a number of years.

The couple would refer their clients to each other as their needs dictated. Nancy later got involved in the finance end of her husband’s property business.

“They were a really good team,” their daughter, Robin, said.

Until last year, Kimball went to the office every day. One of his last projects was building another warehouse to store RVs, which, like so many of his ventures, proved popular.

Kimball was always there to help a friend in need, whether it be spray painting a house or moving a shed, even in the early days when he didn’t have a lot of money, longtime friend Gary Meinert said.

“He did that for everybody. He just did it all the time,” Meinert recalled. “And he worked hard, oh my goodness.”

“He’s the most generous man in the world,” Warren said, adding that Kimball got him interested in philanthropy.

“Becoming a friend of his made me a better man,” Warren said.