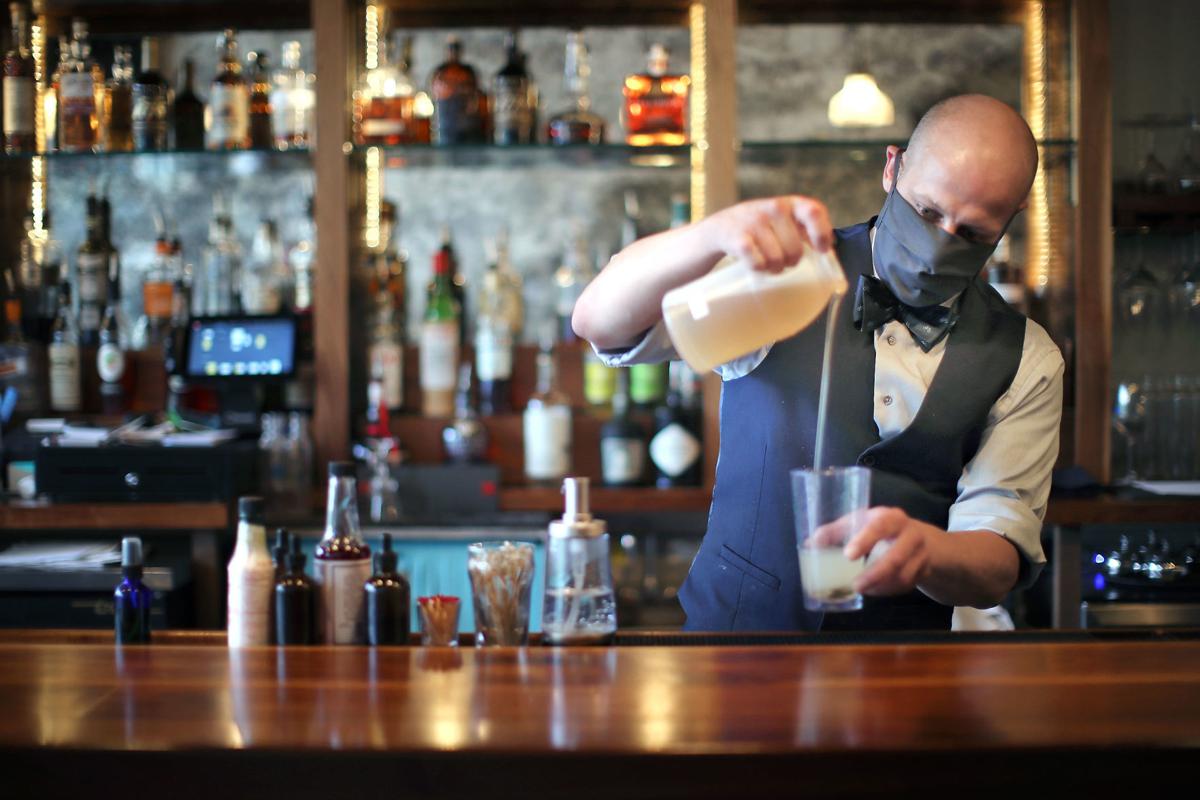 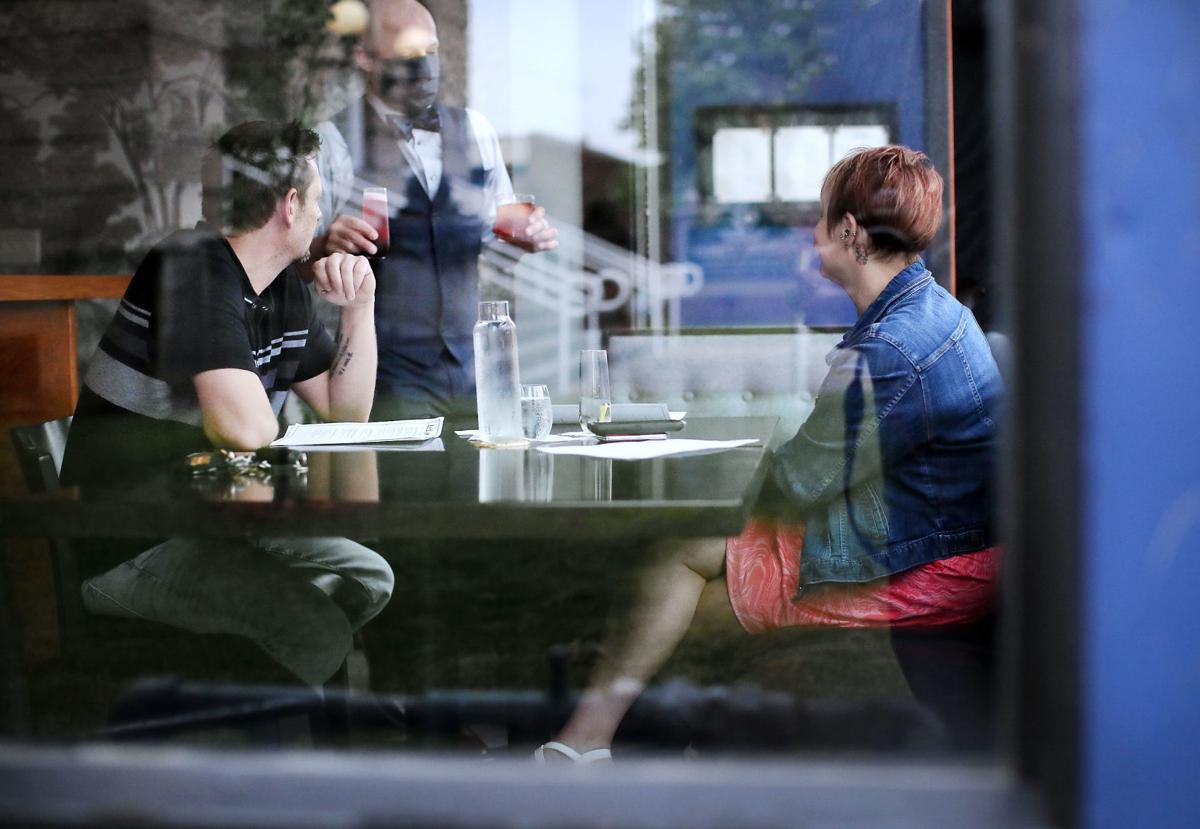 Bartender Billy Burg serves Gina Roberts and Brent Vogel during their visit to Lark on a recent evening. Lark opened its dining area only for cocktails and has started to meter the crowds to 20 at a time with a two-hour limit. 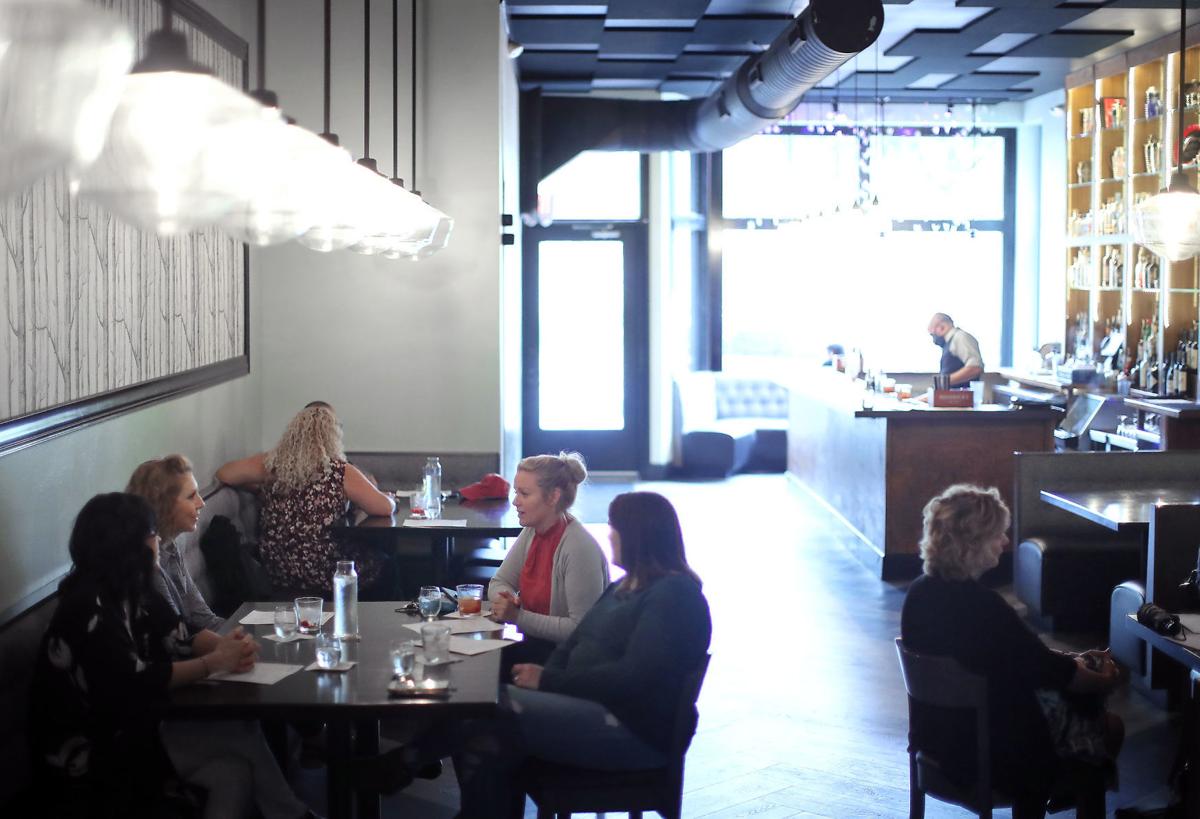 Lark opened its dining area for cocktails Thursday and has started to meter the crowds to 20 at a time with a two-hour limit. 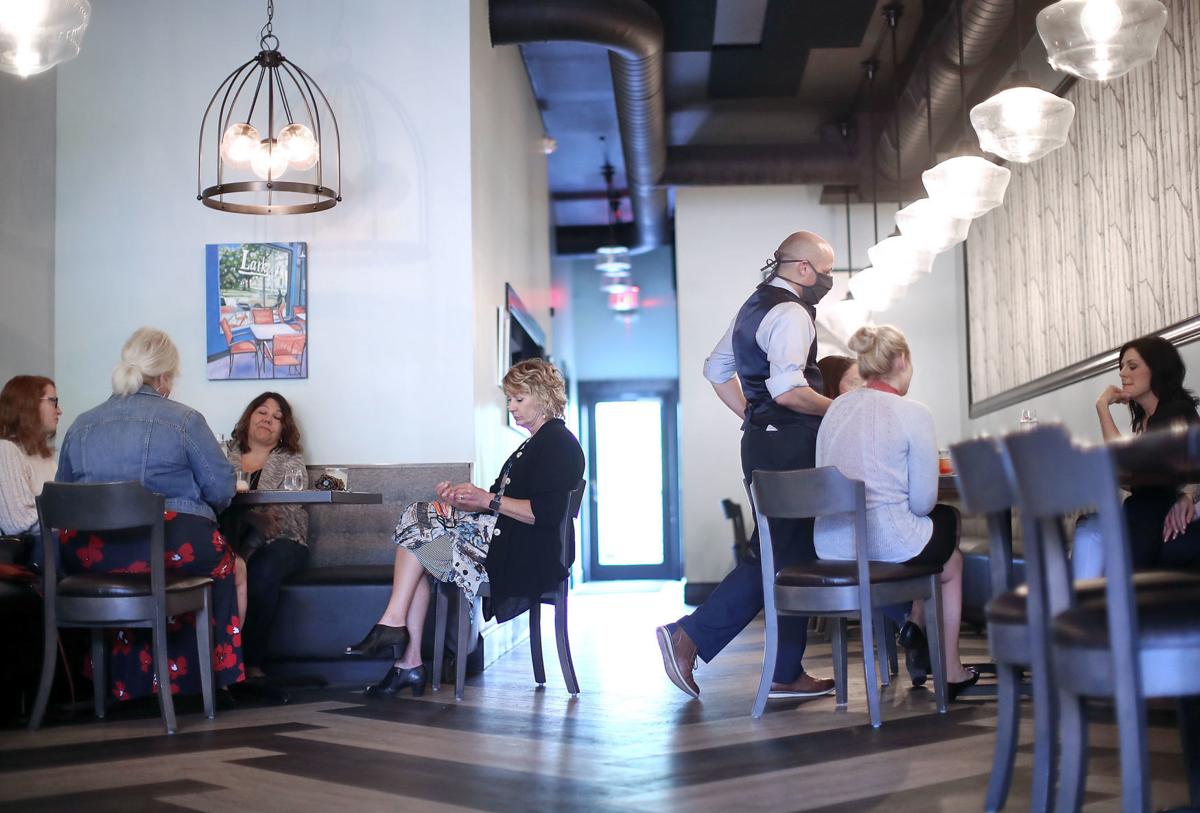 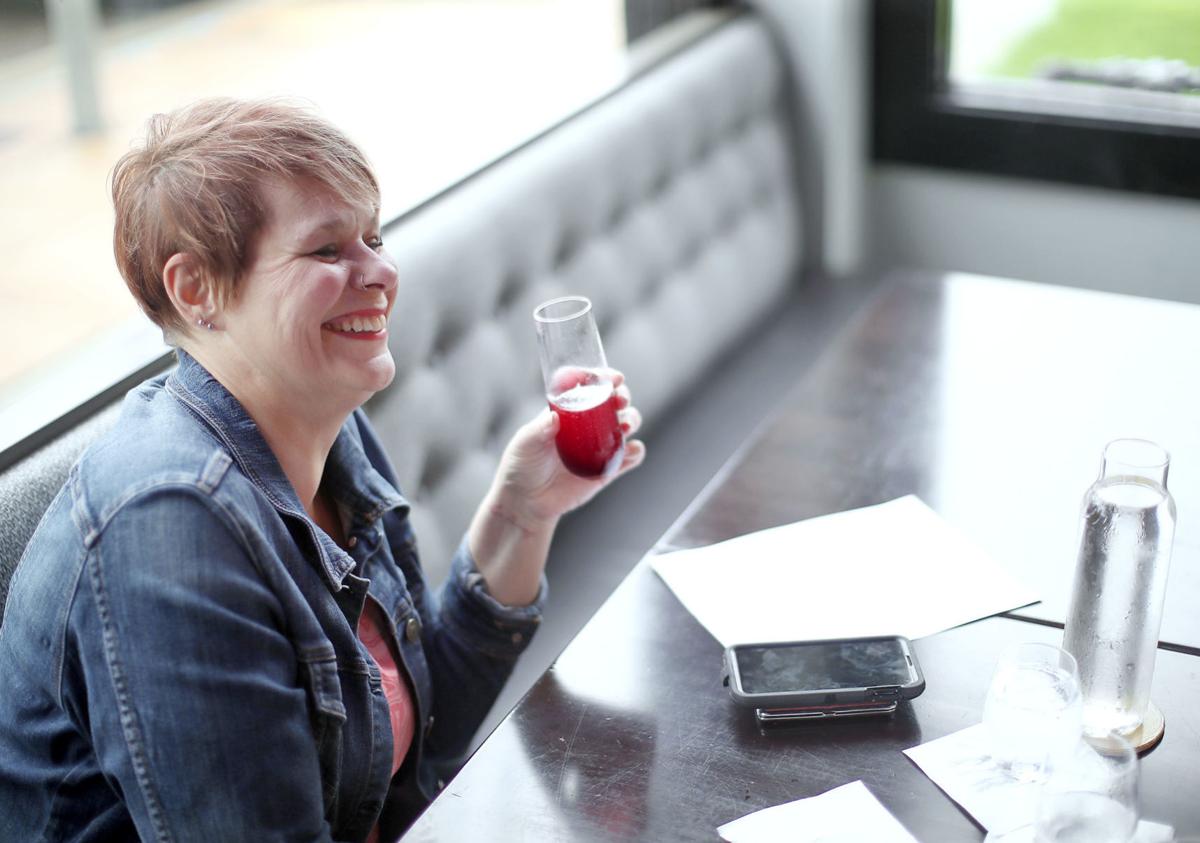 Gina Roberts smiles with a cocktail in her hand during a during visit to Lark on Thursday evening. 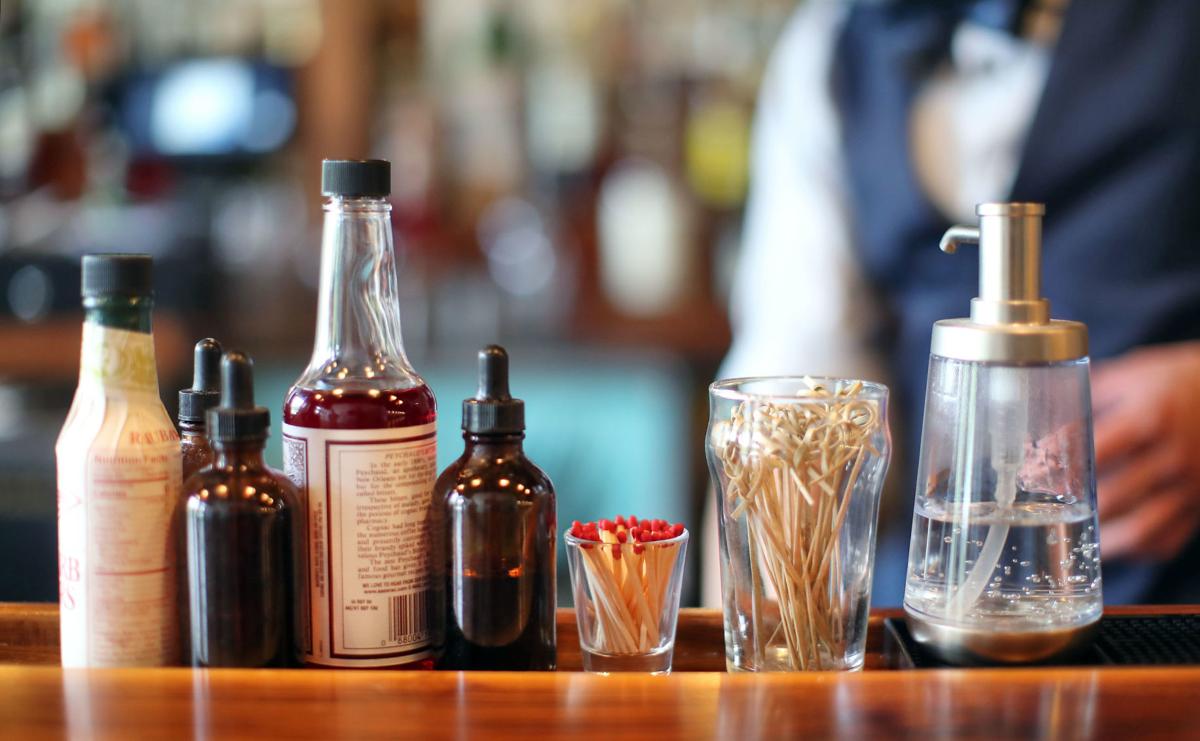 When head bartender Billy Burg showed up to Lark for his first work shift in weeks, he was dressed as usual: a white shirt, a black vest and slacks, a black bow tie, and spit-shined leather Oxford shoes.

Burg doesn’t know how to tap dance, but he pirouetted behind the bar nonetheless, rattling cocktail shakers like maracas, his arms swooping in arcs as he splashed whiskey, grenadine and bitters into glasses.

It was a cocktail-maker’s mambo for no audience. The bar Burg stands behind remains closed to customers, cleared of chairs.

That’s part of a reopening plan by Lark’s management aimed at keeping patrons and staff at the downtown Janesville cocktail and small-plate restaurant safely separated during the ongoing COVID-19 pandemic.

Like many in the local restaurant industry, Burg is navigating dramatic changes in how customers and bar and restaurant workers can interact.

Burg has been back bustling at his job since late last week, but he was the lone employee at work at Lark on a recent day. The restaurant’s kitchen likely won’t re-open until sometime in June as the restaurant overhauls how it will serves customers during the pandemic.

For now, Burg is maestro and server of fashionable drinks and, at times, enforcer of new, COVID-era rules Lark has put into place to try to keep its staff and patrons safe.

As Burg mixed a bourbon whiskey Vieux Carré for a woman in a floral sundress seated with two friends at a table halfway across Lark’s dining room, another woman walked in, moved to the bar and casually put an elbow down to beckon Burg for a cocktail order.

The woman didn’t know the bar still is technically closed to the public. Burg had to tell her to find a seat in the dining area.

Above his cloth mask, Burg’s eyes and creased forehead told the tale. He was reluctant. He instantly regretted having to shoo a patron from the bar where they would normally just sit down and order a drink.

“This is a lot to get used to, a lot for me and everybody. But you’ve just got to get used to it for a while. The bar feels like a work station for me right now. No one can sit here, they’re all throughout the room,” Burg said. “I’ve got to find other ways to do more to connect with people now. It’s just a new part of this job.”

The longtime restaurant announced its full reopening last week with a hand-painted, red and white lettering on the windows that read: “OPEN, Dine in, Delivery, Curbside, Carryout.”

Mac’s, like many local pizza restaurants, has remained open for delivery and carryout throughout the pandemic, but like other eateries, the longtime restaurant had to shutter its dining room for weeks under the pandemic.

The restaurant has done brisk business with carryout and delivery of pizzas. And at times, it has strained a kitchen that has worked under temporary state restrictions and public health recommendations that have limited the number of kitchen staff who can work at once.

Owner Ericka Bickle said she can remember days in March and April, during the state’s COVID-19 lockdown, where she felt glued in place at a kitchen work station, cutting cooked pizza after cooked pizza for hours.

“You’d work for hours in one spot just to keep up,” she said.

Under reopening plans, Mac’s management has decided at least initially to curb its pizza, broasted chicken and salad buffet—one of the restaurant’s main calling cards. That’s an adjustment many Mac’s regulars will have to get used to as the restaurant monitors the pandemic and its own ability to serve its patrons safely, Mac’s manager Eric Carlson said.

Carlson said Mac’s has used its Facebook page to poll its customers on how they would like the restaurant’s dining room to operate during the pandemic. He said customers have tossed out dozens of ideas, some of which the restaurant might run with.

“We’ve gotten suggestions of a lot of different ways that we can do a buffet that’s more cafeteria style, or a sit-down with a ticket system, maybe give people a small buffet menu they can choose from. Give them a checklist of the things they’d like a server to bring to their table,” Carlson said. “We got all these suggestions. That’s what is good about opening up to feedback from the thousands of people who know we’re a small business just trying to figure out how to do this.”

Another sit-down restaurant, the Prime Quarter Steakhouse on Highway 14, for years has operated under a unique business model. It sells customers the option to select and cook their own steaks over the flame of on an in-house grill.

Dalton Kroeze, manager of the Prime Quarter, said even as other restaurants are beginning to reopen for dining in, his steakhouse’s owners are holding off on reopening the restaurant until September or October.

And when Prime Quarter does reopen, it’s likely, Kroeze said, it would no longer operate as a “grill-your-own” restaurant.

“The way we think it’s going to go is it probably won’t be cook-your-own anymore. And we probably won’t even have the meat case for people to grab their own steaks. We’re gearing it to have a chef behind a separate glass enclosure who’d do the cooking. That’s just ... we’re coming up with different plans on how to make it safer for everybody for sure.”

Kroeze said he can’t know how customers would take a dramatic change to Prime Quarter’s signature dining experience, but he said that after a hard look at logistics, it became clear the restaurant couldn’t operate a 12-foot grill for customers to use and keep people spaced apart enough to adhere to public health recommendations on social distancing.

He said amid that change, the restaurant will be dealing with spiraling costs for cuts of meat driven by nationwide bottlenecks in the meat supply.

At Lark, owner Joan Neeno said the restaurant for now is allowing in only 20 people at a time. And patrons must sign onto a reservation list that would give them a two-hour slot to have cocktails. Customers would cycle in and out on a timetable.

That’s to limit occupancy at a time when public health officials recommend dining rooms and bars maintain about 25% full occupancy.

“It’s a model that you already see at some places in Chicago that have limited seating. It’s not all that unusual, except for Janesville it is, and it’s being driven by something entirely unique. It’s the pandemic,” Neeno said.

For now, the restaurant will run only as a cocktail bar, but bigger changes are in store, Neeno said.

Neeno had been readying a storefront next door to Lark, originally as an offshoot pizza and pasta restaurant. Neeno pivoted on those plans when the curtain of COVID-19 dropped in March.

In coming weeks, Neeno said, the space next door will open as a fresh market selling some ingredients fresh made in Lark’s kitchen along with other specialty items such as artisan breads. The market should open sometime in mid-June, Neeno said, and when it does, Lark’s kitchen will reopen for a “phased-in approach.”

That would allow the kitchen to fuel both the new market and the restaurant crowd.

Neeno said most local restaurant operators she’s spoken with say they’ve seen only 25% to 30% of capacity in their dining rooms as they reopen.

Neeno believes having a market tied to Lark could give the restaurant an extra conduit to customers who might continue to be leery of dining out amid the pandemic.

“The reality is 40% or even 50% occupancy isn’t enough to pay the bills and keep people employed. We’re hoping the market can bridge that gap moving forward,” Neeno said.

“People are going to be hesitant to dine in for a while, and we understand that. We want to make it easier for them to take some signature food home. We know the new reality. We’re trying to be smart in how we address that.”