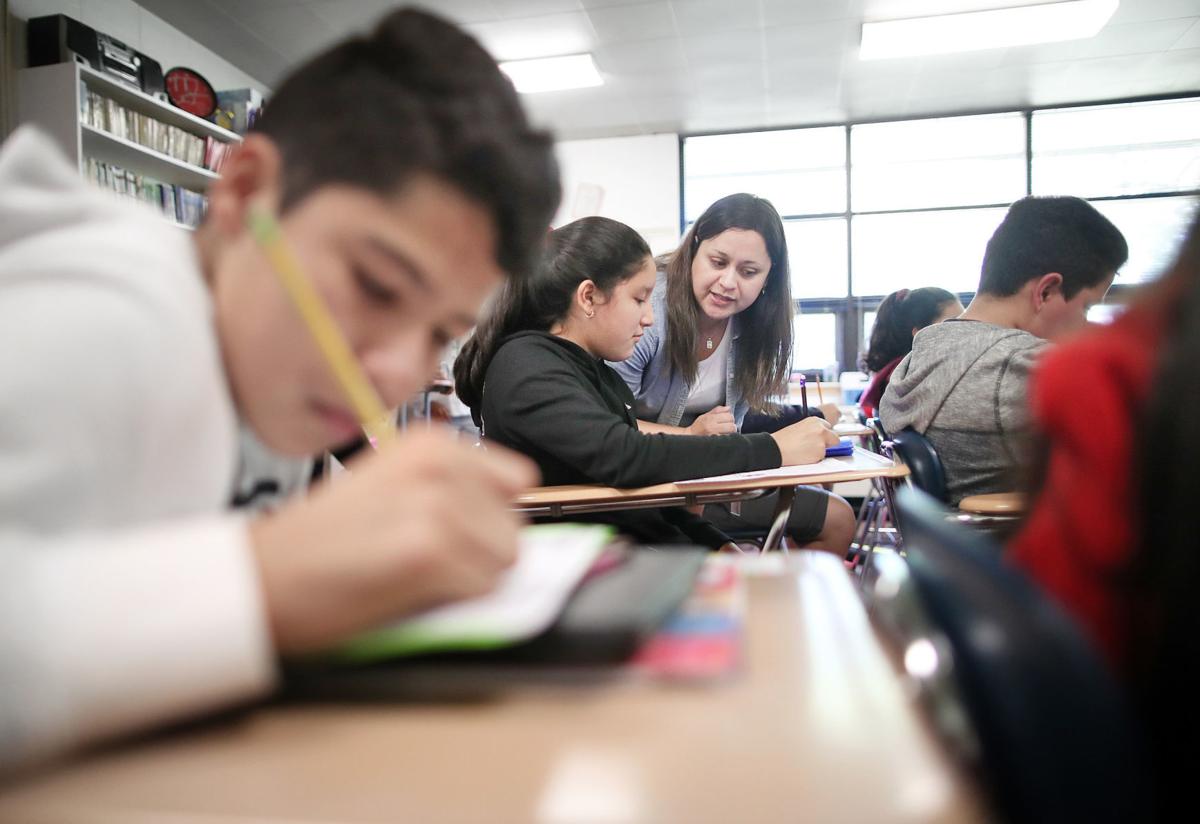 Whitewater Middle School teacher Rosalinda Martinez helps a student during reading class. She said being a teacher is rewarding but at times overwhelming. 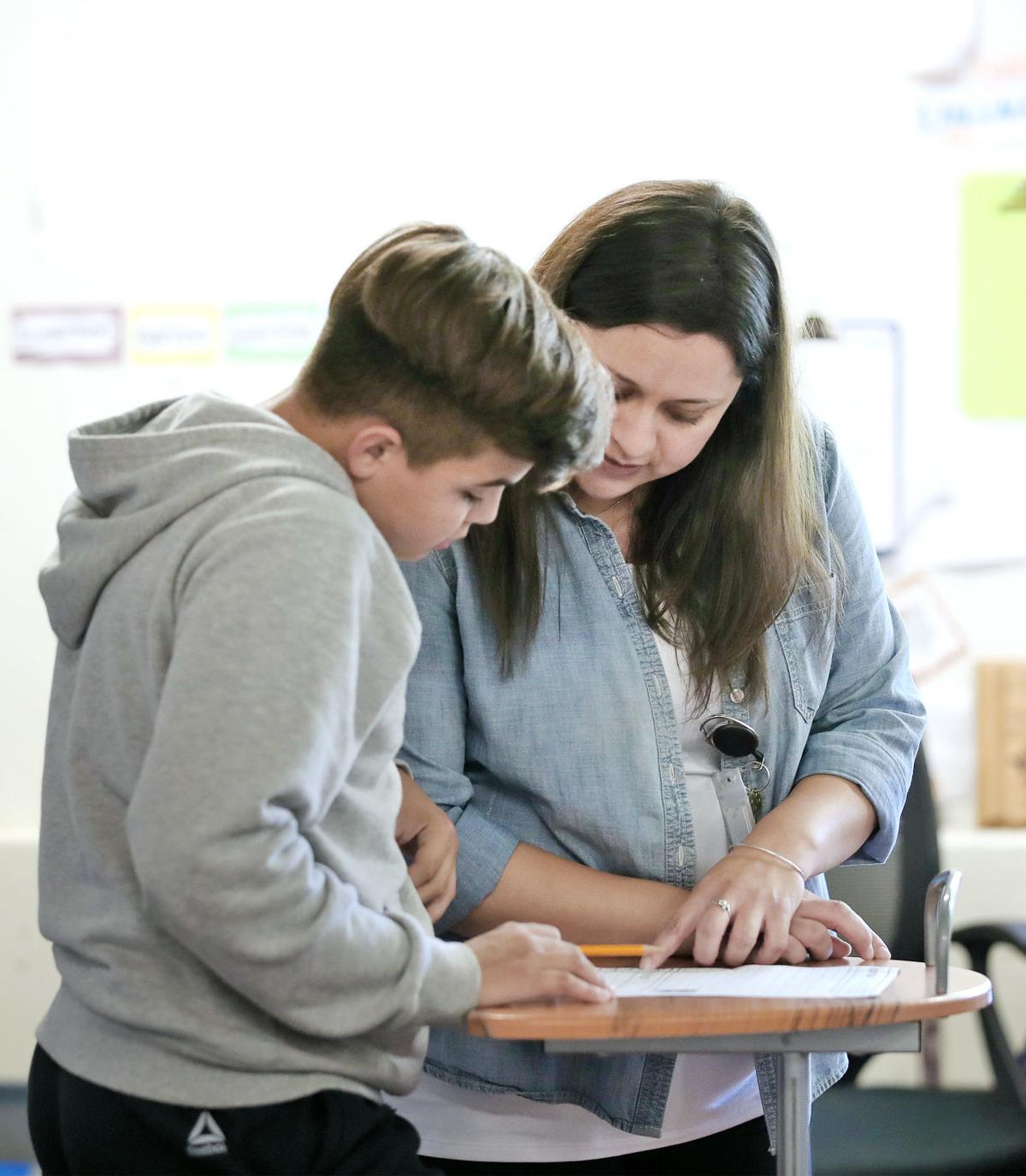 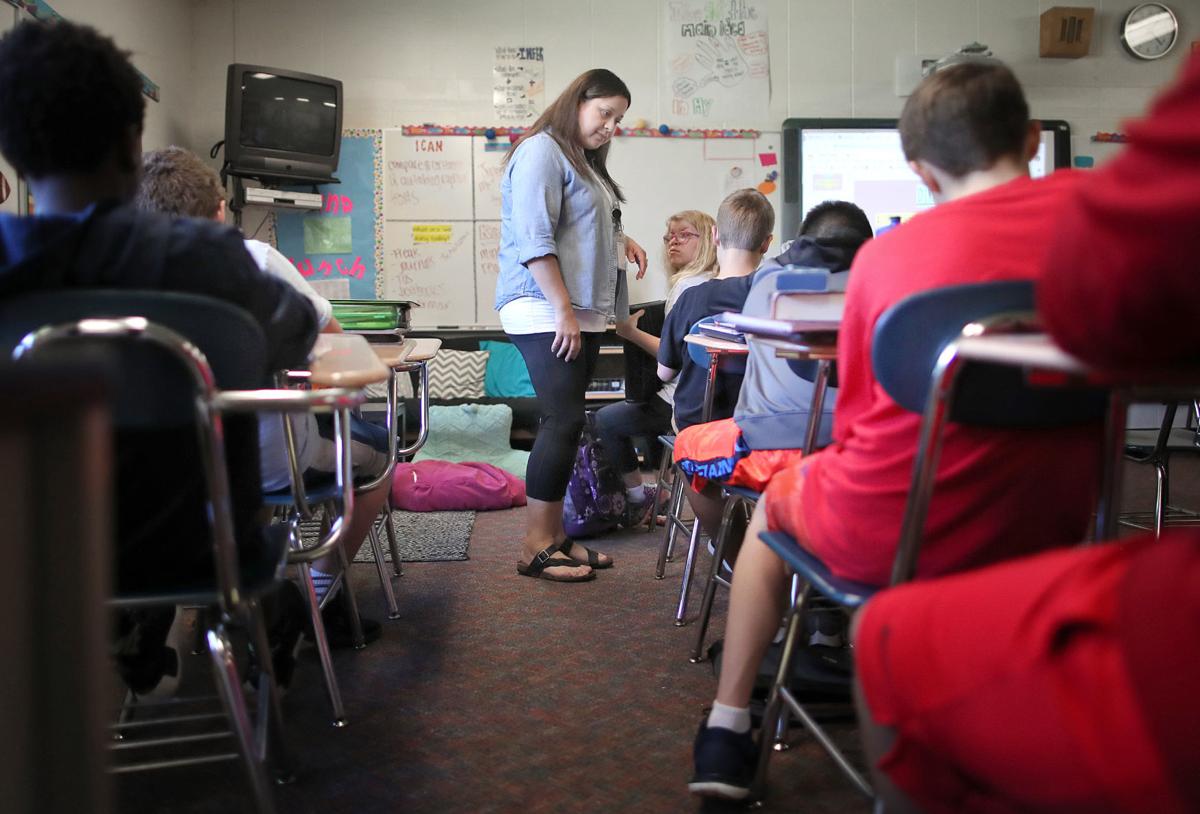 Whitewater Middle School teacher Rosalinda Martinez walks between rows of desks as she offers help during reading class Sept. 16. She said she finds herself having to fill out more reports of child abuse than she used to. 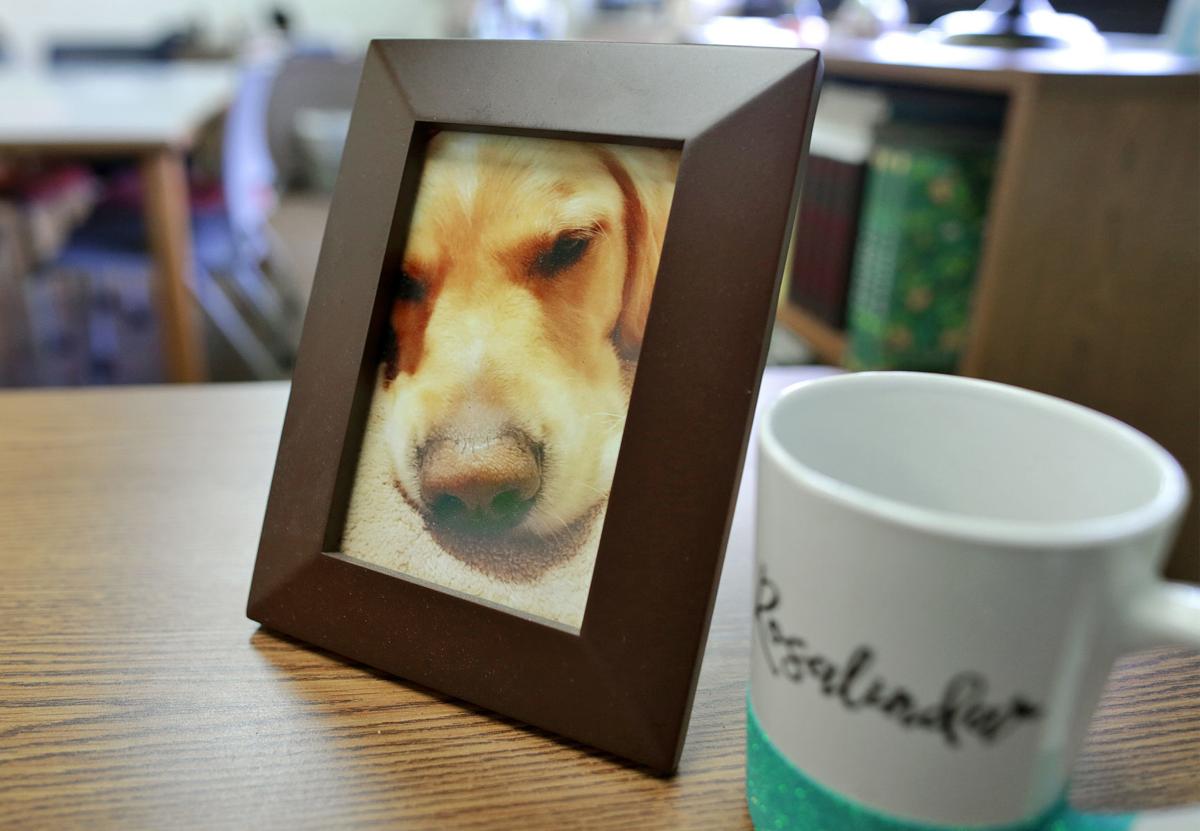 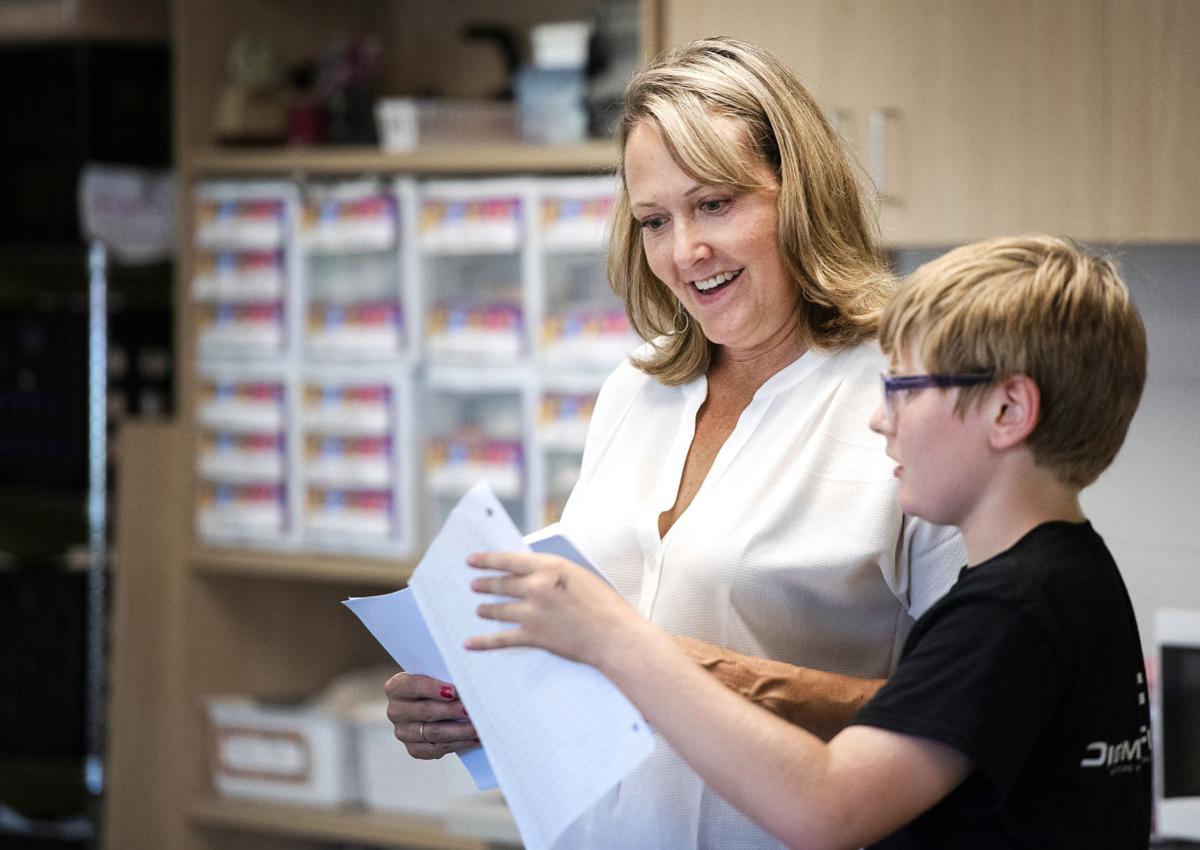 Teacher Lassity Sullivan talks to fifth grade student Malcolm Baker on Tuesday, Sept. 17, 2019, at Lincoln Elementary School in Whitewater. She has been teaching for 29 years. 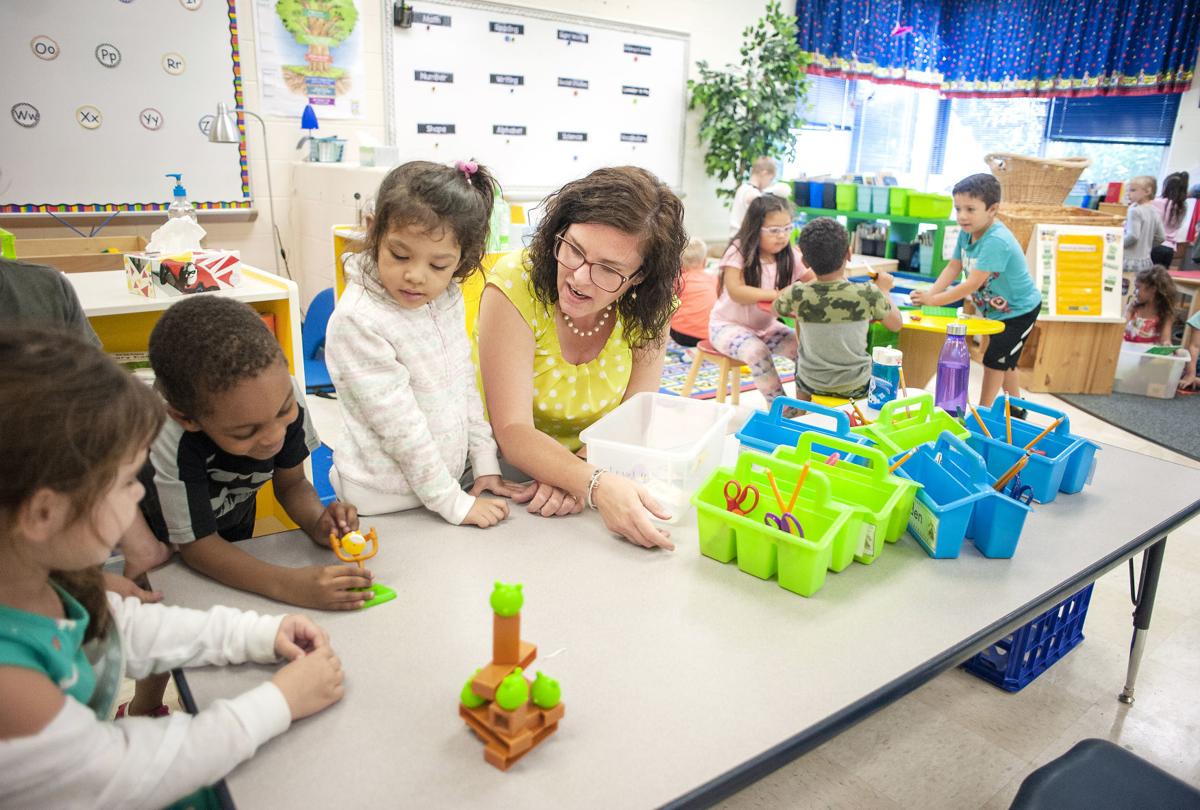 Teacher Shannon Frye plays a game with her kindergarten students Tuesday, Sept. 17, 2019, at Lincoln Elementary School in Whitewater. She said being a teacher today is "amazing and exhausting all in one."

In her head, Rosalinda Martinez knows she has to take care of herself.

But in practice, the Whitewater Middle School teacher acknowledges she hasn’t always done that very well.

“It’s really hard. I have to be honest. It’s really hard, and I don’t always do the best job,” she said. “I have reached burn out sometimes. It happens, and it’s hard.

“Now I’m crying,” she continued. “I can’t pretend it’s all peachy because we do burnout sometimes, you know? It happens.”

Sometimes during lunch—the lunches when she’s not meeting with any of her students—she will close her door and meditate for a couple of minutes. Sometimes, she runs home to spend 10 minutes with her golden retriever, Texas.

Shannon Frye, a kindergarten teacher at Whitewater’s Lincoln Elementary School, said she takes care of herself by spending time with her family at sporting events. Her work through her church, First United Methodist, also keeps her grounded. She likes to travel and read, too.

Lassity Sullivan teaches fifth grade at Lincoln. She loves traveling with her two kids and hiking. She said her co-workers are some of her best friends, and their support eases the stresses of teaching.

“That makes everything a lot easier,” Sullivan said.

Lanora Heim, director of pupil services for the Whitewater School District, has seen the trauma students are bringing to classrooms today—homelessness, neglect, suicidal thoughts and more.

But she also knows supporting teachers, who are taking on more and more to care for their students, is “a real critical mission” for the district. More support could also keep teachers from leaving.

“There’s a lot of turnover in education right now,” Heim said. “We want people to go into the teaching profession and know that they’re going to be supported and cared for and valued. And that’s not always the case right now in society.”

To Martinez, her job of nine years is incredibly rewarding, but at times it’s overwhelming. Frye, herself in the profession for 18 years, gave a similar answer: Being a teacher today is “amazing and exhausting all in one.”

Metaphorically, Frye said, her bucket is filled every day watching her kindergartners grow and learn. But the consuming worry is emptying her, too. Did one kid get on the right bus? Did another’s wet clothes get taken out of his backpack? Is another getting fed?

Some interviewed for this story said children are suffering from more trauma in 2019 than they used to. Some said it’s possible trauma is just more in the open today.

Martinez said she is having to fill out more reports of child abuse. Heim said Whitewater has more homeless students than ever before. She also said during an Aug. 26 school board meeting that district students have historically struggled with depression and suicide.

Sullivan, who has been teaching for 29 years, said she will take students in need and sometimes their siblings under her wing. On weekends, she’ll take them to Madison for the farmer’s market, to a pancake breakfast or to the aquatic center, for example.

But the success with those efforts has been mixed. She said one student she taught years ago took his own life last year. Another former student approached her at her other job as a waitress and said he was been doing well but was concerned for his brothers.

Even though some former students are now in their 20s, they still seek out someone who once listened to them, Sullivan said.

“And I’ll tell you that I’m not the only teacher in the district that does this,” she said. “It’s just really hard to be in the class every day and see these kids and not want to help them.”

Because Martinez has served as a liaison of sorts for the Hispanic community, families come to her in times of crisis, sometimes before they go to the police, she said.

In 2018, Martinez said she took in two district students who lost their parents to a murder-suicide. She said the students called her the moment they feared something was wrong, and Martinez kept them in her care for nine months before reuniting them with family out of state.

“I’m glad I was their trusted adult and that former teacher they could count on in those moments,” Martinez said.

“Our jobs don’t end there,” she said.

Teachers, Heim said, are the district’s biggest asset. They’re a large majority of the budget, “and they are the most important resource we have.”

So what is being done to support them?

Heim spoke highly of the Compassion Resilience Toolkit, which has 12 modules for people who care for others. It includes lessons on self-care and setting boundaries, for example.

She said the program had a “really big impact” early on when teachers told her they felt more refreshed.

All of the district’s schools have a “sunshine committee” or similar group, Heim said. They step in for celebrations of something positive, such as a marriage or new child, and provide support during something negative, such as a funeral.

The committee acts behind the scenes and arranges for co-workers to attend events, buy flowers, get cards or show support in any way. She said these groups have existed for at least Heim’s 19 years in the district.

“I personally have had tough moments in my life,” she said. “To have that piece has been such a comfort.”

A lot of times, teacher support is collaborative and informal—ranging from venting to co-workers, picking others’ brains about problems or filling in for the teacher across the hall so they can go to the bathroom.

“My biggest piece … would be to never try to do it all by yourself,” Heim said. “That’s too great of a task. That’s a big burden.”

‘We are all in’: Whitewater schools expand mental health support services

Perhaps if teachers are overwhelmed with the extra care needed by students carrying trauma, these new positions could ease that burden.

Some praised the new additions and the district’s support services for teachers.

Martinez said she is “absolutely” happy with the new additions. But she knows they didn’t appear by luck—“Those came because of what we voiced last year and what we demanded we needed. It didn’t happen overnight, but they were things that needed to be in place.”

Teachers, she said, have the roles of counselor, social worker and nurse, too.

Last year in particular was quite difficult. Before explaining that, Martinez paused to pick the right words. It was hard to share with the district how teachers need help because she said their days are centered on supporting students.

Nonetheless, she said support for teachers was lacking. Some students had “significant trauma” and came from “challenging households.” Efforts to help them eventually got “out of control.”

“It was a somewhat difficult year last year not only for me but for a lot of colleagues. We lost a lot of staff,” Martinez said. “So, yeah, burnout really happens.”

Last year, Frye said, she helped start a support group for teachers with UW-Whitewater graduate student counselors called Healing Path. Teachers could talk about vicarious trauma and learn how to better care for themselves like they care for others.

But the program “fizzled out,” was not well attended and is no longer running, she said.

Sullivan said the district tries to prevent burnout, but some years are just more challenging than others. How do teachers avoid burnout?

And she hopes that momentum carries “as long as it can.”

But Martinez’s journey will continue away from Whitewater. While emphasizing that she loves her job, she said she is planning to leave in November or December to be closer with family.

“My students, community and families are extremely important to me, and I’ve tried my best to be an advocate for them in and out of school,” she said in a follow-up email. “I mentioned that finding a balance is what helps keep things in order.

“I struggled with that sometimes.”