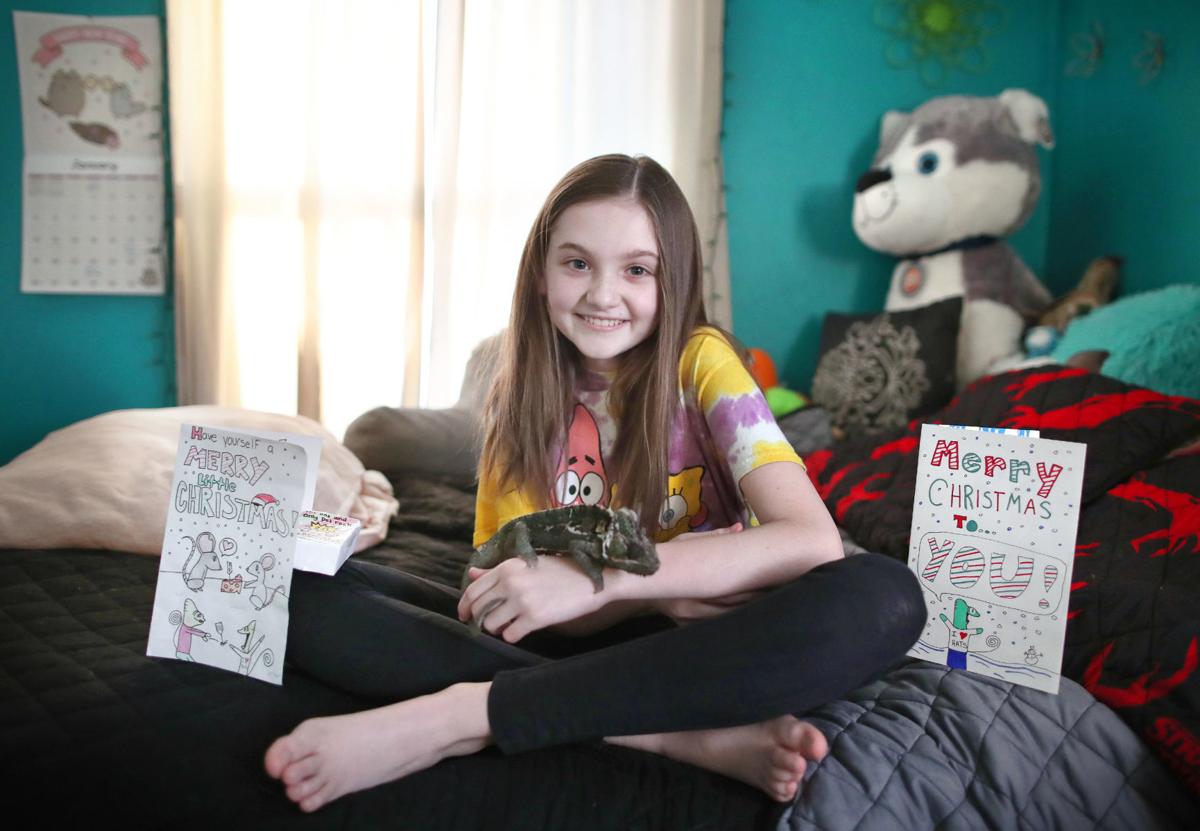 Ava Wawroski, 11, holds her chameleon while flanked by two Christmas cards she made and pet rocks she creates to sell. Ava makes cards for people who are admitted to SSM Health St. Mary’s Hospital-Janesville over the holidays. 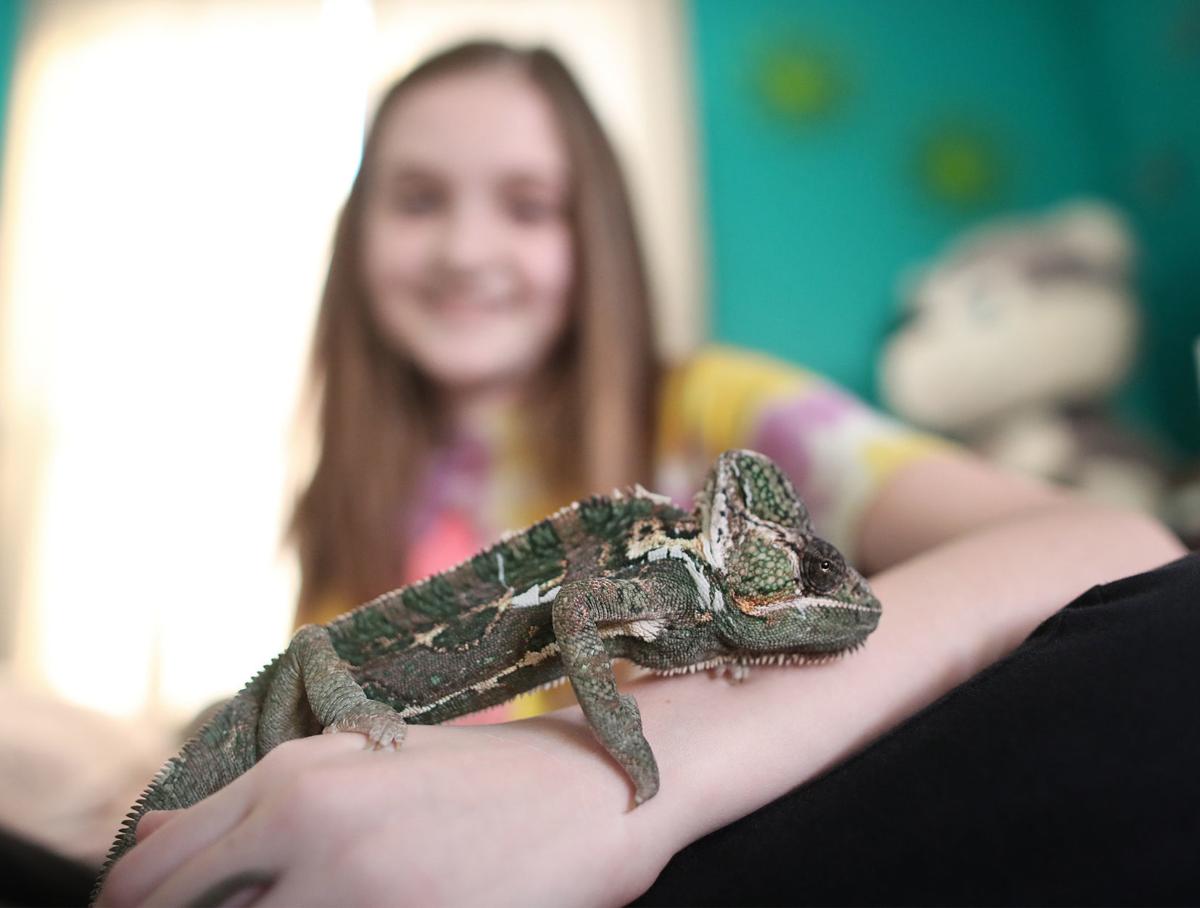 Ava Wawroski, 11, holds her chameleon at her Milton home. Each holiday season, Ava makes cards for people in a Janesville hospital. 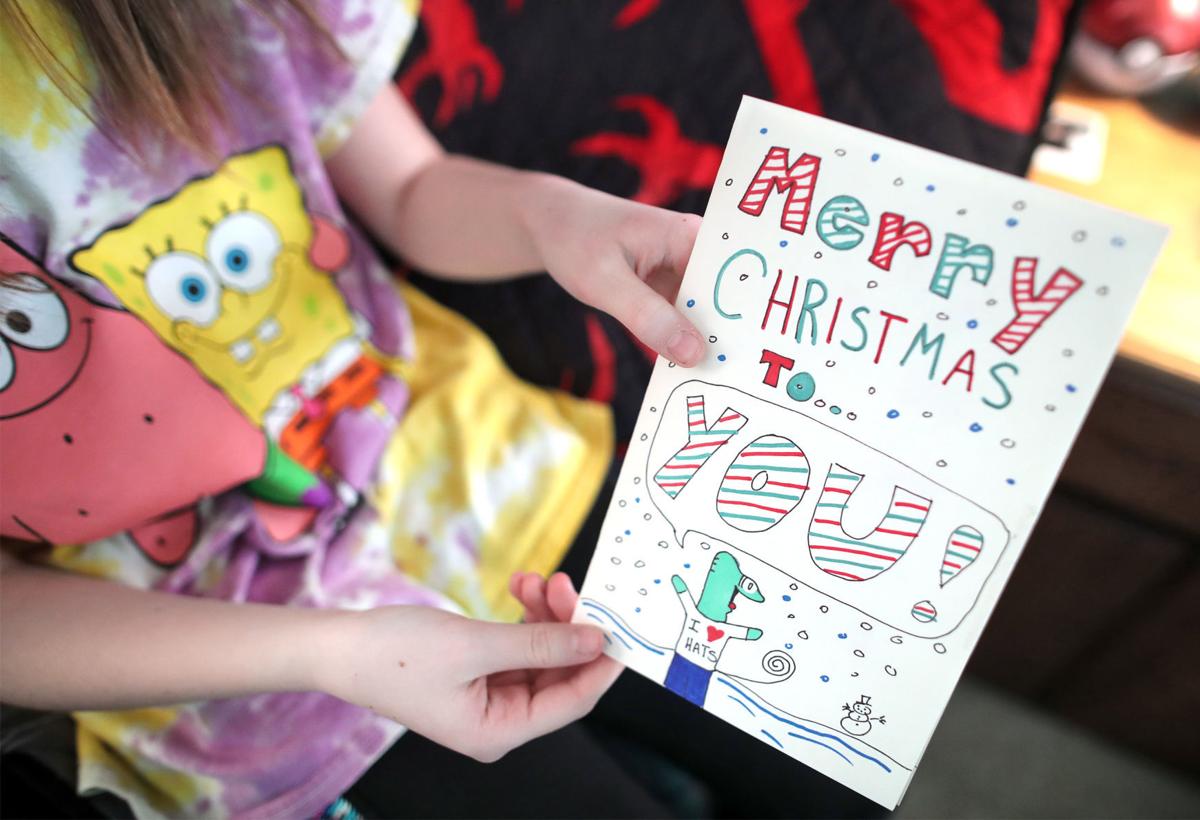 Each holiday season, Ava Wawroski, 11, makes cards for people in a Janesville hospital. 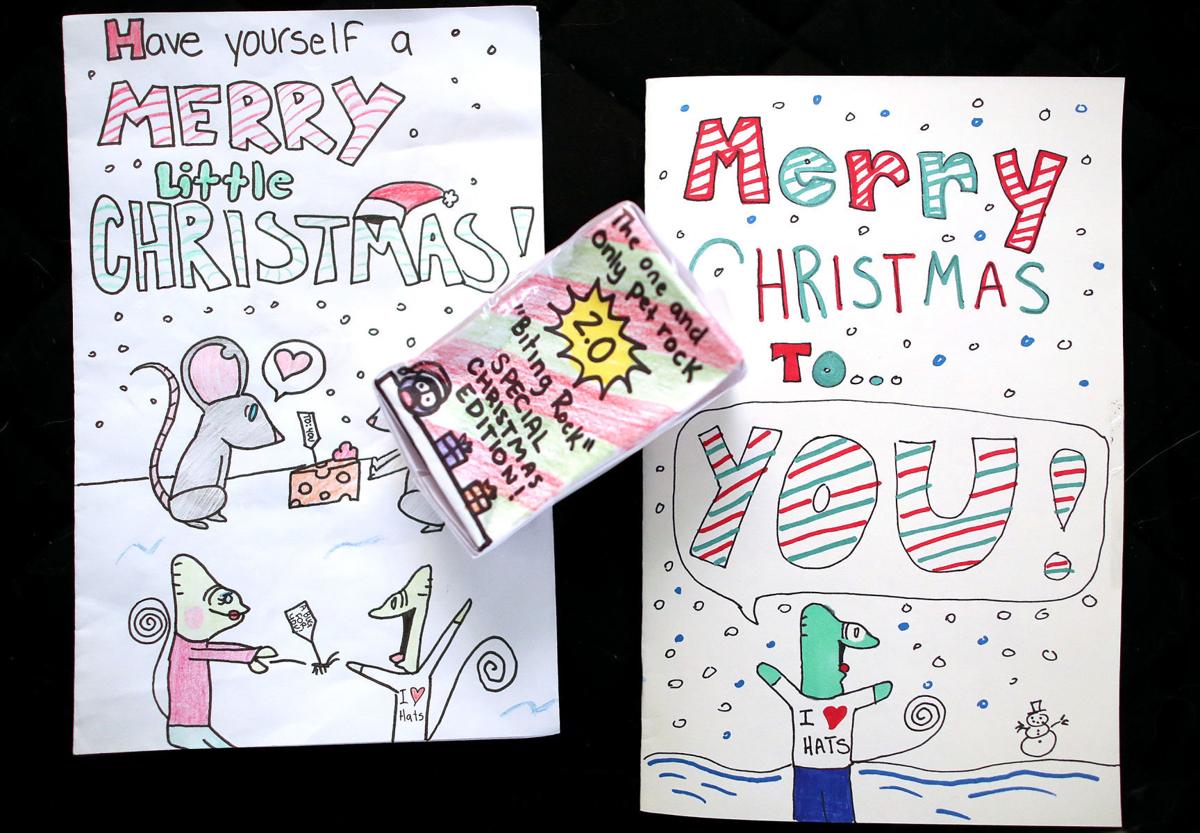 A couple of the cards Ava Wawroski, 11, has made for people hospitalized during the holidays. There’s also an example of the pet rocks she sells.

Ava Wawroski is a busy 11-year-old.

She has her own business.

She has seven pets—three lizards, a cat and three dogs—and she once ordered a pet cockroach on Amazon.

But right after Halloween every year, Ava carves out time to start making Christmas cards for people who spend the holiday season in the hospital.

Every winter since she was 5 years old (or maybe 4 or maybe 6; the age is up for debate) Ava has made cards for people who are admitted to SSM Health St. Mary’s Hospital-Janesville over the holidays.

She started making cards, she said, because she would want someone to make her feel special if she was in the hospital.

A woman who was in the hospital for Christmas told The Gazette about the card she received and how much she appreciated the gesture.

The woman chose not to share her name with The Gazette.

The woman’s card came with a dollar inside, which she said she gave to a local charity.

It started with a handful of hand-drawn cards and has grown to a dozen or more cards with candy canes or money inside. This year, she made 15 or so cards and donated books and pet rocks for children in the hospital.

Ava runs a business selling pet rocks out of a shop her father’s friend owns, she said. She paints the rocks to look like animals, Ava said.

The business began when Ava wanted an alto saxophone, the second of the two instruments she plays. Her parents told her she had to pay for half the saxophone on her own.

Ava was successful, Wayne said, and she continues to sell her rocks and pays for the business and the cards with her own money.

The card the woman received says, “Have yourself a MERRY Little CHRISTMAS!” with a picture of two mice and two lizards exchanging gifts.

Inside, it says “Happy Holidays” with a picture of a lizard disco dancing.

Some cards are made with brass fixtures to make spinning components or have pop-up messages inside, she said.

Lindsey Harnack, administrative supervisor at the hospital, passes out Ava’s cards to patients every year.

It’s difficult for patients to remain positive while spending Christmas in the hospital, but Ava’s cards make it a little bit easier, Harnack said.

Patients can’t help but smile when they get the cards, Harnack said.

This year, Harnack gave a card to a patient who is blind, she said.

The patient lit up when Harnack described the card’s drawing: a lizard licking a flag pole, like the scene from the movie “A Christmas Story.”

The patient became emotional when she learned Ava’s card had a dollar inside. The patient insisted the hospital use the dollar to buy something for Ava, but hospital staff told the patient to keep it, Harnack said.

Last year, the hospital gave Ava a bouquet of flowers for Valentine’s Day to say thank you, Harnack said.

Hospital staff hopes to have Ava play the piano in the lobby next year during the holidays.

“She’s such a wonderful little girl,” Harnack said. “Not many kids would do something like what she does.”

Wayne is proud to see his daughter spread joy without the expectation of anything in return, he said.

Ava hopes next year she can make more cards and give them out at more hospitals, she said.

When she grows up, she hopes to be an architect or an entomologist, a person who studies bugs.

“It feels good to know I am making a difference in the community,” Ava said. “I know I can make positive vibes in town.”