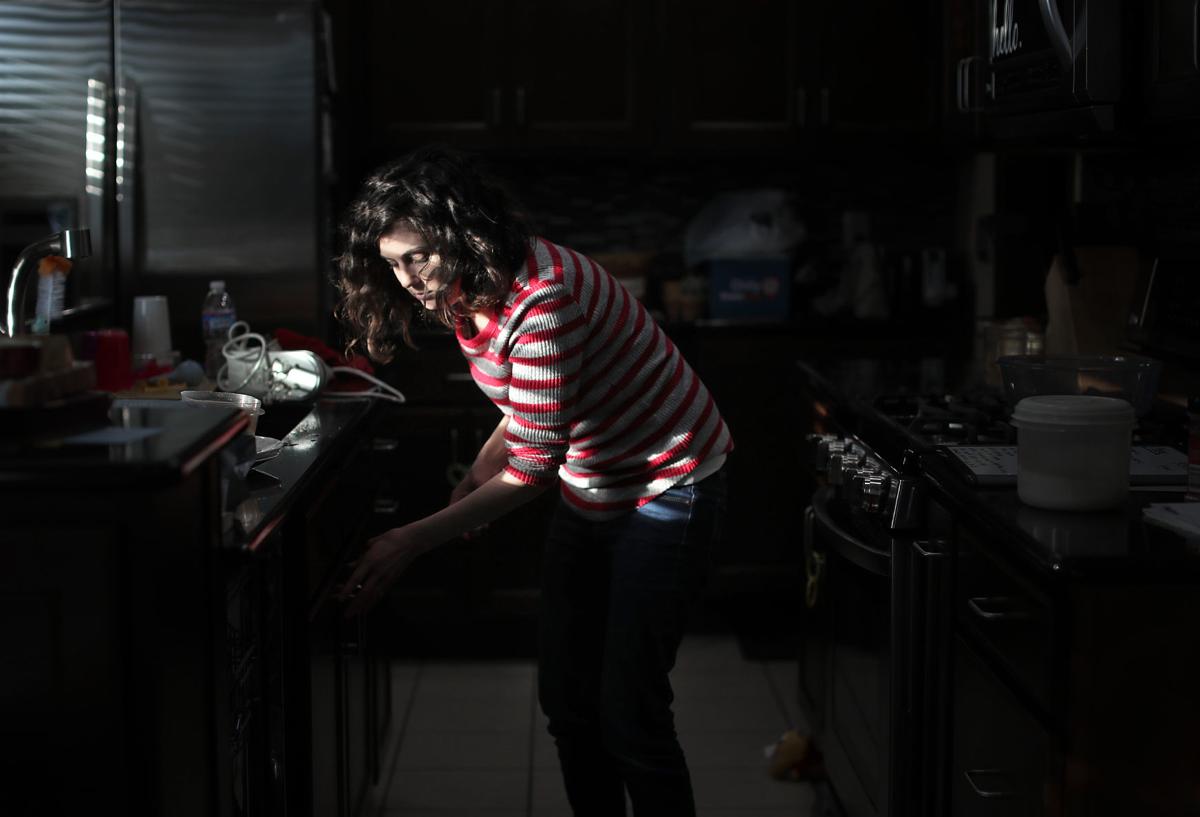 Light from a kitchen window illuminates Ashley Friis as she prepares a birthday treat for her fiancé while home after work with her 2-year-old daughter. Friis in 2009 lost both of her kidneys to the rare disease atypical hemolytic uremic syndrome (aHUS). She received her a kidney transplant from her mother in 2011, but pregnancy spurred the return of her aHUS, ruining the transplanted kidney. She now waits for another kidney donor. 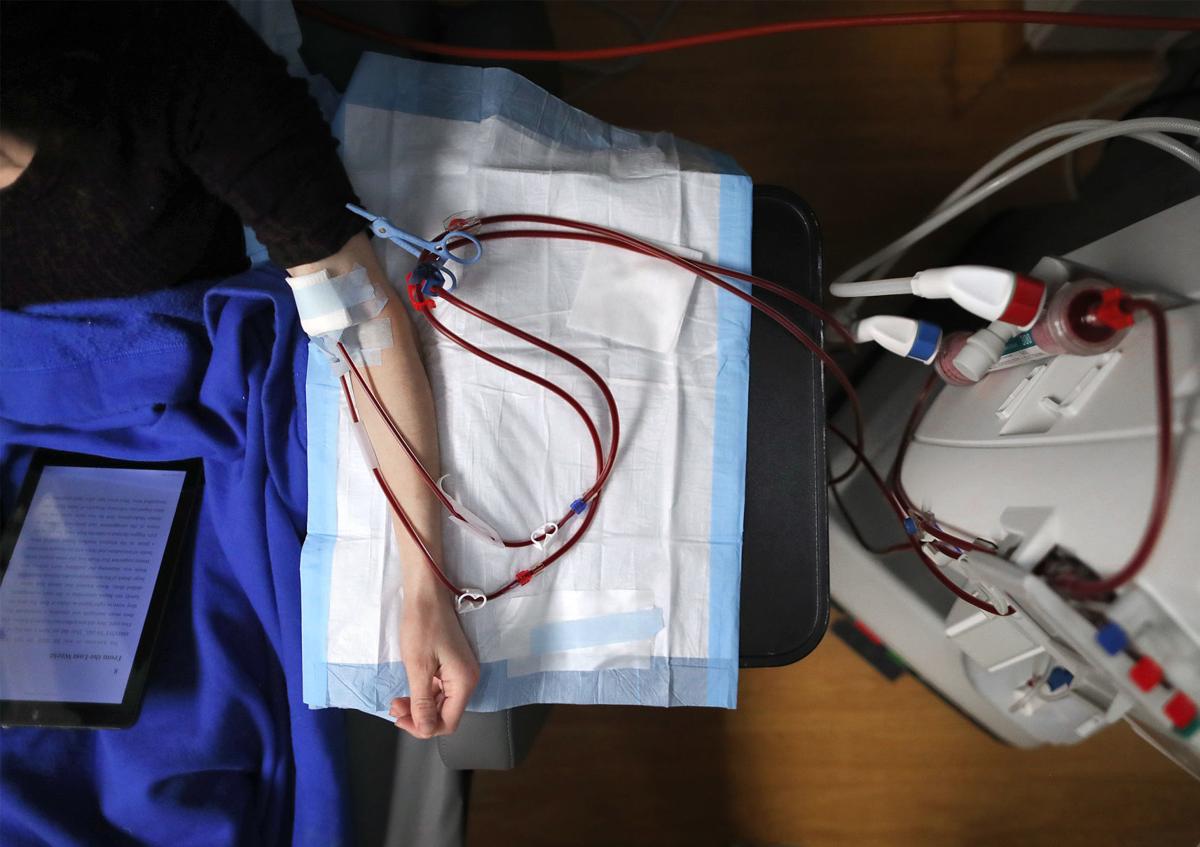 Ashely Friis spends an average of three hours each Monday, Wednesday and Friday in Mercyhealth Hospital and Trauma Center's dialysis center and attends biweekly blood infusions in Madison. Soon after the premature birth of her daughter in February 2017, Friis was put on dialysis because her kidney, given by her mother, failed. 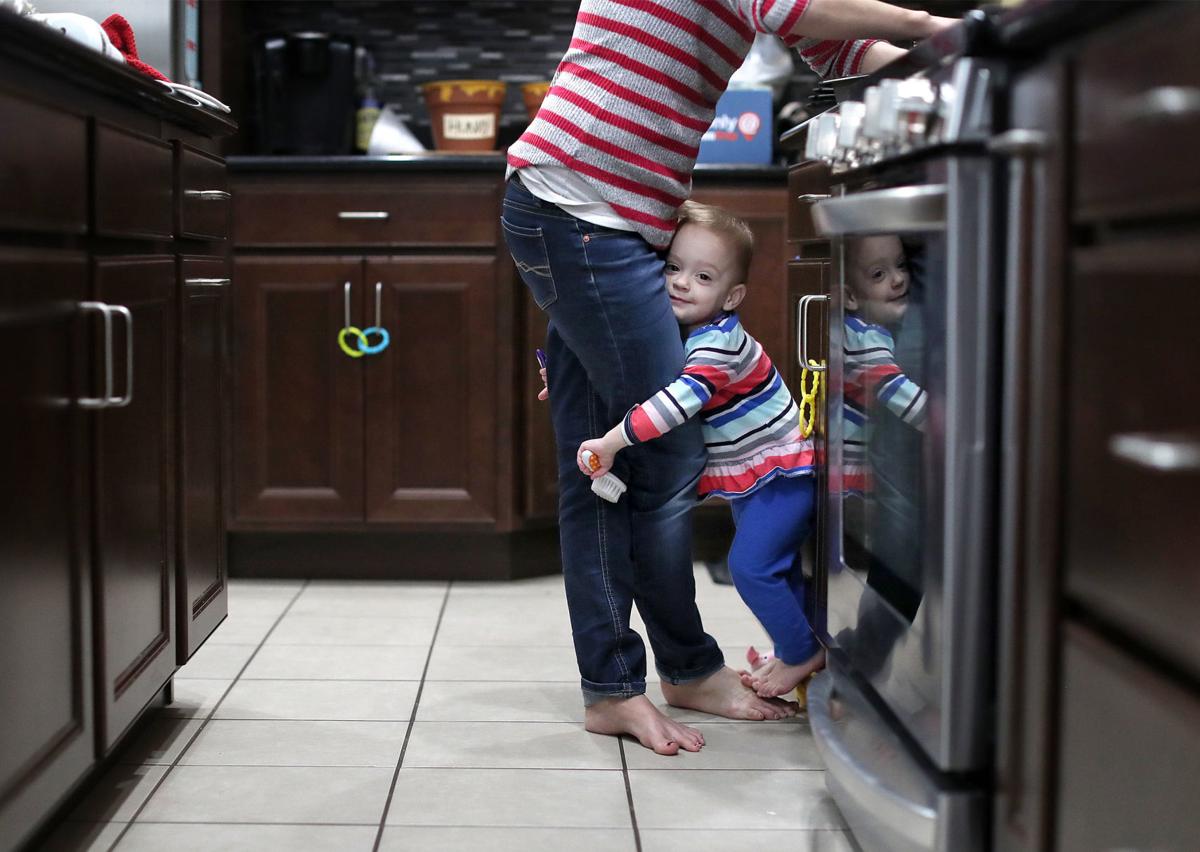 Aidynn, 2, holds on to her mother’s legs while Ashley Friis works in the kitchen after a part-time shift at Adams Elementary School. Friis continues to do everything a young mom needs to do despite fatigue from treatment and her disease. 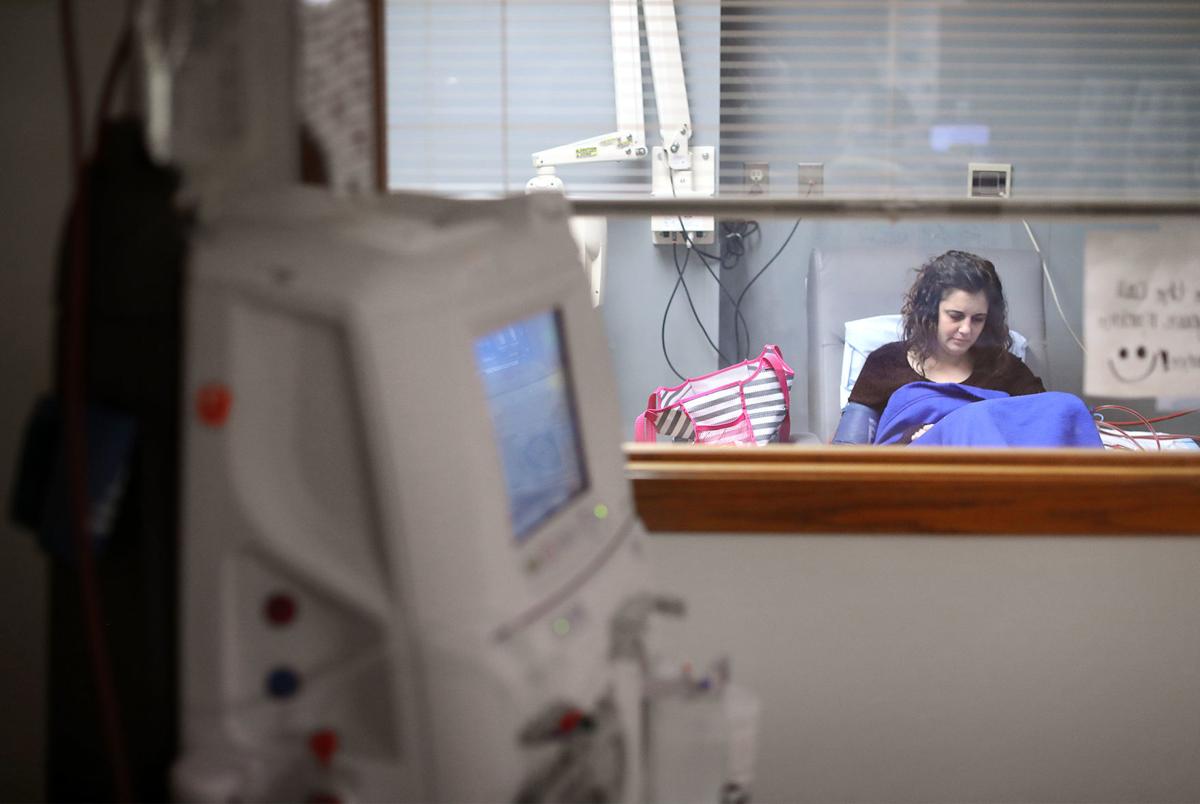 Ashley Friis spends time during dialysis reading books and watching Netflix. She is among 1,553 people on waiting lists for kidneys in the state, according to the Organ Procurement and Transplantation Network. 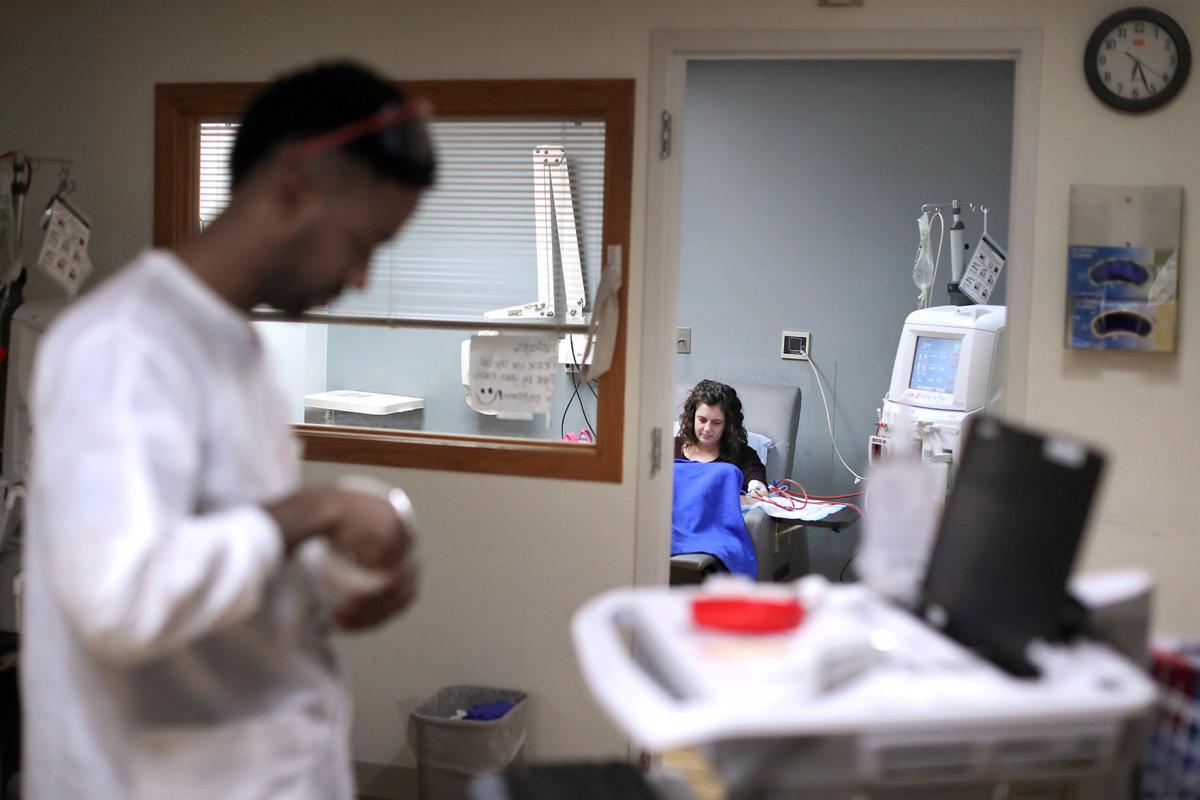 Ashley Friis watches a movie on her tablet while attending dialysis. “I feel like it can be really isolating sometimes,” Friis said. 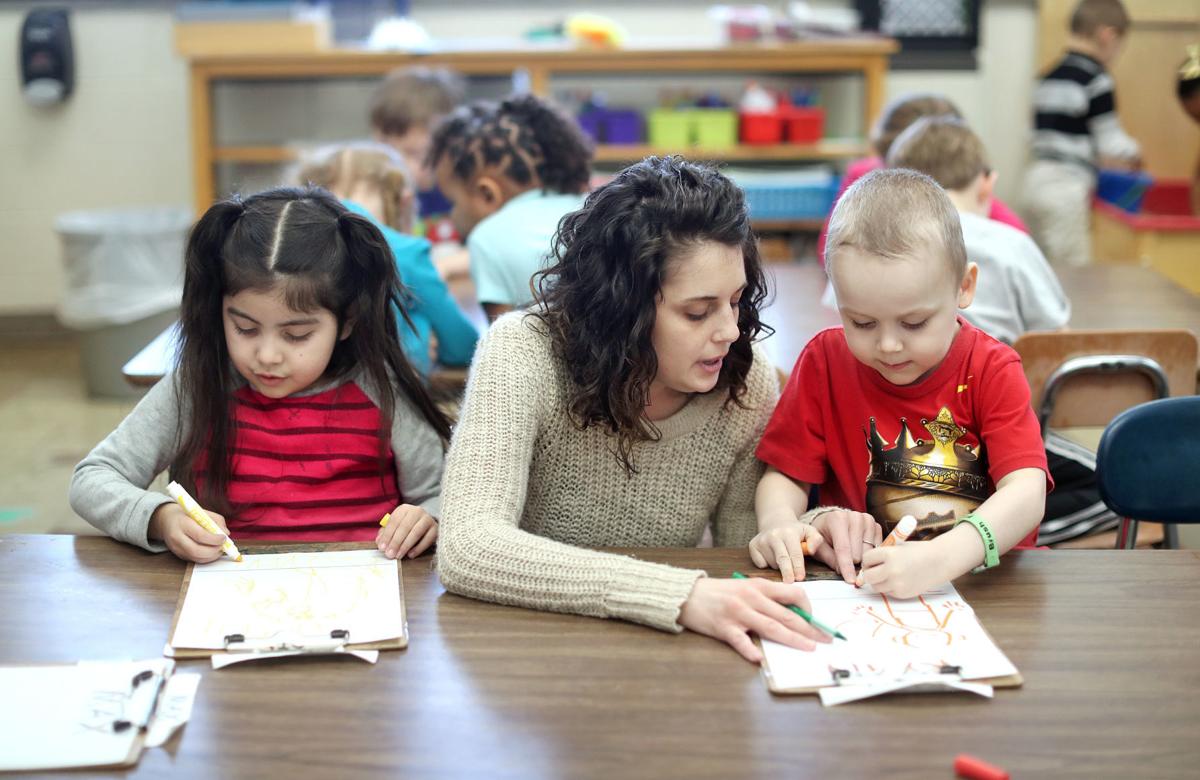 Ashley Friis helps two students during her part-time job at Adams Elementary School. Friis works part-time because working too many hours would disqualify her from insurance that helps pay for her expensive aHUS treatment. 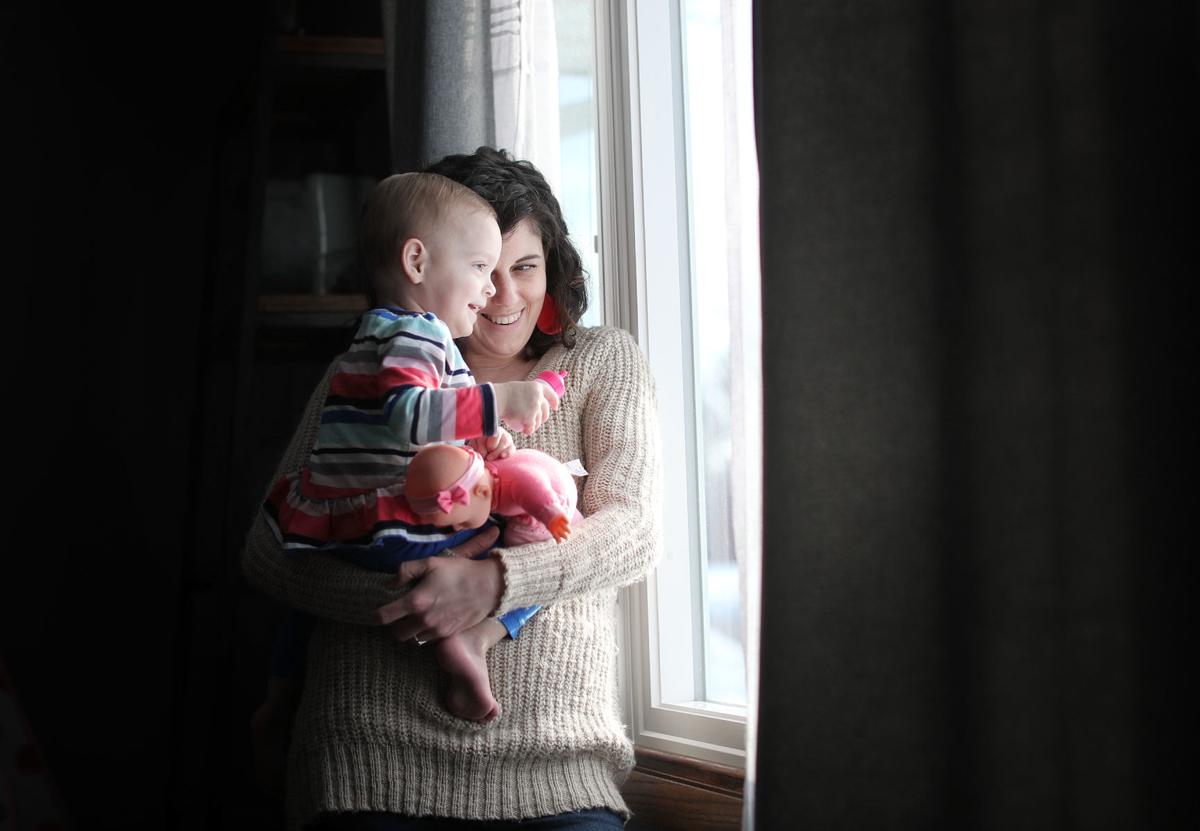 Ashley Friis and her daughter Aidynn watch through a window as stepdaughter Kylie plays outside with a neighborhood friend. Medication early in her pregnancy might have prevented the recurrence of a disease that ruined her transplanted kidney. “I would never trade her (Aidynn) for my kidney. I would never rather have my kidney than her, but that knowledge beforehand would have been useful,” Friis said. 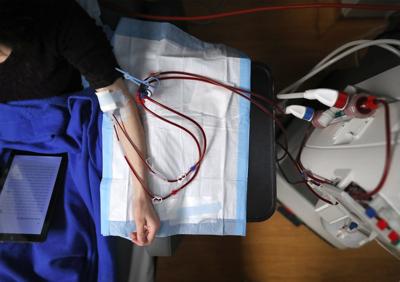 Ashley Friis said she would never trade her daughter for her kidney, but she wishes somebody had warned her that pregnancy might rekindle her kidney disease.

She was thrilled when doctors told her she could get pregnant.

Her pregnancy would be high-risk, but doctors felt confident everything would be OK.

It wasn’t long before Friis was pregnant with a baby girl.

About six months later, Friis’ daughter Aidynn had to be delivered early because the baby had stopped growing in utero and Friis’ health was declining, she said.

Her pregnancy had triggered a recurrence of atypical hemolytic uremic syndrome—a rare disease that causes red blood cells to break down and kidneys to fail, said Ehteshamul Anjum, nephrologist and medical director at Mercyhealth Dialysis Center in Janesville.

Friis had been diagnosed with the disease about 10 years earlier, when it caused both her kidneys to fail. Two years after that diagnosis, Friis received a kidney transplant from her mother, she said.

Aidynn was born 1 pound, 9 ounces at 27 weeks in February 2017. Soon after, Friis was put on dialysis because her kidney had failed again.

The 31-year-old Janesville woman now needs another transplant and is looking for a living donor. She has been searching for nearly two years.

“More than anything, I just want to be home with my family and not miss out (on time) with my kids,” Friis said.

Friis is one of 1,553 people on waiting lists for kidneys in Wisconsin, according to the Organ Procurement and Transplantation Network.

Friis continues to do everything a young mom needs to do: work, pick up her step-daughter from school, play with her toddler, bake birthday treats for her fiance.

But she does it while being constantly fatigued from treatment, spending about nine hours a week in dialysis and attending bi-weekly blood infusions in Madison.

“I feel like it can be really isolating sometimes,” Friis said. “If I had a nickel for every time I said, ‘Sorry, I can’t. I have dialysis...’ I just feel like I miss out a lot on life. It’s just not fair, basically.”

In 2009, doctors put Friis into a medically induced coma for four days while they worked to lower her blood pressure.

Her kidneys were failing, and she was diagnosed with aHUS, Friis said.

AHUS is rare, and little is known about it. Researches think the gene mutation that causes the disease might be genetic, but research is limited with few reported cases, Anjum said.

Anjum said he has treated one other woman in Janesville for the disease. That woman is still in intensive therapy but soon will be taken off dialysis and is expected to do well.

Having two women diagnosed with the disease in Janesville is “very surprising,” Anjum said.

There was no treatment for the disease when Friis was diagnosed, she said.

After two years of dialysis and plasmapheresis treatment to clean her blood and plasma, Friis was cleared of aHUS.

Once the disease was gone, it would be gone for good, doctors told Friis.

That information, she now knows, was wrong.

Doctors didn’t know in 2009 the disease could come back, but seven years later, when Friis was considering getting pregnant, doctors knew more.

“They expected nothing but the best for this (pregnancy). But someone along the line should have said, ‘Hey, you know your (a)HUS can come back with stressors like pregnancy,’” Friis said.

Medication early on could have prevented the kidney failure, Friis said.

“I would never trade her (Aidynn) for my kidney. I would never rather have my kidney than her, but that knowledge beforehand would have been useful,” Friis said.

Friis is on the deceased donor list at UW Health System, but a living donor is preferred, she said.

A living donor provides better chances of survival because the organ is less likely to be injured before or during transplant, Anjum said.

Anjum has seen a number of patients need a second transplant on the same organ. Getting a transplant is always better than living life on dialysis, he said.

Friis has posted on social media looking for someone willing to be a donor.

Through social media, Friis met Anne Reece, a Beloit woman who donated a kidney to her mother in 2000. Reece’s donation gave her mother 11 extra years of life, inspiring Reece to be an advocate for organ donation, Reece said.

When someone is interested in being a live donor, they first have to go through a series of tests to determine whether they are a match for that person, Reece said.

The process takes time. Reece and her husband, Brian, have made themselves available to talk to anyone with questions about being a living donor, she said.

An anonymous donor reached out to the UW Transplant Team at the end of 2018 as a potential donor for Friis but was ruled out in January for medical reasons, Friis said.

“It was still really hard to hear that they officially ruled that person out, but I was trying not to get my hopes up,” Friis said.

Doctors won’t let Friis get another donation from a family member because of a suspected genetic link with the disease, she said.

The genetic link also means there is a chance Aidynn will have aHUS, Friis said.

The process for choosing who gets organs from deceased donors is complicated, Anjum said.

Factors for kidney allocation include wait time, donor/recipient compatibility, age, location, blood type and other factors, according to the Organ Procurement and Transplantation Network.

Transplant candidates are screened through a computer application to determine the best match for an organ once made available, according to the network.

There are 897 people waiting for kidney transplants through the UW Health System, according to Organ Procurement and Transplantation Network data.

Of the 1,553 people waiting for kidneys in the state, 250 of them have been on wait lists for five or more years, according to the data.

Friis has been on a wait list for about two years along with 357 other people in the state, according to the data.

Being on the deceased donor wait list can feel agonizing, which is why Friis hopes a living donor will step up to help her, she said.

Aidynn turned 2 years old in February. She has a strong personality and, at this point, no major health concerns, Friis said.

The exhaustion from treatment makes it difficult to keep up with a buzzing toddler, Friis said.

“It is really hard to be as active as I want to be when I can barely get myself off the couch,” Friis said.

Living with aHUS leaves Friis with little control over her life.

Friis has to work part-time at her job as a paraprofessional at Adams Elementary School because working too many hours would disqualify her from insurance coverage that help pay for her expensive aHUS treatment.

Hours spent at dialysis take away from time Friis could spend with her children, which has been the most difficult thing for her, she said.

“I would never say we wouldn’t have had her (Aidynn) or would have done things differently,” Friis said, “but we could have been more proactive in being prepared.”

Anne Reece, a Beloit resident and kidney donor is an advocate for donation and would is willing to help those considering donation. She can be reached by email at reecebrianne@gmail.com.

A donor at home: Janesville woman receives kidney from fiance after years-long search

Ashley Friis and her fiance, Josh Groetken, are recovering after Groetken donated his kidney to Friis last month.