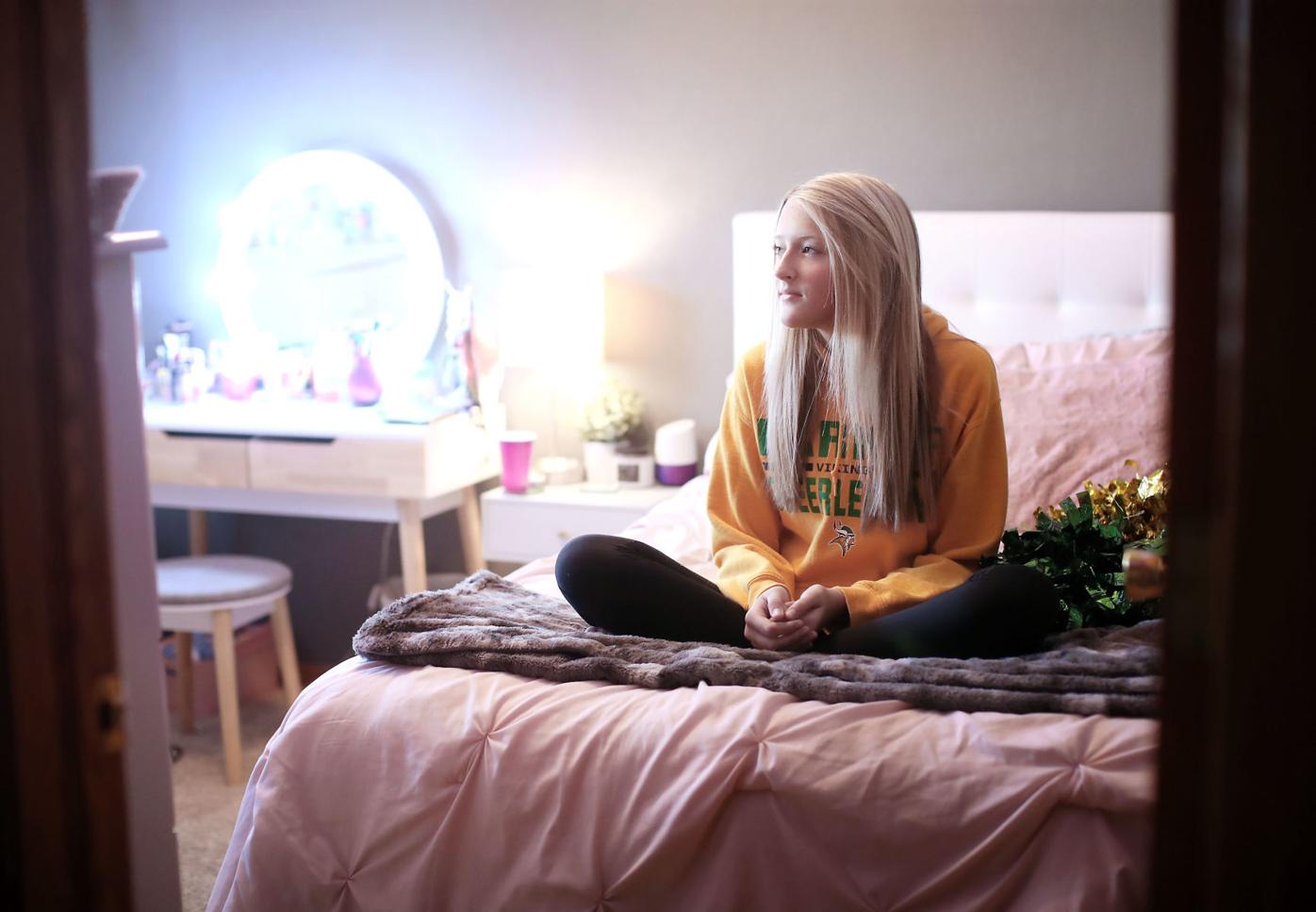 Ava Pennycook, a 15-year-old competitive cheerleader from Janesville, tested positive for COVID this summer. Months later, she is still feeling symptoms that are holding her back from cheering, school and learning how to drive. She’s what’s considered a long hauler, something doctors are just starting to learn about. 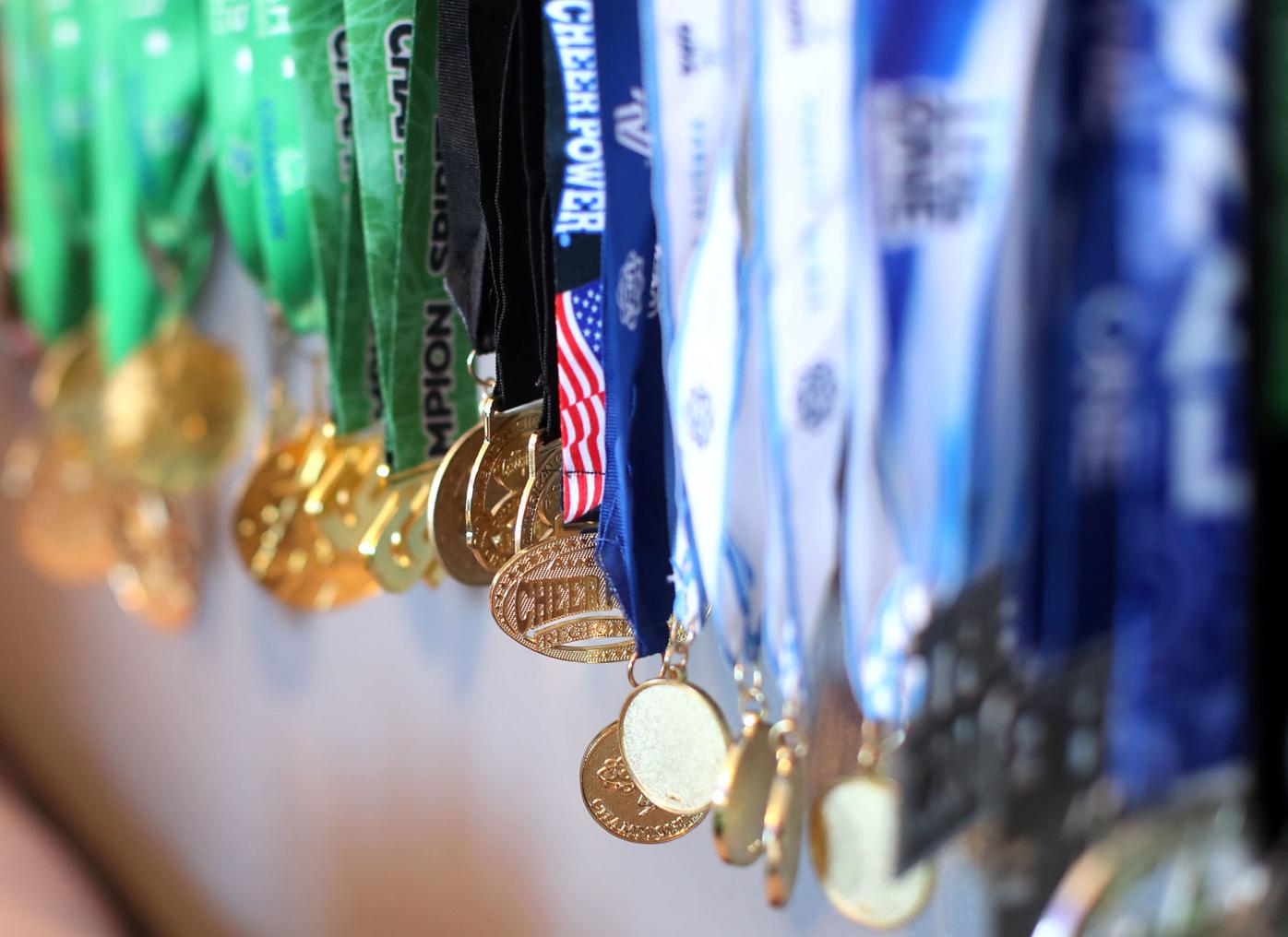 Competitive cheerleading medals hang in Ava Pennycook’s bedroom. The 15-year-old from Janesville tested positive for COVID-19 in July and is still having symptoms months later. 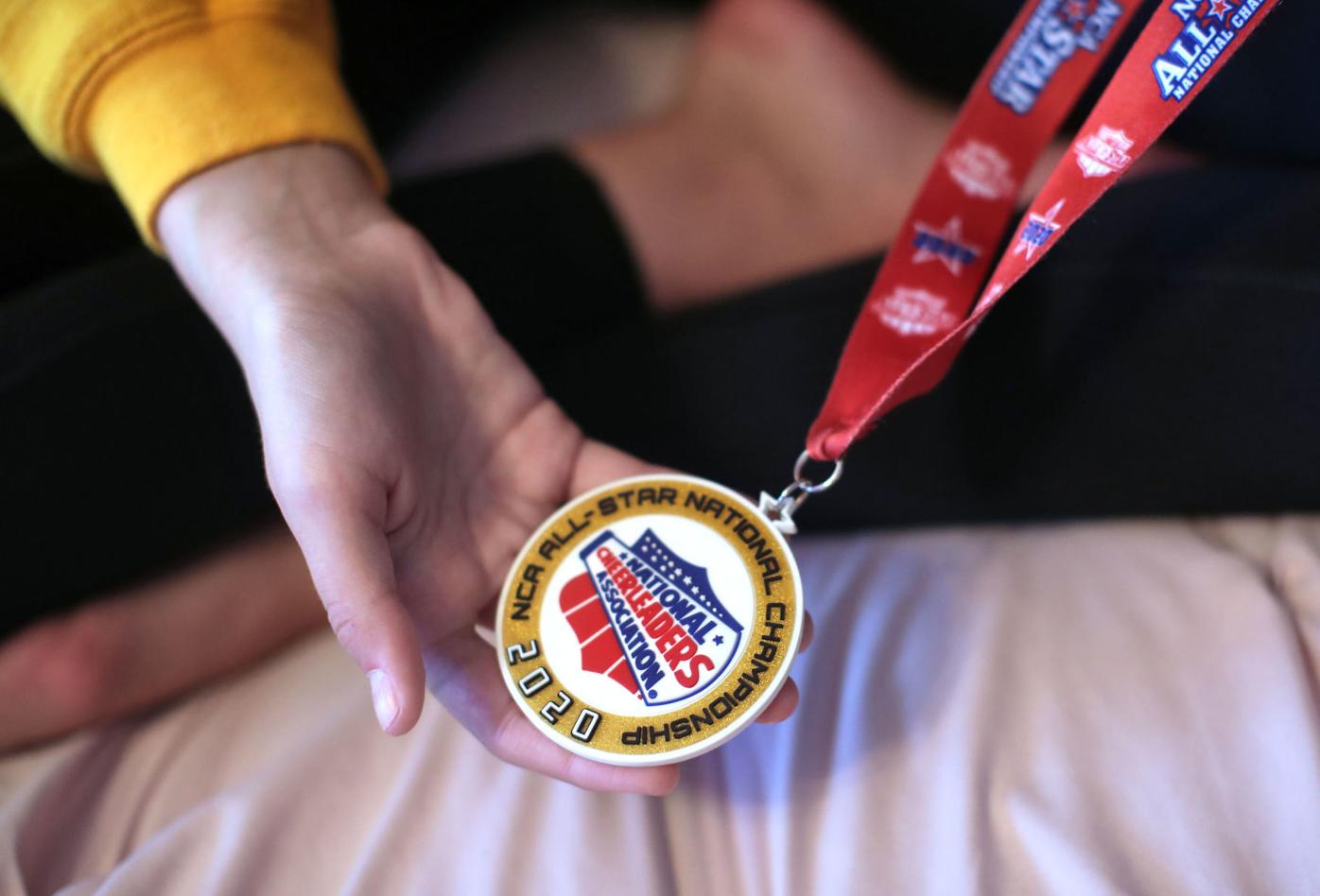 Ava Pennycook holds one her most recent awards from competitive cheerleading while inside her bedroom. Months after testing positive for COVID, Ava still feels symptoms that are holding her back from cheering, school and learning how to drive.

Ava Pennycook took a drink of flavored water and realized it tasted like nothing at all while on her way to see a doctor for what she thought was mononucleosis.

She had been fatigued, dizzy, nauseous and in pain for about six days.

On July 25, Ava learned she was positive for COVID-19, not mononucleosis.

And she’s not alone.

Long haulers experience symptoms of the disease for weeks and months after being infected with the novel coronavirus.

Although no longer contagious, long haulers live for months with much of the pain, discomfort, mental health issues and stigmas associated with the disease that has infected more than 7 million people across the country.

Ava is opposite the profile many people associate with COVID-19 sufferers: She is young, athletic, healthy and had no pre-existing health conditions prior to being infected, her mom Amy Pennycook said.

Mark Mounajjed, infectious diseases specialist at Mercyhealth, said the risk of becoming seriously ill from COVID-19 looms for everyone.

It is inaccurate to believe COVID-19 only harms the elderly or sick, Mounajjed said.

Doctors are unsure why some people become long haulers and others do not, Mounajjed said.

The uncertainty around COVID-19 is why people should remain cautious and abide by safety guidelines such as wearing masks and social distancing, Mounajjed said.

Ava said everyone should take COVID-19 seriously because her experience has changed her life dramatically.

The Pennycooks followed every safety precaution and stayed home as much as possible when the pandemic hit, Amy said.

As summer came, Amy wanted her daughter to stay safe but continue to do things normal teenagers do— learn how to drive, get a job, hang out with friends.

Amy said she let Ava start a new job at Frostie Freeze and take driver’s ed classes because both places seemed safe and the risk for Ava low.

If anyone in the family was going to suffer from getting the virus, Amy assumed it would have been her or her husband, Scott.

Ava became fatigued, dizzy and light-headed while working one day at Frostie Freeze. She had to walk away and sit down because she felt like she would faint.

Ava worked four shifts at her first job before getting sick. Her symptoms carried on so long she was not able to return to the job before the ice cream stand closed for the year.

She doesn’t know how she got the virus. None of her co-workers or driver’s ed classmates had the disease that she was aware of.

She might have gotten the virus while working, Ava said, but there is no way to know for sure.

Ava spent three weeks in bed after testing positive. Leaving her room was exhausting, she said.

She began carrying an inhaler, something she never had to do before, to help with her breathing, Ava said.

Ava is a member of Allstar Cheer, a competitive cheerleading team that travels the country to compete. Cheer season lasts almost the entire year.

Since getting COVID-19, Ava goes to Allstar cheer practice and can mainly watch or learn some of the routine. For high school cheer, she is mainly watching from the sidelines.

Ava’s high school cheer coach allowed her to postpone her official tryout until she is feeling 100%, Amy said.

Ava said it is hard to watch her peers cheer without her, but she knows the importance of not testing her physical limitations.

Meanwhile, many of the other teenage experiences are passing her by.

Ava will lose focus in the middle of a conversation or forget what someone just told her, Amy said.

Ava is scheduled to see a pediatric neurologist at the end of the month to check if there are any serious issues.

Meanwhile, Ava is going to school and trying to keep up, although exhaustion often catches up to her, she said.

There is not much doctors can do to treat long haulers, Mounajjed said.

Some people don’t get tested while the virus is active but then later get sick.

Mounajjed said he’s gotten several phone calls from community members who say they had COVID-19 months ago and are still sick.

“Not much you can do but keep going,” Mounajjed said.

Some people show no symptoms, some have a cold. Others end up in the hospital or dead. Lung damage and blood clots are being seen in groups of people who survive, Mounajjed said.

There are two things Mounajjed said people really need to know: Masks do work, and herd immunity will not happen without a vaccine.

Some people have suggested letting as many people get sick as possible to create herd immunity, but Mounajjed said that would cause a lot of pain and death and might not be effective.

The Infectious Disease Society of America in an email to members last week said the idea of creating herd immunity without a vaccine is “inappropriate, irresponsible and ill-informed.”

COVID-19 sufferers are also experiencing mental health issues surrounding the disease. Many patients are reporting having depression during or after infection, Mounajjed said.

“It breaks my heart when people say ‘I will get it (COVID-19), and I will get immune,’” Mounajjed said.

There is not enough research yet to know if and for how long COVID-19 patients are immune from reinfection.

Ava and Amy said they get frustrated by people who don’t take the disease seriously.

Some of her peers make jokes about the disease, and others don’t believe her when she said she had it and is still sick but not contagious, Ava said.

One kid joked that Ava should cough on him so he could get sick and skip school, she said.

Amy said she has worried about whether it is her fault her daughter got sick because she let Ava do some activities out of the house. Sometimes, she feels guilty.

The family has felt somewhat isolated because most people they know have not gotten sick.

Amy found a Facebook group for COVID-19 survivors, which she said has helped her feel supported and validated about her daughter’s condition.

There is little known about how long COVID-19 could impact long haulers. Amy said she worries about Ava’s future and whether this will hinder her forever.

“She’s way too young to be dealing with this,” Amy said.

COVID-19 has been about nine times more deadly than the most recently recorded flu season, according to data from Rock County's health department.