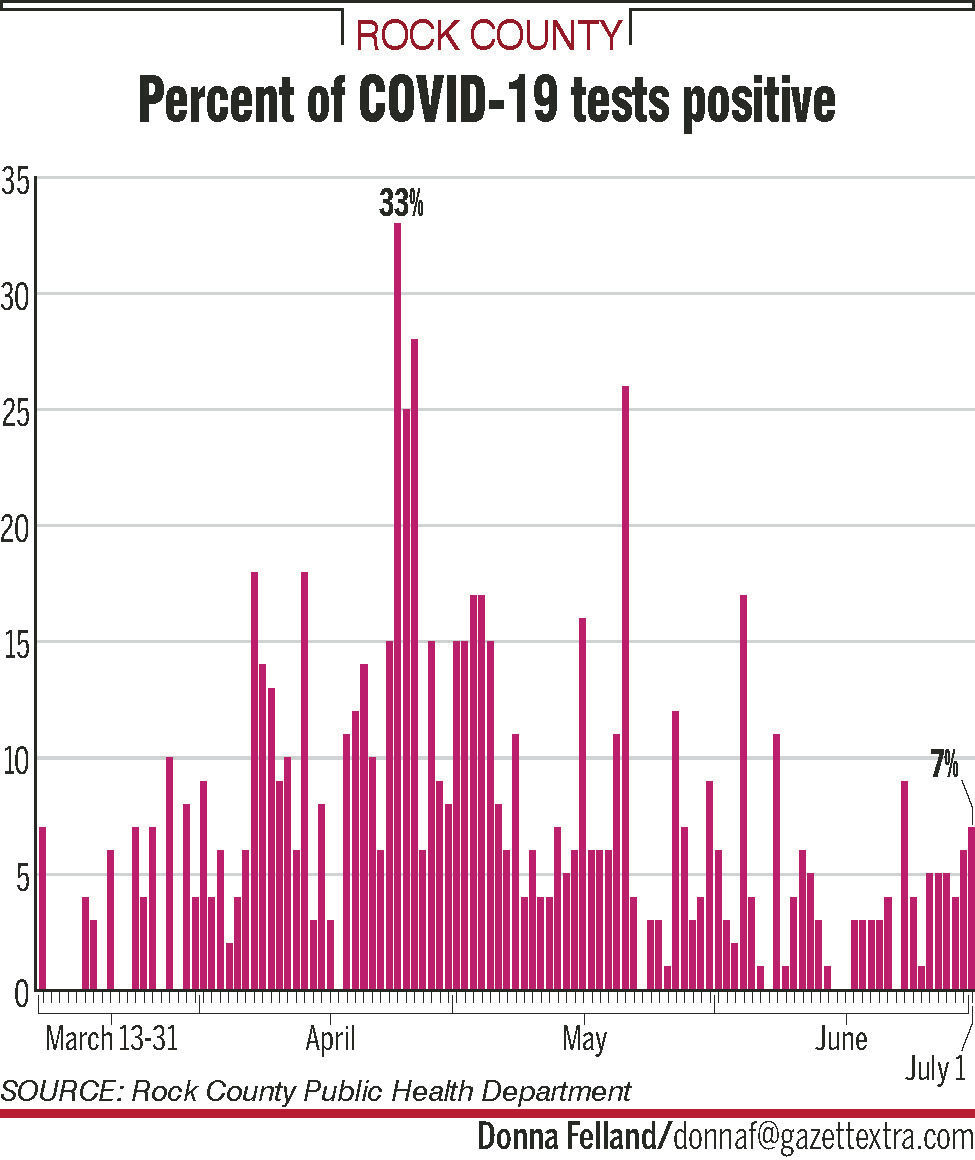 Rock County will remain in its second phase of reopening as other communities tighten restrictions because of recent spikes in coronavirus cases.

Rock County residents can prevent the spread of disease with proper safety precautions, and the Rock County Public Health Department does not believe further restrictions are needed, said Kelsey Cordova, health department spokeswoman, in an email to The Gazette.

“It is really up to each individual person to take this seriously and make decisions that help keep the county open and healthy,” Cordova said.

“The virus doesn’t move and spread without the help of people who are in close contact with other people.”

Health department data shows Rock County is seeing a similar trend as communities statewide: increasing cases in young people in their 20s, according to a news release.

Of the 223 confirmed cases in Rock County in June, 25% were in people between the ages of 20 and 29, according to the news release.

Young people are not likely to become severely ill from the disease but can spread it through the community and to people who could be adversely affected, according to the release.

Dane County on Thursday prohibited indoor service at bars and reduced the allowed capacity at restaurants from 50% to 25% after a spike in local coronavirus cases, many of which are connected to people gathering in bars.

Cordova was not able to respond to questions from The Gazette about whether cases have been spreading in Rock County bars by press time.

Representatives from the state Department of Health Services in a news release Thursday said nearly 20% of the state’s coronavirus cases have been confirmed in the last two weeks.

Statewide, the percentage of cases in people in their 20s has increased from 11% in early April to 23% now, according to the release.

There have been 882 confirmed cases of the coronavirus in Rock County and 24 deaths, according to the health department.

There are 202 active cases in the county and 674 people have recovered.

As of Thursday afternoon, four people were hospitalized with the virus across the county’s four hospitals.

Rock County has seen more outbreaks at businesses and cases associated with gatherings since businesses began reopening at the end of May, Cordova said.

Phase two of the county’s reopening plan recommends most businesses operate at 50% capacity, gatherings be limited to 25 or fewer people, and senior centers and nursing homes remain closed.

The Gazette has filed an open records request with the state Department of Health Services to learn what facilities have been investigated by the state for coronavirus outbreaks. The request is pending.

“You don’t get this virus if you stay at home and distanced from others,” Cordova said. “The more people that you are in contact with, the greater chance you may get the virus and continue passing it to others.”

As the holiday weekend kicks off, local officials said people need to be cautious as they celebrate Independence Day.

Epidemiologist Nick Zupan said people should limit travel, especially to places where there have been spikes in coronavirus cases.

Cases have been spiking across the state and in Texas, Florida, California and Arizona.

Monday marked a tie for the largest daily increase in confirmed coronavirus cases with 41 new positive test results reported, matching the high from May 21.